On January 1, 1898, Richard Lafayette II and Della Colista Pilcher welcomed their son Luther Wade Pilcher in Dothan, Alabama. The Pilcher household included Luther’s older brother Woodfin Doyle along with his younger siblings James Byrd, Della Gladys, and Elizabeth (Dixie). Still residing in Dothan according to the 1900 Census, the Pilcher family owned a home where Pilcher’s father Richard worked as a house carpenter. Bercie Brown, a fourteen-year-old African American servant, also resided within the household. By 1910, the Pilcher family moved to the Florida Panhandle and settled in Noma, Florida, where the family rented their home and Pilcher’s father owned a general merchandise store. Bessie G. Gregory, a twenty-four-year-old literate African American woman also resided in the household as the family cook.1 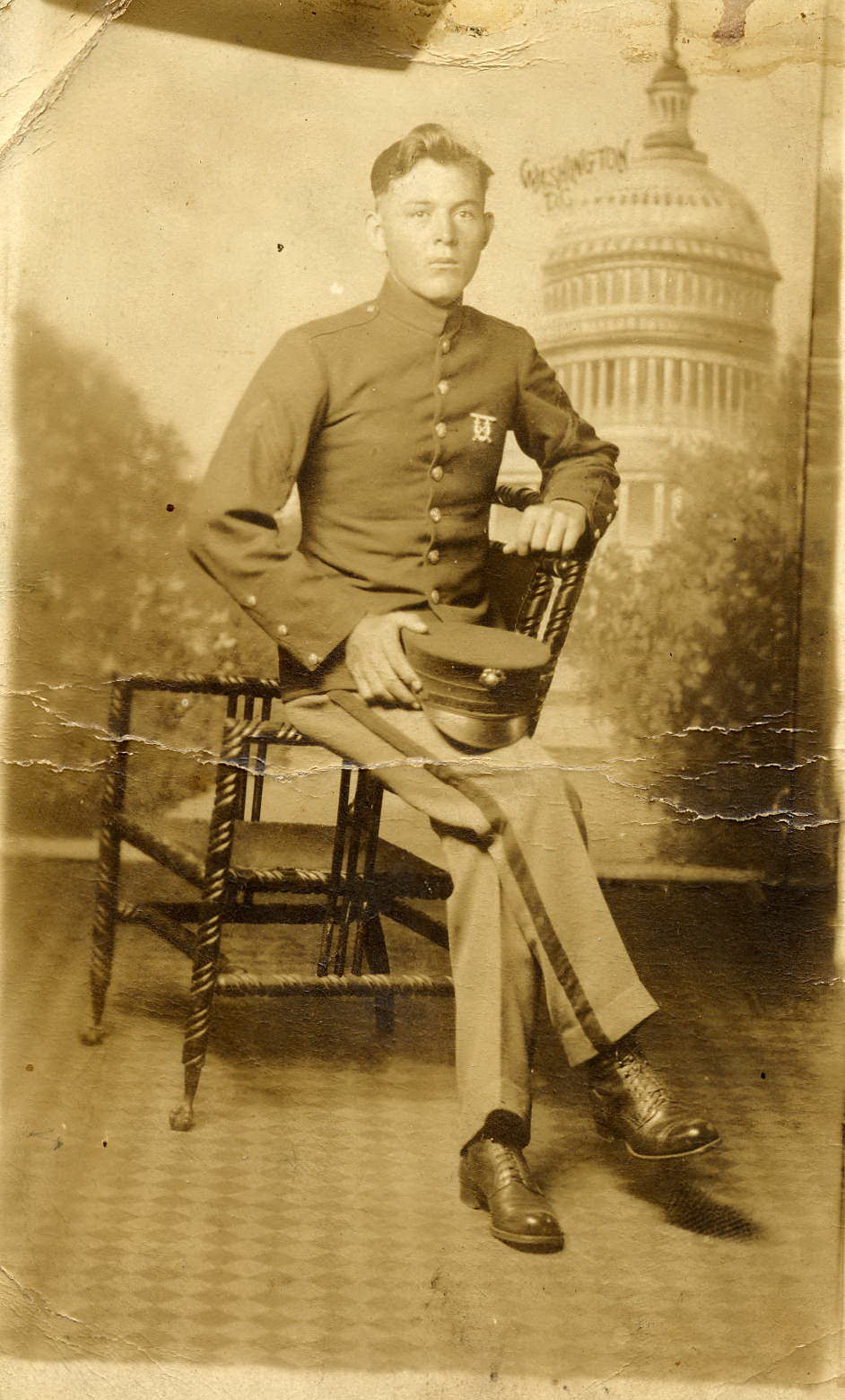 Two years after his mother’s passing, Pilcher, as pictured here, enlisted in the US Marine Corps in Birmingham, Alabama, on April 27, 1915 at the age of seventeen. Pilcher listed his birth year as 1897, as the Marines enlistment age was eighteen or older.2 On May 4, 1915, Pilcher deployed to the Marine Barracks Navy Yard in Norfolk, Virginia, training with Company I until August.3 On July 28, 1915 after the assassination of the Haitian president in 1915, the seventh consecutive president assassinated or overthrown in four years, President Woodrow Wilson sent the US Marines to Haiti to restore order. Pilcher, as part of the 2nd Regiment, deployed to the capital Port-au-Prince aboard the USS Connecticut, landing on August 4.4 Haiti, the former French slave colony, gained its independence in 1804. Yet Haiti’s indemnity debt to the French and other Western powers along with political uprisings caused continuous instability in the country.5

US involvement in Haiti centered around protecting American commercial and political interests, enforcing American hegemony over the Western Hemisphere, and paternally viewing people of color as incapable of governing themselves. The US sought to transform Haitian society by a forced treaty giving the US control over Haiti’s finances and military along with electing a pro-American president. Pilcher and other initial Marine units played a crucial part in enforcing and carrying out this task.6 Yet negative interactions between Haitians and Marines arose the moment Pilcher and the 2nd Regiment arrived at Port-au-Prince; the Marines confiscated local Haitians’ weaponry and enforced curfew. Tensions continued throughout the US occupation, which lasted until 1934. Many Haitians viewed the US as an invading power. Additionally, while some Marines formed genuine relations with Haitians during their tenure, including learning Haitian Creole, others, especially white Southerners, resented their assignment due to their deeply entrenched racial stereotypes about Haitians’ inferiority. As part of the initial force to Haiti, Pilcher played a role in training and supervising the Haitian Gendarmerie, an armed police force made up of US citizens and Haitians responsible for maintaining law and order in Haiti after the Marines left.7

In February of 1917, not far from where Pilcher was stationed in Haiti, an insurrection broke out in Cuba over the reelection of President Mario García Menocal of the Conservative Party. The Liberal Party, led by José Miguel Gómez, opposed the results and plotted a revolution, hoping the US would intervene to give them power in Cuba. Gomez and other Liberal leaders threatened to burn sugarcane fields, impacting American property owners in Cuba. As a result, the US denounced the revolution and announced its support for the Menocal administration. Officially responding to requests for protection from US property owners, small detachments of Marines and sailors deployed to Cuba to maintain order. On March 4, the Marines formed a six-company battalion out of Haiti and after sixteen months, Pilcher, as part of the 20th Company Provisional Battalion, deployed to Cuba aboard the USS Hancock to Guantanamo City. He helped to defend American interests such as protecting the water supply to the naval base in Guantanamo. Shortly after the US declared war on Germany on April 6, 1917, however, the Marine Corps recalled forces from Cuba with Pilcher and his unit returning to the Marine Barracks in Quantico, Virginia, aboard the USS St. Louis in May.8

On May 16, 1917, Secretary of War Newton Baker requested President Wilson raise a regiment of Marines, organized as an infantry to accompany the first element of the American Expeditionary Force (AEF) to France. Despite General John Pershing’s desire for a unified American Army, with Wilson’s approval, Pilcher and his fellow Marines fresh from Haiti and Cuba, along with other Marine reserves, organized to form the 5th Regiment of US Marines on June 7.9 At Quantico, Pilcher and nearly 30,000 Marines trained as part of the Overseas Depot, conducting bayonet drills and grenade throwing, along with experiencing trench warfare by constructing trenches, laying and cutting barbed wire, and learning signaling, message carrying, and first aid. On May 18, 1917, Pilcher received a promotion to the rank of corporal and the Marines granted him a leave of absence from June 7 through June 25, which many service members used to visit their families before returning to duty. On July 31, 1917, Pilcher and the 5th Regiment boarded the USS Henderson headed to Philadelphia, Pennsylvania, the final stop before joining the war effort in France. On August 1, Pilcher received another promotion as a sergeant. After leaving Philadelphia on August 5 aboard the USS Henderson, Pilcher and his unit arrived in Saint-Nazaire, France on August 20.10 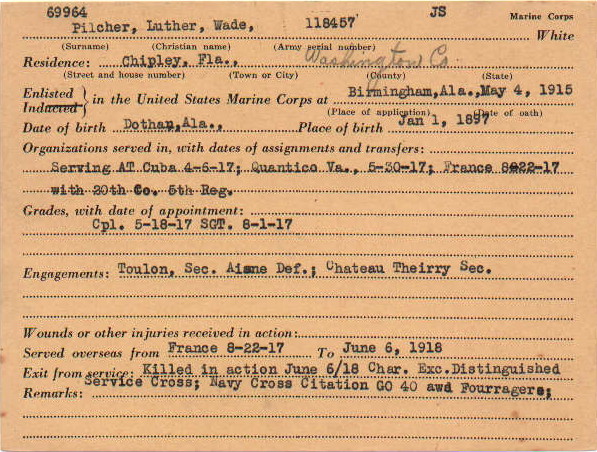 As we can see from his service card, Pilcher trained and worked in France, near the southern city of Toulon, before going into battle in 1918.11(Figure 2: Pilcher’s WWI Service Card) Upon arriving, the regiment’s responsibilities included working as stevedores tasked with unloading vessels arriving on the shores in France. Despite gaining the opportunity to attend specialist schools, many Marines experienced constant disruption to their training for duty assignments because as service troops they were called upon to guard existing and newly forming army installations. From February 24 through March 25, 1918, Pilcher took advantage of his training to attend the School of Musketry. Finally by March of 1918, the Marines, including Pilcher’s 5th Regiment, received combat duty beginning in the Verdun Sector.12

In the Spring of 1918, the Germans launched a major offensive to exploit their advantage in manpower against the British and French; they hoped to end the war before the American forces could make a difference. The early attacks proved successful as the Germans broke through major trench lines and by May, the Germans came within thirty-five miles of Paris at Belleau Wood. American forces, including Pilcher’s unit, played a vital role in the counteroffensive with the French and British.13 General Pershing sent in US forces, including the 5th Marine Regiment, to halt the German advance in the heavily entrenched forest. As retreating French troops encouraged American forces to turn around, the US forces, especially the Marines hungry for action, pressed forward to engage the German forces in early June 1918. On June 6, the 5th and 6th Marine Regiments, along with the 6th Machine Gun Battalion, began their assault on Belleau Wood. In order to reach the Wood, the Marines waded through waist high wheat fields. This proved to be the costliest day in the Marine Corps’ 142 year history, with the Corps suffering 1,087 casualties. Sergeant Pilcher was among those who fell on that day. Pilcher’s comrades persisted and on June 26, the Marines reported, “Woods Now U.S. Marine Corps Entirely,” having stopped the German advance in a battle that became a defining point in Marine history.14

For his service and sacrifice, the military posthumously awarded Luther Pilcher the Distinguished Service Cross and the Navy Cross, the second highest military decoration for the US Army and Navy respectively, for extraordinary heroism in conflict against an opposing force. Additionally, he also received the French Fourragere, awarded by the French government to the 5th and 6th Marine Regiments for their actions in France during the war.15 Pilcher is buried at the Aisne-Marne American Cemetery at Plot B Row 10 Grave 68, in Belleau, France.16 Luther Wade Pilcher left a remarkable legacy of service to this country in the United States, Haiti, Cuba, and France.

5 At the turn of the twentieth century, the US replaced France as Haiti’s chief trading partner, though German merchants’ success in integrating within Haitian families and society worried American merchants. See Jennifer Bauduy, “The 1915 U.S. Invasion of Haiti: Examining a Treaty of Occupation,” Social Education 79, no. 5 (October 2015): 244–245, https://www.socialstudies.org/publications/socialeducation/october2015/the_1915_us_invasion_of_haiti_. For an overview of the end of French rule in Haiti, see Jeremy Popkin, You Are All Free: The Haitian Revolution and the Abolition of Slavery (Cambridge, MA: Cambridge University Press, 2010).

11 Clark, Devil Dogs, 28; "The strength of the 5th Regiment when it arrived in France was seventy officers and 2,689 men. Thirty-four percent of the Marines were 'old-timers,' in that they had more than one year of service. Twelve percent had four or more years' service. No other regiment of the AEF had that much seasoning." See Edwin Howard Simmons and Joseph H. Alexander, Through the Wheat: The U. S. Marines in World War I (Annapolis: Naval Institute Press, 2008), 56.