By John Russell and Jim Stoddard

In the late 1890s, Leo volunteered to serve aboard a tugboat that ran the Spanish blockade of Havana Harbor.4 Before the Spanish-American War in 1898, Cuban exiles and American citizens operated a gunrunning campaign to supply Cuban insurgents.5 It is likely that this is the type of cargo that Leo’s vessel smuggled through the blockade.

After the war with Spain ended, Leo rejoined his family. By 1900 they lived in St. Petersburg, FL.6 Over the next few years, Leo worked as a sailor and fisherman in the area’s booming fishing industry. St. Petersburg experienced significant growth in the fishing business in the late 1880s and the early 1890s. The port processed more than one thousand pounds of fish per day.7 In 1906, Leo married Mary Ellen Vickers in Tampa, FL. Sadly, and for unknown reasons, Mary died after less than two years of marriage.8 A few years later, Leo remarried. On July 7, 1911, he and Elizabeth “Bess” Roundsville married in Hillsborough County, FL.9 Six years later, the Davis family suffered the loss of Leo’s brother Rex, with whom Leo worked at the Gulf Refining Company. In what appears to have been a tragic work-place accident, Rex cracked his skull while serving on a boat as a second mate. He died from his injuries on May 8, 1917 in Port Arthur, TX. It is unclear if the brothers were together when Rex passed.10

In April of 1917, the US entered World War I. On June 1, 1918, at the age of 38, Leo Davis received a commission as a Lieutenant in the US Navy Reserve.11 He likely entered the Navy as an officer because of his previous sailing experience and service during the Spanish-American War. He reported to the Naval Auxiliary Reserve in New York on June 3rd. Then, on June 22nd, he began his service aboard the USS Lykens (SP-876), a 170-foot long, steam-powered tugboat, pictured here.12 Built in 1899 in Philadelphia, PA, she was one of the largest sea-going tugs of the time. The US Navy purchased the Lykens on September 18, 1917.13 The Navy required tugboats for towing and tender/decoy missions. Tender/decoy missions involved a ship traveling with an allied submarine, in order to keep the submarine supplied while also acting as bait to draw out enemy submarines. The Navy commonly disguised the tender ship as higher priority target vessels.14 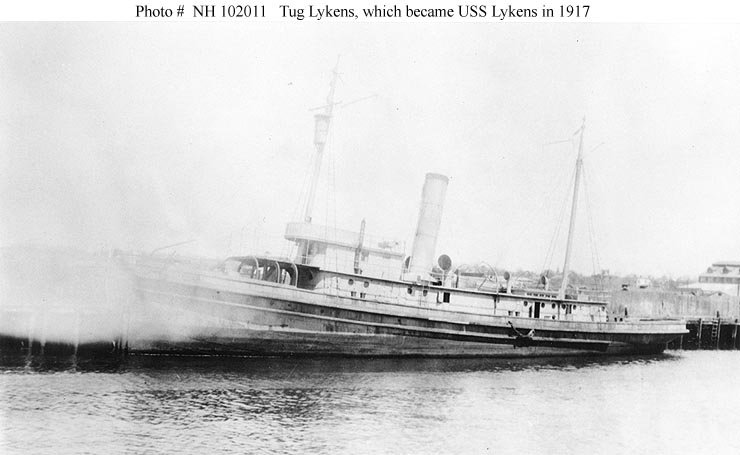 By July 27th, Leo commanded the Lykens, which operated in the northern Atlantic, off the coast of New England.15 While under Davis’ command, the Lykens, along with the USS Charles Whittemore, participated in a tender/decoy mission with two US submarines. The ships convoyed with submarines N-5 and N-6 from New York to Block Island, RI. The Charles Whittemore had the N-5 in tow, while the N-6 moved about under her own power. During the convoy, the N-6’s steering jammed and a collision occurred between the two subs. Unable to make it to Block Island, the Lykens towed the N-6 back to New York for repairs.16

Leo continued to command the USS Lykens and serve in the US Navy through the close of World War I. On April 18, 1919, Leo was discharged from the Navy at the Naval Auxiliary Reserve in New York and returned to Florida.17 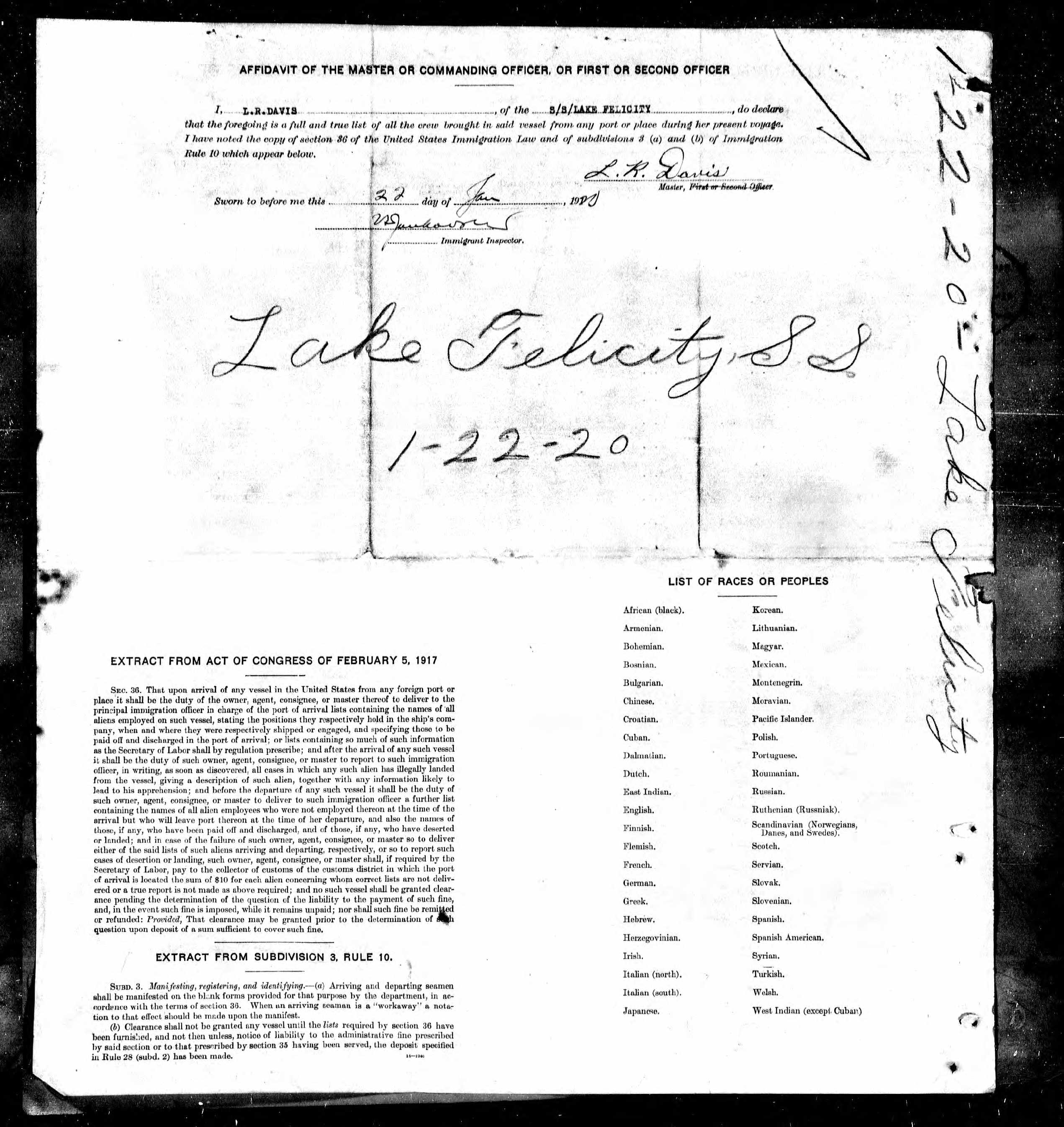 Leo returned to Bess and his life as a civilian sailor. After a life on the sea, Leo earned the title of a master mariner.18 As such, he commanded the SS Lake Felicity, a 250-foot, steam-powered cargo ship, on at least three occasions in 1919 and 1920. Here we see the ship’s manifest with his signature. While in command of this vessel, Leo sailed cargo between New Orleans, various Caribbean Islands, and New York.19 In October 1920, Bess filled out a passport application. She applied for travel to Cuba, one of the places the Lake Felicity sailed to at the time.20 It seems likely that Bess traveled with her husband while he sailed the Caribbean.

While we do not know exactly when or why, by 1929, Leo and Bess’ marriage had ended. On October 28, 1929, in the midst of the stock market crash that started the Great Depression, Leo married Anna Blanche Burnett in Bartow, FL.21 After their marriage, Leo and Anna lived in Gardenville, FL, with Anna’s young son, William, and Leo’s mother, Nora.22 Through the 1930s and early 1940s, Leo and his family continued to live in the Tampa Bay area.23 When the US entered the Second World War, Leo served his country a third time. Stationed in Key West, he piloted US ships through the mined waters around the island. The US placed mines in this area to defend Key West from German U-Boat attacks. Leo ensured that US ships could safely navigate the mined waters.24

In his latter years, this “modern day Ponce de Leon” continued to sail and fish in the Tampa Bay area. He and his family settled on Maximo Point, where they built a home from the local timber. There, Leo and a friend built a 60-foot schooner, likely intended to provide an income through fishing. Unfortunately, before they could set sail, a windstorm hit the area and damaged the ship beyond repair.25

On March 20, 1951, Leo passed away in Bay Pines Hospital, after spending nearly his entire life in the St. Petersburg area. Leo Davis was survived by his wife Anna, his stepson William, his brothers Claude and Herbert, and his mother Nora.26 He is buried in Bay Pines National Cemetery, section 16, row 5, site 11.27

3 “1900 United States Census,” entry for Leo R. Davis. It seems he also had a sister named Georgia (1884) who, sadly, did not appear on the 1900 census. Leo’s father is also absent from this census. It is likely that both Georgia and James passed away prior to 1900.