James Norman Ball was born on November 29, 1890 in College Point, a neighborhood of Queens, NY.1 His father, also James Ball, emigrated from England while his mother, Margaretha Kohlus, came from Germany.2 Gaps in the historical record make it difficult to know the details of his childhood. It is likely that his mother died in 1899 when James was only nine years old.3 After she passed, he lived in an orphanage in Paterson, NJ, where he seems to have attended school.4 By 1910, at the age of nineteen, James lived in the home of William and Sarah Speer in Paterson where we worked as a stenographer. He lived with the Speer family at least through 1911.5

Soon after, Ball moved to Florida, settling in Jacksonville where he met Irene Elizabeth O’Hagan, whom he married on June 21, 1914, just a month before World War I began.6 Born in September of 1890, Irene and her family moved to Florida, residing in Volusia County in 1900. By 1910, Irene and her family moved to Nassau County and like her future husband James, she worked as a stenographer.7 When the US declared war on Germany in April of 1917, James registered for the military draft on June 5 in Jacksonville, only a few weeks after Congress enacted the Selective Service Act on May 18. During this time, Ball continued to work as a stenographer.8

On April 13, 1918, the Army inducted Ball and sent him to train at Madison Barracks, NY. Ball likely arrived as part of the First Company at the Rochester School of Aerial Photography for specialized training in late June 1918.9 Only fifteen years earlier in 1903, the Wright brothers performed the world’s first flight on a wooden biplane.10 Though aerial photography had been used as early as 1909 by Wilbur Wright in Rome, in general it held little appeal because of the weight and bulkiness of aerial camera systems, the jostling that could occur in the air, and the need to be still. The start of the war, however, spurred the industry into developing more efficient, automatic cameras that could operate under the unique circumstances of flying in the air.11 Aerial photography improved military reconnaissance in the twentieth century. For the first time, belligerents could gather intelligence on enemy movements, positions, and battlefield conditions from the air. As air power increased over the course of the war, and by the time the US entered the war in 1917 aerial photography had become a necessity and the US Army quickly trained men to fill this vital role.12

George Eastman, owner of the Eastman Kodak Company, began petitioning the US government to let the Kodak company open a training facility. He felt his personnel and facilities could make a valuable contribution to the war effort.13 Many scientists within Kodak contributed greatly to the effort, even before January 1918, when the War Department opened a school at Kodak Park in Rochester, NY. The paper mill on the premises housed the first incoming class, and other areas within the mill became schoolrooms.14 Eastman loaned these areas to the Army and promised to supply Kodak instructors until soldiers trained at the school could replace them.15

James Ball began his time at the school as a Supply Private, “slinging photographic supplies.”16 During this time, he and his fellow students studied to learn skills necessary to produce useful intelligence. For one, he learned how to operate the complex cameras used for reconnaissance. Large and sensitive, the cameras needed to capture high-quality images from high altitudes without allowing the vibration of the aircraft to interfere with their operation or the clarity of the images.17 To practice with these, classes split their time between the main school at Kodak Park and the nearby Baker Field, located about five miles south of Kodak Park.18 Student photographers rode as passengers in one of three airplanes dedicated to the school for training. Once they shot the pictures, the planes landed and students rushed the film to a mobile lab to develop it. Processing the film took as little as thirty minutes—an extraordinary accomplishment in an era when developing photographs could take days or weeks.19 When not flying thousands of feet above the ground, Air Scouts sat in classes at Kodak Park to learn about film development, mapmaking, and photographic interpretation.20

During their downtime, student-soldiers in Rochester often participated in sports, particularly baseball. They played against each other as well as against soldiers in the nearby Madison Barracks.21 Many of the games appeared in the soldier-run newspaper, The Airscout’s Snapshot. The Snapshot, published weekly on Saturdays, represented one example of the widespread of phenomenon of soldier-managed newspapers.22 Often called trench papers, they circulated amongst soldiers on the front overseas and in camps at home.23 The Snapshot published “short, pointed items, written without malice”—each piece a quick glimpse into the camaraderie and shared experiences of the soldiers.24 The humorous, lighthearted tone of the paper, which featured many jokes about life at the school and other students, gave the men an outlet at the end of every week. Some jokes were targeted at James Ball, as seen here, who Snapshot editors cited as having many “girlfriends” in Rochester, though he also visited his wife in New York City.25

A total of 2,177 soldiers, including Ball, passed through the Rochester School of Aerial Photography.26 Graduates from the Rochester School consisted of a small minority of the total Air Service—just over one percent of 190,000 men. Many of the Rochester graduates went overseas as photographers to aid the Signal Corps, though the American Expeditionary Force (AEF) trained most of its pilots in in France.27 While he did not serve in France, Ball received a promotion to sergeant on November 13, 1918, just two days after the signing of the Armistice. He likely helped to wind down operations at the school, which closed on January 1, 1919. The Army discharged Ball on January 4, 1919.28

After the war, James returned to his wife Irene in Jacksonville and by 1920, James worked selling photographic materials, likely utilizing the training he received at Kodak. Irene’s siblings Joe and Edith O’Hagan also lived with the family in Jacksonville.29 James and Irene had three children: William Edward Ball (1921), Irene Marguerite Ball (1926), and James Thomas Ball (1927).30 Ball later returned to work as a stenographer in Jacksonville by 1924.31 The Ball family eventually moved to the small town of Sebring in Highlands County, FL, about 230 miles from Jacksonville. By 1927, Ball became the court reporter of the Nineteenth Judicial District of Florida, encompassing three counties, including Highlands, in west central Florida.32 He worked as a court reporter in Sebring for twelve years.33

James also participated in the local Elks Lodge, a fraternal order founded in New York City in 1868.38 Ball became an initiated member of the lodge in November of 1926, rising to become an esteemed leading knight in February of 1932. He eventually became the exalted leader of the local lodge.39 Ball also lent his services to the Red Cross in 1932 following a hurricane which affected the Gulf Coast.40 The family, sometime in 1936, moved to Bartow in Polk County, FL where they remained long enough for James to become secretary of the Forty and Eight, another military organization, in September, as well as the executive member of Bartow’s American Legion chapter in October.41 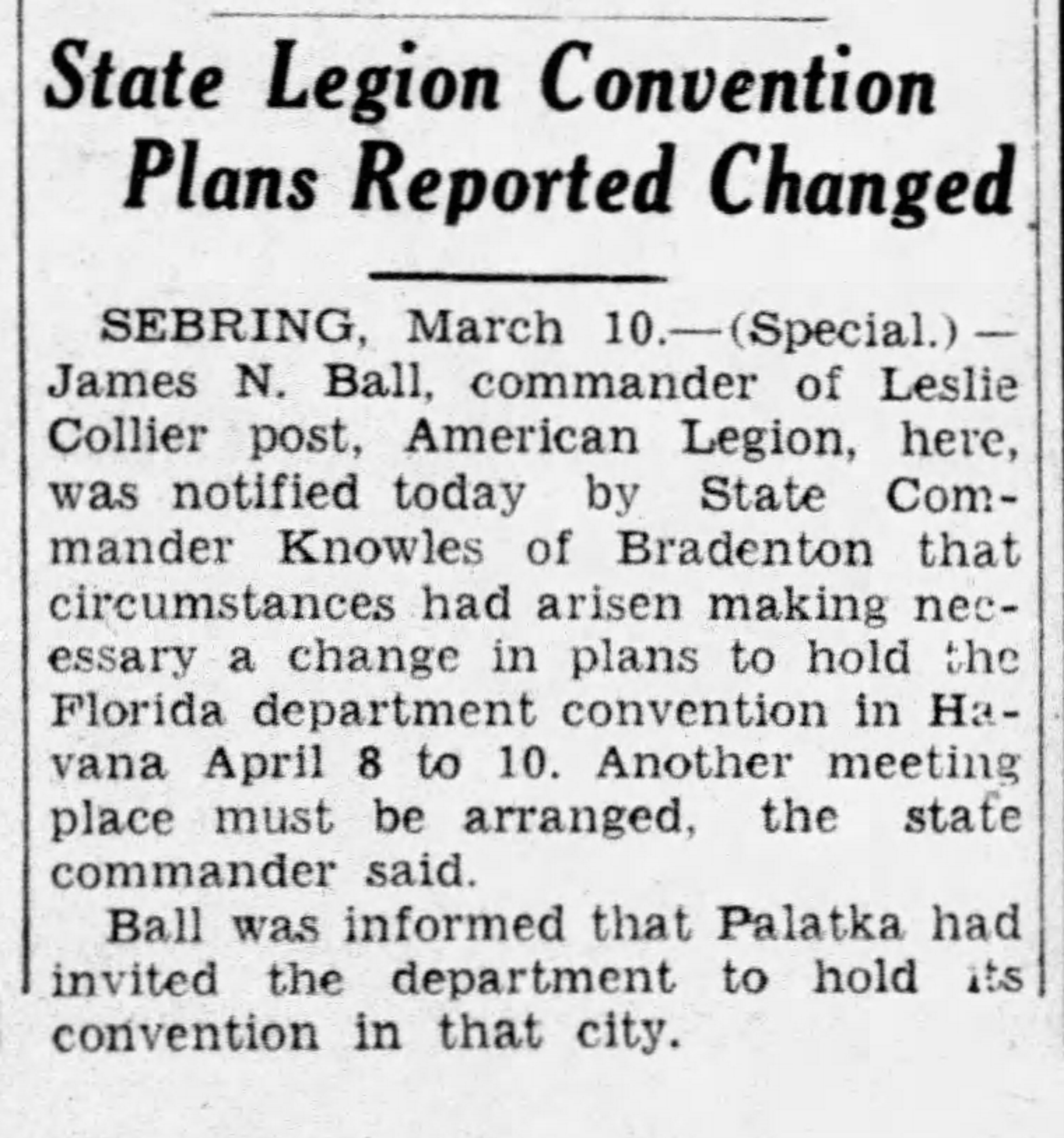 In November of the same year, James and his family made one last move to Tampa. There, James worked at the customs office.42 Given his intense involvement with the American Legion, it is likely he continued to be active in his new community, where he would have known other Legion members. Unfortunately, in January of 1938, James suffered from “apoplexy,” known today as a stroke.43 After spending a month in Bay Pines Veterans Administration Hospital, Ball returned home to recuperate in February, but he returned to the hospital a few months later in June.44 He did not have any meaningful recovery following the 1938 illness and died at 12:30 in the morning on May 22, 1940 at the Bay Pines Hospital.45

Ball is interred at Bay Pines National Cemetery in Section 4 Row 4 Site 16.46 He left behind his wife Irene and his children William, Irene, and James. After James’s death, Irene moved back to Jacksonville and returned to work as a clerk-stenographer.47 Irene remained in Jacksonville until her death on November 7, 1988 at the age of ninety-eight.48 She is buried at Bosque Bello Cemetery in Fernandina Beach in Nassau County, FL.49

34 The Legion especially lobbied for disabled Veterans and Veterans who felt their “mustering-out” bonus could not compete with the wages earned by civilians who had not gone overseas. Keene, World War I, 187-88.

38 “Our Mission,” The Benevolent and Protective Order of Elks of the United States of America, accessed October 2, 2019, https://www.elks.org/who/missionStatement.cfm.