By Benjamin Aubrey and Kayla Campana

Jane “Jennie” Margaret Gadde was born on August 17, 1888 in Ludington, MI, to European immigrants Nels Gadde (Sweden) and Carrie Johnson (Norway).1 Gadde grew up the second oldest of four sisters, Hattie (1887), Jane (1888), Clara (1889), and Myrtle (1900).2 The family lived in Ironwood, MI, where Nels worked as a foreman for an ice yard and Carrie raised their children.3 The family moved in June 1905 to Sanborn, WI, where Jane’s father worked as a foreman at a lumber mill.4

Unlike most women in the early twentieth century, Gadde had the opportunity to attend a professional school, likely with the support of her parents. She attended the Ferris Institute, graduating in 1907.5 The Ferris Institute, known today as Ferris State University, was, at the time, an industrial school in Big Rapids, MI, opened by Woodbridge Nathan Ferris and his wife, Helen Frances Gillespie Ferris. The school sought to train both men and women, who lacked educational opportunities early in life, in practical skills. Helen Ferris, a woman who understood the importance of education for everyone, encouraged students to gain helpful skills that made a difference in people’s lives.6 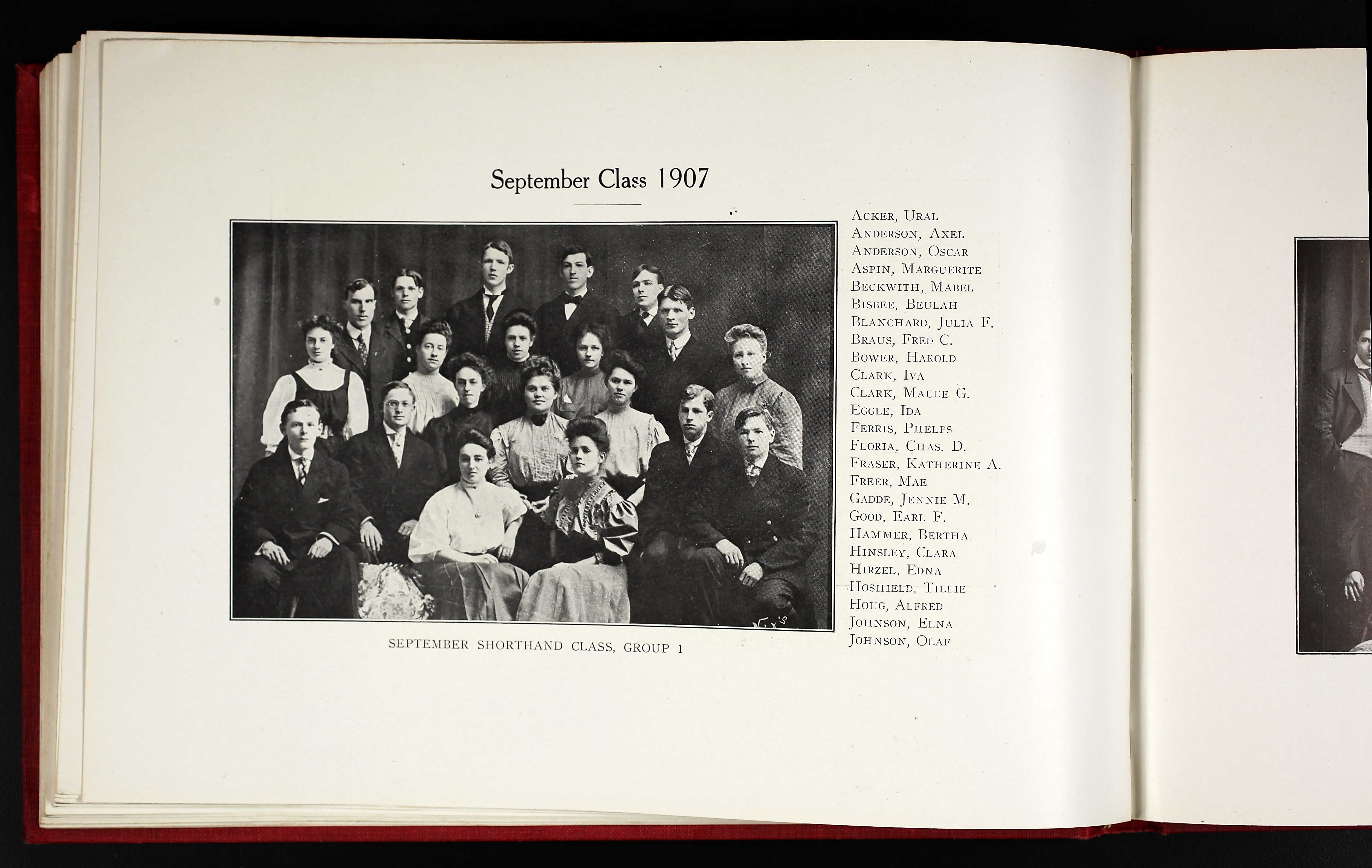 Yearbook photo of Jane Gadde and her shorthand class

Gadde earned a degree in shorthand. She is seen here with her class.7 Shorthand is a technique using abbreviations and symbols to type or handwrite orally dictated information, allowing court reporters, or secretaries in banks and other office settings to keep accurate records of meetings and type up letters or reports. Having this professional skill allowed women like Gadde to live independently, in a career suitable for women at the turn of the twentieth century.8

Gadde enlisted in the US Army Nursing Corps (ANC) on October 2, 1918.11 The US Army Medical Department established the ANC under the Army Reorganization Act on February 2, 1901.12 When the US entered World War I, the ANC had only 403 nurses on active duty with 170 reserve nurses. By the end of the war, the ANC had over 20,000 in their ranks.13 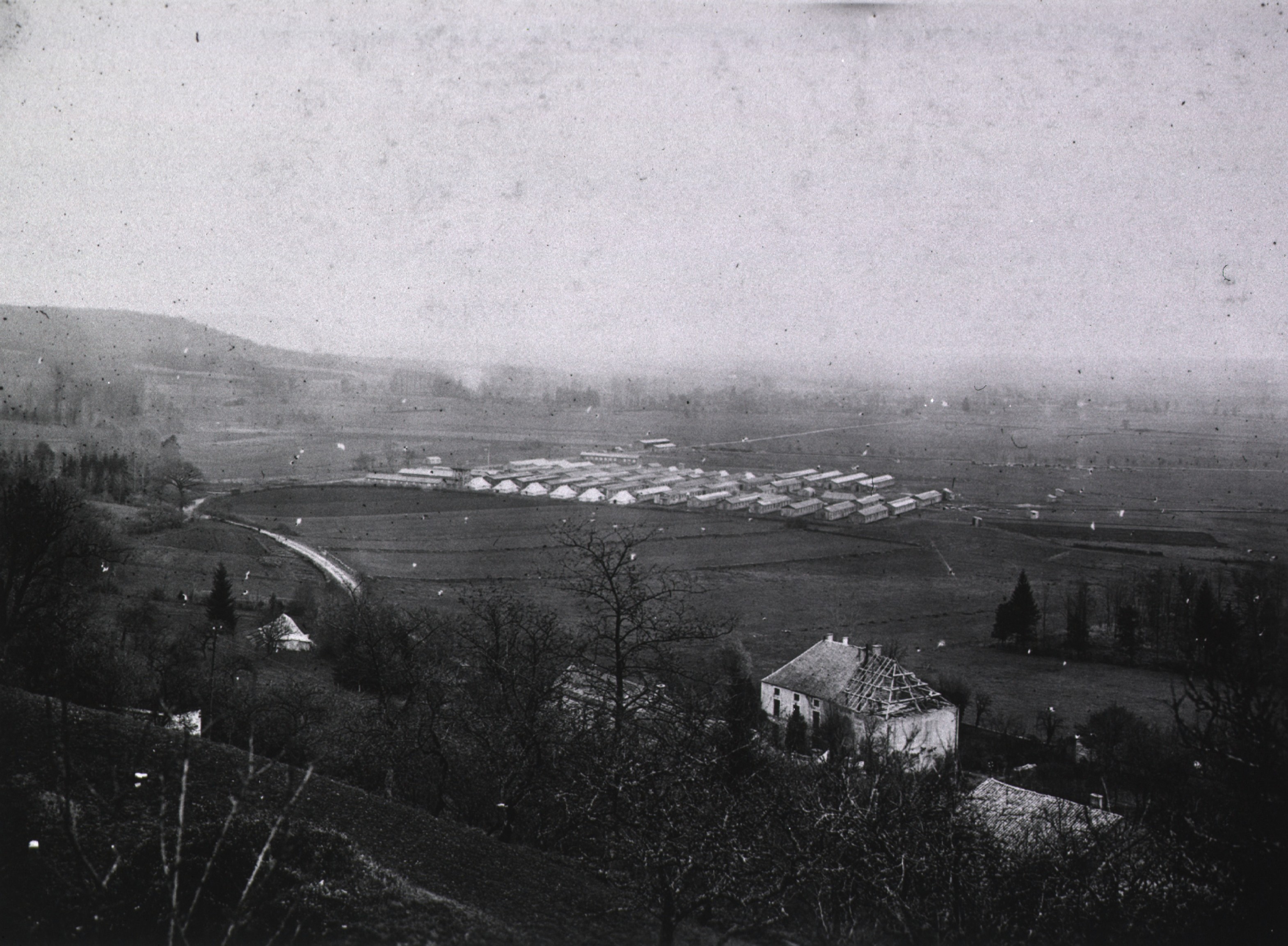 Image of Base Hospital 117

Upon enlisting, Gadde trained at the US Army Base Hospital at Camp Mead, MD, assigned to Psychiatric Replacement Unit No. 2.14 Gadde embarked from Hoboken, NJ to Brest, France on the passenger ship, USS Northern Pacific on November 12, 1918, the day following the Armistice.15 Even though the war was over, Gadde served as a nurse for roughly eight months. She worked in the Psychiatric Replacement Unit No. 2 deployed at Base Hospital No. 117, pictured here, in LaFauche, in Haute-Marne, about one hundred miles south of what had been the front lines in northeastern France. There, Gadde treated soldiers suffering from psychiatric ailments, including shell shock.16 Shell shock, also known as war neurosis at the time, and now known as Post-Traumatic Stress Disorder (PTSD), was a complex ailment associated with psychological war-related trauma. Early on, doctors and other medical professionals believed shell shock came from the physical shock of an exploding shell; however, as more cases poured in and doctors studied and treated patients, it became clear that shell shock, which encompassed numerous emotional states, resulted from a range of traumatic experiences.17

Gadde’s service reinforced the concept of the ideal patriotic woman serving her country, as a nurse, who like a mother, wife, or sister, cared for men.18 Gadde, along with fitting this ideal image of womanly duty, was also a role model for women. As a trained nurse, she became a medical professional who gained experience working with psychological trauma. Gadde served in France until July 30, 1919, when she boarded the USS Leviathan in Brest, France and arrived in Hoboken, NJ on August 6, 1919. Shortly after arriving in the US, Gadde was honorably discharged from the ANC.19

Gadde returned to Chicago following her service in France, where she worked at the Cook County Public Hospital as a nurse until 1942.20 In 1942, shortly after the US entered World War II, she enlisted again as a nurse in the ANC.21 The US took over parts of Panama in 1903 to construct the Panama Canal, which connected the Atlantic and Pacific Oceans and allowed the US to control international trade in the Western Hemisphere.22 Gadde worked in the Gorgas Hospital in the Panama Canal Zone (PCZ). During World War II, the Gorgas Hospital treated patients for tropical diseases such as yellow fever.23 Gadde remained in the PCZ until 1947, returning to the US in September on the USS ANCOM before being honorably discharged from the ANC for the second time.24

Gadde moved to St. Petersburg, FL, following her service in PCZ. She volunteered for the Jane A. Delano American Legion Post #122.25 Named after one of the most well-recognized nurses in US History, and originally located in St. Petersburg, the Delano Legion post, founded in 1919, was one of only nine named for nurses in the US after World War I. Delano served as the superintendent of the ANC and the US Surgeon General’s Office, and as the Chair of the American Red Cross Nursing Service in 1909.26 A statue of her, dedicated in 1934, overlooks the nurses’ section in Arlington National Cemetery, where she too is laid to rest.27 Gadde likely joined the Legion to find comradery, and because the premier Veterans’ organization recognized nurses as Veterans at a time when women did not have a collective recognition of their military service.28 Given her service in both World War I and World War II, it is not surprising that Gadde played an active role in the Delano American Legion. She held numerous positions of leadership, including Historian (1951), Adjunct (1952), Sergeant-in-Arms (1953), Senior Vice Commander (1954), Secretary (1955-56) and Service Officer (1957).29 Gadde received a certificate to celebrate fifty years of service in 1958.30

Gadde also participated in the Panama Canal Society in Florida in the 1950s. The Society, which remains active today, consists of former employees of the PCZ who advocate for PCZ employees and for American interests in the Canal Zone.31 Possibly as part of her involvement with the Society, or to visit friends, Gadde made trips to the Canal Zone in 1956 and 1960.32

8 Carole Srole, Transcribing Gender and Class: Masculinity and Femininity in Nineteenth-Century Courts and Offices (Michigan: The University of Michigan, 2010), 11.

12 Lisa M. Budreau and Richard M. Prior, Answering the Call: The US Army Nurse Corps, 1917-1919: A Commemorative Tribute to Military Nursing in World War I (Falls Church, Virginia: Office of the Surgeon General, US Army, 2008), 3.