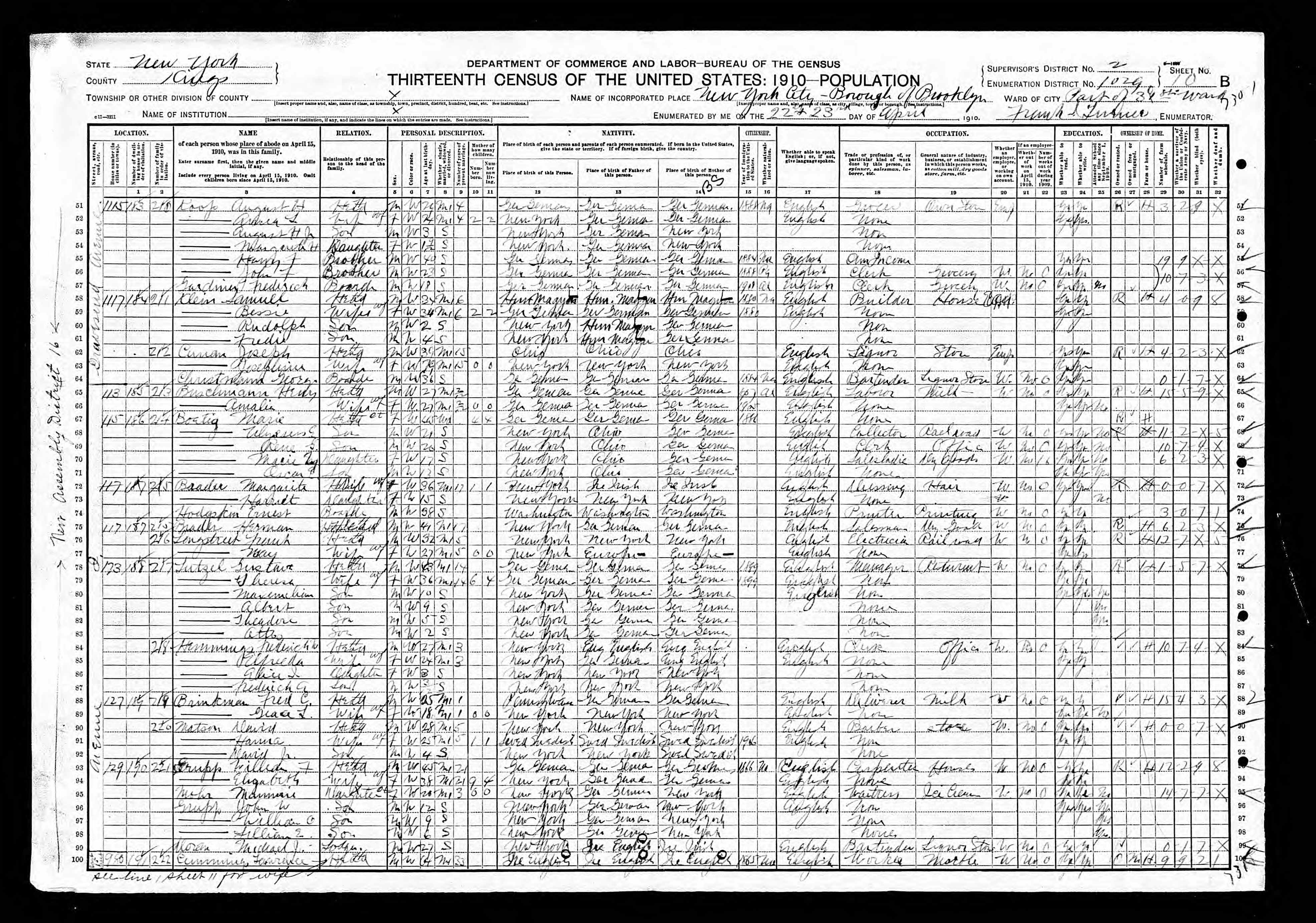 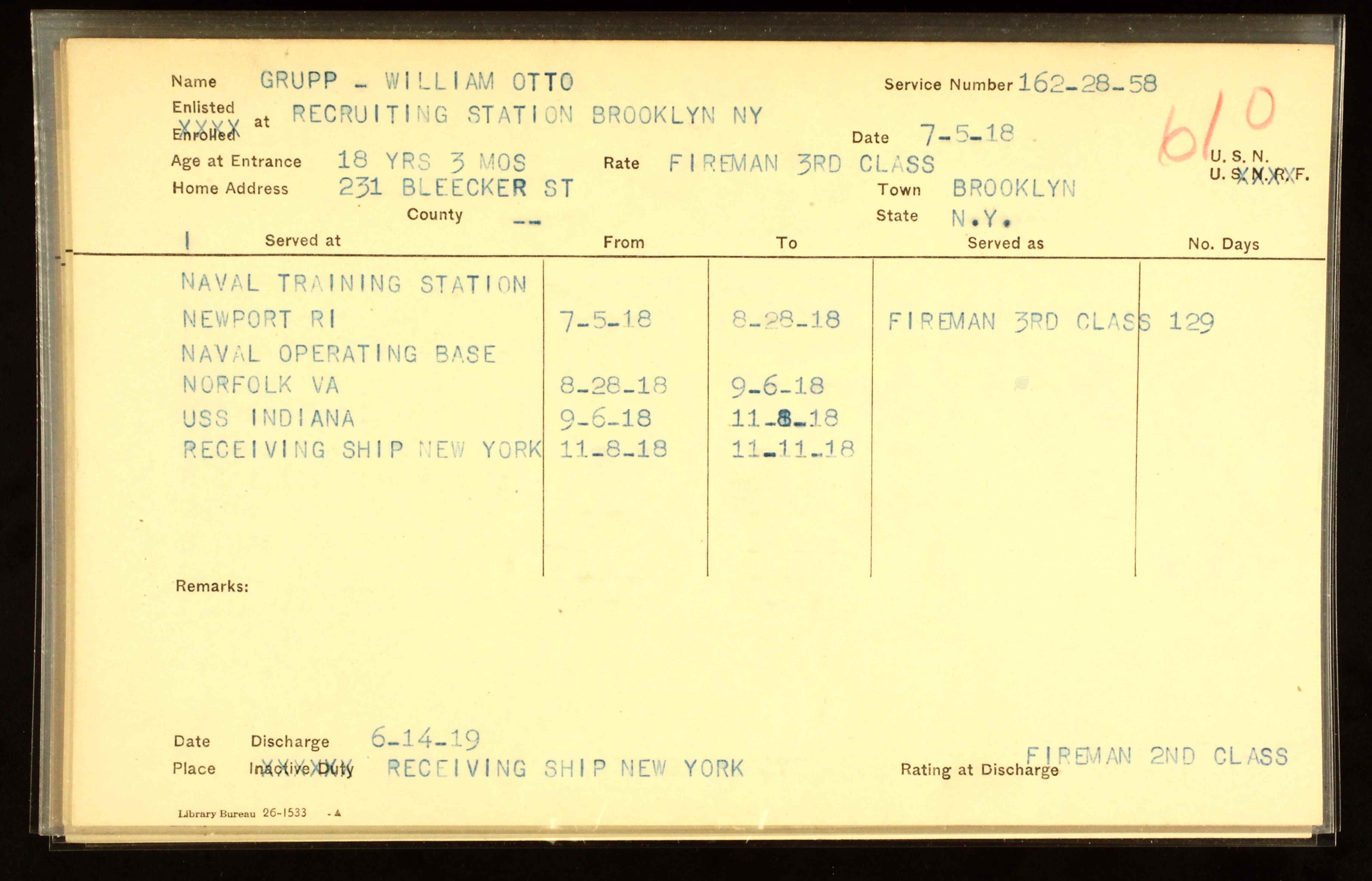 On July 5,1918, William Otto Grupp began his service in the United States Navy at the age of eighteen.5He was discharged on June 14, 1919.6Fireman Second Class Grupp served in several locations, as seen here on his service card. He was stationed in Newport, Rhode Island from July 5, 1918 to August 28 as a Fireman Third Class, then on a naval base in Norfolk, Virginia from August 28, 1918 to September 6, where he was promoted to Fireman Second Class. According to his granddaughter, Denise Surdukowski, Grupp’s wartime service included working in an infirmary and, on one occasion, helping to transport mules.7Starting in September 1918, Grupp served on the USS Indiana until November 8, 1918. The USS Indiana, a training ship, stayed off the US coast in places like Tomkinsville, New York and the York River, Virginia.8He then transferred to a receiving ship in New York, where he remained until his discharge on June 14, 1919.9

The Grupp family chose to keep their German name at a time of strong anti-German sentiment in America. Historian Peter C. Weber states that as the American homefront sought to “eradicate” German culture, German-Americans either de-Germanized or stuck together.10Historian Frederick C. Luebke elaborates further that German-Americans reacted in several ways to American “superpatriotism.” Some celebrated their German heritage, while others hid it. Luebke concludes that “most Germans in America held attitudes somewhere between the pro-German and superloyalist extremes.”11William Grupp and his family’s decisions seem to support this conclusion. The Grupp family did not change their name to a more “American” one. At the same time, they were Americans and William’s decision to serve in the military may well have been in part been inspired by a desire to show that German-Americans had pride in and felt a responsibility towards their American identity too.

William married Katherine Riebling in 1921 in New York. Katherine, born August 8, 1901 in Queens, New York, became a packer in a knitting house by 1920 and was living with her brother-in-law.12By 1925, she and William had their own home.13The couple had two daughters, Katherine (1923), and Dorothy (1925). At some point in the 1920s, Katherine started work as a janitor while William drove a truck for Borden’s Milk.14During the Great Depression, Katherine’s brother John Riebling lived with them.15

At some point after 1940, William took a job with Schlitz Beer. The brewery, founded in 1849, became renowned as “The beer that made Milwaukee famous.”16By 1950, it was the best-selling beer in the United States.17William remained with the company until he retired.18

William died November 17, 1988 in Hudson, Pasco County, Florida,19followed by Katherine Grupp in February 24, 1991.20Both are buried in the Florida National Cemetery. Their daughters, Katherine and Dorothy, are the Grupps’ Legacy.21Schlitz Beer was on the decline by 1970 as an independent company, and was ultimately acquired by its rival, Pabst Brewing Company, in 1999.22The Grupp legacy continues with William and Katherine’s grandchildren who cherish their grandparents’ memory.