By Kyle West and Luke Bohmer

Alexander Lard Lucas was born in Satilla Mills, Camden County, Georgia on June 6, 1893 to Alexander Lucas Sr. and Rhonda Luke. Alexander likely worked hard in his early years as the Lucas family worked as farm laborers, a common yet difficult way for African Americans to earn a living in the rural south. As with many farming families, the Lucas family was quite large. Throughout his early life, Lucas lived with his father and two older sisters, Dicy (1888) and Kissie (1882), shown here in the 1900 census.1 By 1900, Alexander Sr. and Rhonda Lucas’ six oldest children had already moved out.2 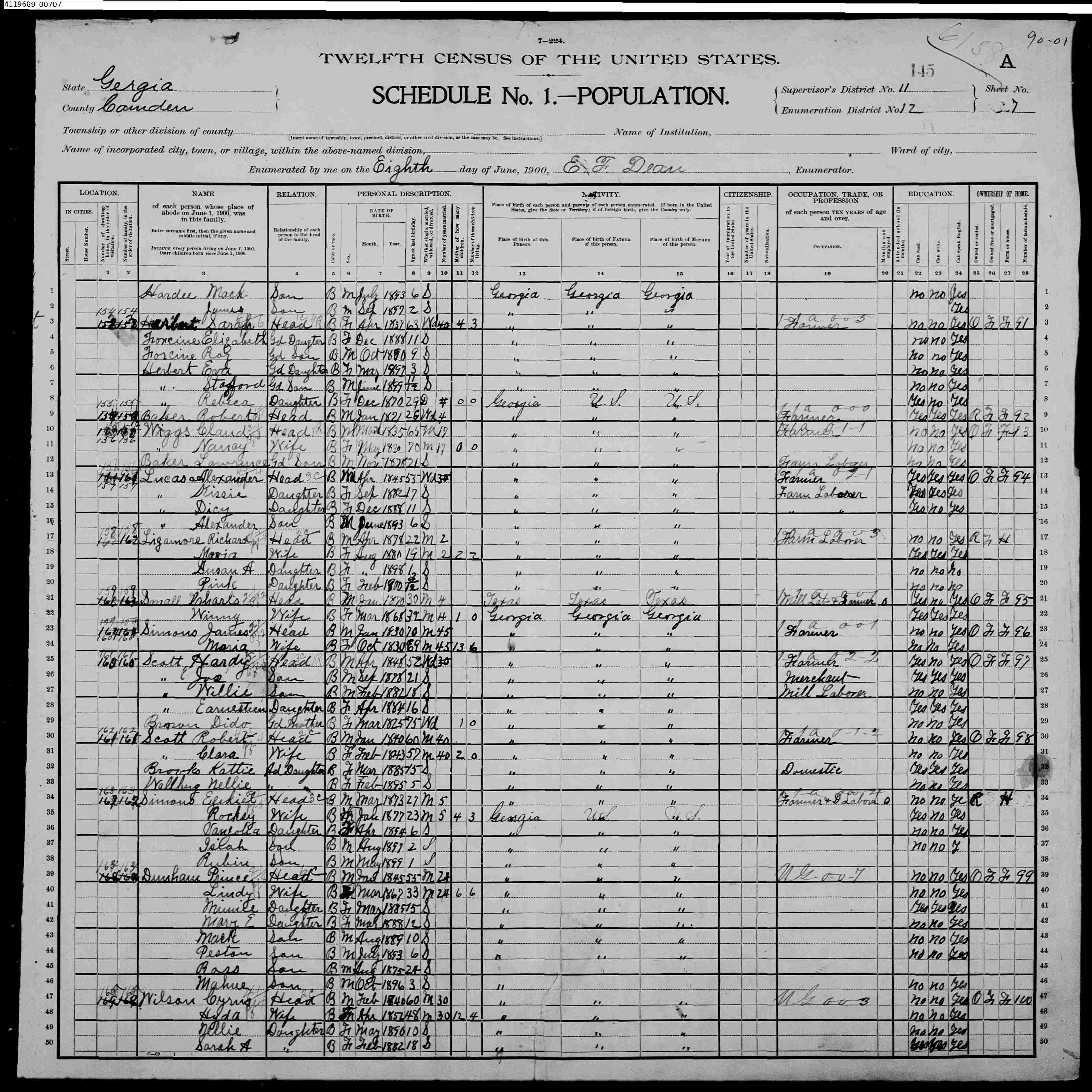 While still only a teenager, Alexander Lucas moved across the Georgia state line to Jacksonville, Florida where he resided with his uncle, Oscar Luke, and his cousin Charlie Gream.3 By 1918, Lucas had moved to Cleveland, Ohio, in order to pursue a career as a mechanic.4 In the early twentieth century, Cleveland became a hub for the burgeoning automotive industry, creating a wealth of industrial jobs and opportunities. Alexander Lucas was one of thousands of southern blacks who migrated to Cleveland, quadrupling its black population between 1910 and 1920.5 This vast exodus of African Americans from the South around this time is known as the Great Migration. From 1910 to 1970, more than six million African Americans moved to northern cities to escape the Jim Crow South and participate in America’s expanding urban manufacturing industries.6 In June 1918, he married Anna Thurman.7

After only a few months as newlyweds, the US Army conscripted Lucas on August 9, 1918—one of nearly 368,000 other African Americans. While we do not know the details of Lucas’ service, he rose in the ranks to the position of sergeant, a remarkable achievement for an African American in the segregated US Army. To appease white fears about arming blacks, 89 percent of African Americans served in units assigned to support roles such as constructing fortifications, burying bodies, and manning supply caravans. The 11 percent of African Americans who saw combat in the 92nd and 93rd Division became world renowned for their tenacity and effectiveness. Still, African Americans in the military faced open and relentless discrimination by their compatriots and superior officers.8 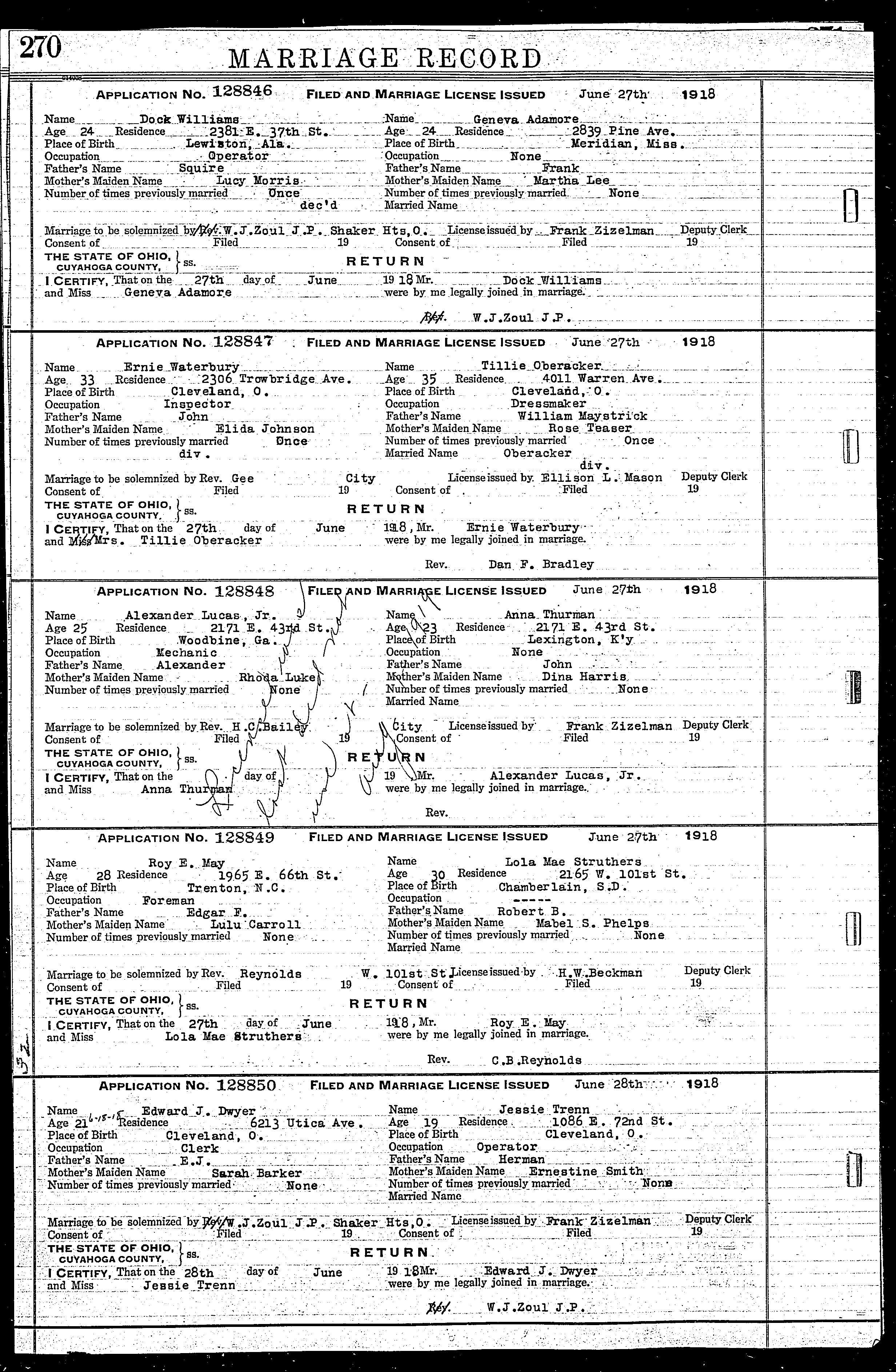 Alexander Lucas returned to the Midwest following the war. He found a job as a tailor in Lansing, Michigan, roughly 240 miles northwest of Cleveland. Sometime between 1918 and 1920, Lucas and Anna divorced and he remarried Willetta J. Farris, a Cleveland native.9 By 1930, Alexander had divorced again and lived alone in Dayton, Ohio, working as a grocer.10

The onset of World War II provided job opportunities for many World War I veterans. In 1940, Lucas found a position as a shipping clerk for the Department of the Interior in Washington, DC. He lived in federal public housing attached to the North Interior Building in downtown Washington, where he worked.11 Franklin D. Roosevelt’s New Deal likely made his employment possible. One of its provisos created incentives to hire African Americans for government positions. Between 1933 and 1941, the number of black federal workers had tripled as a result of the Works Progress Administration (WPA), and one million more African Americans found employment in public works projects thanks to this initiative.12

We have fewer records for the second half of Lucas’ life. Between 1942 and 1989, he moved to the Miami area, where he passed away on March 2, 1989 at the age of ninety-five and he was interred in Florida National Cemetery.13 Alexander Lucas’ life was indicative of many of the hardships and opportunities that African Americans experienced during the first half of the twentieth century. From being born on a small farm in rural Georgia, being one of the hundreds of thousands of African Americans who left their homes to find opportunities in the Midwest, as one of the 380,000 African Americans who participated in the First World War, and earning a position in the federal government, his life illustrates the tribulations as well as triumphs of African Americans in the early twentieth century.

8 Gail Buckley, American Patriots: The Story of Blacks in the Military from The Revolution to Desert Storm (New York: Random House, 2001), 163-70.