On August 4, 1899, Charles and Katherine Phelps gave birth to Nelson Oren Phelps in the city of Gouverneur in Saint Lawrence County, New York.1 Phelps’s father Charles also originated from New York, while his mother Katherine’s family came from Ireland.2 Though various Irish people immigrated to the American colonies and later the United States, the most significant emigration from Ireland occurred amid a devastating potato famine in the mid-1840s. Between 1846 and 1851, an estimated one million Irish arrived in the United States and by 1860, the Irish comprised nearly half of New York State’s foreign born population, and they were the largest immigrant group in Saint Lawrence County.3

Phelps spent the first few decades of his life in Gouverneur. He grew up with his older brother Herbert, sister Ella, and his younger brother Charles.4 The 1905 New York State Census shows a young Phelps at age six too young for school, and his father Charles employed in the hotel business.5 By the 1910 Census, Charles continued working as a hotel bartender while Nelson’s brother Herbert worked as a laborer. Phelps’s mother Katherine maintained the home as a housewife while ten-year old Nelson studied at school.6

Service: Phelps in the Navy 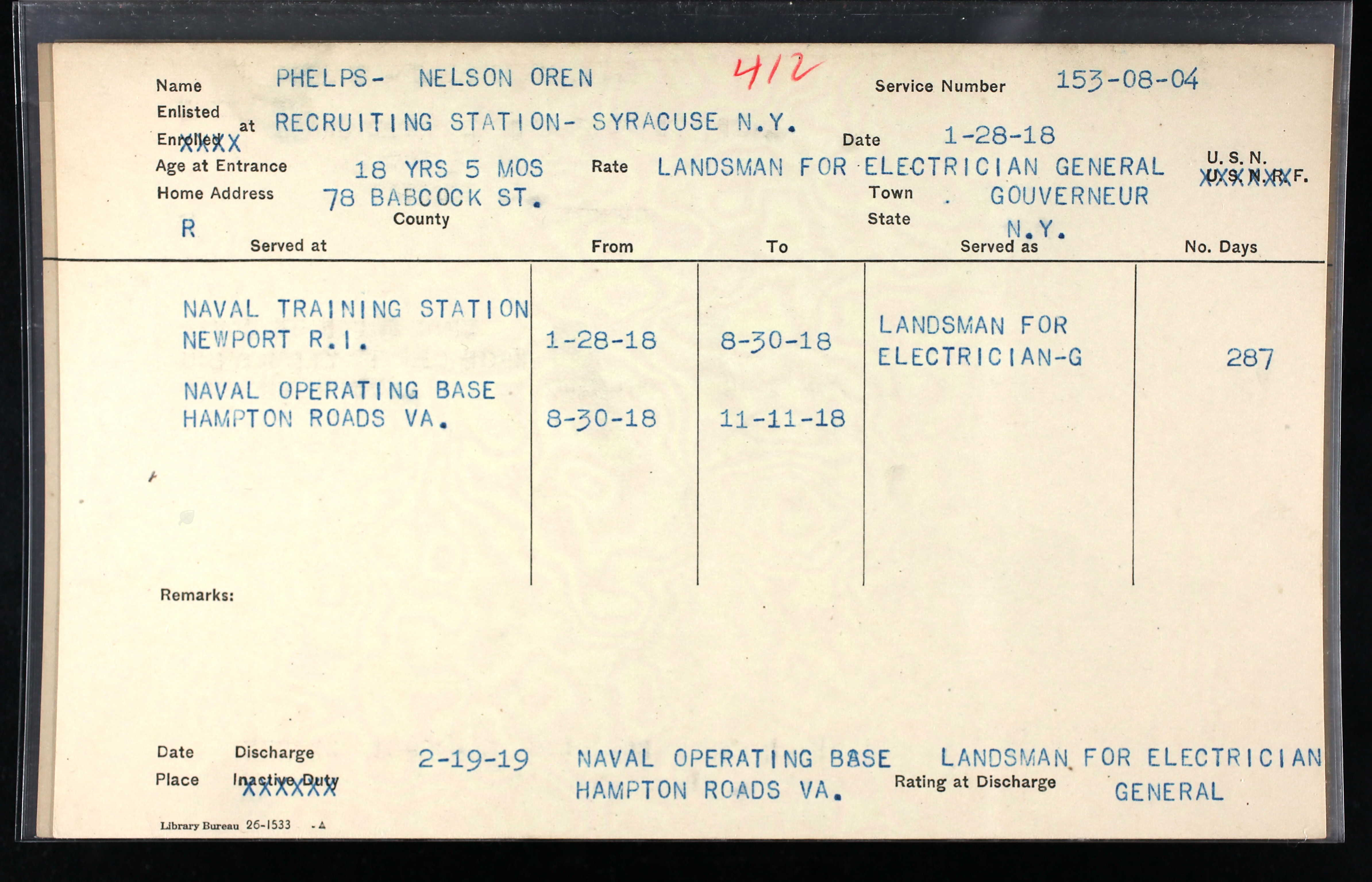 As the United States entered World War I on April 6, 1917, thousands of military age men enlisted in the Armed Forces. On January 28, 1918, at age eighteen, Phelps enlisted in the United States Navy at a recruiting station in Syracuse, New York. For eight months, he served at the Naval Training Station in Newport, Rhode Island as a Landsman for Electrician General (LEG), as seen here.7 The large influx of recruits overwhelmed the facilities at Newport, requiring the station to use tents and tar-papered temporary barracks. Plans to build additional facilities dissolved upon the conclusion of the war. Over 65,000 men received training there before proceeding to other assignments.8 Phelps possessed some form of prior expertise in electricity that allowed the Navy to assign him to this position. A landsman is a person with no experience at sea. They essentially served in caring for the electrical machines and apparatuses.9 The Navy established the rank in 1838 and its disestablishment occurred in 1921.10 After his training ended on August 30, 1918, he moved to the Naval Operating Base in Hampton Roads, Virginia, where he served until the conclusion of the war on after the armistice on November 11, 1918.11 With his training so close to the war’s conclusion, Phelps likely did not serve overseas in any capacity. On February 19, 1919, the Navy honorably discharged Phelps.12

After his discharge, Phelps returned to his hometown of Gouverneur where on November 24, 1919, he married Marguerite Magdaline Burkhard, known commonly as Margaret, also a native of New York.13 The 1920 Census shows the couple living and working in a local hotel owned by Everett Peck and his wife Eva in Gouverneur. Nelson worked as a cook while Margaret worked as a waitress.14 However, by 1925, the family moved to neighboring Lewis County, New York where the 1925 New York Census shows Phelps and his wife settling down in the town of Lowville with their two children, three-year old Margaretta and one-year old Catherine. Phelps worked as a steamfitter at a local factory, a job that saw him involved in pipe and repair work that required great strength and dexterity.15

By 1930, the family moved back to Saint Lawrence County, settling in the city of Hermon where Phelps worked as a superintendent at a local milk plant, perhaps Sheffield Farms.16 The milk marketing industry proved important for the economy of upstate New York, especially Saint Lawrence County, which led the state in manufactured dairy products.17 However, the Depression brought difficult times for the milk industry and Phelps. The decline in prices for milk frustrated dairy farmers who organized the Dairy Farmers Union in 1936. Their strategies involved milk strikes and diverting their milk to put pressure on milk plants. This tactic proved effective in temporarily shutting down some plants. For example, the Sheffield Farms Milk Company closed down its local Canton plant, the largest receiving station in the world, for over one hundred days.18 Certainly as a superintendent and later inspector at the milk plant, this milk recession affected Phelps and his family’s lifestyle. 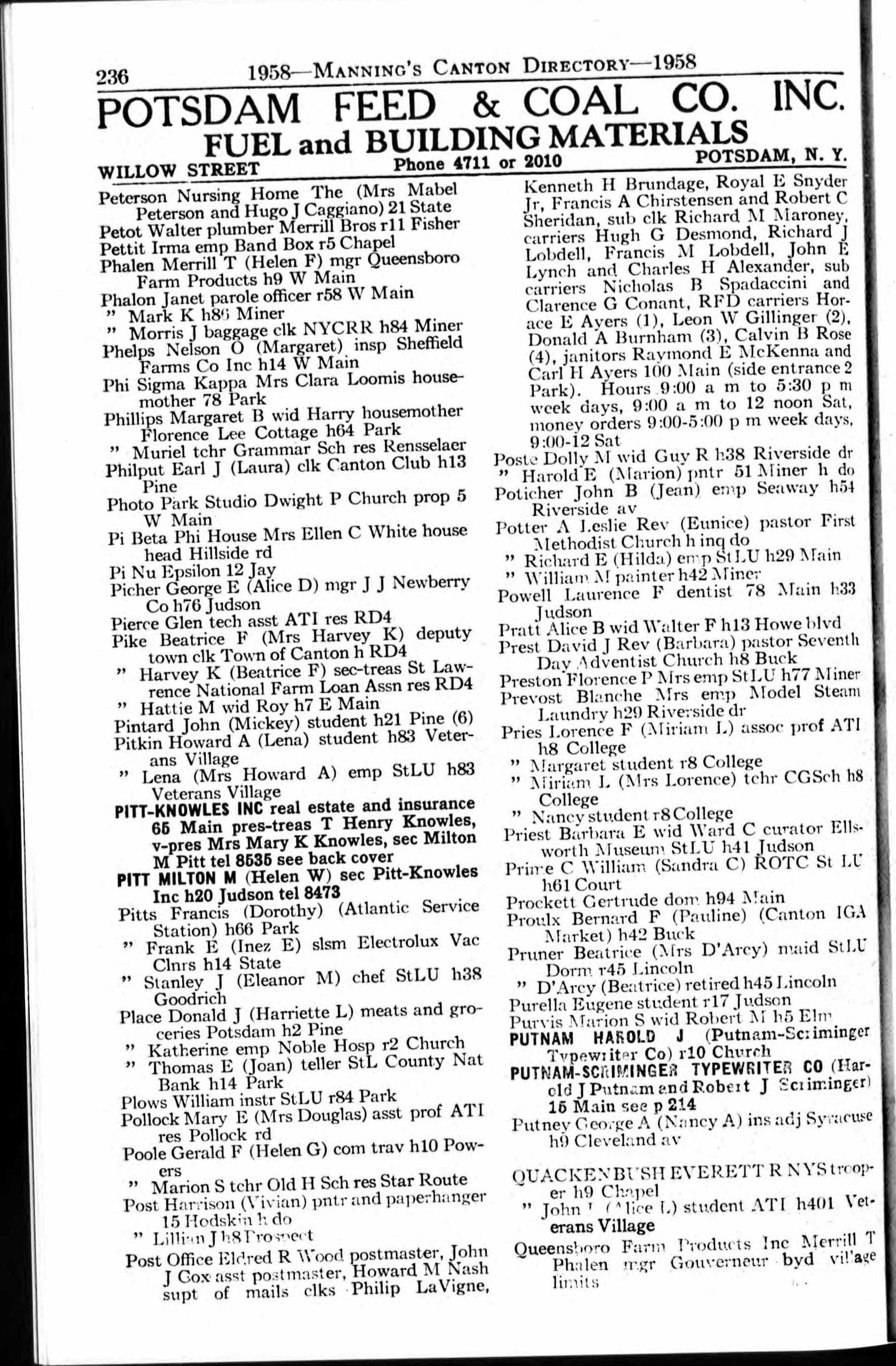 Nevertheless, Phelps continued to maintain employment, transitioning into the 1940s as an inspector at Sheffield Farms in the city of Boonville in Oneida County, New York. The 1940 Census shows Phelps working at the milk farm while his oldest daughter Margaretta, now eighteen, worked as a newspaper correspondent at a local newspaper.19 Phelps continued working for Sheffield Farms into the 1950s, as seen here.20 After years of service for the company, Phelps and his wife moved to Hillsborough County, Florida. On March 22, 1989, Phelps passed away at the age of eighty-nine. He is buried at the Florida National Cemetery in Bushnell, Florida along with his wife Margaret.21 In serving in various occupations throughout his life and in his service in the United States Navy, Phelps demonstrates a life well lived.