By Asanga Wimalasekera and Luke Bohmer

Frank J. Egan was born on December 10, 1898 near Hoboken, New Jersey. More than likely, his family had been some of the nearly four million Irish immigrants who came to the US between 1850 and 1920.1We have little documentation regarding Frank’s childhood or his military service, but the near entirety of his life was bound to his hometown of Hoboken.

Hoboken, colloquially known as the “Mile Square City” for its size, has been an important trading and immigration hub for the majority of its history. Located across the Hudson River from the Port of New York, it provided large-scale shipping facilities for transatlantic trade, and functioned as an extensive railroad hub to the American East Coast. Due to its small size and incredibly specific local job market, the majority of Hoboken’s inhabitants were either dockworkers (longshoremen) or railroad workers. Seen as blue collar work, nineteenth-century emigrants from Eastern Europe and Ireland, and their decedents, filled these jobs for nearly a century.2Frank only received a third-grade education, and spent nearly his entire life working on the Hoboken docks.3

Frank Egan enlisted in the US Army on September 19, 1917, five months after the country’s entry into the First World War.4The beginning of the war drastically affected the transatlantic city of Hoboken. Some of the major piers at the Port of New Jersey belonged to the Hamburg-American Line, a German direct line shipping company in Hoboken since 1847. On April 20, 1917, two weeks after the US entered World War I, the federal government claimed eminent domain of the Line’s property and appropriated its holdings and ships. This followed an outbreak of anti-German sentiment in Hoboken which briefly forced the military to enact martial law.5While we do not know how this unrest affected Frank Egan, but the immediate impact of the war on his hometown and his job may have influenced his decision for enlistment. He enlisted on September 19, 1917 and was discharged April 19, 1918.6 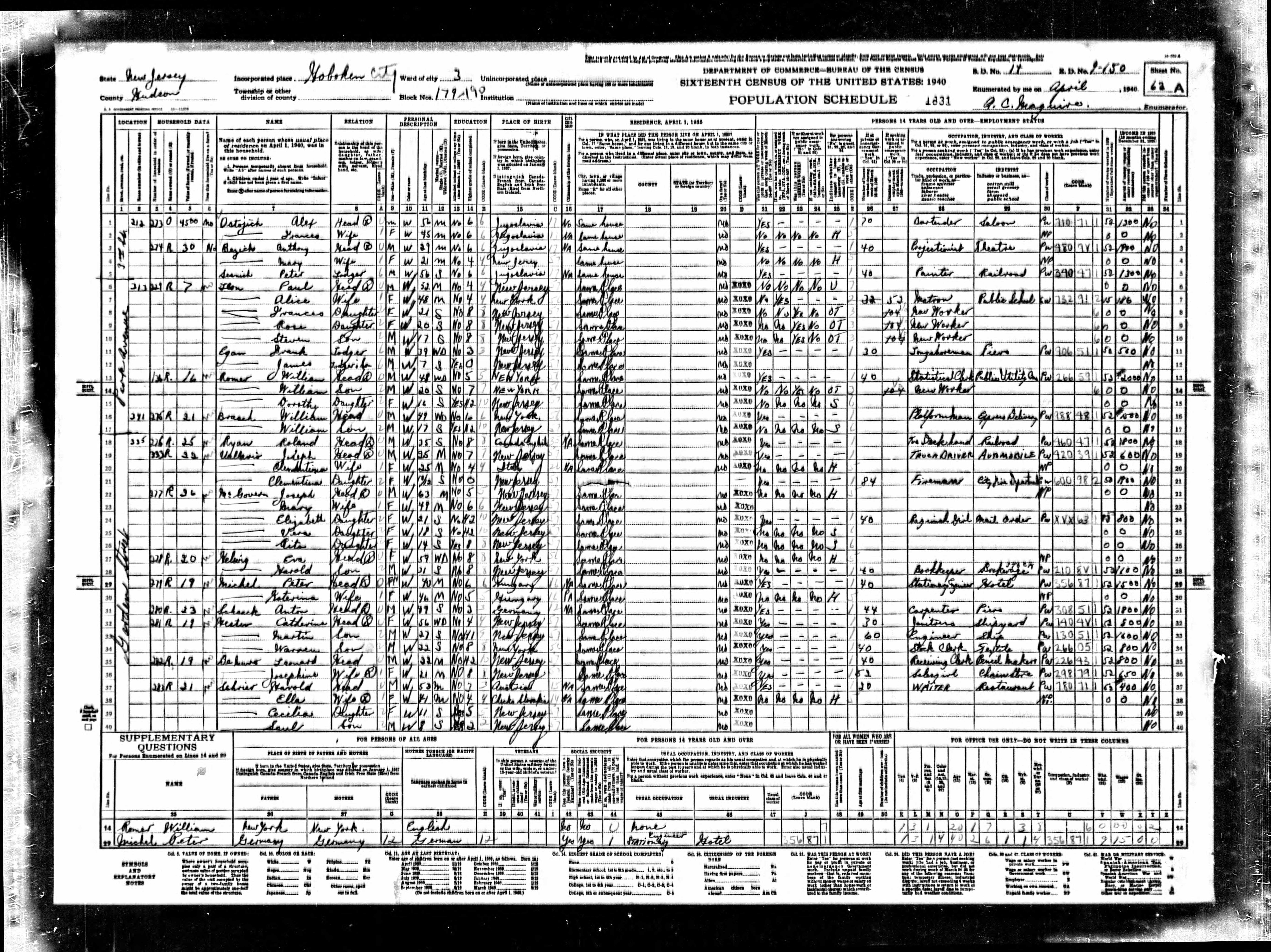 After his discharge from the Army, Egan returned to Hoboken to resume his career as a longshoreman. Around this time, Frank became a member of the International Longshoremen’s Association (ILA), an important union in the US since the 1880s, with a presence in the Hudson area starting in 1910. When the Great Depression struck the country in late 1929, many of those in urban areas flocked to the dockyards in the hopes of finding work on a day to day basis.7Frank’s membership to the union likely gave him greater job security, while many Americans had little choice but to find work as unprotected day laborers at the ports. At some point in the 1930s Egan became a lodger in Paul Toon’s home in Hoboken, as seen here in the 1940 census. More importantly, he had been widowed, and lived with his young son, James (1933).8

Frank continued his work as a longshoreman for the ILA for nearly six decades. During the early 1950s, the ILA faced accusations of corruption and organized crime at the Hudson dockyards. Internal conflicts surrounding these accusations led to strikes and riots in the port. This culminated in a full twenty-five-day work stoppage of all dealings on the Hudson, beginning October 1951, prompting the New York State Industrial Commissioner to appoint a panel to inquiry into the alleged corruption. This inquiry caused a massive shakeup in the ILA, exposing and indicting many high ranking members’ role in corruption and racketeering. In August 1953, the ILA was suspended from the American Federation of Labor until it restructured. This strife within the organization would have been palpable for all of its members, including Frank Egan. Following numerous reforms in the 1960s, the ILA was eventually able to regain its former reputation.9

Frank J. Egan remarried sometime after 1940 to Anne H. Burke, becoming step-father to her daughter Esther. Frank and Anne lived in Hoboken until 1987, when they moved to the Tampa Bay area on the Gulf Coast of Florida to be with Esther.10Egan passed away on February 8, 1988 in Hernando, at the age of eighty-nine. He was buried in the Florida National Cemetery in Bushnell.11Frank’s wife, Anne, lived on for another eight years and passed away on June 25, 1996. She is buried with her husband.12