Felix Prendota was a first-generation American, born to Polish-Austrian immigrants Adam Prendota and Anna Malek. He had three brothers, Stephen, Victor, and Stanley, and a sister, Agnes.1 Prendota’s parents were among the thousands of Polish immigrants who moved to the US between 1880 and 1922. Due to rising land prices and a grain famine in the Polish countryside, many peasant families abandoned their land to seek prosperity in America.2 Chicago, in the middle of an industrial boom, became a major destination for Polish immigrants. Felix’s father, Adam Prendota, worked in either a steel or meat packing factory. Due to the inordinately low wages given for factory labor, nearly the entire Prendota family worked from their small home on the outskirts of Chicago.3 Felix only had a sixth grade education, and likely worked a number of odd jobs.4

Felix enlisted in the US Army on April 30, 1917.5 Assigned to the A Battery of the 12th Field Artillery, he shipped out to Europe on January 11, 1918.6 This division saw action at Aisne, Aisne-Marne, St. Mihiel, Meuse-Argonne, Lorraine and Ile de France.7 The 12th Field Artillery gained a reputation for extreme precision during the Battle of Chateau-Thierry, one of the first American victories of the war. Field artillery played a vital role in the battle, as American forces were able to perfectly synchronize artillery bombardment immediately before infantry charges. Timing was vital for the offensive as ceasing bombardment too early allowed the enemy time to counterattack while maintaining it too long led to egregious amounts of friendly fire.8 Since Felix departed from Brest, France on July 30, 1919,9 it is likely he fought in all of the 12th Field Artillery battles. 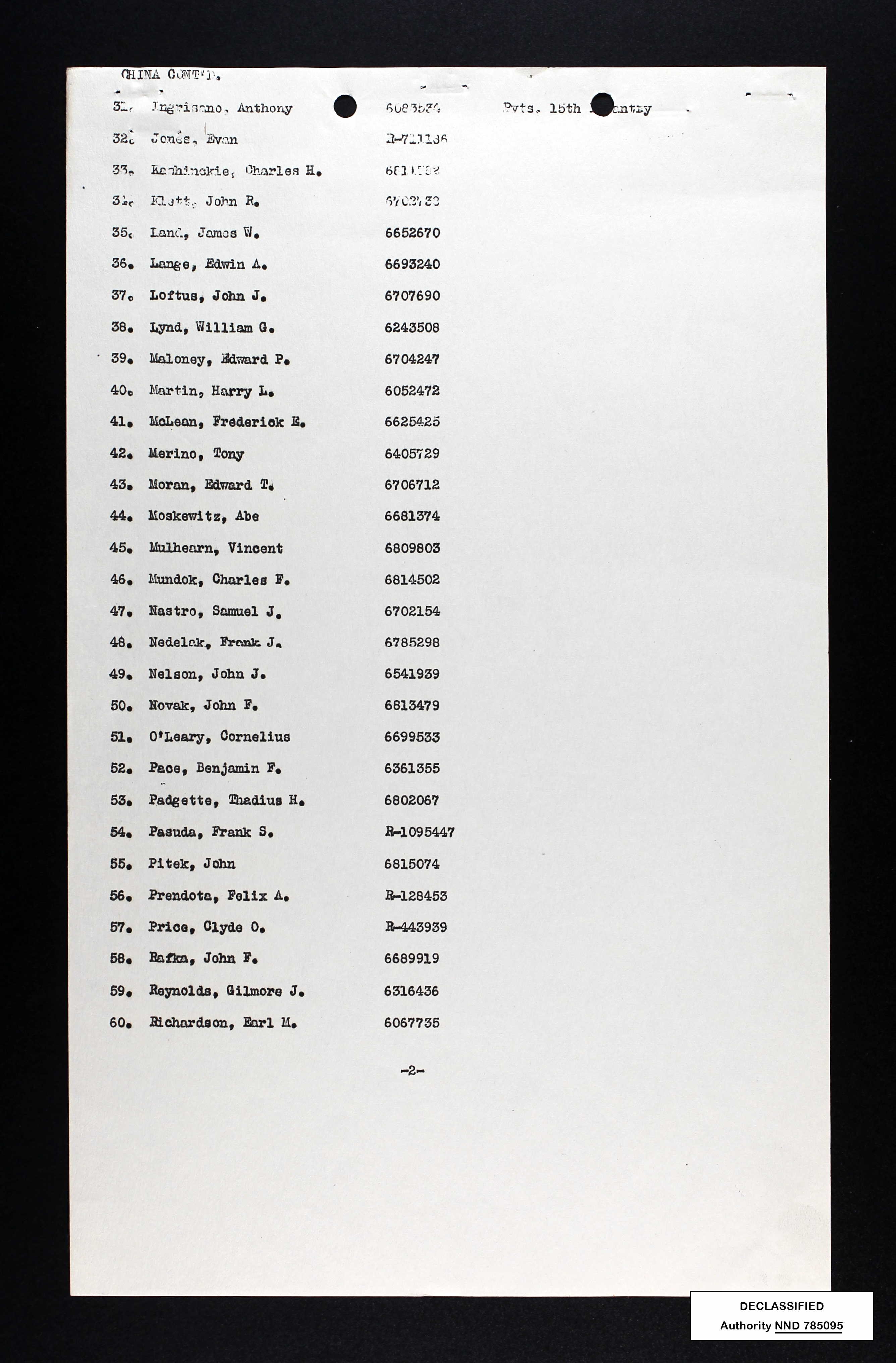 After the war, Prendota remained in the US Army. In all, he served for over fifteen years, and was sent all over the Pacific between 1918 and 1933. In the late 1920s and early 1930s, he served as part of both the 15th and 27th Infantry. Felix Prendota’s appearance in multiple Army transport passenger lists, such as this one, show that he was stationed in multiple countries in the Pacific. Felix was ultimately stationed in Chingwangtao (Qinhuangdao), China with the remainder of the 15th Infantry by November 1932.10 The Army originally sent the 15th Infantry to China to help quell the Boxer Rebellion in 1899, but it remained as a garrison force to defend American interests during a period of escalating violence and instability. The 15th left China in 1938, as the situation deteriorated at the start of the Chinese Revolution.11 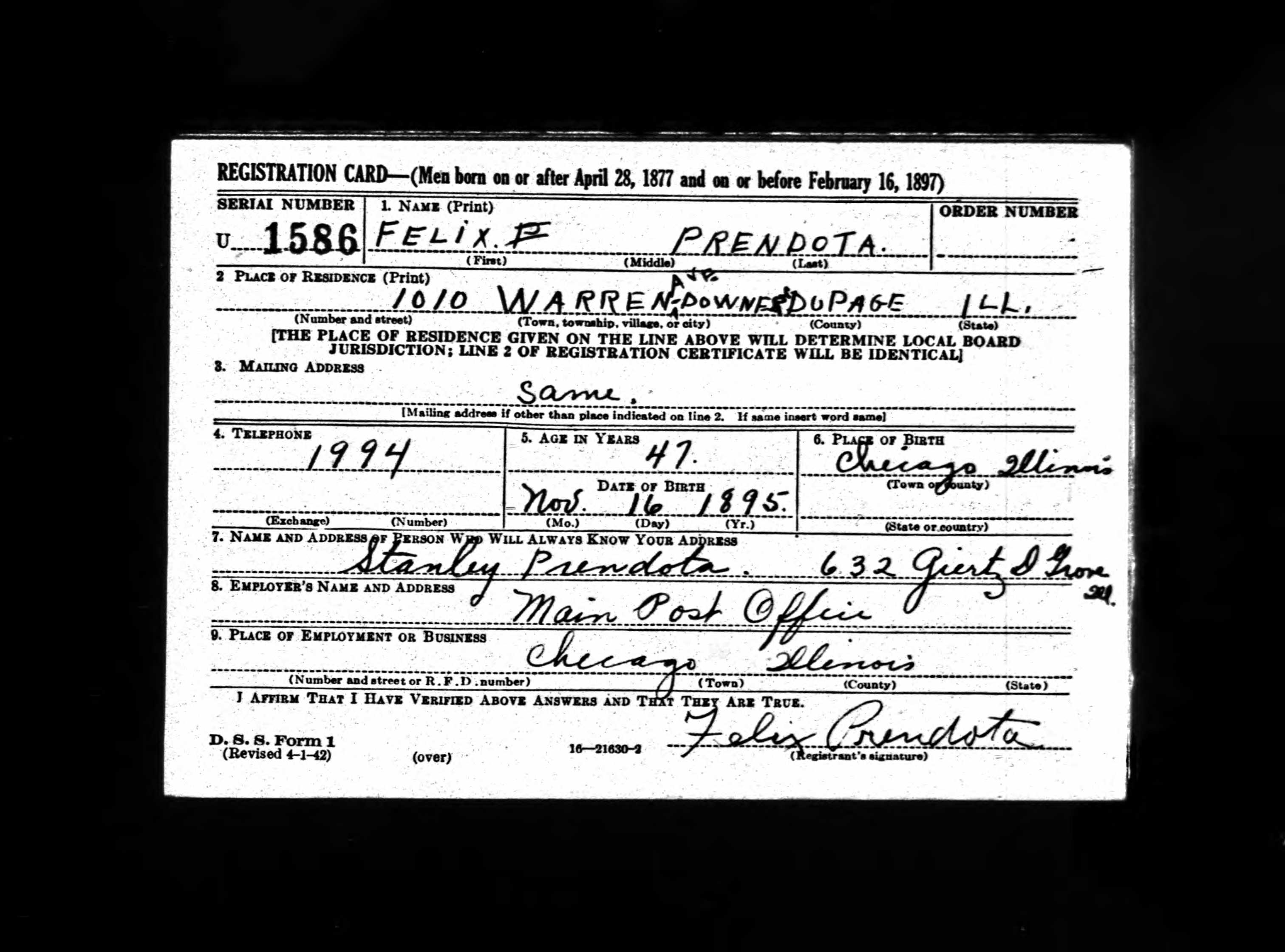 After being stationed in China, Felix returned to Downers Grove, Illinois and continued work as a day laborer. When the United States entered World War II, Felix, at forty-seven, registered for America’s “Old Man’s Draft” in 1942, pictured here. The government required men to the age of sixty four to registration in order to collect information and “determine if their labor skills could be used in the war effort.”12

After World War II, we have few sources regarding Felix Prendota’s life. According to her obituary in the Orlando Sentinel, he lived in Florida with his wife Ruby Irene Prendota, who died on September 2, 1979. At the time of Ruby’s death, she and Felix had two daughters, three grandchildren, and two great-grandchildren.13 Felix Prendota passed away in Winter Park at the age of ninety-two and is buried in Florida National Cemetery in Bushnell.14