Francis Clayton Gerould was born on January 19, 1900 to Truman Wood (T. W.) and Bessie Gerould in the small town of Athens, Pennsylvania. Athens, located on the border with central New York state, had a population of roughly 3,700 in 1900.1 Francis Gerould was the third child of eight, with one older brother (Robert, 1893), two older sisters (Lilian B, 1897 and Mildred, 1898), a younger sister (Helen, 1902), and three younger brothers (William W, 1901, Wesley L, 1903, and Owen, 1909). His father worked as a mail carrier and was an active member in the town’s religious community, holding office at their local church.2 The Gerould family played an active role in their community, often announcing family gatherings and community announcements in their local paper, The Evening Times.3

Francis Gerould lived a quiet life in his small hometown, but at the age of sixteen (five years younger than the required twenty-one years for military service), he made a decision that shaped the next forty years of his life. On July 8, 1916, Gerould enlisted in the US military at Fort Slocum, New York and was placed in the 5th Cavalry Division.4 In that same year, Mexican revolutionary Pancho Villa, a former US ally, attacked Columbus, New Mexico, killing eighteen.5 Conflicts along the US-Mexico border began in 1910 when Mexican revolutionaries rose up against President Porfirio Diaz. By 1916, the conflict became a civil war.6 Villa’s entry into the US, while not the first that occurred along to border, led President Wilson to respond by sending General John J. Pershing across the border with over ten thousand American troops. While not part of the initial incursion, Gerould and the 5th Cavalry patrolled in the municipality of Satevó, about three hundred miles south of El Paso, Texas, during the expedition. The US military action in Mexico ended in February 1917.7 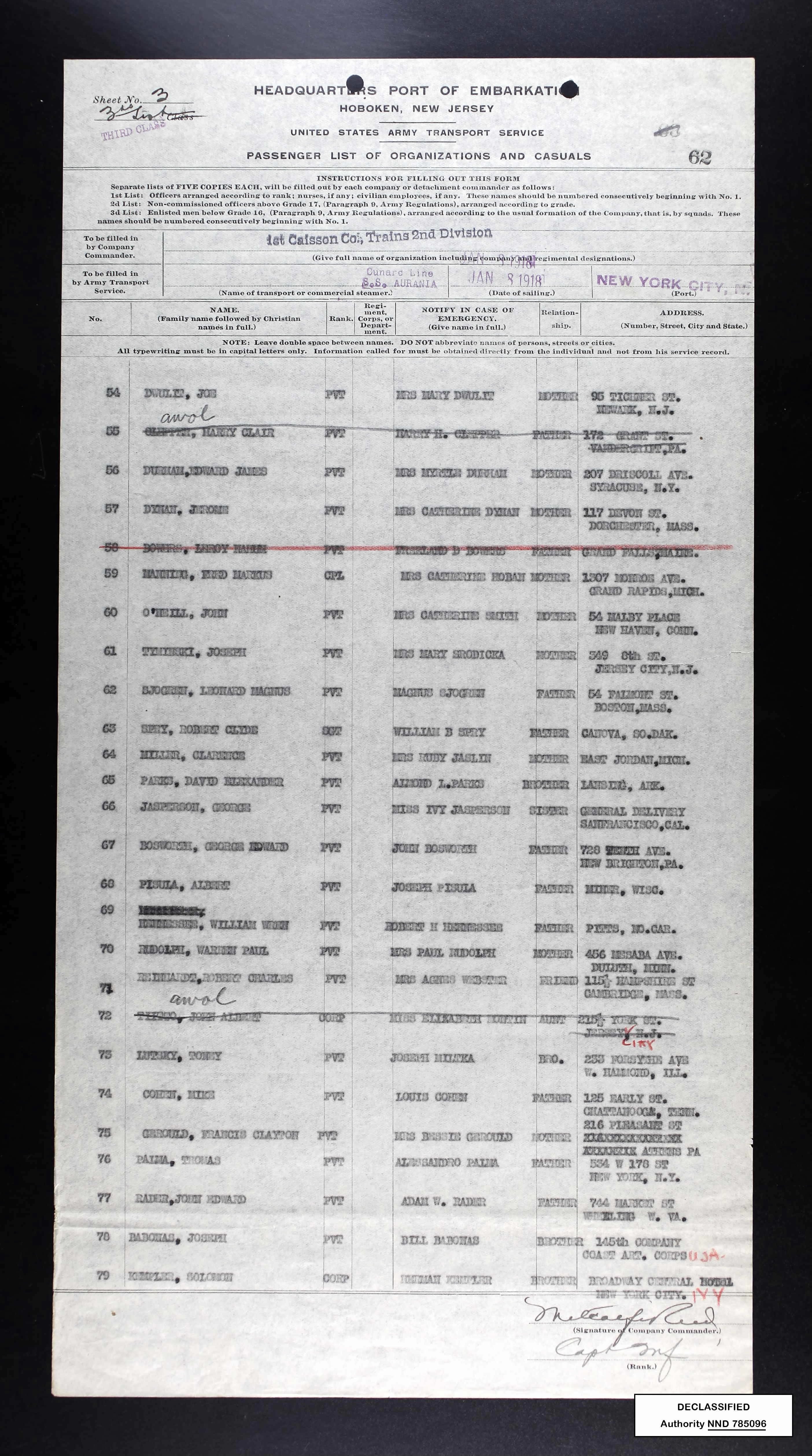 A mere two months after the official withdrawal of American troops from Mexico, the US entered the First World War, and the Army transferred many troops with war experience to the American Expeditionary Forces (AEF) going to France. In October 1917, Francis Gerould transferred out of the 5th Cavalry and joined the 1st Caisson Company of the Trains 2nd Division. The 1st Caisson Company, later reorganized as the 2nd Ammunition Train, supplied the front lines with rounds and artillery shells.8 Although not stationed on the front lines, ammunition trains faced artillery bombardment and strafes from early aircraft. The 2nd Ammunition Train transported ammunition from Paris to the front lines via railways and country roads.9 It is likely that Gerould was given this assignment due to his familiarity with horses, which were still the primary mode of transportation during the First World War. Gerould arrived in France in January 1918 via the repurposed cruise liner, the SS Aurania, evidenced by this army transport list.10 Incidentally, this may have been the final transatlantic voyage for the Aurania, as it was torpedoed and sunk off the coast of Scotland on February 3, 1918.11 Gerould stayed in Europe for seventeen months, providing vital supplies to the front line from central France for the last year of the war. His unit supplied the AEF in key operations during the conflict, including St. Mihiel, Aisne-Marne, and Meuse-Argonne, seen here on his application for the World War I Victory Medal.12 He left Brest, France on board the USS Finland on July 25, 1919 bound for New York and was honorably discharged on October 22 in Camp Travis, Texas.13 His military service did not end with the war, seeing as he reenlisted in 1920 and was stationed at Fort Oglethorpe in Georgia.14 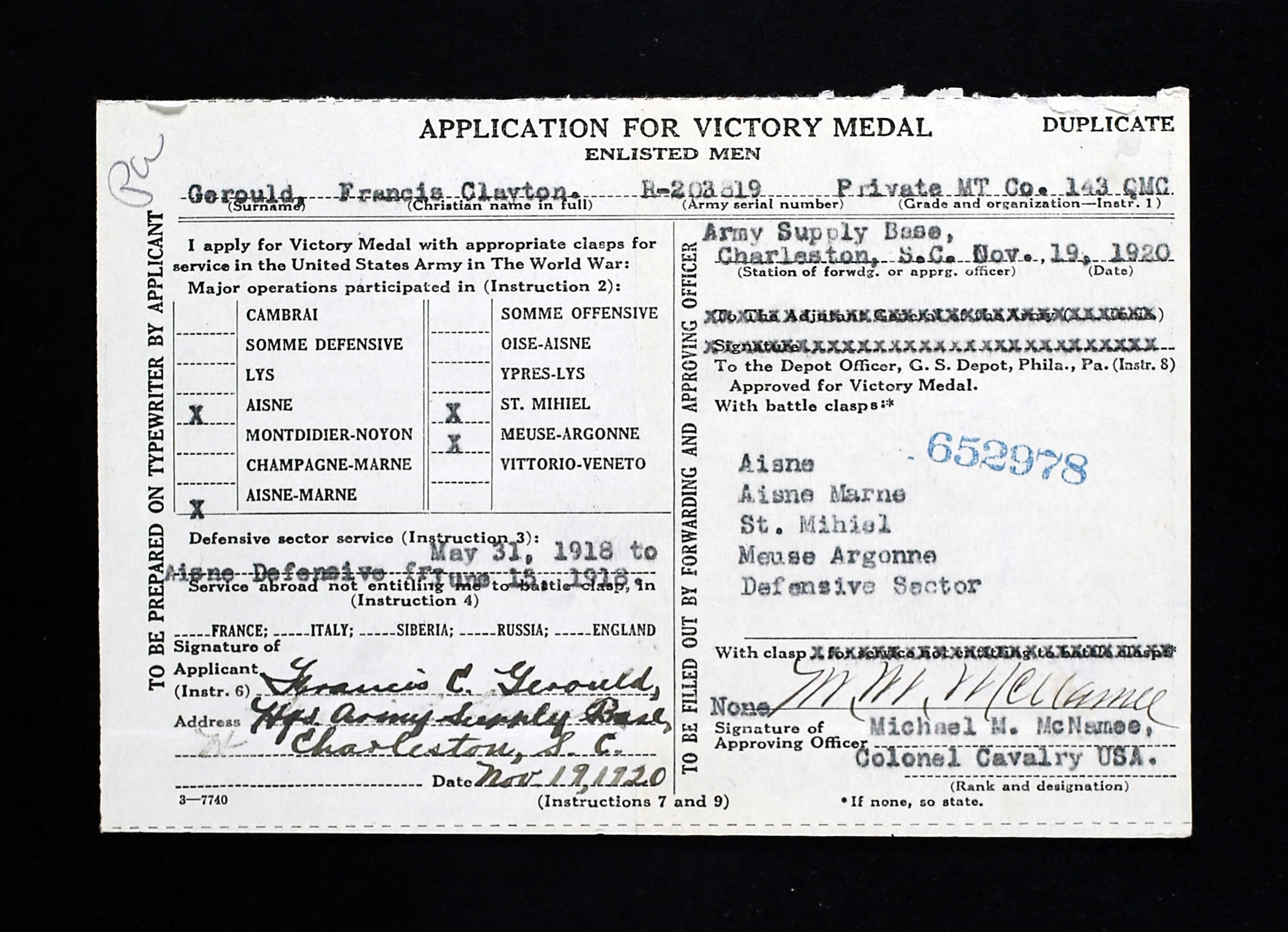 Between 1920 and 1938, Francis Gerould had moved to Philadelphia. There, he met and married Gertrude Browne.15 By 1940, Gerould had moved in with his in-laws in Philadelphia and was employed by the federal government for a project with the Works Progress Administration (WPA).16 Founded under the Roosevelt administration to combat the unemployment of the Great Depression, the WPA provided more than eight million jobs from 1935 to 1943. WPA wages varied greatly across the nation, with Pennsylvania’s being comparatively high.17 Gerould reenlisted in the army in November 1942, and was transferred to Camp Shelby, Mississippi. By this time, he had achieved the rank of master sergeant, meaning that he likely worked in the base as an instructor or administrator. He was discharged shortly thereafter, on February 22, 1943.18 Gerould served in the Army Reserves throughout the 1940s and 1950s.19

Like many other Americans, Francis and Gertrude likely retired to Florida, moving to Hillsborough County.20 Francis Gerould died on January 7, 1989, twelve days before his eighty-ninth birthday, and is buried at the Florida National Cemetery in Bushnell. Gertrude spent her remaining years in their Hillsborough community where she died on February 8, 2000. She was laid to rest alongside her husband.21

5 Charles H Harris and Louis R. Sadler, The Great Call-Up: The Guard, the Border, and the Mexican Revolution (Norman: University of Oklahoma Press, 2015),5.