Early Life: Working for the Railroad

Born on May 17, 1891 in Seattle, Washington, Charles (Carl) James McLaren grew up in Minnesota, the son of a Canadian-born father and Lena McLaren from Illinois. The family included his older siblings Katherine (Kittie), Robert, and Laura McLaren, all born in Minnesota. By 1900, McLaren’s father passed away, leaving Lena, who worked as a cook, a widow and McLaren and his siblings fatherless. By this point, the family resided again in Minnesota, settling in Cass County. 1 Five years later, the 1905 Minnesota State Census shows the family living in Brainerd in neighboring Crow Wing County where McLaren’s mother supported the family by keeping boarders. McLaren, now fourteen, studied at school while his older brother Robert worked as a watchman to help support the family.2 William McCarthy, a boarder who worked as a machinist, eventually married McLaren’s older sister Katherine. Perhaps through McCarthy, McLaren soon began his career in the railroad industry.

In 1907, McLaren began a machine apprenticeship with the Northern Pacific Railway Company in Spokane, Washington. Due to his youth, McLaren added two years to his age, stating his birth year as 1889, thus making him eighteen and old enough to qualify for the apprenticeship. 3 The Northern Pacific Railroad’s completion in 1883 helped open the Pacific Northwest with the railroad stretching from Tacoma, Washington to Saint Paul, Minnesota. The railroad encouraged migrations to the western states of Idaho, Oregon, and Washington where the combined population grew from 283,000 in the 1880s to over two million by 1910. 4 By the 1910 Census, McLaren and his sister Laura lived with Katherine and her husband William in Spokane. 5 The railroad industry saw McLaren working in various places in Washington, Idaho, Montana, North Dakota, and Minnesota. By 1916, McLaren married a woman named Iris while working for the company in Minnesota. 6 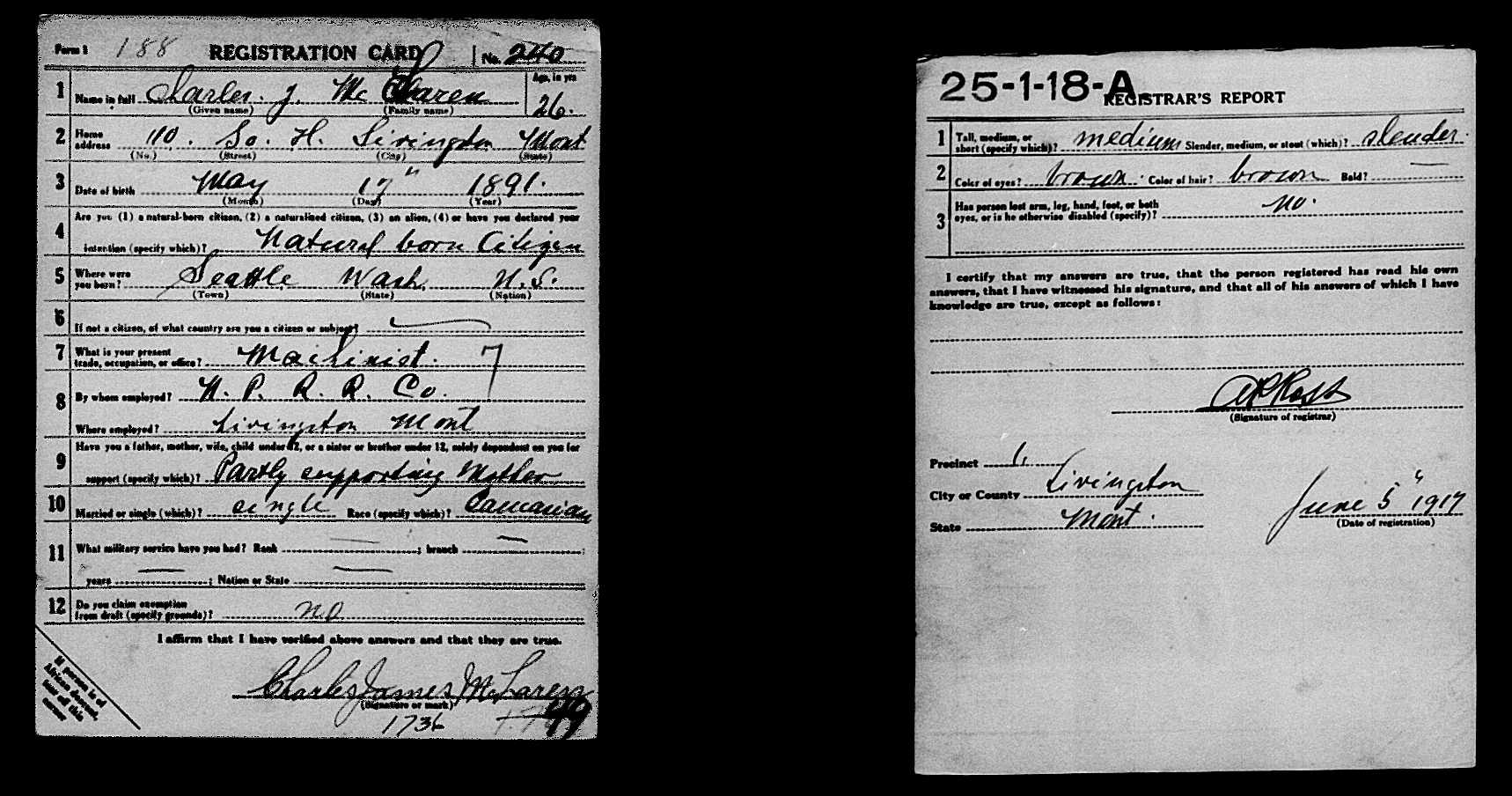 On June 5, 1917, while living in Montana, McLaren registered for the draft (as seen here). At the time, McLaren partly supported his mother working for the railroad. 7 On May 27, 1918, he enlisted in the United States Navy. 8 When the US entered the war in 1917, the Navy was vastly underprepared with less than two hundred ships and only a third of these ships operational for service. Thus, the US underwent a massive shipbuilding program. 9 Centers like the Naval Station Great Lakes near Chicago prepared sailors to perform a variety of duties on board naval vessels. It is likely that McLaren trained at the Naval Station Great Lakes where over 125,000 sailors—including machinists—received training over the course of the war. 10 Upon completion, recruits then received their assignments. During his time in the Navy, McLaren held the rank of Machinist’s Mate, First Class (MM1). Up until 1920, his rank paid him $60.50 yearly due to the Act of May 13, 1908 but the Act of May 18, 1920 increased his pay to $84.00 yearly. 11 The basic responsibilities of a machinist’s mate involved operating, maintaining, and repairing the ship’s propulsion machinery, auxiliary equipment, and outside machinery. They also had to maintain records and reports. 12 Perhaps McLaren’s experience serving as a machinist for the Northern Pacific Railway Company translated into his service in the Navy which he continued after the war ended with the armistice on November 11, 1918. McLaren remained in the Navy until September 30, 1921 when the Navy honorably discharged him. 13

Postwar: Back to the Railroad/Family Life

After the war, McLaren continued to work for the Northern Pacific Railway Company during the 1920s and 1930s. By 1923, his marriage to Iris had apparently ended as he omitted any mention of a spouse on his application for a machinist job. 14 During the mid-1930s, an interesting predicament occurred for McLaren when he sought to correct his true birth date to gain extra employment. He wrote a letter (as seen here) to the headquarters of the Northern Pacific Railway Company in Saint Paul, Minnesota, to set the record straight concerning his birth date. His mother Lena went before the Notary Public on February 25, 1936 confirming his birth date on May 17, 1891 rather than 1889. 15 During the Great Depression, employers often set age limits for workers, so McLaren had a greater chance of gaining a job being 34 rather than 36. McLaren eventually became a master mechanic at a machine shop. By 1940, McLaren settled down, marrying the former Anne E. Thoma. The couple, their one-year old daughter Carol born in Washington, and Anne’s brother John Thoma all lived in Lewis County, Idaho where McLaren’s job earned him a yearly salary of $2,300. 16 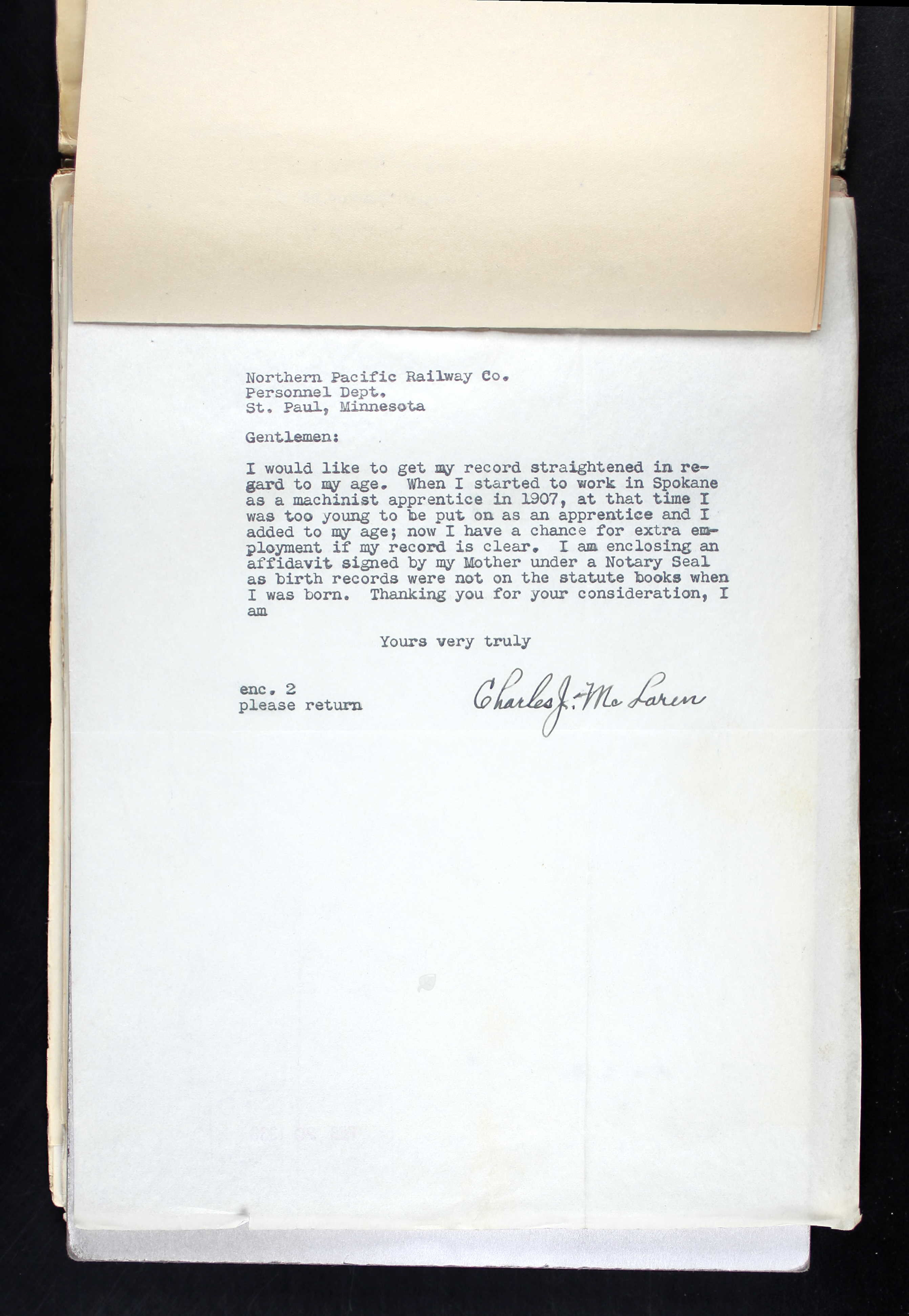 When the US entered World War II, McLaren, at age fifty-one, participated in what is commonly referred to as the “Old Man’s Registration,” which the government used to measure the industrial capacities and skills of men between the ages of forty-five and sixty-four for national service at home. During this time, the family returned to Seattle where he worked at the Associated Shipyard on Harbor Island. 17 After the war, McLaren and his family moved to Spokane. 18 Eventually, McLaren and his wife moved to Florida where he spent the remaining years of his life. On September 20, 1988, McLaren passed away in Brevard County, Florida, at the age of ninety-seven. 19 He is buried at the Florida National Cemetery in Bushnell, Florida along with his wife Anne. 20 From working with machinery both as a sailor and civilian, McLaren’s journey took him to various places in the United States in service to his country and his family.

4 “Lesson Fourteen: Industrialization, Technology, and Environment in Washington,” Center for the Study of the Pacific Northwest, accessed July 11, 2017, http://www.washington.edu/uwired/outreach/cspn/Website/Classroom%20Materials/Pacific%20Northwest%20History/Lessons/Lesson%2014/14.html.