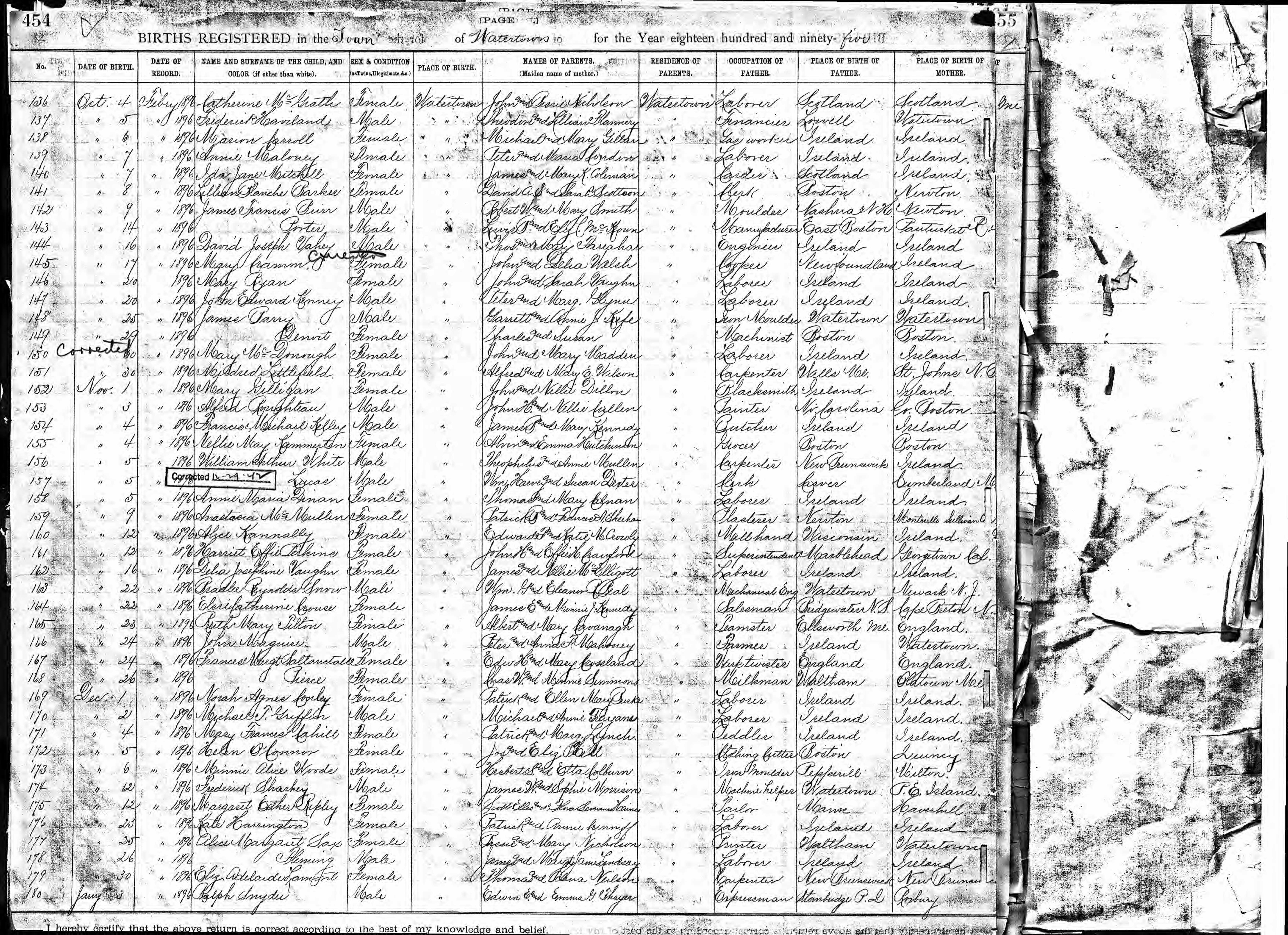 Mary Gilligan Sutherland served in the US Navy and achieved the rank of Yeoman F 1st Class at a time when few women served in the military. The F stood for female. She was the daughter of Irish American immigrants, seen in the Massachusetts Birth Records, as John Gilligan and Nellie (Ellen) Dillon.1 Born on November 1, 1895 in Watertown, Massachusetts, Sutherland later moved to Palm Bay, Brevard County, Florida.2 According to the 1900 US Census, her father was a blacksmith, and she had six siblings: Margaret, Edmund, Cecelia, Francis, Thomas, and Joseph.3 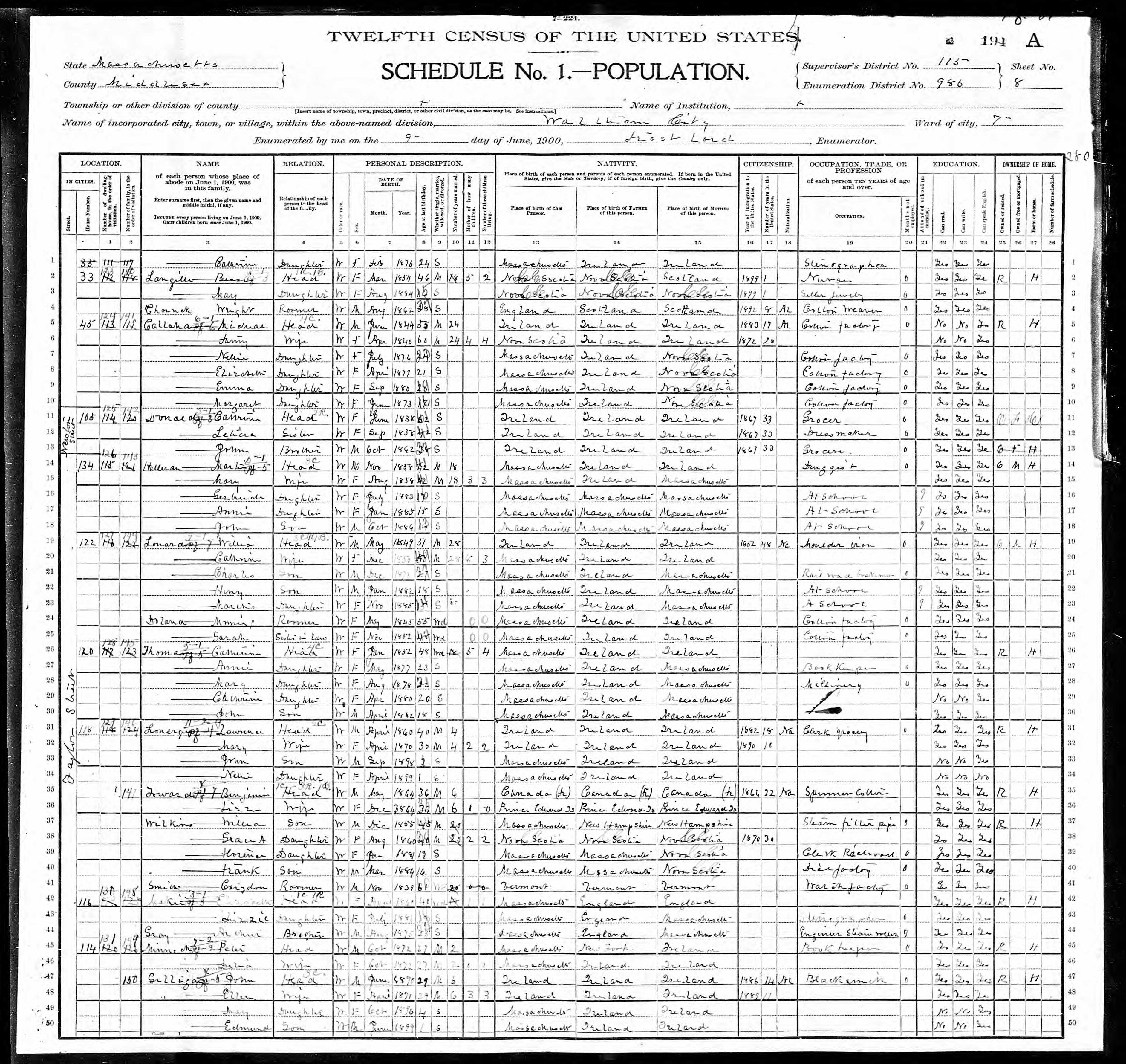 We have little information regarding Sutherland’s early life and childhood apart from her living with her parents in Watertown, Massachusetts. Sutherland most likely worked in a factory in her early adult life given Massachusetts’ strong industrial economy in the early twentieth century, as well as how common it was at the time for women to work in textile factories. This could explain why she chose to join the Navy—for better wages than in a factory or for more freedom and adventure. World War I was also a time of change, and it is possible that the women’s suffrage movement helped give Sutherland the confidence to join the Navy.

Sutherland joined the US Navy on September 3, 1918, just before her twenty-third birthday as a Yeoman F 1st Class.4 Sutherland, like other women who joined the military, likely saw an opportunity to show she could serve her country as well as a man. The US Navy was largely unprepared for the war’s demands. The US Navy quickly realized it needed to increase recruitment. According to Nathaniel Patch, the “unassuming language of the Naval Act of 1916… unintentionally opened the door to women volunteering in the U.S. Navy.”5 Vaguely worded, it did not prohibit women from joining. Moreover, once the US entered the War, the Navy’s Bureau of Navigation made clear the Navy would start recruiting women—the only branch of the US military to do so. The Navy released a memo to commanders opening a number of non-combatant roles to women. Women not only worked as secretaries, but also “as mechanics, truck drivers, cryptographers, telephone operators, and munitions makers.”6 It is likely Sutherland worked in one of these roles, making a vital contribution to the war. The Navy was largely unprepared for the enlistment of women. It had no one to perform the required medical exams of female recruits, so recruitment offices often brought in nurses from naval hospitals. It also had to solve problems with providing uniforms and finding living arrangements for female recruits.7

The Navy discharged most female Yeomen in 1920 and paid for them to return home.8 That same year, the Nineteenth Amendment passed after a decades-long fight for women’s suffrage. Sutherland returned from serving in the Navy just in time to be able to vote. At some point after the war, she moved to Seattle, Washington, and then from Seattle to Palm Bay, Florida, in 1978. She had three children, John, Richard, and Marilyn, as well as thirteen grandchildren and six great-grandchildren.9

Sutherland lived ninety-two years as part of a trailblazing generation of women. Through her service, Sutherland furthered the women’s rights movement and became a role model for women that followed. A member of both the Disabled American Veterans and the American Legion, she must have been quite proud of her military service.10

Sutherland died September 28, 1988, and was laid to rest in Florida National Cemetery.11 In this respect, Mary Sutherland is exceptional. Women who served in the auxiliary branches of the armed services had to fight to earn veteran status. Women Airforce Service Pilots or WASPs, for example, who flew during World War II, only earned veteran status after Congress passed legislation in 1977.12 Women like Sutherland proved to the military that women were important to the nation; they help us to remember that women can do anything.

12For more on WASPs see: Wings Across America, “WASPs on the Web,” accessed July 23, 2017, http://www.wingsacrossamerica.us/wasp/index.htm.