Henry F. Cavicchi was born on September 4, 1896 in Plattsburgh, New York.1 His mother, Elmina, came from Quebec, Canada, while his father, Ercole Cavicchi, was born in Bologna, Italy, and immigrated to the United States in the 1880s.2 Italian immigration to the United States increased dramatically through the late nineteenth and early twentieth centuries, with most new arrivals entering through Ellis Island. The decade Henry Cavicchi’s father arrived in America, another 300,000 people entered the country from Italy. Given the family’s temporary residence in New York, it is possible that Cavicchi’s father came in through Ellis island, one of the 300,000 in the 1880s. By the 1890s, this number doubled.3 This new surge in Italian immigration around the turn of the century is often attributed to the shortage of jobs in Europe. Because of this, many of the immigrants from Italy were poor farmers or laborers, and a significant number of them, like Henry Cavicchi’s father, were single men looking for work and a better quality of life. The boom in Italian rural immigration persisted until the Immigration Act of 1924 (National Origins Quota Act of 1924), when the US government mandated immigration quotas on basis of race and country of origin. These quotas limited immigration to two percent of each nation’s representation in the United States population. In 1929, the federal government made these quotas permanent in an attempt to ensure immigrants came primarily from northern and western Europe..4

During the first decade of the twentieth century—which coincided with the first full decade of Henry’s life—Ercole Cavicchi moved his family to Massachusetts, where he started his own business, and obtained what can only be considered the American Dream. He ultimately proved a gifted inventor and entrepreneur. Most of his inventions pertained to the polishing of stone floors.5 However, likely inspired by German submarine attacks on American trade vessels during the First World War, Ercole also filed a patent in 1917 on a design for ship’s armor to protect civilian ships from torpedo attacks. As a band of hard metal fins attached to the sides of a ship’s hull, the design either caught the torpedo before it hit the hull of the ship, or deflected the torpedo away.6

Henry Cavicchi’s young life no doubt centered around his father’s store, where he worked at as a young man. As seen here, Cavicchi registered for the draft on June 5, 1918 in Everett, Massachusetts.7 It is unlikely that Cavicchi ever traveled overseas to fight in the war, as fighting ended two months after his enlistment. He was released from the Navy in January 1919. Nevertheless, Cavicchi’s service should not be considered any less important than other veterans. He enlisted as an Air Service Aircraft Rigger (ASAR).8 Essentially, his job was to rig the cables around military planes before they went into action. This says a great deal about the changing nature of war by the end of 1918, and the burgeoning interest in aerial warfare across the globe. Although many considered the airplane to have limited military potential during the first years of its introduction, aircraft became far more complex, with specialized types performing specific duties in combat, by the time World War I ended. The primary aim of naval air power during the First World War was mainly to counter German submarines.9 Even though the airplane was just over a decade old, it was already a versatile military weapon that proved vital to modern warfare by the time Cavicchi joined the navy. His job as an aircraft rigger during the last months of World War I shows how important planes were to the US military, foreshadowing their continued development and widespread use in the Second World War. 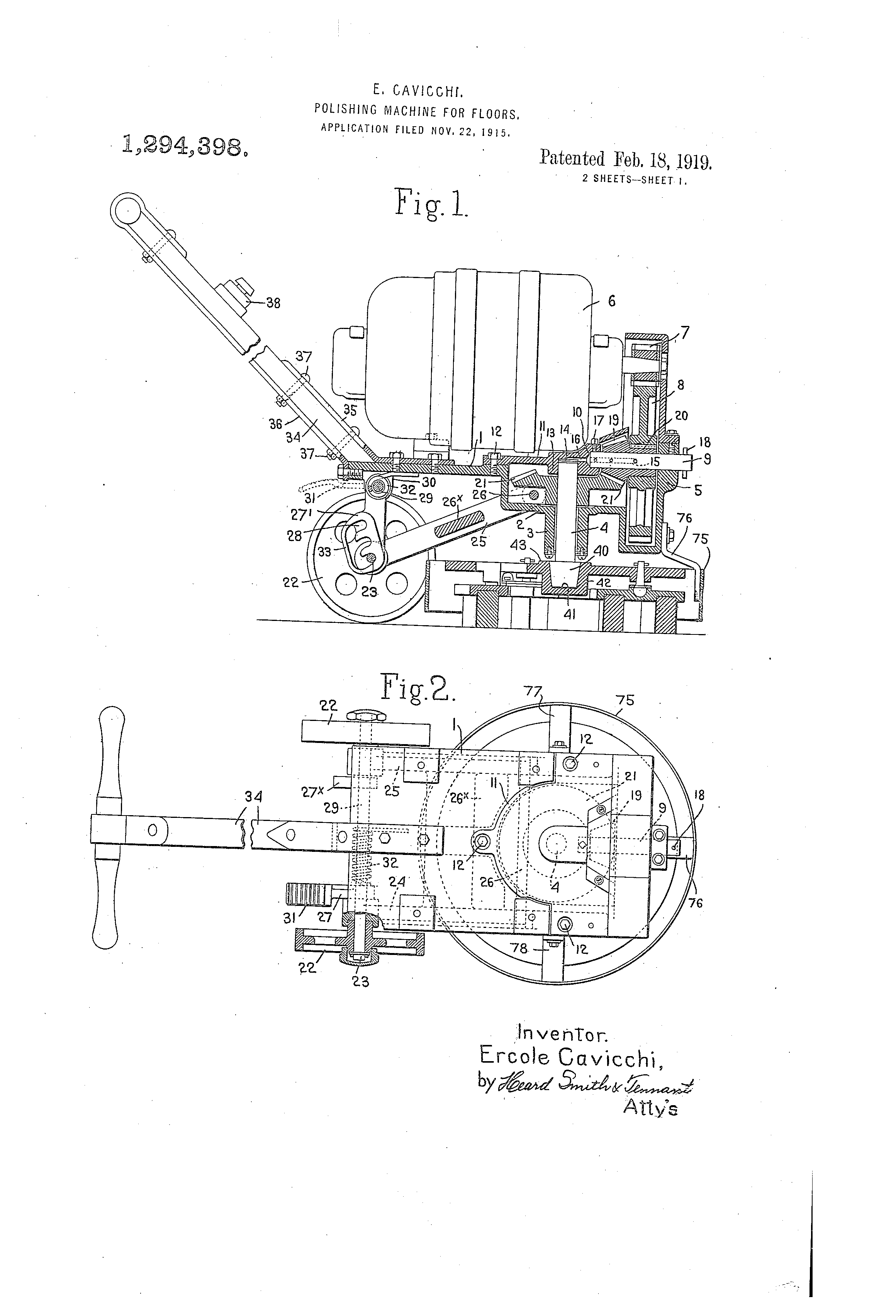 Henry returned to Massachusetts after the war and married Emily A. Essex in 1922. Together they had four daughters and one son. Upon his return home, Henry continued work at his father’s business, Cavicchi Polishing Machine Co. The company, based in Dorchester Massachusetts, “specialized in manufacturing machines for the surfacing and polishing of terrazzo, granite, marble, and other stone.”10 Between 1915 and 1932, Ercole Cavicchi patented at least three inventions related to his polishing machine business, the most recognizable being a mower-like machine designed to polish floors, pictured here. These inventions helped Cavicchi make a name for himself and his family in their community.11 Cavicchi's father retired sometime in the late 1930s, and lived his remaining few years in St. Petersburg, Florida where he died on January 29, 1946.

Henry Cavicchi worked alongside his four brothers Roy, Roland, Charles, and Joseph at Cavicchi Polishing Machine Co. In 1942, Henry registered for the Old Man’s Draft, which allowed the conscription of those between the ages of forty-five and sixty-four.12 Although these men were not expected to see combat, the information gathered for the draft provided data about the industrial capacity of the US, largely to determine how domestic production might help the war effort. 13

Henry Cavicchi and his family lived a middle class life, with the 1940 census listing a live-in maid.14 Eventually Henry retired from the family business and moved to Florida with his wife Emily until he passed away in Manatee, Florida, on July 30, 1991, at the age of ninety-four. Emily passed away two years later at the age of ninety-one.15 Ultimately, the Cavicchis achieved the American Dream, riding a remarkable arch of progress as one of America’s many immigrant families in the twentieth century.