George Philip McCann was born to Charles and Annie McCann on September 12, 1899, in New York, New York. His father was the child of Irish immigrants, and his mother was the child of German immigrants, both born in New York.1 The family, including his older brother Charles Jr. (1892), lived in the twelfth ward of Manhattan until George’s late twenties. Charles Sr., a butcher, owned his own shop where both boys grew up working and learning the trade. George went to school until the seventh grade while working as an “errand boy” for his father, likely running packages to customers. After that, he probably worked full time at his father’s shop.2 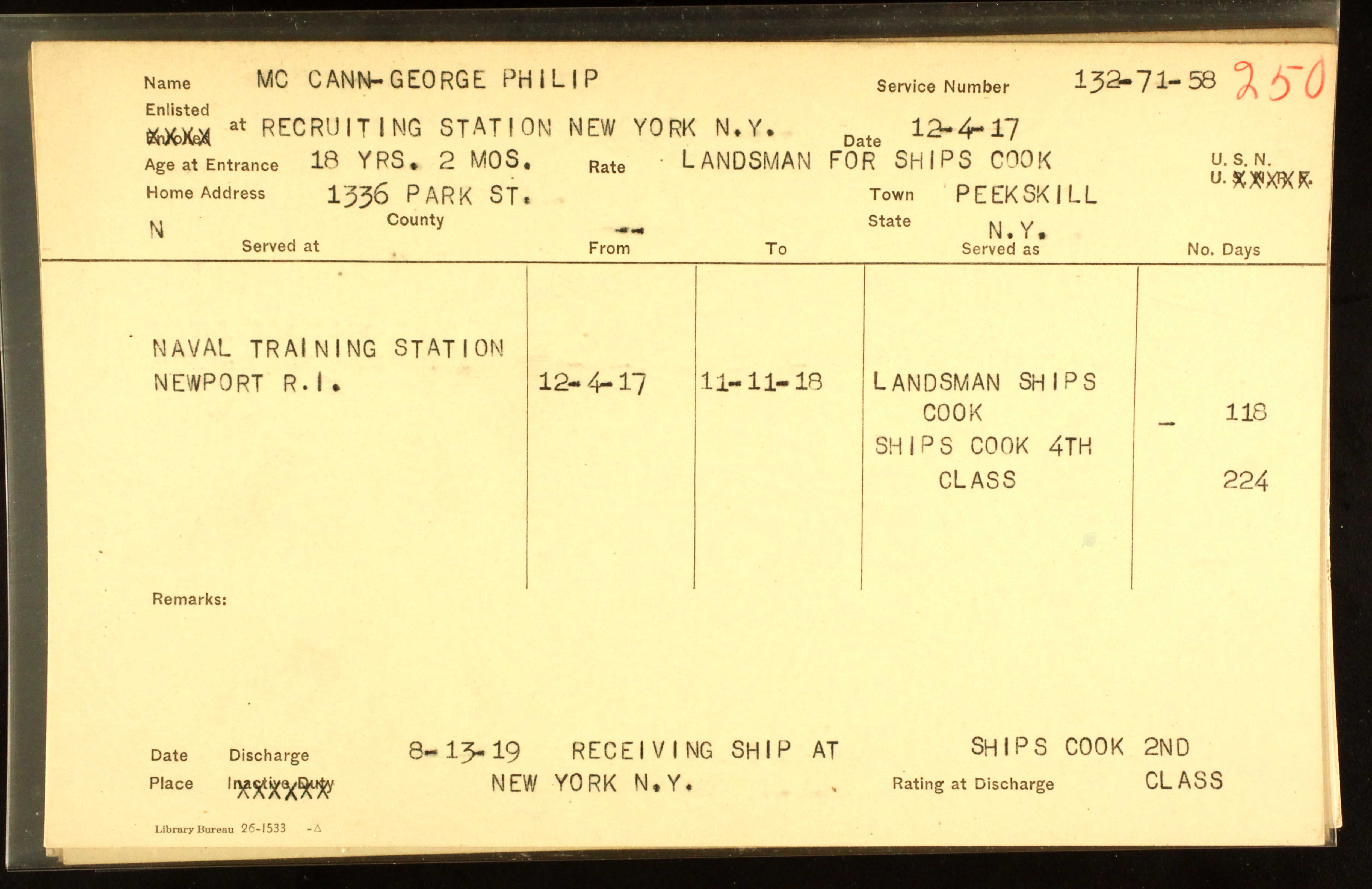 On December 14, 1917, George went to a recruiting station in New York City and enlisted in the United States Navy. As his service card shows, he spent his military career at the Naval Training Station in Newport, Rhode Island. He enlisted as a Landsman Ships Cook, then was promoted to a Ships Cook Fourth Class.3 This decision is likely indicative of George’s prowess in preparing food, as the promotion came with a substantial pay increase—ten dollars—and his term of service on site was unusually long for a cook.4 George was discharged on August 13, 1919, as a Ships Cook Second Class. Generally, ships cooks had to complete Navy cooking school after they concluded basic training. Navy cooks had to complete four month-long courses and were taught the basics of cooking, as well as how rations work and how a mess functions. The Navy Cook-Book had step by step instructions on every meal that ensured consistency.5 George was probably well prepared for duty as a Navy cook due to his lifelong connection to his father’s butcher’s shop. During World War I, the Navy escorted convoys across the Atlantic and sent ships to protect troop and supply movement in European waters. 6 Even though George did not go overseas, he played a vital role in preparing food for recruits at the Newport, Rhode Island Naval Training Station. 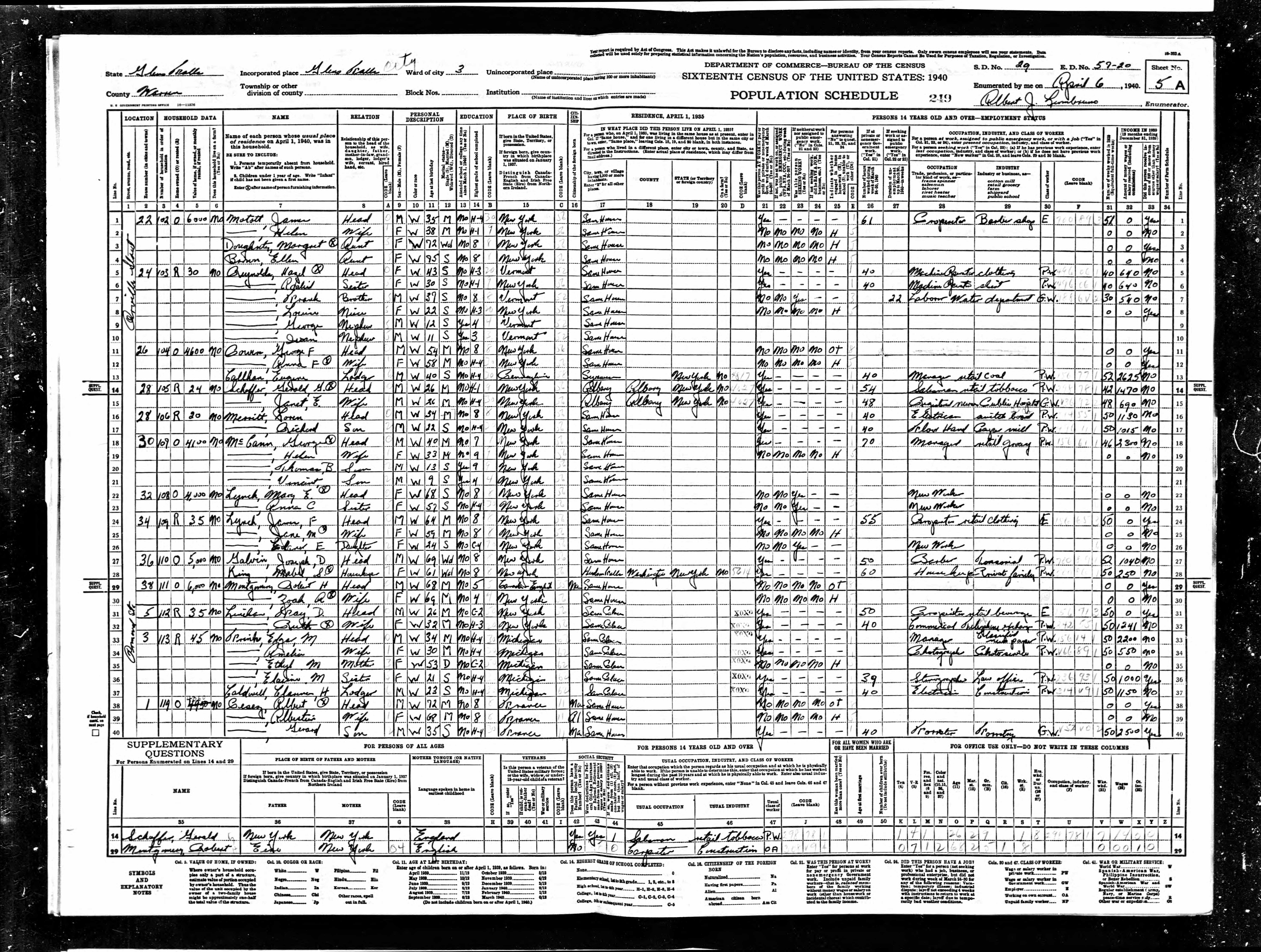 After leaving the military in August 1919, George moved back to New York where he met his wife, Helen. Helen Galvin was born in 1907 in New York, and completed a ninth grade education. They had their first child, Thomas Bernard McCann, on December 10, 19257 and married November 15, 1926.8 By 1930, they had moved to Glens Falls, New York, and had their second son, Vincent, the following year. George worked as a meat manager in Glens Falls for over a decade.9 The 1940 census, pictured here, shows that George made $2,300, which equates to roughly $40,000 in today’s market.10 In 1942, the family moved to Albany where they remained until 1958.11

George’s son Vincent remained unmarried while Thomas married Florida native Audrey Anne Christoph.12 Their union may have been why George and Helen moved to Florida. George’s older brother, Charles, married Delia and had four children: Anna, George J, Theresa, and Charles Jr.13 George was forty-three at the time World War II started so he did not serve, but his nephew and namesake served in the United States Army as a cook as well.14 George McCann managed to outlive his daughter-in-law Audrey and niece Theresa. George passed away on April 20, 1991 at the age of ninety-one and was laid to rest on April 23 in Florida National Cemetery in Bushnell.15 His son, Thomas, passed away in 2000, and his nephew, George J, passed away in 2006.16 The McCann family is a clear example of careers and military service spanning generations. George and his nephew played vital support and logistics roles—they fed, clothed, and supplied troops. George McCann’s life illustrates the importance of these roles and how family traditions of service and professionalism permeate the lives of America’s veterans.