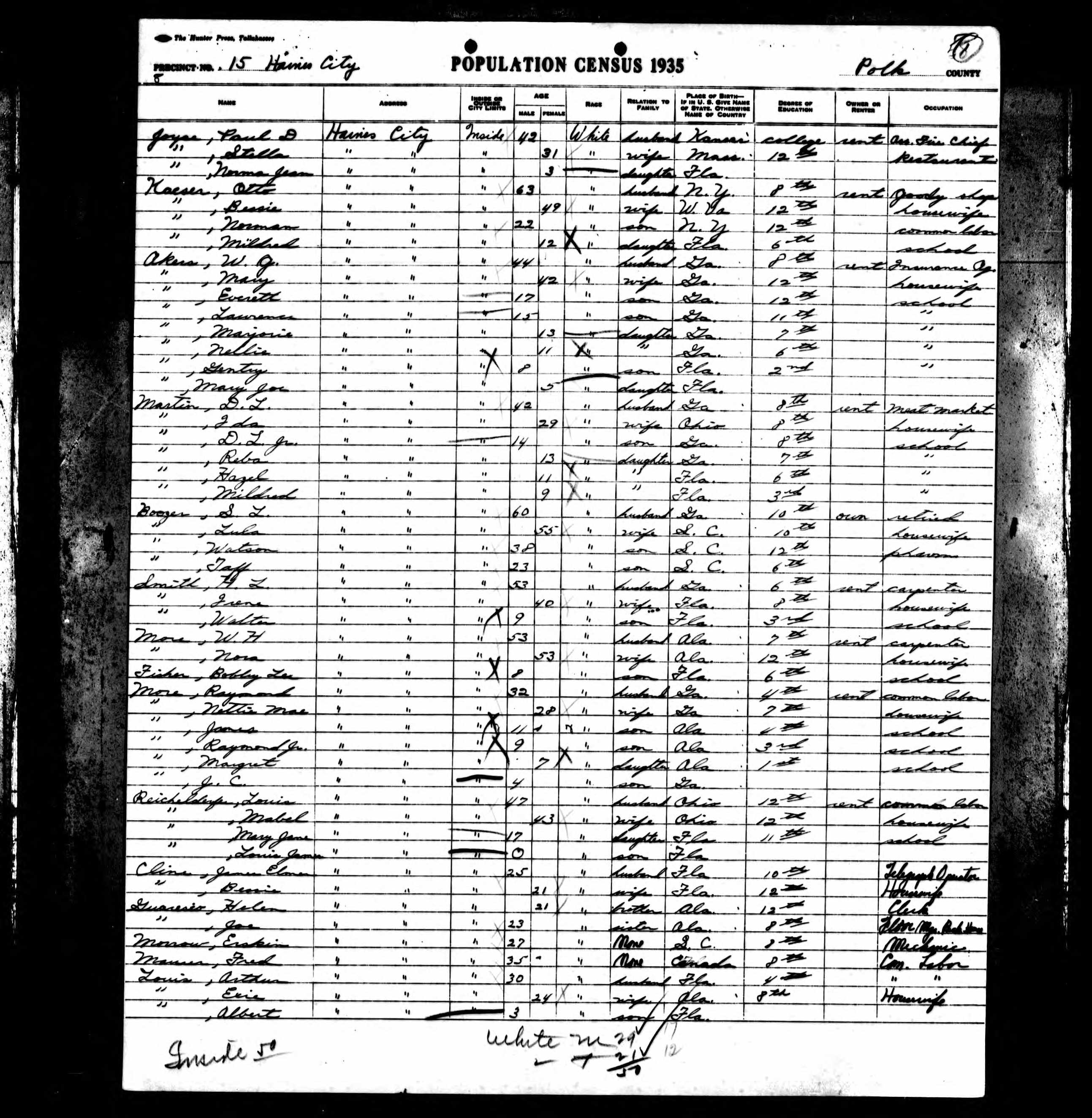 A native of Oxford, Alabama, James Lamarr Moore was the first of eight children born to Raymond R. and Nettie Mae Moore.1 The family moved several times during his childhood. In 1930, according to the US Census, the family lived in Double Run, Georgia, where James’s father Raymond worked as a farmer. By 1935, the family had moved again to Haines City in Polk County, Florida. According to the 1935 Florida Census, James’s father found work as a common laborer.2

As a farm family in the rural South, the Moores felt the brunt of the Great Depression. In 1933, Congress passed the Agricultural Adjustment Act, which paid farmers to reduce their production of crops in exchange for payments from the federal government to benefit both farm landlords and their tenant farmers.3 However, many landlords, rather than paying their tenants a share of the wages, simply dismissed them. The Moore family had to support three children at the time, and the agricultural crisis of Great Depression may have prompted them—like many Southern farm laborers—to move to the city in search of a regular income and steady work. By the 1940 US Census, James’s father held a job as a machine operator at a local plant.4

Growing up in Polk County, James graduated from Haines City High School in the early 1940s and worked as a part-time retail manager at the A&P store in Haines City until his enlistment in the United States Army.5 On October 4, 1942, Moore married Wilma Lorene Rodman in Polk County, Florida.6 Shortly afterward, on January 1, 1943 at the age of 19, Moore was drafted into the US Army and stationed at Camp Blanding, Florida. His draft registration card is seen here.7 Camp Blanding was one of the various camps and forts that arose following the mobilization of troops for combat. Unlike World War I, where combat troops trained to fight in the trenches of France, World War II saw combat fought in jungles, deserts, and mountains in Europe, Africa and Asia, depending on the theater. Thus, soldiers like Moore went through more intense training.8 While Army soldiers served in both theaters, the largest commitment of soldiers went to Europe.9 Regardless of Moore’s particular role in the Army during the war, which is not documented in available public records, the collective efforts of Army soldiers helped secure victory against both the Germans and Japanese. 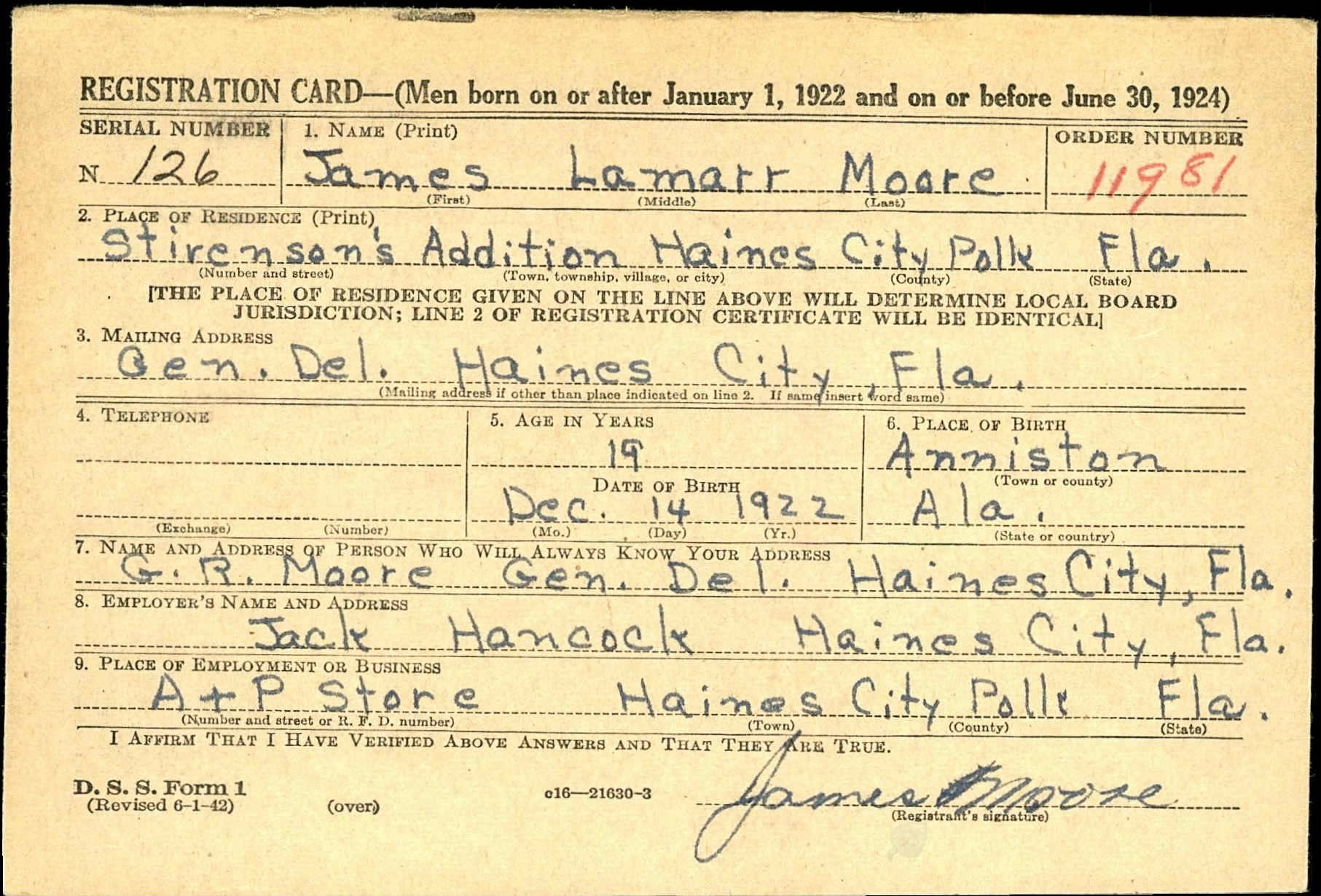 Moore would later serve in the Korean War, a conflict that began after North Korea, supported by the Communist countries of the Soviet Union and China, invaded South Korea on June 25, 1950. The United States led the efforts of the United Nations in supporting the South Koreans, providing over ninety percent of the troops of the United Nations’ forces, military equipment and supplies.10 The United Nations’ troops advanced into North Korea before the Chinese pushed them back into South Korea, eventually turning the war into a stalemate reminiscent of World War I. Ultimately, an armistice stopped the open conflict in 1953, though skirmishes presently continue.11 The troop count from the United States rose from only 510 servicemen before the North Korean invasion to over 326,000 men, bringing soldiers like Moore into the conflict. Moore eventually retired in 1963 with the rank of Major.12

Moore spent the rest of his civilian life in Central Florida, settling in Winter Park. He and Wilma eventually had four children: Dewey, Kay, Omaha, and Janice. After his retirement from the military, he owned and operated GEICO Insurance offices in Orlando and Homestead.13 Afterwards, he served as a partner in the Fed Chek organization, where he served as the senior vice president. He and Wilma remained together until her death in 1988 after forty-six years of marriage. Her headstone reads “Together Forever,” revealing the strong and loving marriage the couple had. Five years after Wilma’s death, Moore remarried on March 6th, 1993 to Betty Louise Stallings. He also became a stepfather to her children, Vicki, Diane, and Bobby Stallings.14

James and Betty enjoyed fishing and owned their own small bass boat. One day, they set out on a fishing trip with another couple when a violent storm hit and overturned the boat. The group spent twenty-four hours afloat in the water with James and Betty tethered to their boat and the other couple attempting to swim to shore. Just before two fishermen discovered them, James suffered from heart failure. Efforts to bring the Moores to shore proved successful, but ultimately Moore passed away at Gulf Pines Hospital on June 26, 1994.15 Moore and his first wife, Wilma, are interred, together forever, at the Florida National Cemetery in Bushnell, FL.15