By Caroline Heumann and Harper Norris

Ralph Edward King was born on May 2, 1920, in Sanford, Florida, to Ralph and Marie King.1 His father was born in Florida and his mother, an immigrant, was born in Honduras.2 The family visited Honduras when Ralph Jr. was six years old. Passenger lists show that Ralph Jr. and his parents traveled from Puerto Cortes, Honduras, to New Orleans on the SS Copan in 1926.3 Ralph’s sister, Lucille, was born in 1929. A World War I veteran, Ralph’s father worked as a foreman on a truck farm in 1930.4 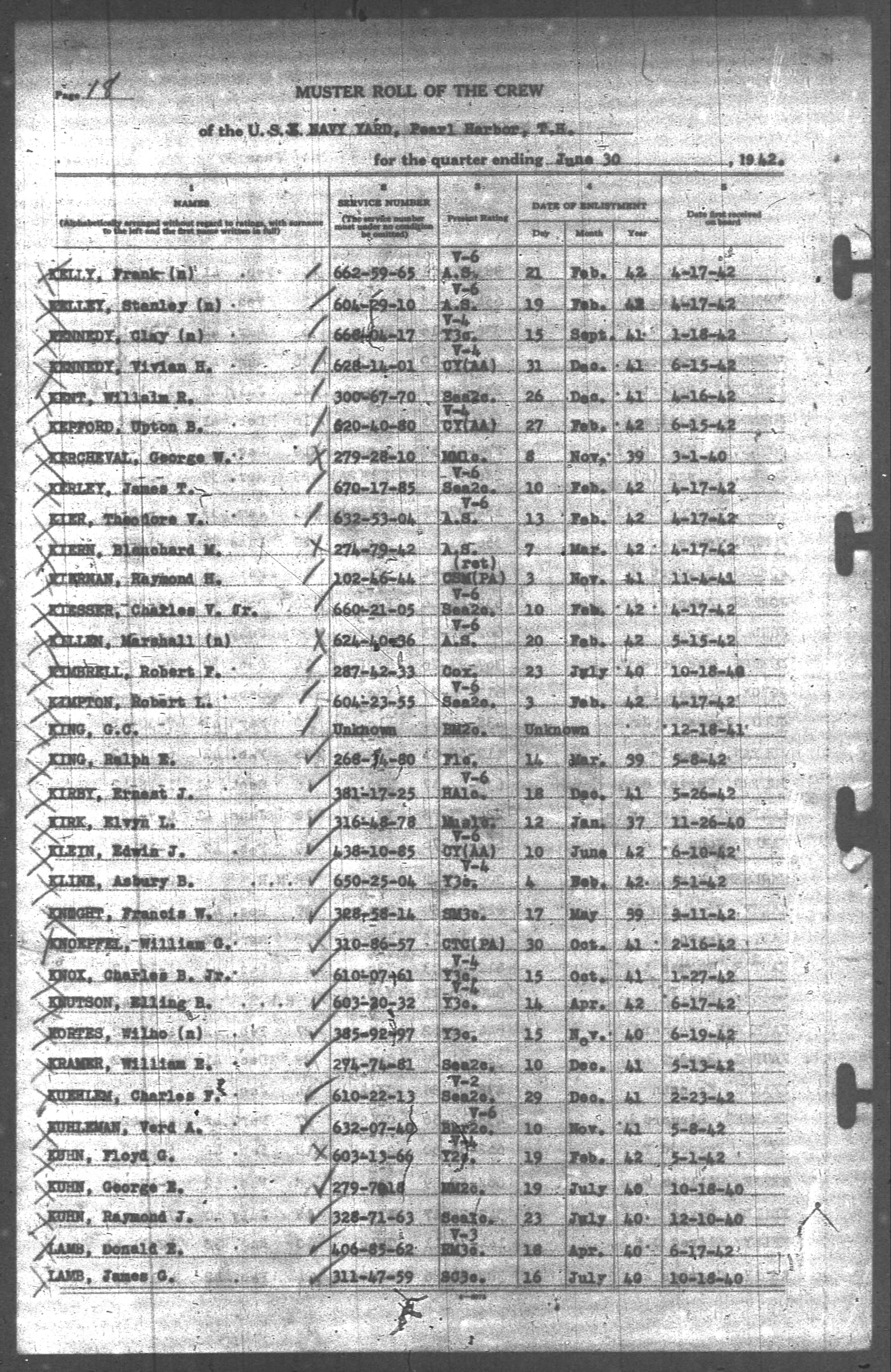 Ralph E. King enlisted in the US Navy on March 14, 1939. As seen in this 1942 muster roll, he was assigned to the Dobbin-class destroyer USS Whitney in Pearl Harbor, HI.5 According to the commanding officer of the USS Whitney, approximately ninety percent of the crew were on board when the Japanese attacked Pearl Harbor on December 7, 1941. This means it is highly likely that King was on board during the attack, in which the USS Whitney suffered no damage or losses among the crew. In the report, N.M. Pigman writes: “The personnel on board were calm and unexcited throughout the engagement. They manned their battle stations efficiently and carried out all orders promptly and without confusion. All officers and men of the Whitney are deserving of the highest praise for their conduct during the engagement.”6

Photo of the USS Deliver Rescue and Salvage Ship

King and the crew of the USS Whitney were fortunate to escape the attack on Pearl Harbor unscathed, as twenty-one ships in the Pacific Fleet were sunk or damaged and more than 2,400 American casualties were reported.7 In January 1943, King and the USS Whitney were deployed for World War II. No specific information regarding their engagements, mission, or specific deployment could be located.8 The Whitney returned to Pearl Harbor in January 1946, and sometime between then and October of the same year, King was transferred to the USS Deliver, a Diver Class Rescue and Salvage Ship, pictured here.9 The NavSource naval history website describes the mission of the USS Deliver after World War II as “occupation and China service in the Far East.” In July 1946, the USS Deliver was assigned to “Joint Task Force 1, Task Unit 1.2.7 Target Vessel Group” which operated as salvage units for Operation Crossroads, the atomic bomb tests at Bikini Atoll.10 At the time of his discharge, King held the rank of Engineman Chief Petty Officer. King spent time as a Chief Engineer for the Merchant Marines; however the details of his service are unknown.11

After leaving the Navy, King returned to Sanford and married his wife, Norma. In 1956, he moved to Lutz, a small town in Hillsborough County, Florida where he would live out the rest of his days.12 Ralph Edward King passed away on May 17, 1995, at the age of 75.13 He is memorialized in section MC, site 64, at the Florida National Cemetery in Bushnell, FL.14