Leroy Joseph Zavada was born on November 27, 1926, in the suburbs of Pittsburgh, Pennsylvania. His parents, Joseph and Mary Zavada, were Czech immigrants who came to the United States in 1910, when Czechoslovakia was still a part of the Austro-Hungary Empire1. Joseph and Mary Zavada immigrated only a few years before the start of World War I and consequently just prior to the creation of an independent Czechoslovakia in 1918. 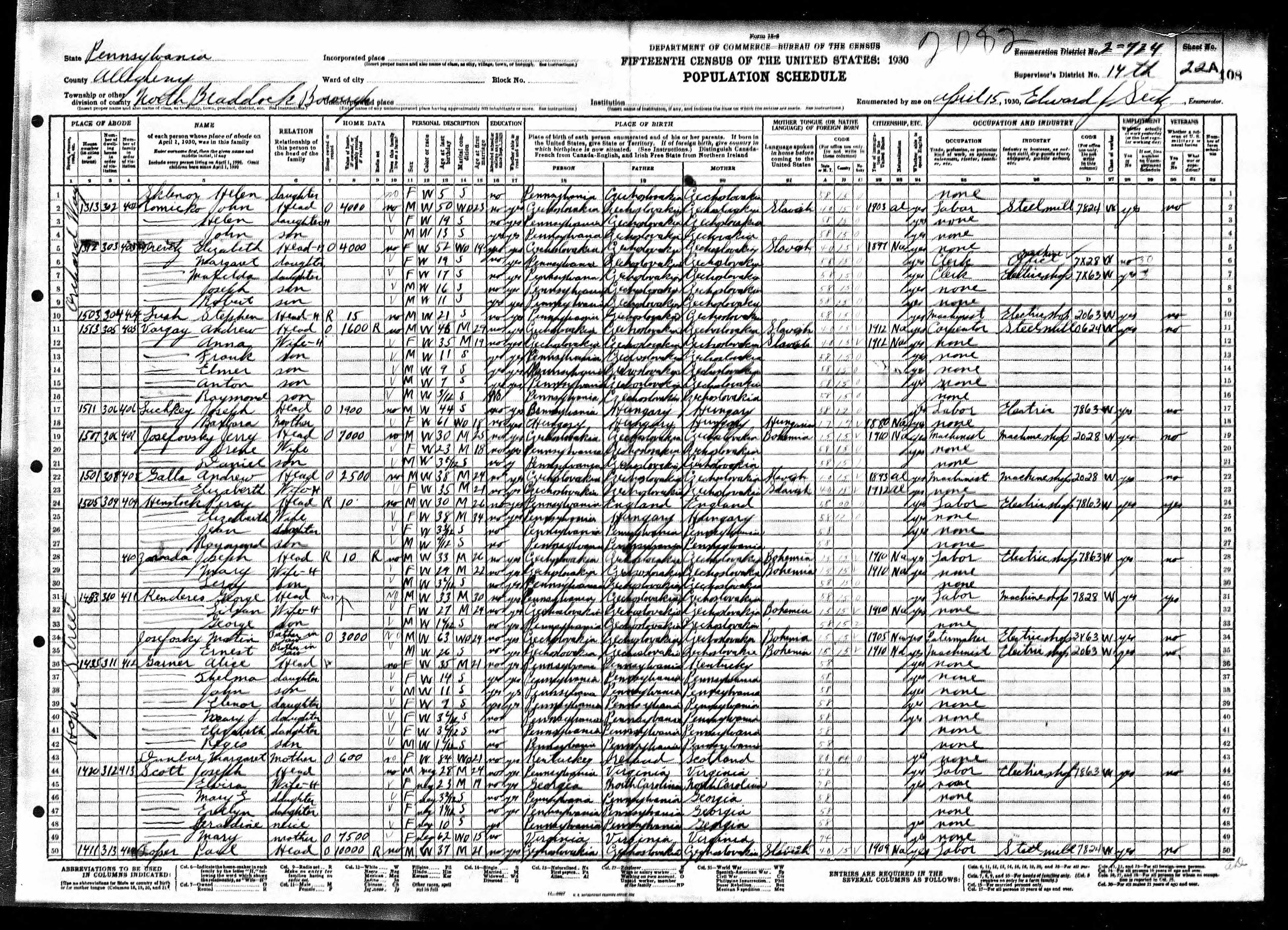 The 1930 census, shown here, indicates that the Zavada family spoke Bohemia (Czech), so it is likely that Leroy grew up bilingual, speaking his parents’ native language at home. The Zavadas lived in a predominantly Eastern-European neighborhood, as the census lists their neighbors as immigrants from Czechoslovakia and Hungary. Although some of their neighbors spoke Bohemia like them, others spoke Slovak—a similar language despite Czechs and Slovaks having different cultures. Under the Austro-Hungary Empire, the Czech-speaking areas were under Austrian rule while Slovakia was part of the Kingdom of Hungary.

Neither Joseph nor Mary had any formal schooling, but they could both read and write. In 1930, Joseph worked as a laborer in an electric shop to support his wife and their then three year-old Leroy. By 1940, Joseph was a machinist for a manufacturing company, and the family had a second son, Arnold.2 Records indicate that Joseph likely worked for Westinghouse Electric Corporation, a Pittsburgh-based electric company, for his entire career.3 This job provided steady employment that allowed Joseph to support his family during the Great Depression.

On April 7, 1945, Leroy enlisted in the Army. At that point, he had four years of high school education and was eighteen years old. The Zavada family, as well as other Czech-Americans at the time, probably read the newspaper reports of the Nazi invasion of the Sudetenland and Czechoslovakia. Perhaps this is what influenced the young Leroy to enlist. Leroy’s father, Joseph, registered for the draft in 1942 when he was forty-four years old. However, it seems unlikely, because of his age and the importance of his job with Westinghouse, that he ever served.4

Around July of 1945, Zavada enrolled in the Army Air Force Training Command’s basic airplane and engine mechanics course at Keesler Field, Mississippi.5 At the time, what we now call the Air Force was a part of the US Army. At Keesler Field, Zavada learned how to maintain and repair aircraft through a general course of seventy-six days and a specialized supplementary course of thirty-six days.6 The war ended by September of 1945, a few months after Zavada’s enrollment at Keesler Field, so he never saw combat. His veteran compensation records indicate that he served in the foreign service for four months, but we do not know where.7 Most likely, he served those four months as part of the Allied occupation following the war. During his time in the service, he rose to the rank of Sergeant.8

In June of 1949, Zavada graduated from the Pennsylvania State College of Optometry in Philadelphia, becoming Dr. Leroy J. Zavada.9 It is possible that Zavada was able to go to college with the help of the veteran benefits from the G.I. Bill. Zavada’s optometry studies served him well. By 1990, he was still a doctor and advertised his office in the Pittsburgh Post-Gazette, shown here.10 While his parents had no formal schooling, Leroy Zavada was able to receive a college education that gave him a career that supported him for the rest of his life.