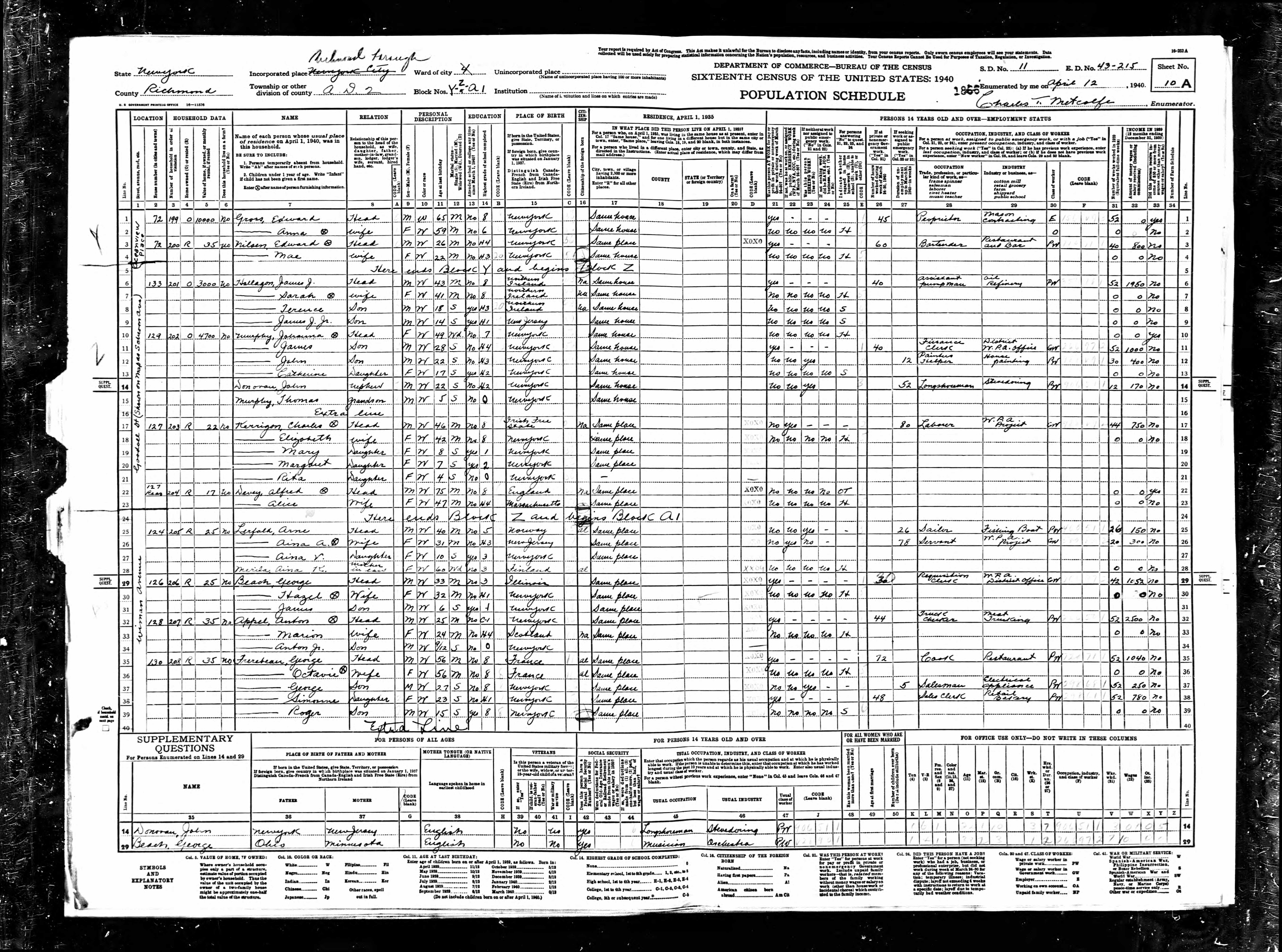 On April 3, 1922, Terence Patrick Halligan was born to James and Sarah Halligan in Northern Ireland, then part of the Irish Free State. James Halligan emigrated to the United States in 1922, followed by Terence and his mother Sarah in 1925.1 Congress passed the 1924 Immigration Act to stem the flow of immigrants from certain countries by establishing quotas based on 1890 US Census population figures. While these quotas greatly affected groups from Southern and Eastern Europe, the law had less of a direct impact on the flow of Irish immigrants based on 1890s census figures. The numbers declined after Irish independence in 1921 and the Great Depression.2 The family settled in Bayonne City, New Jersey across from New York City, where Halligan’s parents bore another son James Jr. around 1926. The 1930 US Census shows Halligan and his family residing in Bayonne City where James Sr. worked as a pumper at an oil refinery.3 Pumpers helped operate the pumps and auxiliary equipment to produce the flow of oil and gas from the wells.4

By 1935, the family settled in the New York City borough of Staten Island, also known as Richmond Borough. The 1940 Census, pictured, shows Terence Halligan at the age of eighteen, and then in the fourth year of high school. Halligan’s father continued to work at the oil refinery, holding the position of assistant pumpman where he gained a yearly income of $1950. By 1940, Halligan and both of his parents gained United States citizenship through naturalization, as seen here.5 After finishing high school, Halligan worked as a longshoreman. Longshoremen helped with loading and unloading cargo on ships as well as performing other various dockside functions.6

On March 20, 1942, in New York City, Halligan enlisted in the US Army Air Corps.7 He soon received his assignment with the 12th Air Force Command under the 320th Bombardment Group in the 441st Bomb Squadron, formed on June 19, 1942 at MacDill Field in Tampa, FL. The 320th Bombardment Group served in the North African and Mediterranean theaters of World War II from December 1942 to the conclusion of the war in Europe in 1945.8 Overseas, Halligan worked as a navigator on a Martin B-26 Marauder, holding the rank of Second Lieutenant. The 320th Bombardment Group operated primarily out of the Decimomannu Air Base on the island of Sardinia, part of Italy. The unit focused on providing air support and bombing targets to aid the Allied advance into Axis Italy.

Halligan’s first mission out of Decimomannu Air Base came on February 21, 1944. Halligan then flew other Italian missions on March 2, 10, 11, 15, and 16.9 Allied missions—the targeting of rail yards in Florence and Rome, as well as gun concentrations in the towns of Cisterna, Aquino, and Cassino—sought to weaken the German defensive lines spanning the Italian peninsula. The German-led Axis forces sought to hold the primary Gustav Line along with the Bernhardt and Hitler/Senger Lines, which were deemed integral to preventing the Allied forces from marching to Rome. The Gustav Line contained treacherous and formidable terrain for the Allies as breaking through the Gustav Line required ousting the Germans from their position in Cassino.10 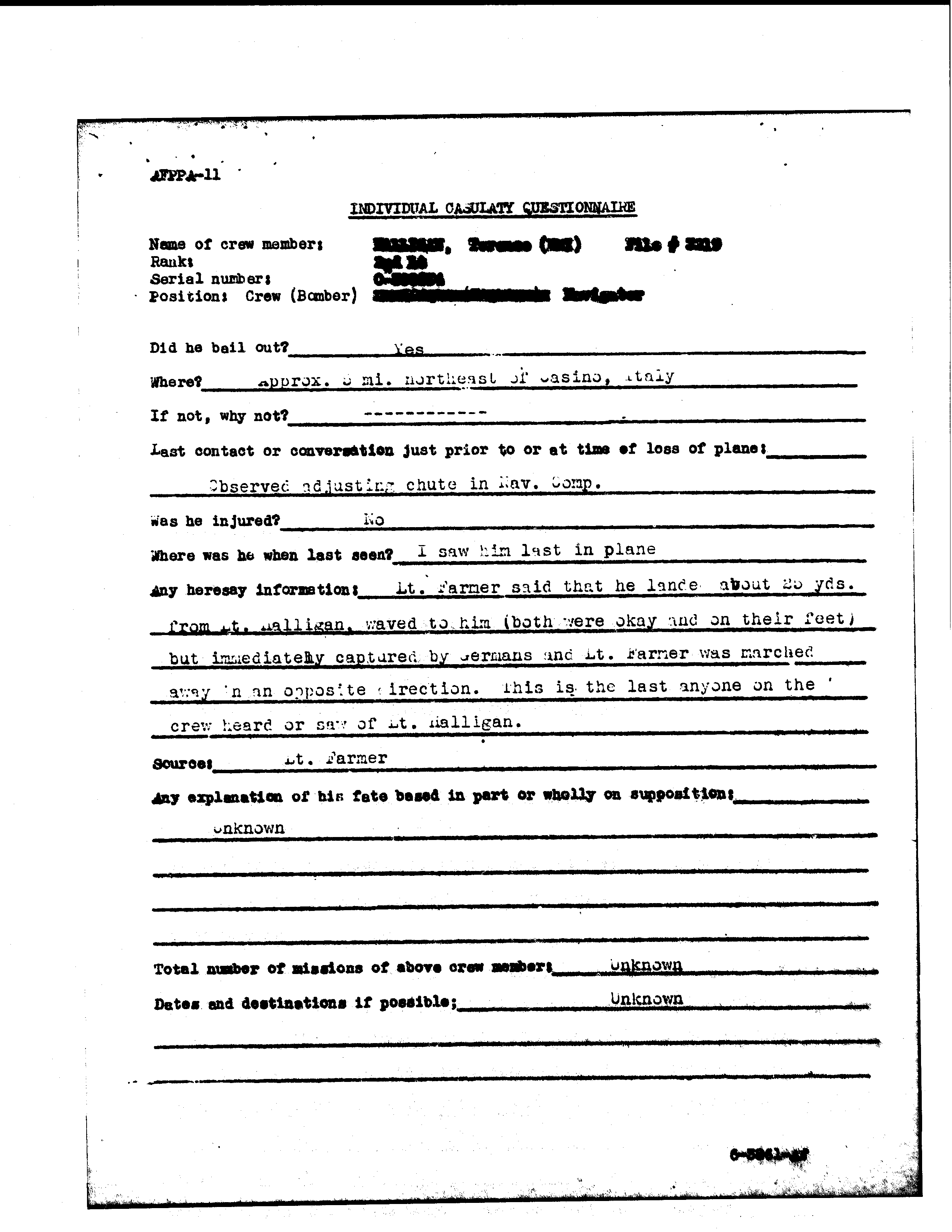 On March 16, 1944, Halligan left Decimomannu Air Base in Sardinia for a combat mission with the intended target north of Aquino, Italy—a town seven miles northwest of Cassino. The mission involved destroying gun emplacements at an area of heavy gun concentrations. After sustaining damage to the right side of the plane from anti-aircraft fire, all the crew members successfully bailed out before the plane crashed at 41° N, 13° E at 11:12 AM.11 According to the War Department Headquarters report #3219, seen here, the co-pilot, Vernon Schulz, reported that all the men "reached the ground safely," but that he did not see Halligan after bailing out. Other members of the crew reported being unsure of Halligan's status after bailing out. Second Lieutenant Rudolph Farmer, the mission's bombardier, reported that he and Halligan landed about twenty-five yards from each other and that both appeared "okay and on their feet." However, the two men were split up after their capture by the Germans. Halligan's interaction with Farmer is likely "the last anyone on the crew heard or saw" of him. It is probable that Halligan’s death came before reaching a prisoner of war camp, as he does not appear on a War Department document listing the mission crew's places of internment.12

The military officially reported Halligan missing in action on the Roster of WWII Dead on August 18, 1945, where the document lists his rank of First Lieutenant and his disposition as non-recoverable.13 For his actions, Halligan earned an Air Medal with Three Oak Leaf Clusters and a Purple Heart. The Army gave the Air Medal award to persons who, while serving in the Army, distinguished themselves by meritorious achievement while participating in an aerial flight.14 The Purple Heart, first issued as the Badge of Military Merit by then General George Washington in 1782, fell into disuse until 1932 when General Douglas MacArthur revived the award as the Purple Heart in honor of the bicentennial of Washington’s birthday. Since 1942, the military has awarded the medal to soldiers wounded or killed in combat. The Florida National Cemetery in Bushnell, FL, placed a memorial headstone in memory of Halligan and his service.15 In addition, Halligan is memorialized on the Tablets for the Missing at the Sicily-Rome American Cemetery and Memorial in Nettuno, Italy.16