By Kyle Harrison and Gramond McPherson

Born on September 5, 1925 to Segundo Ramos, a US soldier, and Paula Rivera de Ramos in Puerto Rico, Gil Ramos-Rivera grew up the second-youngest of five children alongside older sister Merida, his older brothers Jose and Jorge, and his younger sister Nazarea.1 The United States gained control of Puerto Rico from the declining Spanish Empire after the Spanish-American War in 1898. The Jones Act of 1916, implemented in March of 1917, granted American citizenship to all residents of Puerto Rico. While Puerto Rico’s previous territorial status allowed the military to conscript them into service, since gaining citizenship, even larger numbers of Puerto Ricans, including Ramos-Rivera’s father Segundo, served in the United States military.2 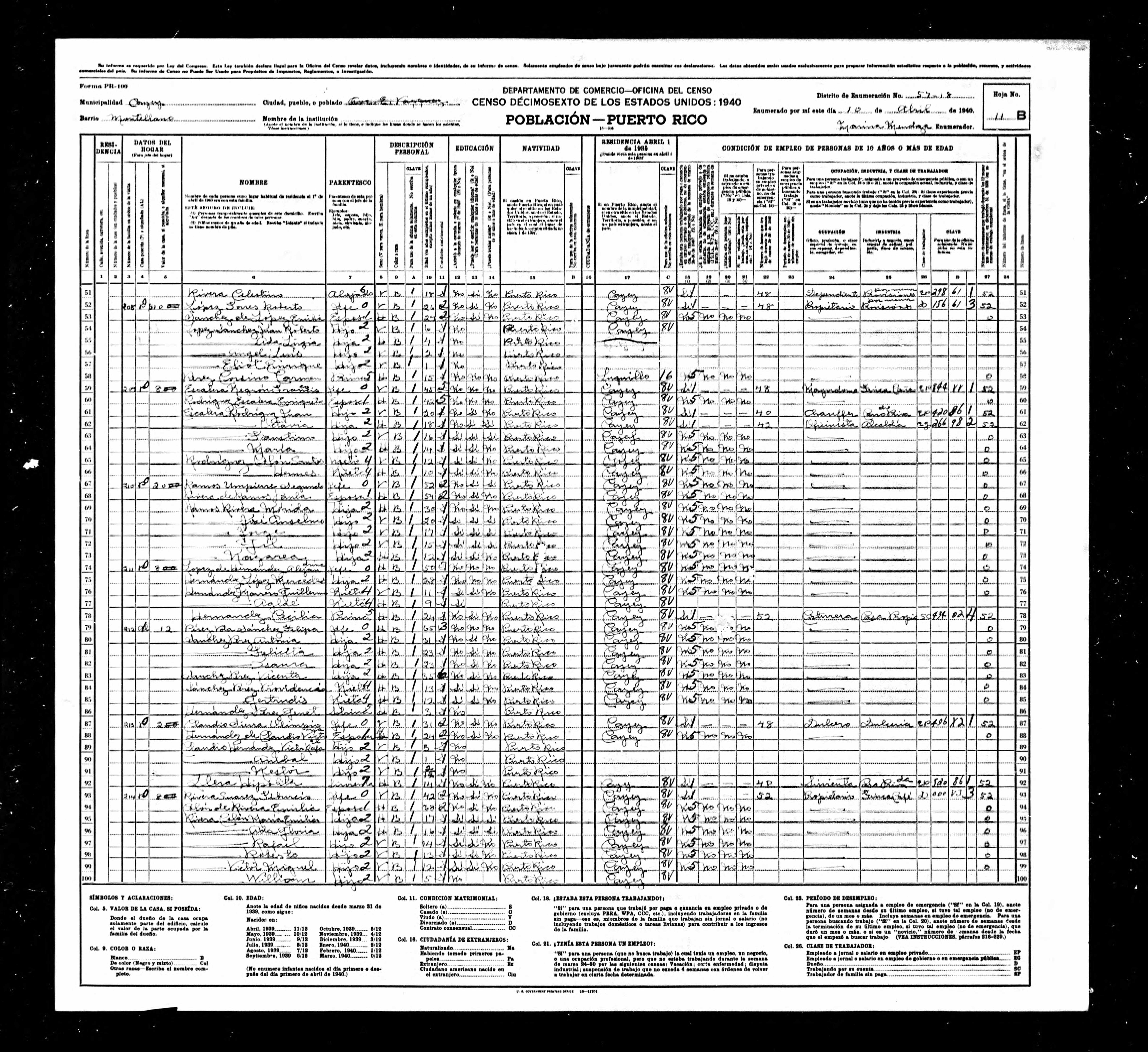 Ramos-Rivera grew up with his family in the municipality of Cayey in Puerto Rico. Cayey served as the location of a Naval facility, the El Cayey Naval Radio Station, and Henry Barracks, an Army post. Soldiers like Ramos-Rivera’s father served in the military for two reasons: to provide their family with steady income, and for the prestige of serving as a soldier in “being a cut above other men in society.”3 By 1920, the base served as the home of several regiments including the Puerto Rican 65th Infantry Regiment. Puerto Rican troops aided the United States’ interventions in Central America and the Caribbean in the early years of the twentieth century-known as the Banana Wars.4 As such, the 1930 Census shows Segundo Ramos as a soldier stationed at Henry Barracks. Three-year-old Gil and his family depended solely on his father Segundo’s salary as a soldier as the rest of the family listed no occupation.5 By the 1935 Puerto Rican Territorial Census, Gil, now ten and a fluent English speaker, continued to live at Henry Barracks with his family.6 In May of 1937, Ramos-Rivera’s father retired from the military with the rank of first lieutenant.7 After his retirement, the 1940 Census shows Gil and his family continue to reside in Cayey (as seen here), settling in the city of Monte Llano.8

Following in his father’s footsteps, on October 10, 1950, Ramos-Rivera enlisted in the United States Army. His entry into the military coincided with the beginnings of the Korean War. The conflict began as North Korea, supported by the communist countries of the Soviet Union and China, invaded South Korea on June 25, 1950. The United States led the efforts of the United Nations in supporting the South Koreans, providing over ninety percent of the troops of the United Nations’ forces, military equipment, and supplies.9 As a result of the end of racial segregation during the early 1950s, more English-speaking Puerto Ricans like Ramos-Rivera began to serve in non-Puerto Rican units.10 As the war continued, the United Nations’ troops advanced into North Korea before the Chinese pushed them back into South Korea, eventually turning the war into a stalemate reminiscent of World War I with trench warfare in France. Ultimately, an armistice stopped the open conflict in 1953, though skirmishes presently continue.11 In all, a total of over 43,000 Puerto Ricans like Ramos-Rivera served in the Korean War.12

Ramos-Rivera continued his service in the Vietnam War. The North Vietnamese Communists fought against the anti-Communist South Vietnamese supported by the United States. While Americans served in a limited capacity in the 1950s with only 700 troops, by 1969, American forces reached their peak of over 543,000 soldiers in Vietnam.13 Counting Puerto Ricans living in their native country, over 48,000 troops served in Vietnam. While Ramos-Rivera spoke fluent English, the desperate need for recruits saw the Defense Department relax their policy of enforcing an English immersion course for Puerto Ricans, thus sending many Puerto Rican recruits to Vietnam without proper language skills.14 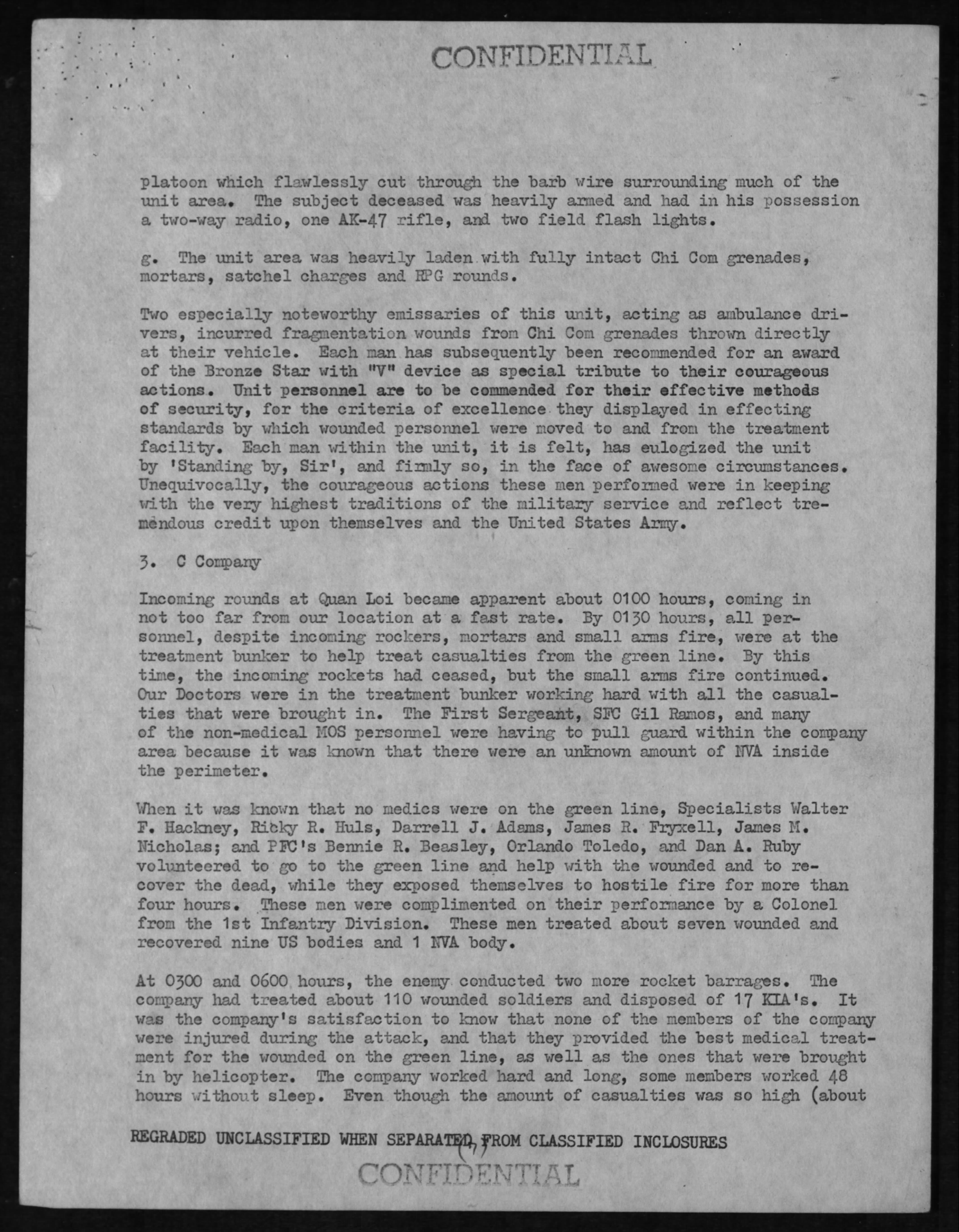 Ramos-Rivera saw firsthand the heat of battle during Vietnam. Many infantry troops often moved in a “long green line”, meaning that the unit marched in a single file line.15 On one occasion during the 1969-1970 time frame, one such unit came under heavy fire by the North Vietnamese Army. The 15th Medical Battalion within the Airmobile 1st Cavalry Division sought to recover and treat casualties, placing themselves in danger as the enemy encroached on their perimeter. Ramos-Rivera, now a sergeant first class, and other non-medical personnel (as seen here) sought to protect the battalion as the doctors worked to care for the casualties. Fortunately, no injuries occurred for members of the medical company who received a Valorous Unit Award in 1970. In addition, sometime during his twenty-year career in the Army, he received a Purple Heart. The predecessor award, the Badge of Military Merit issued by then General George Washington in 1782, fell into disuse until 1932 when General Douglas MacArthur revived the award as the Purple Heart in honor of the bicentennial of Washington’s birthday. Starting in 1942, during World War II, the military awarded the medal to soldiers wounded or killed in combat. Typically, the military issues the award to soldiers like Ramos-Rivera who met certain criteria of injury that occurred during hostilities and documented by a medical officer.16 These honors and recognition reveal the quality of Ramos-Rivera’s service to this country. Reaching his twenty years of service, Ramos-Rivera retired from the Army on November 1, 1970.

After his retirement, Ramos-Rivera eventually moved to Florida. From the 1940s to 1980s, large numbers of Puerto Ricans migrated to the United States mainland for better opportunities and to escape the poverty that existed in Puerto Rico.17 Ramos-Rivera settled in Orlando where he lived for the rest of his life. On March 17, 1996, Ramos-Rivera passed away at the age of seventy. Florida National Cemetery in Bushnell, Florida placed a memorial headstone in honor of Ramos-Rivera and his service to this country.18 His service in the heat of intense battle and the affirmation of his service by the military deserves praise and gratitude.