On March 22, 1923, Ernest and Rose Boese gave birth to their son, William “J.J.” Boese, in Joliet, Illinois.1 He grew up the second of five children: his older brother Edward, his younger sisters Ethel and Elsie, and a younger brother James. With German ancestry on his father’s side, Boese’s father also grew up in Illinois. His mother Rose immigrated to the United States from Italy in 1920.2 While Italian male migrants outnumbered females three to one, Italian women like Rose also immigrated, forming families and working.3 It is estimated that over five million Italians immigrated to the United States through Ellis Island between 1870 and 1920, with the majority coming from the southern regions of Italy, a rural and poor area. While many remained in the urban Northeast in places like New York City, others moved to the Midwest.4

By the 1930 Census, William and his family continued to live in Joliet where his father Ernest worked as a brakeman in the railroad industry.5 The job of a brakeman involved climbing atop a train and manually turning a large brake control to engage the train’s brakes in cases where the airbrakes failed to work. Brakemen risked their lives to stop trains. Sometimes especially hazardous conditions, like bad weather, caused accidents; in other cases, routine actions like failed attempts to climb aboard the train led to death or injury. 6 William Boese's father continued to work as a brakeman within the railroad industry into the 1940s, which gave the family stability during the Great Depression. The family owned their home in Joliet, worth about $5000. By the 1940 Census, Boese listed his occupation as a new worker, dropping out of school after his first year of high school.7 The 1940 Census classified new workers to measure individuals with no permanent job for a month or more, especially young people who finished their schooling in recent years but could not find work.8

Service: Supplying the War Effort in the Pacific

After the attack on Pearl Harbor brought the United States into World War II, thousands of young men enlisted in the military. Boese, now nineteen, enlisted in the United States Marine Corps on August 26, 1942. Before World War II, the Marines built a tradition of fighting America’s “small wars” south of the US border. However, as the Marine Corps became an amphibious force fighting in the Pacific Theater, the Marines gained a greater prominence.9 As a Marine, Boese trained as part of the Third Recruit Battalion at the Marine Corps Base in San Diego before moving to Camp Elliott, also in San Diego, in October of 1942.10 Afterward, he transferred to the Marine Barracks at the Roosevelt Naval Air Station in Long Beach, California to prepare for service in the Pacific. 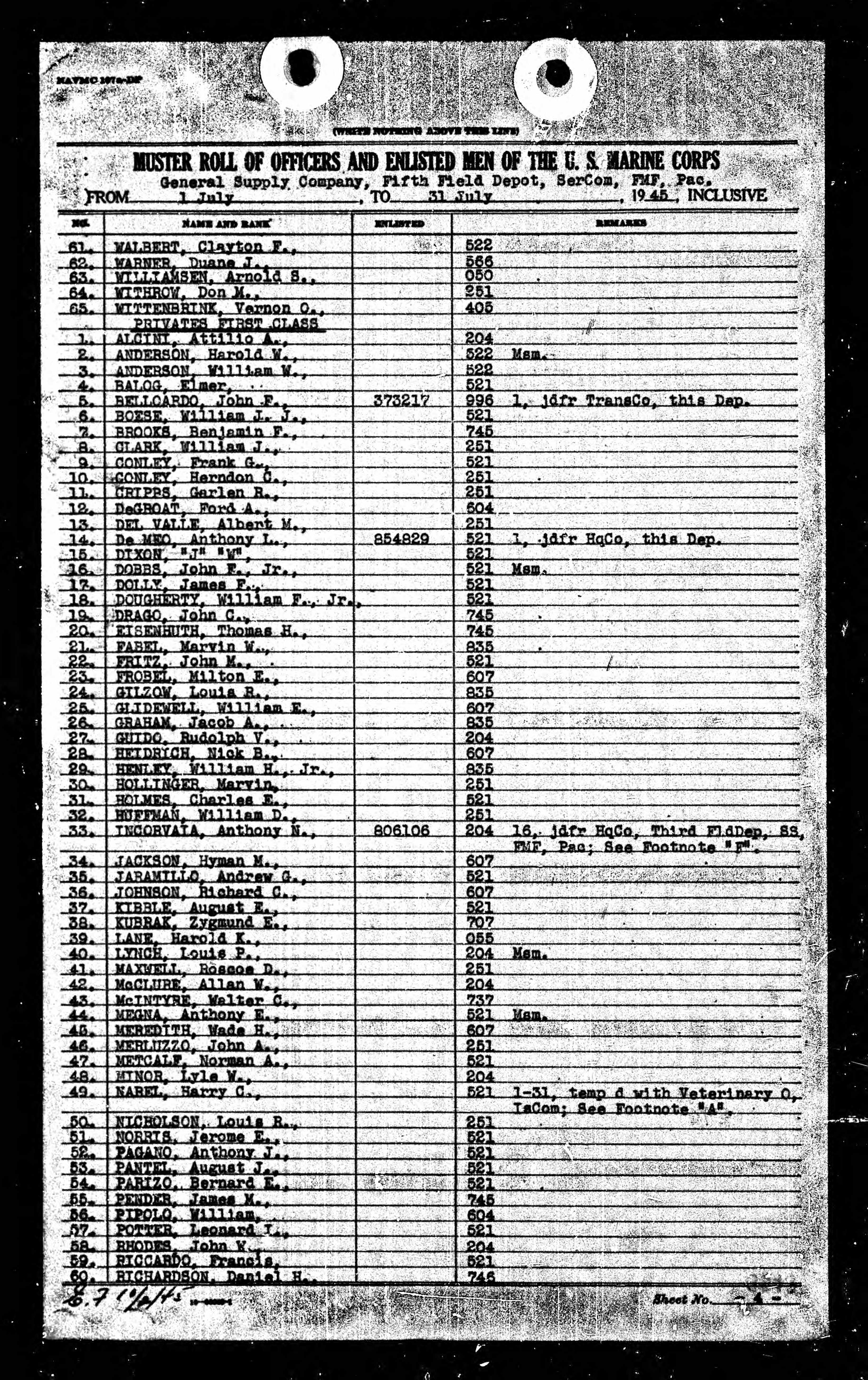 By April of 1943, Boese began serving as part of the Supply Service component of the Fleet Marine Force, Pacific, as part of the 4th Base Depot.11 The War Department activated the 4th Base Depot on the small Banika Island, part of the Russell Islands located on Solomon Islands.12 The Russells served as the base for Operation Toenails, the 1943 campaign that sought to capture the New Georgia Islands, preventing the Japanese from controlling the islands. The islands upon capture offered more potential airfields, as well as an area for future operations. Marines like Boese helped to ensure the success of the operation.13 In April of 1944, Boese transitioned to the 5th Field Depot serving at first in its Ammunition Company. By October of 1944, he moved to the General Supply Company where he continued to work as late as July of 1945.14 The War Department activated the 5th Field Depot on Banika Island in February of 1944 to support the III Amphibious Corps with ammunition and other general supplies. This Amphibious Corps helped liberate Guam from the Japanese in 1944.15 Through his service in the Marines, Boese maintained the rank of Private First Class, as seen here. 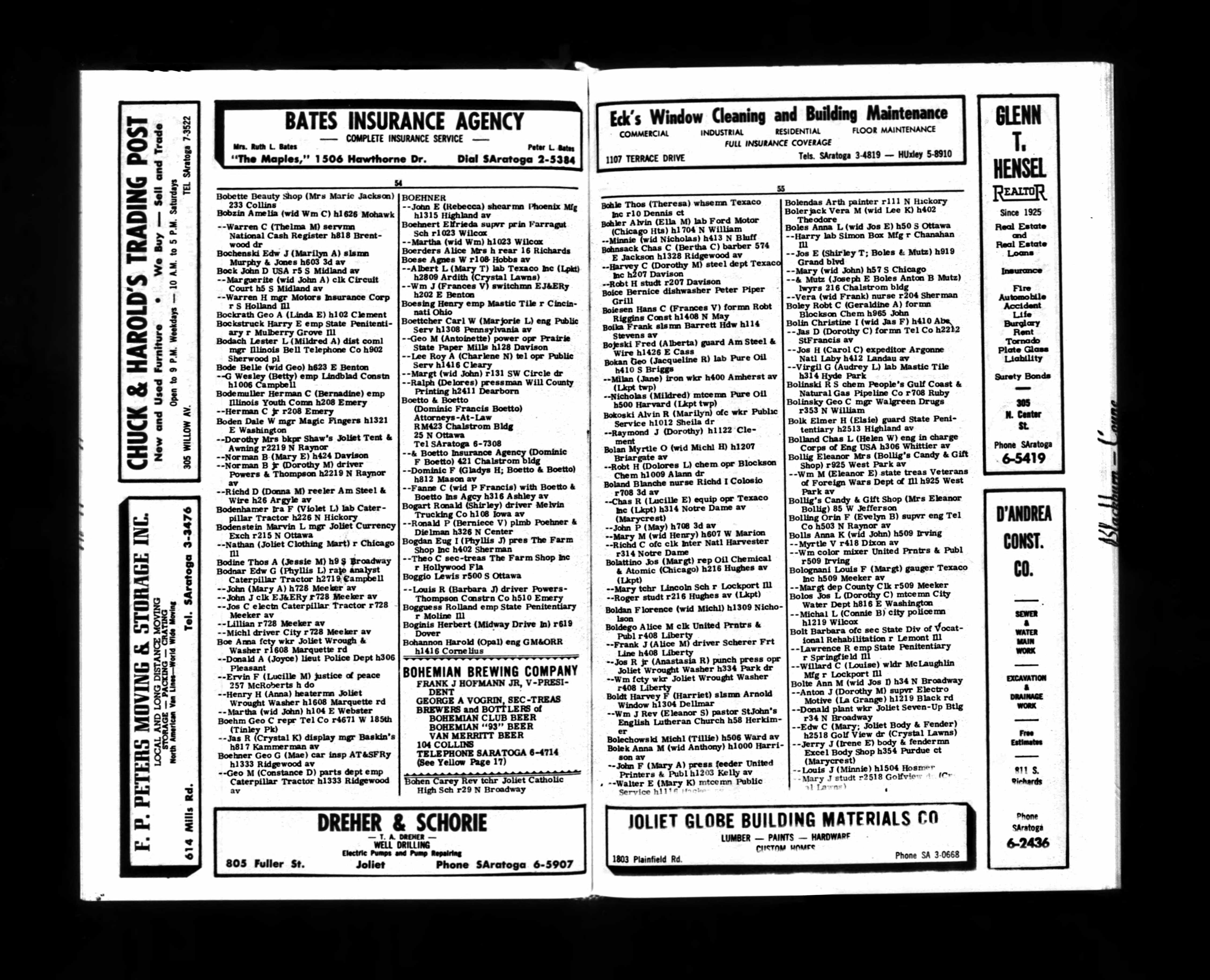 After the war, Boese moved back to his hometown of Joliet where he married his wife Frances and fathered two daughters, Aldene and Arlene. 16 Following in his father’s footsteps, Boese also worked in the railroad industry as early as 1946 for the Elgin, Joliet, and Eastern Railway. By 1950, Boese continued working for the company as a switchman, a position he maintained into the 1960s, as seen here.17 Switchmen, also called yardmen, held important responsibilities such as moving train cars around and hooking them together to make new trains. Like Boese father’s job as a brakeman, a switchman risked suffering life-threatening injuries or death.18 Boese worked in an industry in decline after World War II. With the expansion of the highway system beginning in the 1950s and commercial air travel by the 1960s, the railroad industry steadily shrank with fewer passengers, causing deep financial trouble for many railroad companies. By 1971, Congress stepped in to relieve railroads of the costs in operating passenger trains, creating the National Railroad Passenger Corporation to take over long distance train service for nearly all the railroad carriers.19 Boese likely continued working in the railroad industry into the 1970s before moving his family to Florida by 1978. The family first settled in Tampa before moving to Odessa in Pasco County in 1979.20 On February 22, 1996, Boese passed away at the age of seventy-two. Florida National Cemetery in Bushnell, Florida placed a memorial headstone in honor of Boese. From his service in supplying support while in the Marines to his service on the railroads, Boese’s life reflects his commitment to hard work.