By Courtney A. Blair 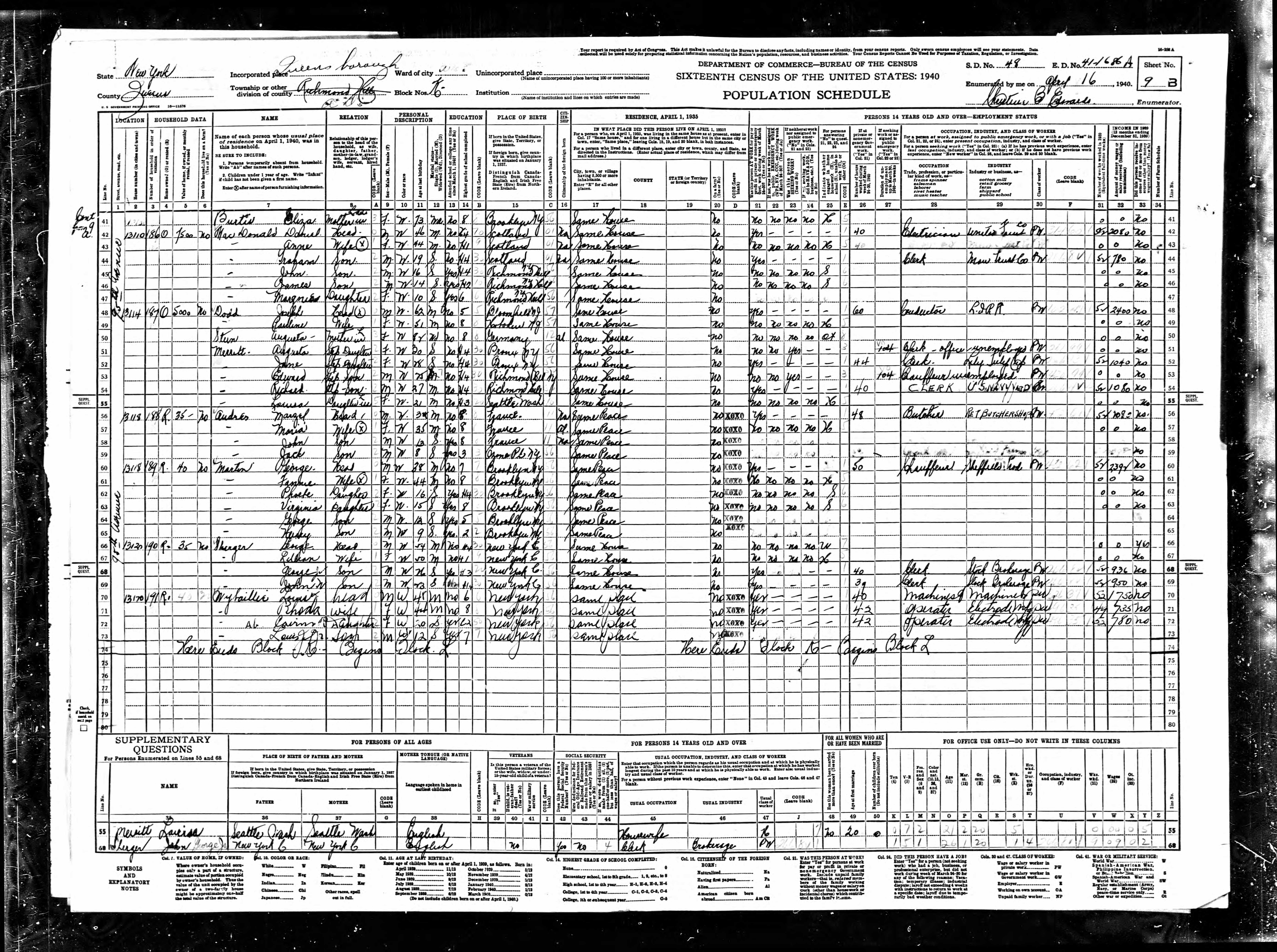 On August 9, 1926, Marcel and Marie Andres gave birth to their firstborn son John Marcel in Paris, France.1 However in 1929, the family immigrated to the United States where they settled in Queens, New York.2 While French migration to the United States declined during World War I, the aftermath of the war saw its resumption, especially from the northern and eastern regions of France devastated by the war. Many migrants during the 1920s went to New York, New Jersey, Illinois, and California. Unfortunately, the Andres family's arrival in New York coincided with the collapse of the stock market in October of 1929. Immigration to the United States declined sharply during the Great Depression.3 However, the Andres family survived the crisis. The 1930 Census shows a young John and his family renting their home for $30 a month; his father Marcel worked as a butcher.4 After settling in Queens, Marcel and Marie gave birth to another son, Jack, in 1931.5 By the 1940 Census, seen in line 58, John and his family continued to live in Queens and Marcel continued his work as a butcher. By this time, both John and his father were naturalized as United States citizens.6

In the midst of World War II, Andres, at age seventeen, enlisted in the United States Navy.7 Though the US Armed Forces mandated the legal age of enlistment as eighteen years old, seventeen-year-olds with parental consent could also enlist.8 This shows Andres’s willingness and determination to serve his country. After his basic training, Andres received his assignment aboard the USS Beaverhead. The Beaverhead, named after a county in Montana, received her commission as a cargo ship on January 3, 1945 in the San Francisco Bay area.9 The ship’s muster roll shows Andres listed on the commissioning report on January 3 with the rank of Fireman Second Class (F2c) as they headed to the Pacific Theater of the war.10 As a fireman, Andres operated the boilers and pumps on the ship.11 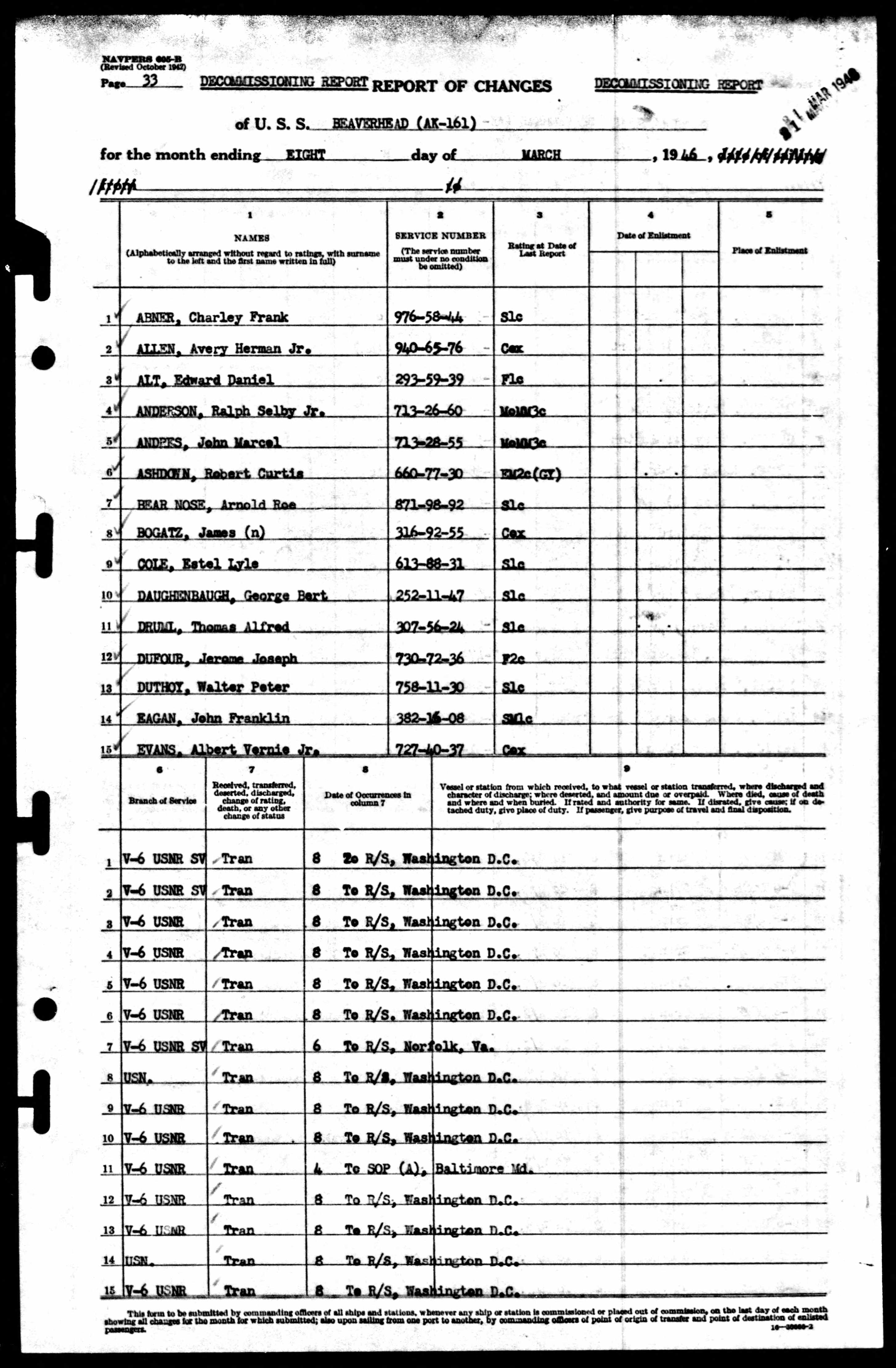 Andres and the Beaverhead left San Francisco, California on February 20, 1945, for service in New Guinea, the Admiralty Islands, and the Philippines with a crew of eighty-five sailors. The Beaverhead’s dimensions of 388 feet in length and fifty feet in width also included one three-inch dual-purpose gun mount and six twenty-millimeter guns.12 The Beaverhead supplied numerous American bases in the Pacific over the next eight months until December 5, three months after the Allied victory over Japan ended the war on V-J Day, September 2. The Beaverhead sailed back to the United States through the Panama Canal to New York City and then Norfolk, Virginia.13 On March 8, 1946, the Navy decommissioned the Beaverhead and Andres is listed on the ship’s decommissioning report, seen here, with the rank of Motor Machinist’s Mate Third Class (MOMM3).14 As a Motor Machinist’s Mate, Andres operated and maintained interior combustion engines and machine tools on board the Beaverhead.15 The Beaverhead’s crew received the American Campaign Medal, Asiatic-Pacific Campaign Medal, and the World War II Victory Medal.16

After the war ended and the Navy discharged Andres, he returned to New York. Andres settled down, marrying the former Joan Marguerite Keast, and the family expanded to include their son Jack and two daughters, Yvonne and Susette. His wife Joan worked as a bookkeeper for the R & J Transmission Company in Franklin, New York. Andres obtained a job as an electrical engineer, where he specialized in computers for the Burroughs Corporation.17 Formed in the early 1880s as the American Arithmometer Company by William Burroughs, the company specialized in adding machines (mechanical calculators). Later, the company changed their name to Burroughs Adding Company and served as a precursor to early modern computing technology. After the company rebranded to form the Burroughs Corporation in 1953, the company built multipurpose computer systems. By 1986, the company merged with Sperry Corporation to form Unisys, the second largest information systems company in the world.18

During their time in New York, the couple took an active role in their community where they joined the Heritage Lake Community Association and participated in area bowling leagues. In 1988, the Andres family moved from Elmont, New York, to Florida, settling in the city of New Port Richey in Pasco County. The couple participated in various clubs and organizations in the area such as the Loyal Order of Moose Lodge 1429 in Holiday, Florida. In addition, their Catholic faith remained an important aspect of their lives.19 In 1993, Andres’s wife Joan passed away at the age of sixty-four.20 On May 12, 1996, Andres passed away at the Harborside Healthcare Gulf Coast Center at the age of sixty-nine. His father Marcel survived him, as well as his brother Jack, his three children, and three grandchildren. At the time of his death, he maintained a close relationship with his companion Helen G. Clarke.21 Florida National Cemetery in Bushnell, Florida placed a memorial headstone in honor of Andres and his service to his country on June 5, 1996.22 As an immigrant from France, Andres came to America to achieve greater opportunities. His enlistment in the Navy and his work as an electrical engineer demonstrate a life of service to his country, including his involvement in early computing technology.