On March 6, 1915, John and Anna Seidel gave birth to their only son, Edward John Seidel, in Buffalo, New York. The 1915 New York State Census shows Edward as a newborn baby with his father John working as a machinist, most likely for the Delaware, Lackawanna & Western Railroad Company, while his mother was a housewife.1 The Delaware, Lackawanna & Western Railroad formed from a series of mergers, consolidations, and leases, eventually serving the New York City and Buffalo line by 1882.2 By 1920, Edward and his parents moved to Groveland, New York where his father continued as a railroad machinist for the railroad company.3

By 1930, Edward’s parents divorced, and Edward and his father John moved in with John’s mother Carrie. The 1930 Census lists Edward, fifteen and still in school, living at his grandmother's home in Buffalo. John continued working as a machinist.4 Completing high school by 1935, Seidel moved to Virginia to work for the US government in the Department of Agriculture.5 During the 1930s, the agency assisted rural farmers and communities hurt by poverty and lower crop prices under President Franklin Roosevelt’s New Deal programs.6 On March 5, 1938, Seidel married Mildred Lunsford in Forestville, Maryland; by the 1940 Census, Seidel and his wife settled in Falls Church, Virginia, near Washington, DC, where the couple worked for the US government. Edward worked as a clerk within the Department of Agriculture while Mildred worked as an elevator conductor.7 In the past, elevators were operated by people who trained to perform the task; passengers did not just push a button to move from floor to floor.8 The couple soon welcomed a son Lance by 1941 and a daughter Mary Ann by 1943.9

Service: Seidel in the Army 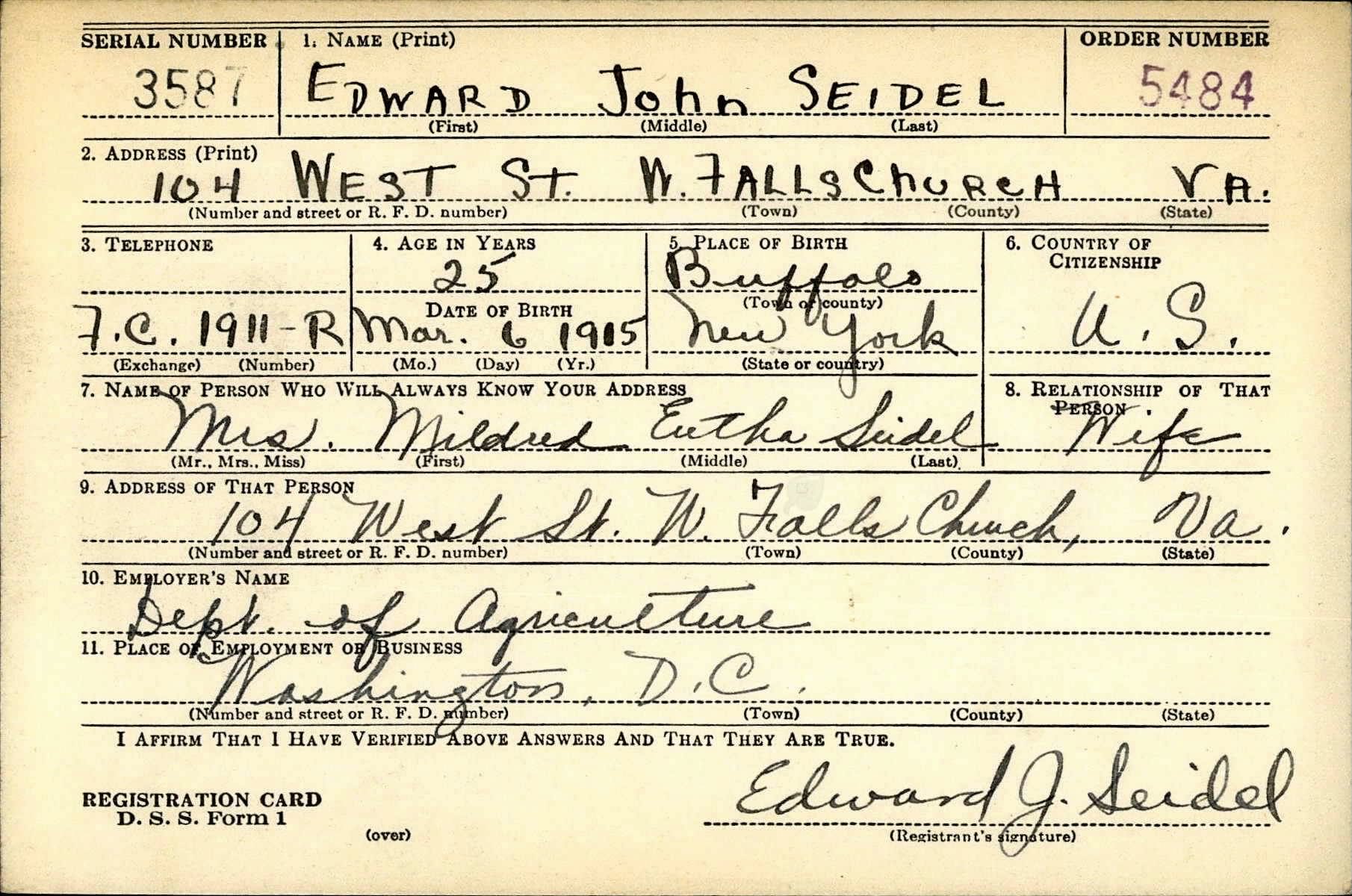 On July 1, 1940, Congress passed the Selective Training and Service Act, establishing the first peacetime draft in US history and requiring all males between the ages of twenty-one and thirty-six to register for the draft. The act took effect on October 16, 1940, and over sixteen million men, including Seidel, registered. The law also ensured that no more than 900,000 men trained at any one time.10 In 1940, Seidel, age twenty-five, registered, listing his employment at the Department of Agriculture.11 After the United States entered World War II in December of 1941, single men between the ages of twenty-one and thirty-five became many of the first draftees. However, after July 1, 1943, eighteen year olds, as well as fathers, soon received draft notices. Twenty-seven was the average age of those drafted during World War II.12 Seidel, the father of two young children, initially did not receive a draft notice; however, on March 9, 1945, he enlisted in the military in Richmond, Virginia. He eventually served in the US Army, holding the rank of private.13

At the time of his enlistment in March of 1945, the Allied Forces inched closer to victory in the war in Europe with the German surrender coming two months later on May 7, 1945.14 Now focused solely on Japan, the United States sent more troops to the Pacific to prepare for the invasion of Japan. The atomic bombings of Japan, as well as the Soviet Union’s declaration of war, prompted the Japanese surrender on September 2, 1945.15 While it is not known if Seidel served at home or overseas, he served as a soldier in the Army, ready to defend his country. On May 1, 1946, the Army discharged Seidel.16 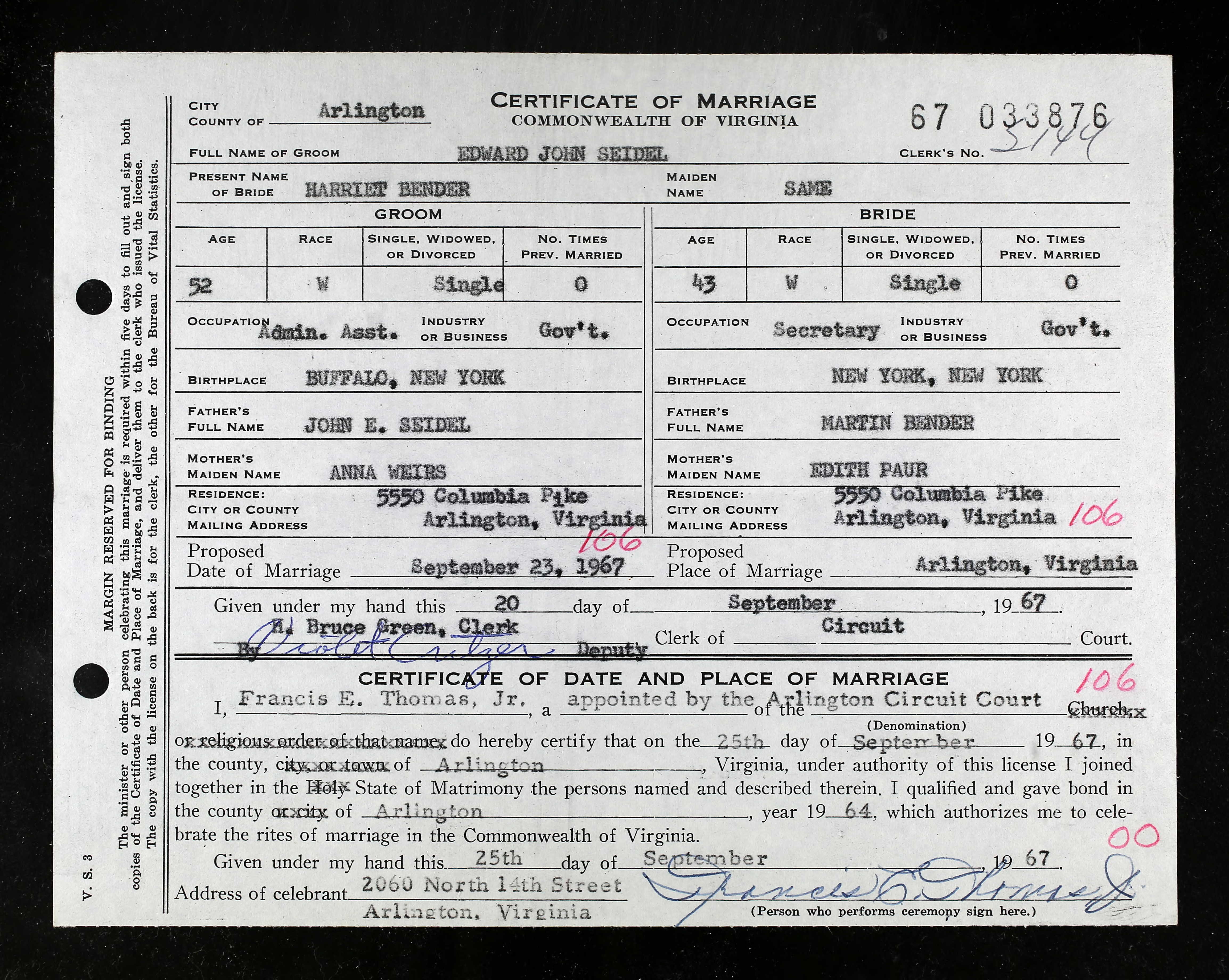 After his discharge, Seidel returned to Virginia and continued working for the federal government. The family also continued to grow as Seidel and his wife Mildred welcomed two more sons, Walter in 1949 and Daniel in 1951—part of a national trend of babies born in the postwar era. The family continued to reside in Falls Church. Ultimately, after two years of separation, Edward and his wife divorced on September 25, 1967.17 Edward then married Harriet Bender in Arlington, Virginia.18 At the time, both worked for the government: Edward as an administrative assistant, and Harriet as a secretary.19 The family later settled in Delaware during the 1970s and 1980s before moving to Florida by 1992. They lived in Haines City and later in Vero Beach by 1995.20 On September 1, 1996, Seidel passed away at the age of eighty-one.21 Officials at Florida National Cemetery in Bushnell, Florida, placed a memorial headstone in honor of Seidel and his service.22 Through his work for the federal government as well as his tenure in the Army, Seidel reflects a life of service to his country as a soldier and a government worker.