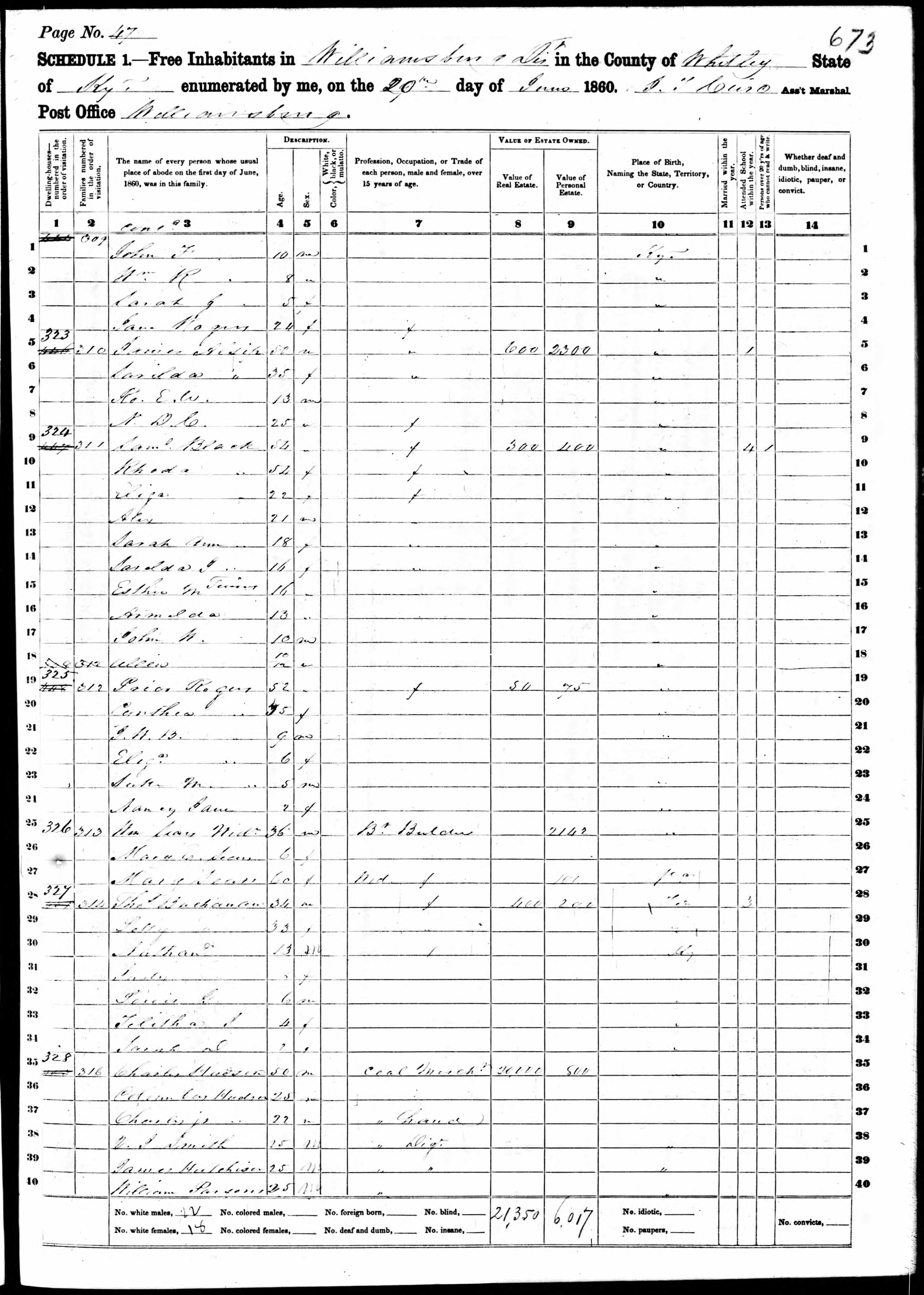 Born on January 21, 1823, Thomas Buchanan grew up in Williamson County, Tennessee. While his parents are unknown, the size of Buchanan's family and his rank in the Army during the American Civil War suggest he was the son of a large grower or other economically influential family. Buchanan eventually made his way to neighboring Kentucky where he met his future wife, Letty Greene, who he wed on November 5, 1846. They eventually had six children, as noted in the 1860 Census: Nathan in 1847, Juda in 1851, Lewis in 1853, Telitha in 1855, Sarah in 1858, and Henry in 1860.1 Buchanan made a life for himself in Kentucky before finally joining the ranks of the Union Army during the Kentucky Secession Crisis of 1861.

Following the turbulent election of 1860, Unionists and Secessionists vied for control of the Kentucky government, a relationship that only intensified when President Lincoln requested that Kentucky muster 75,000 troops to quell the rebellion in the South.2 Many of Kentucky’s legislators sympathized with the Union cause, but Governor Beriah Magoffin failed to back this request when he claimed he would provide no troops against his sister southern states. Despite this refusal, Kentucky did not join the second wave of secession and instead became a hotbed of contention regarding secession.3 Various militia groups, loyal to each side, came into existence to protect those interests. Thomas Buchanan very likely served in a pro-union militia, or home guard. In 1861, Kentucky held a special congressional election that resulted in nine of ten congressional seats occupied by Unionists, effectively ending the secession craze in the state. These Unionist congressmen declared a state of neutrality for Kentucky, but the Confederacy soon violated this neutrality after Kentucky began mobilizing Union forces across the state.4

The violation of neutrality mustered the 7th Kentucky Volunteer Infantry Regiment, bringing Thomas Buchanan along with it. Upon assembly, Buchanan held the rank of 1st Sergeant, eventually rising to the rank of 1st Lieutenant by his death in 1863. On August 12, 1861, Buchanan wrote home to his parents in Tennessee, expressing his concern for the coming battle against secessionists in Whitley County. News came to his unit of an attack by the secessionists planned for the next morning. In this letter, Buchanan pleads that he “wants to be remembered by his brother and sisters” and that if he survives, he wants his mother and father to come visit him for Independence Day the following year.5 Buchanan asks for his friends and family not to grieve for him, as he “loves his country and is determined to defend it.”6 Fortunately for Buchanan, he would go on to survive this attack and many more engagements.

Falling under the command of Ulysses S. Grant for much of their service, the 7th Kentucky Infantry Regiment played an active role in the western theatre of the Civil War. The regiment took part in numerous battles and skirmishes including the Cumberland Gap Campaign, the battles of Chickasaw Bayou, Arkansas Post, Port Gibson, Champion Hill, Big Black River Bridge, and finally the siege of Vicksburg in 1863.7 Many of these battles occurred on the outskirts of Vicksburg, Mississippi.

Following these smaller skirmishes, Lt. General John Pemberton’s army retreated and fortified the city of Vicksburg, Mississippi. Between May and July 1863, Major General Ulysses S. Grant laid siege to the vital city, entrapping the Confederate forces.8 The conditions in the city worsened over the next several weeks. Residents began to starve, resorting to non-traditional food sources such as horses and rats.9 Without food and facing constant bombardment of the city by Union forces, Vicksburg surrendered on July 4, 1863 after prolonged siege operations.10 This was the culmination of one of the most brilliant military campaigns of the war. The loss of both Pemberton’s army and a vital stronghold on the Mississippi effectively split the Confederacy in half.

At Vicksburg, the 7th Kentucky Infantry fell under the command of Colonel James Keigwin, a commander under McClernand’s XIII Corps. On May 22, 1863, with attempts by Grant and Sherman to break Confederate lines unsuccessful, the XIII Corps put pressure on the southern half of Pemberton’s lines to provide the two generals with an opportunity to regroup and prepare for another assault. Buchanan likely fought alongside Keigwin’s forces, taking part in some of the most dangerous skirmishes during the Siege of Vicksburg.11 On June 13th, 1863, Thomas Buchanan passed away from wounds sustained in battle, likely during the assault on May 22.12 In its entirety, the 7th Kentucky Infantry lost 319 men to battle and disease.13 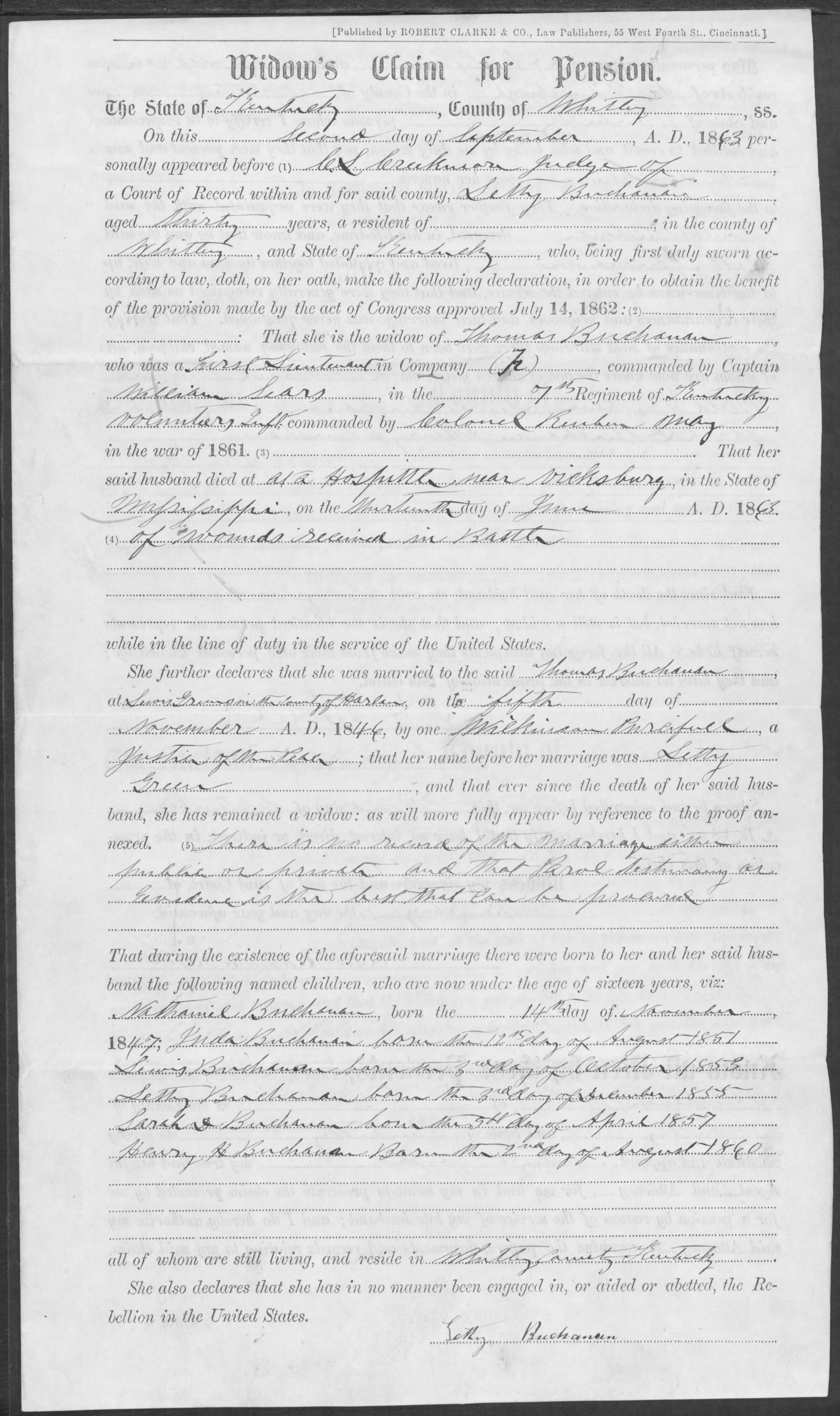 After her husband’s death, Letty Buchanan applied for compensation via a widow’s pension in 1863, visible to the left. This process requested that she detail the circumstances and facts of her marriage to Thomas Buchanan, the births of their children, and any other information proving she was his widow. Her husband’s pension awarded her seventeen dollars a month, with an added one dollar per dependent child. She continued to correspond with the Pension Office as her children grew of age, removing portions of the financial support as they moved on with their own lives. She stopped claiming the pension at eighty-nine in 1916 when she passed away in Whitley County, Kentucky. Her grandchild attempted to gain access to the next twenty years of unclaimed pension, a request that the Pension Office denied.14 There is no record of Buchanan’s interment, but he is memorialized at Florida National Cemetery in Bushnell, Florida, section MD, number 39.15