By Mike Burke and Brook Labounty

When Albert Lee Minyard Jr. was born in Georgia in 1917, his mother, Ola, was nineteen years old and his father, Albert Sr., was thirty-four. By his third birthday, Minyard and his parents lived in Brooks, Georgia, a town numbering 256 residents near Atlanta.1 Growing up in rural Georgia during the early twentieth century exposed Minyard to the effects of the Great Depression in the South, a place where the recession struck much harder. While unemployment did not hit Georgia as hard in the first few years of the crisis, by 1930, Atlanta reported that nearly fifty percent of their employable workers could not find jobs. This not only exacerbated economic tensions, but also social tensions from the long-standing racial struggle in the South as blacks became increasingly unemployed compared to whites.2

While Brooks, Georgia, may not have been as affected by this racial struggle, economic tensions may have been at an all time high. Minyard’s father worked and owned his own barber business at a local farm store in Brooks, but the recent devastation of the boll-weevil insect, much of the agrarian south had its staple crop, cotton, destroyed.3 This devastation may have exacerbated economic stress in Brooks, leading to Minyard trying to escape the situation in 1935 by enlisting in the US Army.4

Service Life: In and Out of the Army 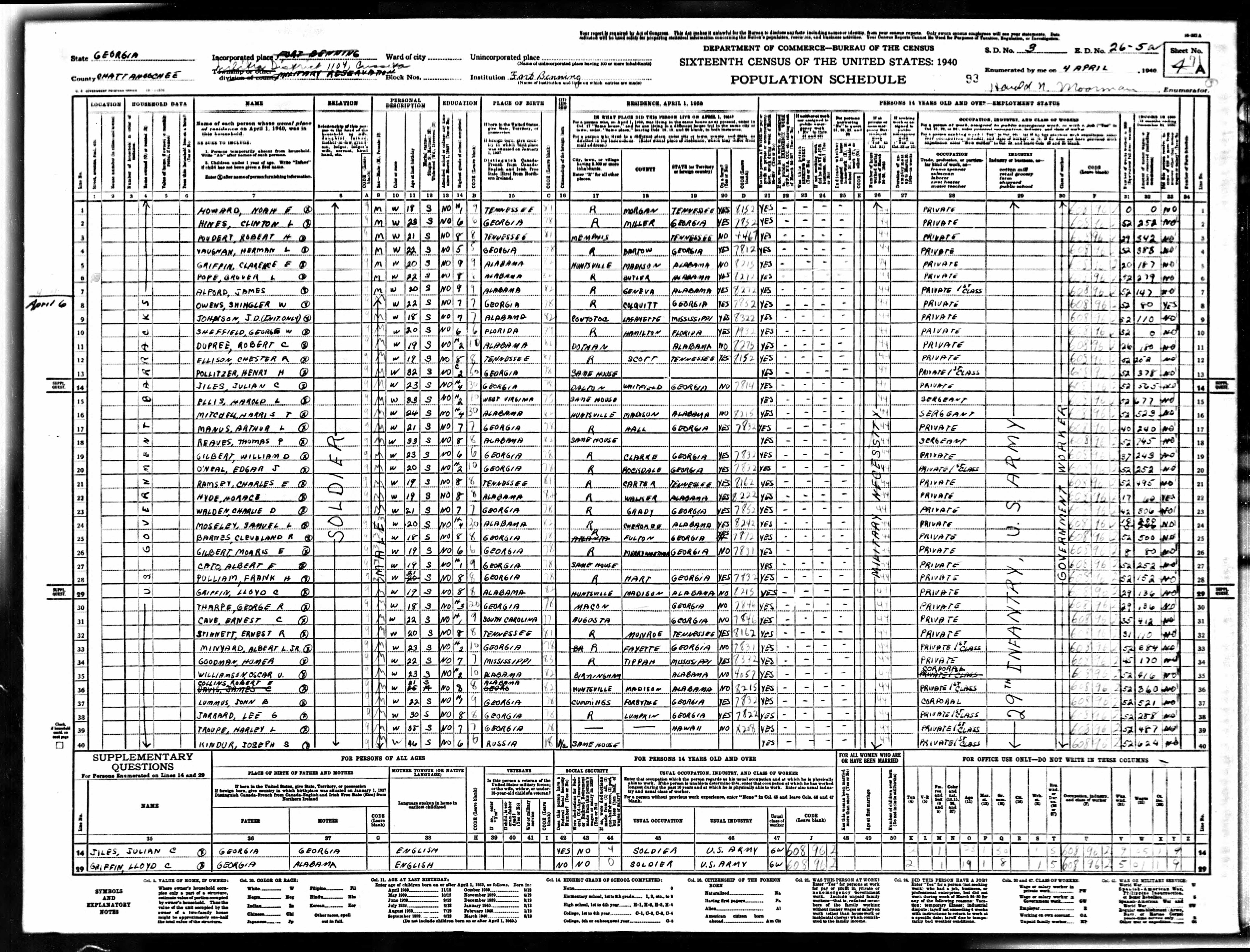 On May 2, 1935, Albert Minyard enlisted to the US Army after completing three years of high school in what was most likely an attempt to obtain stable and professional employment. Minyard was among the first classes trained at Fort Benning after the “Benning Revolution.” After World War I, George C. Marshall revamped the training procedures at Fort Benning as an attempt to improve on the military’s performance in World War I. Among his new procedures was a focus on tactics and mechanized warfare, a hallmark of the next great war—World War II.5 Minyard himself served in the 29th Infantry Regiment, Fort Benning’s Demonstration Regiment, where he helped train soldiers.6 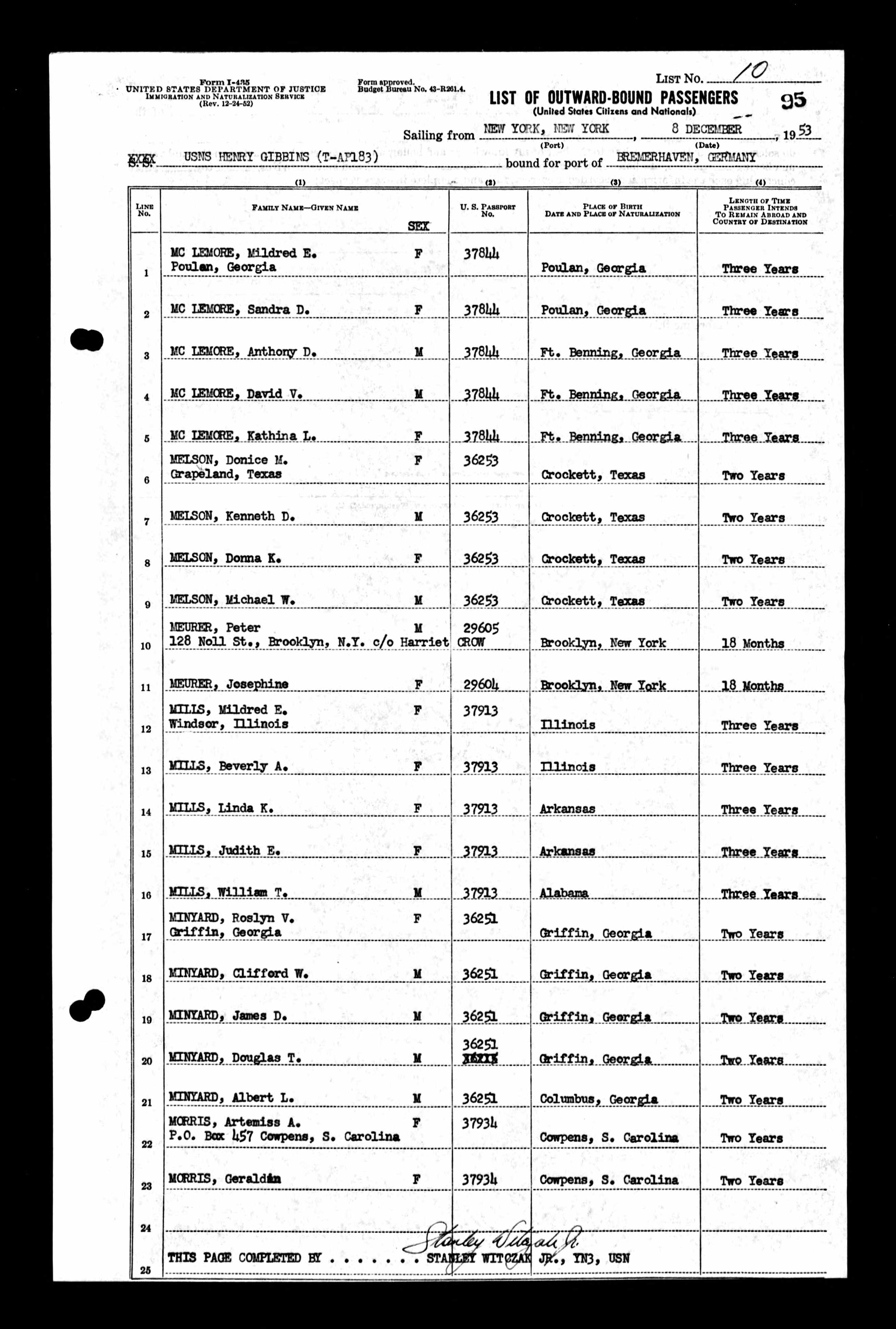 Minyard reenlisted in the Army on May 19, 1941, shortly after his previous enlistment ended on May 1, 1941. Like his previous enlistment, he enlisted at Fort Benning, Georgia.7 During his time in the service Minyard met his wife-to-be, Roslyn, likely in Columbus, Georgia, the home of Fort Benning; they eventually married on December 4, 1948.8 When they married, Minyard may have adopted Roslyn’s son from a previous marriage, Douglas, and they would go on to have one more boy, James Minyard, before the Korean War. The entire family joined Minyard when they traveled to Bremerhaven, Germany in 1953 aboard the USNS Henry Gibbins.9 The Henry Gibbins served under the Military Sea Transportation Service and made multiple voyages across the Atlantic to Germany and other friendly ports.10 Minyard likely spent his time on duty in Germany or other areas of Army influence. Information on Minyard’s service approaching 1958 is scarce, but he eventually returned home with his wife and children.

Master Sergeant Albert Lee Minyard Jr. left the US Army in 1958. Minyard and Roslyn eventually made their way to Florida, most likely settling down in St. Petersburg, Florida.11 Little information is known about their final years, but Albert Lee Minyard Jr. passed away on January 13, 1986 in Hillsborough County, Florida. He is memorialized in Florida National Cemetery in Bushnell, Florida, section MD, site 41.12 His wife, Roslyn, survived him, living in the Tampa and St. Petersburg area until her own death on May 2, 2000. She is memorialized with Albert in Bushnell.13