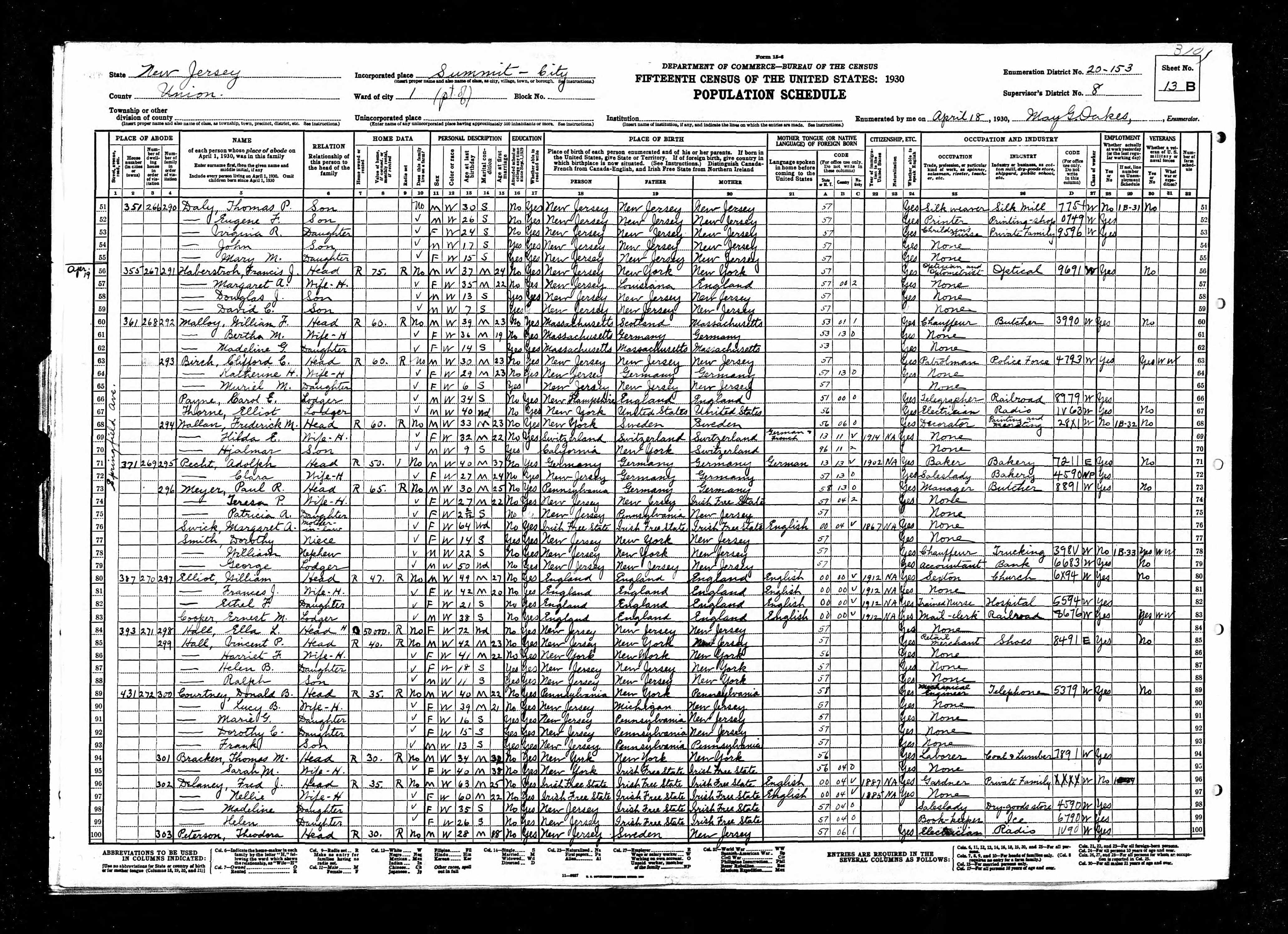 Born to Francis Joseph Haberstroh and Margaret Rickard Haberstroh in the small New Jersey town of Summit on February 9, 1923, David Carl Haberstroh was the second of two children, born six years after his brother Douglas.1 David Haberstroh had an extremely close relationship with his brother Douglas throughout his life. His parents, both born in New York in the early 1890s, married in Hudson, New Jersey, on October 14, 1915.2 His father registered for the draft in 1917, but did not serve in World War I. 3 As seen here in the 1930 Census, Haberstroh’s father, Joseph Haberstroh, worked as an optometrist, providing David with a stable childhood during the Great Depression, something that could not be said for many other children throughout the country. 4 Like many other areas of the country, New Jersey experienced high unemployment during the Depression years. 5 However, after his graduation from high school and a brief stint as an actor, Haberstroh enlisted in the military to serve his country during World War II.

On June 20, 1942 at the age of 19, David enlisted in the army, six months after America’s entrance into the Second World War. 6 Haberstroh served in the 82nd Airborne Division, a distinguished unit that participated in a number of European battles in during WWII. Overall, it participated in combat jumps over Sicily and Salerno Italy, Normandy, France, and Nijmegen, Netherlands.7 The fact that he achieved the rank of Sergeant by the end of the war suggests that his conduct during the war must have been good enough to earn several promotions through the ranks.8 Many soldiers in World War II enlisted or drafted for the duration of the war plus six months.9 Although this was not true for all who fought in the war, Hoberstroh's service did extend into the post-war period, ending on July 22, 1947.10

After his release from active duty in July of 1947, David moved back home to Summit, New Jersey, where by 1950 he had married Elizabeth, acquired a job as an embalmer, and began to expand his family.11 In the following several years, they had two children, Peter and Carolyn.12 Until the late 1950s, David and Elizabeth raised their children close to his brother Douglas’s family, which consisted of himself, his wife Betty, and their children. One of Douglas’s sons was named David in honor of his uncle. Both Peter and Elizabeth remarked later in life on the family’s close relationship with Douglas and his family.13 By 1957, David moved his family to the nearby city of Elizabeth, New Jersey, where he worked as a court attendant.14 This precipitated several moves across the country, including one to Annapolis, Maryland for just over a year.15 The exact circumstances of these moves are unknown.

After his children grew up and moved out of the house, his son Peter attended the University of James Madison in Virginia,16 Haberstroh and his wife moved back to New Jersey for a short period of time, during which his father Francis passed away in January of 1968 at the age of 77.17 By 1980, however, they moved to Venice, Florida, a coastal town south of Tampa. Soon after, they were joined by his brother Douglas, who moved to nearby Sarasota.18 Continuing his habit of being a jack-of-all-trades, David quickly became a Sheriff’s Deputy in the community.19 In addition to this employment, he was also a member of the South Venice Civic Association, the South Venice Yacht Club, Englewood Elks Lodge 2378, and Veterans of Foreign Wars. He was a member of Epiphany Cathedral in Venice. David Carl Haberstroh passed away on March 10, 1996 at the age of 73. He is memorialized in the Florida National Cemetery, plot number MD-05.20