Early Life: Moving Around the Country

On January 30, 1919, Arthur Sr. and Bertha Huisken gave birth to their firstborn son, Arthur Huisken Jr., in Baltimore, Maryland. Through his paternal grandparents, Huisken’s ancestral roots went back to Germany, although his grandparents bore Arthur Sr., his father, in California. His mother Bertha grew up in Iowa. The 1920 Census reveals nearly one-year old Huisken and his parents living in Annapolis, Maryland, where his father Arthur Sr. worked as a chemist.1 During the mid-1920s, the family moved to Illinois where his parents gave birth to another son George around 1926. By 1930, Huisken and his family settled in Racine City, Wisconsin, where Arthur Sr. worked as a salesman for an oil and gas company.2 The Great Depression greatly affected the state of Wisconsin, such as the Wisconsin Milk Strike of 1933 which devastated the state economy as well as dairy farmers dependent on the dairy industry.3 The collapse of the state economy may have prompted the Huisken family to relocate to La Grange Park, Illinois. 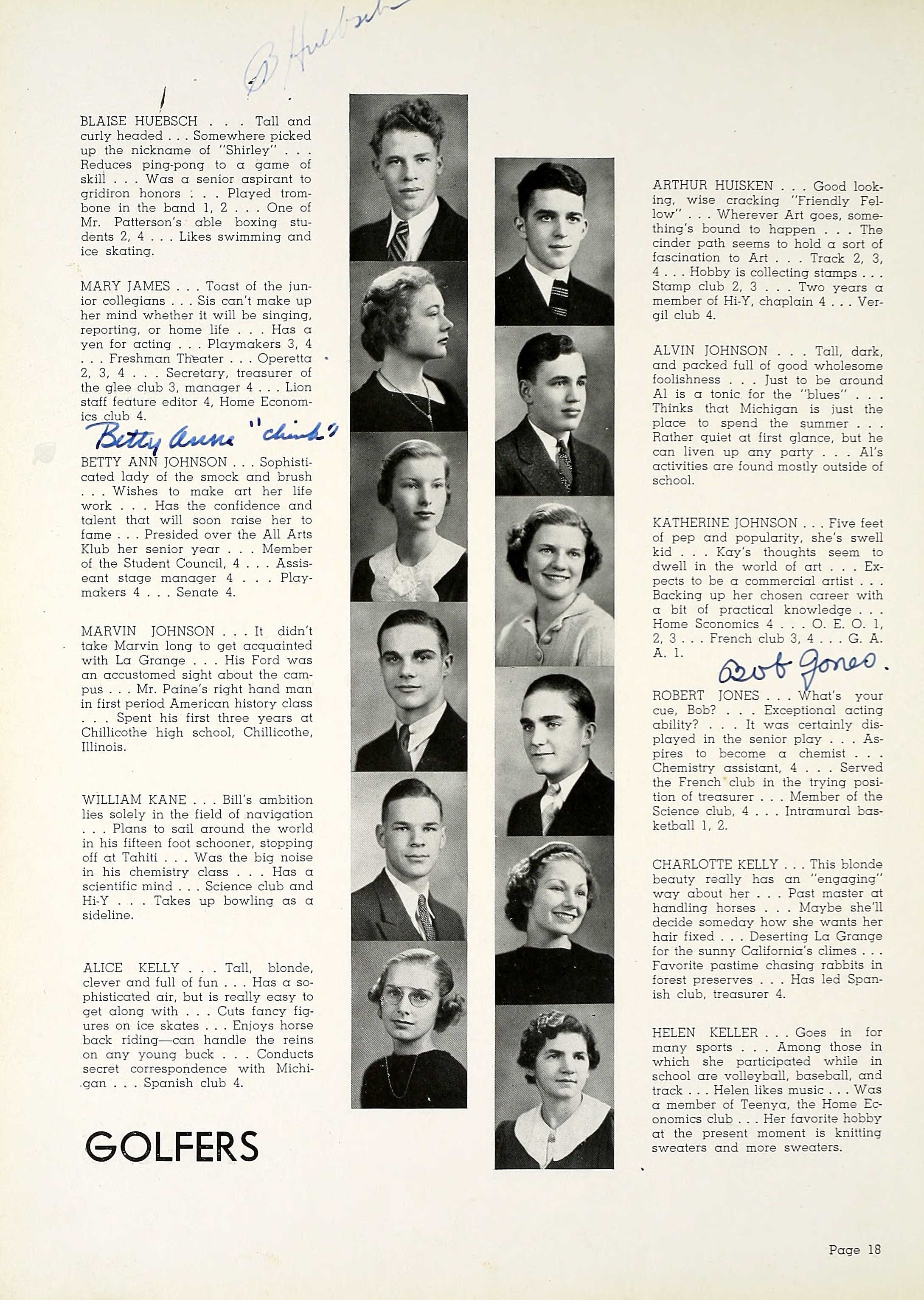 By 1937, Huisken attended Lyons Township High School in La Grange where he participated in various extracurricular activities including serving as a member and chaplain of the Hi-Y, a branch of the Young Men’s Christian Association (YMCA).4 A quote about Huisken in the school yearbook in 1937 (as seen here) stated: “Wherever Art goes, something’s bound to happen.”5 This quote proved to define his life moving forward.

In 1940, Huisken and his family continued to reside in La Grange. His father, Arthur Sr., continued working as a sales representative for an oil and petroleum company. In addition, Huisken helped support his family as a laborer in soap manufacturing while attending Purdue University in neighboring Indiana.6 By 1942, Huisken graduated from Purdue with a Bachelors of Science degree in Chemistry, during which time he joined and participated in various organizations such as the American Institute of Chemical Engineers (A.I.Ch.E.), the Cary Club, the Catalyst Club, and the Phi Lambda Upsilon and Tau Beta Pi Honor societies. He also received an award as a Distinguished Student.7

Service: Huisken in the Navy Reserve

While still in school, Huisken enlisted in the United States Navy Reserves on June 15, 1941. Immediately following his graduation from college, Huisken received the rank of Ensign, the entry level rank for commissioned officers in the Navy on May 20, 1942. On May 1, 1943, the Navy promoted him to the rank of Lieutenant Junior Grade.8 He eventually served on board the USS Steamer Bay (CVE-87) where the June 2, 1944 Muster Roll lists him among other non-enlisted passengers onboard.9 The Steamer Bay, after its construction in Vancouver, Washington and its sea trials, traveled to San Diego in preparation for service in the Pacific Theater of the war on May 14, 1944. The Steamer Bay served as an escort carrier assisting in various operations in the Palau Islands, the Philippines, and Japan before sailing back to the West Coast of the United States in August of 1945.10 After the Steamer Bay returned to the US and following the Japanese surrender, Huisken served on board the USS Bunker Hill (CV17), a full-sized fleet carrier, en route from Seattle to Alameda, California. Both the Steamer Bay and the Bunker Hill transported veterans returning from overseas.11 Huisken and the other three million Navy reservists that served during the war, comprised eighty-four percent of the total force of the Navy.12 Huisken remained in the Navy Reserve until his discharge on April 22, 1946.13 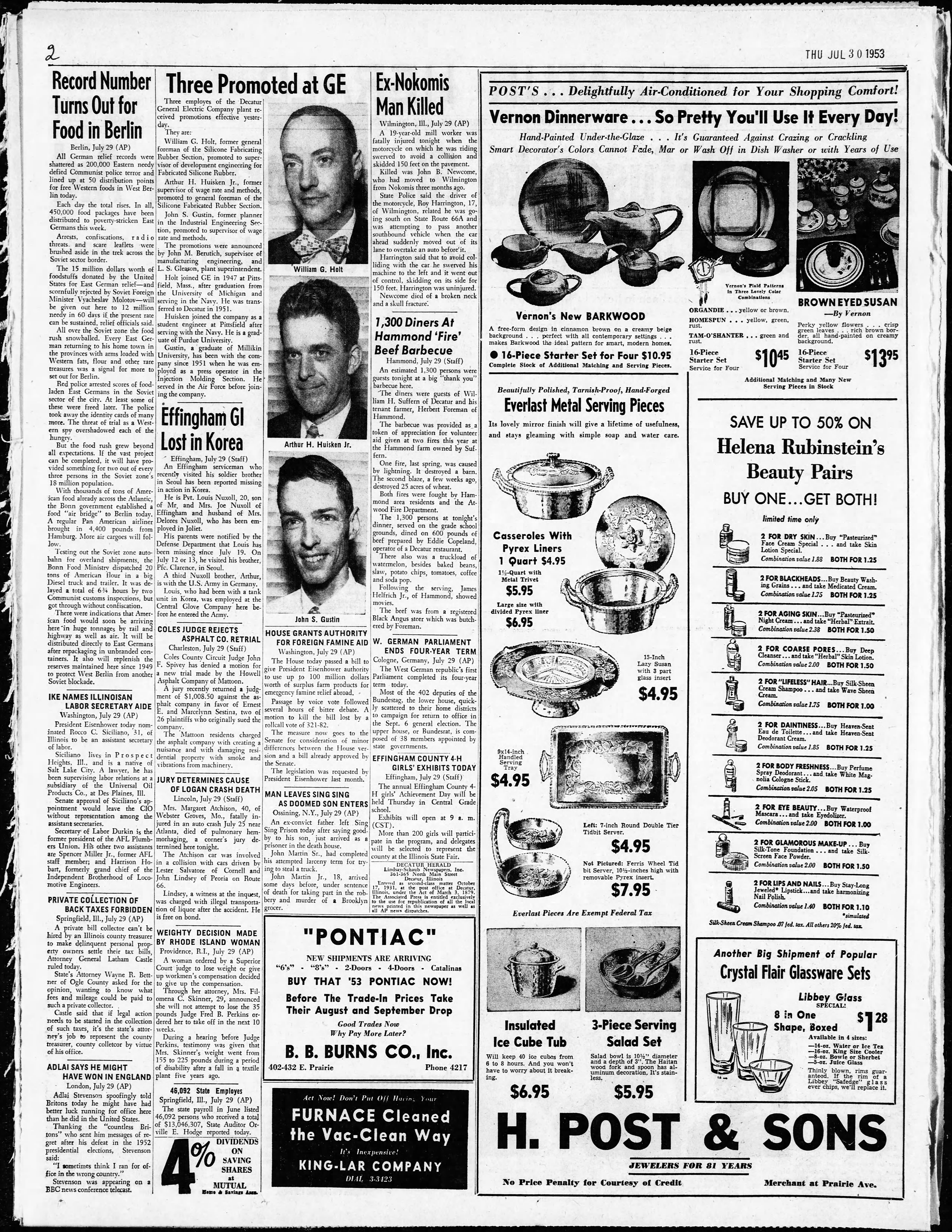 Shortly after his discharge from the Navy, Huisken returned stateside and began his career working for General Electric. Founded in 1892, the company soon established itself as the leading American firm in the electrical industry, eventually diversifying into a multipurpose engineering company involving nuclear power, computers, and plastics after World War II.14 Huisken used his degree in chemical engineering to secure training as a student engineer for General Electric’s Plastics Division in Pittsfield, Massachusetts before receiving his assignment to the methods and equipment laboratory.15 In Pittsfield, he met Janet Gray, a native of the town who also worked for the Plastics Division as a stenographer. After asking for her hand in marriage, the couple married on October 26, 1946 at Zion Lutheran Church in Pittsfield.16 The couple eventually bore two children, a daughter Deborah and a son David.17 Huisken progressed through General Electric, first working as a supervisor of production mold manufacturing in the Plastic Division at the Pittsfield plant by 1950.18 In 1951, Huisken transitioned to the General Electric plant in Decatur, Illinois, first serving as a supervisor of wage rate and methods before his promotion (as seen here) as a general foreman of the Silicone Fabricated Rubber Section in 1953.19 During his time in Decatur, he also served as the secretary for the local American Business Club (ABC).20

Yet, by 1956, the family transitioned again to Taunton, Massachusetts, where Huisken served as the supervisor of production and shipping for the General Electric plant in Taunton before serving as a manager of the General Electric plant in Lynn, Massachusetts by 1963.21 He continued to work for General Electric until his retirement, eventually moving to Central Florida in 1990 where he and his wife settled in Leesburg. On July 3, 1996, Huisken passed away at the age of seventy-seven, leaving behind his wife and two children.22 The Florida National Cemetery in Bushnell, Florida placed a memorial headstone in honor of Huisken and later for his wife Janet who passed away in 2008. 23 From serving in the Navy Reserves to working in an important position for General Electric, Huisken’s service to his country, his company, and his family remains his legacy.