On November 22, 1920, Ernest Joseph Lafave and his wife Wanda gave birth to a son, Bryce Aloysious Lafave in Bay City, Michigan.1 Less than two years later, the family welcomed a daughter Joanne, commonly referred to as Norma. While his mother Wanda’s family roots extended back to Iowa and Ohio, his father was a French Canadian who emigrated from Toronto to Michigan via Detroit in 1915.2 During the late nineteenth and early twentieth centuries, the relative freedom along the United States/Canada border gave many prospective Canadian migrants knowledge of the economic conditions and opportunities south of the border, especially in manufacturing. Most Canadian migrants from the province of Ontario like Ernest went to the neighboring states of Michigan and New York where family or friends already resided.3 Ernest’s cousin Mrs. Frederick Terry lived in Detroit.4

Bryce Lafave spent most of his life in Michigan where his family lived in various cities throughout the state. For many years in the early 1920s, the family lived in Port Huron where Ernest worked at the Howard Furniture Company, and Wanda managed a Vanity Fair store.5 In 1929, the local Port Huron newspaper, The Times Herald, mentioned Bryce in the Personal Mention section (as seen here) concerning his recovery from a mastoid operation surgery two weeks earlier.6 However, by the 1930 Census, Lafave (line sixty-seven) and his family moved to the city of Flint where his father worked as a retail salesman at a local furniture store.7 By 1939, the family relocated again to the city of Dearborn, near Detroit, where Ernest worked as a salesman at the Montgomery Ward & Company.8 According to the 1940 Census, Lafave (line sixty-nine) and his family moved further west to the city of Jackson where Bryce, now nineteen, and his parents all worked in retail.9 In the Great Depression, families moved seeking to maintain steady employment during this economic crisis.

Lafave in the Army Air Corps

After graduating high school, Lafave gained employment as a local driver for Avery’s Trading Post in Jackson.10 On May 11, 1942, Lafave married Yvonne Coldsnow, yet two weeks later on May 26, Lafave enlisted in the Army Air Corps and received an assignment at Chanute Field in Champaign County, Illinois.11 Chanute Field served as a technical training center for the Army Air Corps.12 In February 1943, during his time at Chanute Field, his father Ernest suddenly passed away.13 Despite his loss, Lafave may have found some solace in his wartime service.

While World War I showed the potential of aerial warfare, World War II solidified aerial its importance. Lafave joined the Army Air Corps as the War Department gave this branch of the Army greater autonomy. The Army Air Forces organized and supported combat air units in both the European and Pacific Theaters of the war growing from 400,000 men at the beginning of 1942 to over 2.4 million by 1944.14 The branch served as the predecessor to the independent United States Air Force. While no available records exist regarding his service after Chanute Field, Lafave deserves appreciation for his role in the war whether in Europe, the Pacific, or the homefront. Lafave retained skills from the Air Corps service that later proved important in his life as a taxi driver and factory worker. After the war ended in September 1945, the Army discharged Lafave on December 12, 1945.15 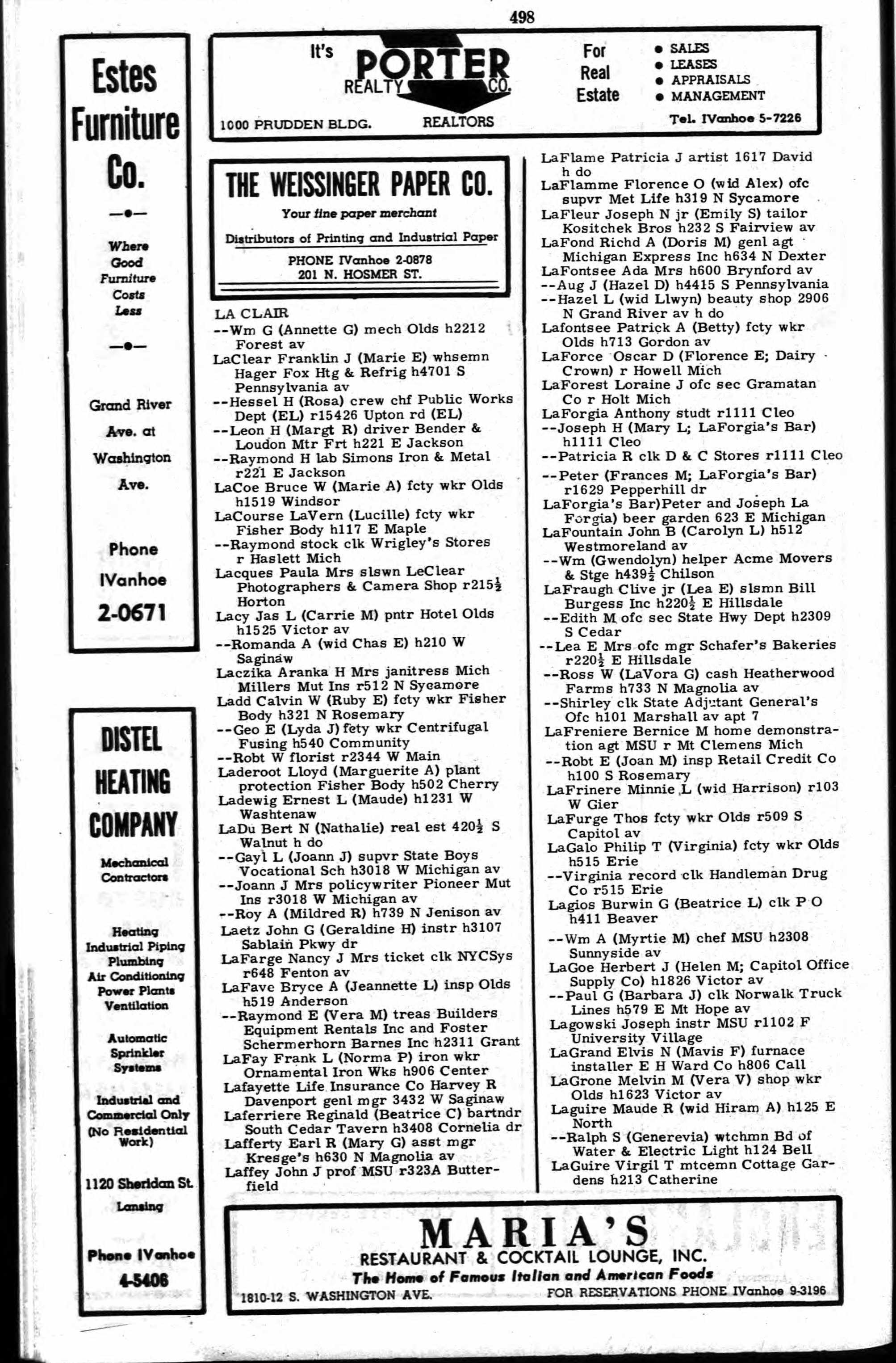 After the war, Lafave resumed his work as a driver in the city of Jackson.16 In the postwar baby boom, Lafave fathered three daughters. In addition, the family experienced tragedy upon the death of Lafave’s newborn daughter known as Baby Girl Lafave on September 3, 1951 in Jackson. 17 By 1951, Lafave and his wife Yvonne divorced. In 1955, Lafave married Jeannette Louise Smith and the couple relocated to Lansing, where the City Directory in Lansing lists his occupation as an inspector at the Oldsmobile factory (as seen here, seventh from the bottom in the first column).18 He continued in this occupation as a factory worker for many years.19 General Motors, one of the Big Three automobile companies continued to enjoy success in the mid-twentieth century, with thousands of jobs in the Midwest, particularly the founding state of Michigan. Oldsmobile, founded in 1897 by Ransom E. Olds in Lansing, saw the company expanded and ultimately was the fourth ranked automaker in the nation by 1958. By 1965, over 15,000 Oldsmobile workers lived in Lansing.20 Lafave worked at the peak of the Oldsmobile company before its decline and eventual dissolution by the early 2000s.

After spending most of his life in the state of Michigan, Lafave and his wife Jeannette moved to Florida in 1992, first to Orlando and then Kissimmee before settling in the Tampa Bay area in 1994.21 On January 22, 1996, Lafave passed away at the age of seventy-five at the Hospice of Hillsborough in Valrico, FL. He left behind his wife Jeannette, seven daughters, his sister Norma, twenty-eight grandchildren, and ten great-grandchildren.22 Lafave is memorialized at Florida National Cemetery in Bushnell, FL.23 His legacy reflects the value of hard work as well as devotion to his country.