By Terriana West and Gramond McPherson

On October 18, 1928, Amos L. and Bertha Bourcier gave birth to their son Charles Clement Bourcier in Ludlow, Massachusetts.1 Bourcier grew up in a large family. He was the fifth of eight children. His older brothers and sister were Lionel, Francis, Theresa, and Eugene. His younger brothers and sister were Bernard, Lawrence, and Bernadette.2 While his parents were from Massachusetts, Bourcier’s family contained French-Canadian ancestry through both of his paternal grandparents as well as his maternal grandmother. The 1930 Census shows Bourcier and his family living in Ludlow where his father Amos supported the family as a carpenter who worked from home. The family owned their home, valued at $4000.3

While the job of a carpenter already brought seasonal and cyclical joblessness, the Great Depression further complicated employment. During the Depression, many relied on stable employment through a state or federal agency, but fierce competitions for jobs arose. Those fortunate enough to obtain construction work from agencies knew "there were other fellows who were lined up along the fence on the sidewalks ready to take over their jobs the minute they got fired”.4 However, Bourcier and his family made it through. By 1940, his father moved from working for himself to working as a carpenter at a local building construction company. His older brothers, Lionel and Francis, also supported the family as laborers while eleven-year old Charles attended school.5

Service: Bourcier in the Navy

Bourcier joined the United States Navy on January 8, 1946.6 Though Bourcier was only seventeen years old, the US Armed Forces allowed seventeen-year olds with parental consent to enlist before the legal age of eighteen.7 This shows Bourcier’s willingness and determination to serve his country. While the Japanese surrendered in September of 1945, the United States did not declare World War II’s ending against Germany and Japan until President Harry Truman signed Presidential Proclamation 2714 into law on December 31, 1946, officially ending all hostilities. Thus, all military personnel who served between Pearl Harbor and the proclamation are World War II veterans.8 In the Navy, Bourcier helped to sustain this newly found peace. As an Aviation Machinist’s Mate 3rd Class, his role involved inspecting and maintaining aircraft engines and their related systems including induction, cooling, fuel, oil, compression, combustion, turbine compressors, exhaust, and propellers.9 On November 7, 1948, the Navy honorably discharged Bourcier.10 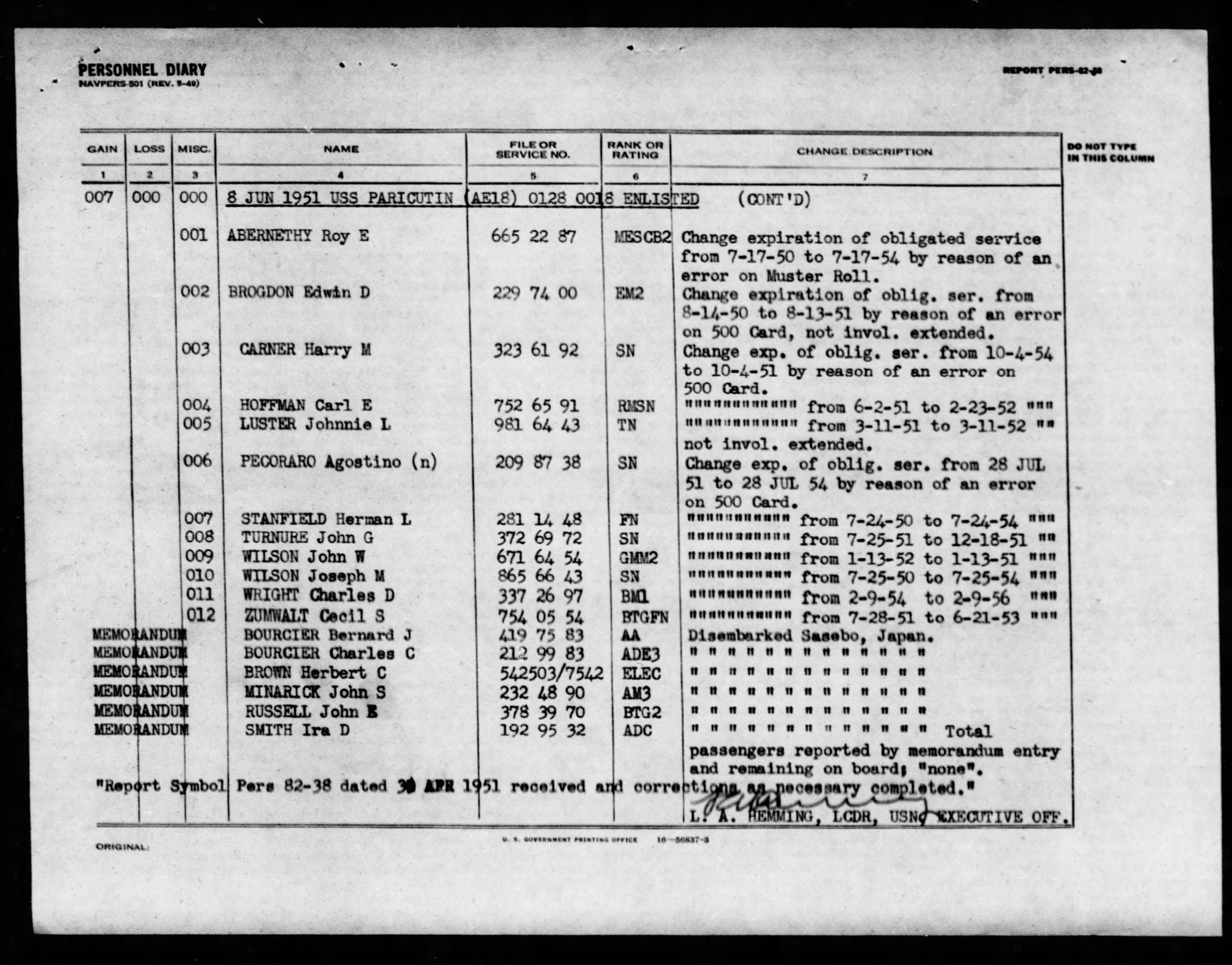 However, following North Korea's June 25 attack on South Korea in 1950 and the start of the Korean War, Bourcier re-entered the Navy on July 21, 1950.11 The United States led the efforts of the United Nations in supporting the South Koreans, providing over ninety percent of the troops for UN forces, military equipment, and supplies.12 Bourcier, during his second tenure in the Navy, served as an Aviation Machinist’s Mate (Engine Mechanic) 3rd Class. Navy Muster Rolls for July 1 and 8, 1951 list Bourcier as serving on the USS Princeton (CV37) and then on the USS Paricutin (as seen here).13 Both the Princeton and the Paricutin previously served in World War II and were recommissioned in response to hostilities in Korea. The Princeton, an aircraft carrier, supported operations off the Korean Peninsula beginning in December of 1950 by collaborating with other Navy, Marine and Air Force squadrons.14 After sailing to the East on October 8, 1950, Paricutin spent eighteen months servicing combat units before returning to the United States in March of 1952. Bourcier's service on Paricutin involved assisting the Service Squadron from a base at Sasebo, Japan.15 The Navy discharged Bourcier for the final time on August 4, 1951.16 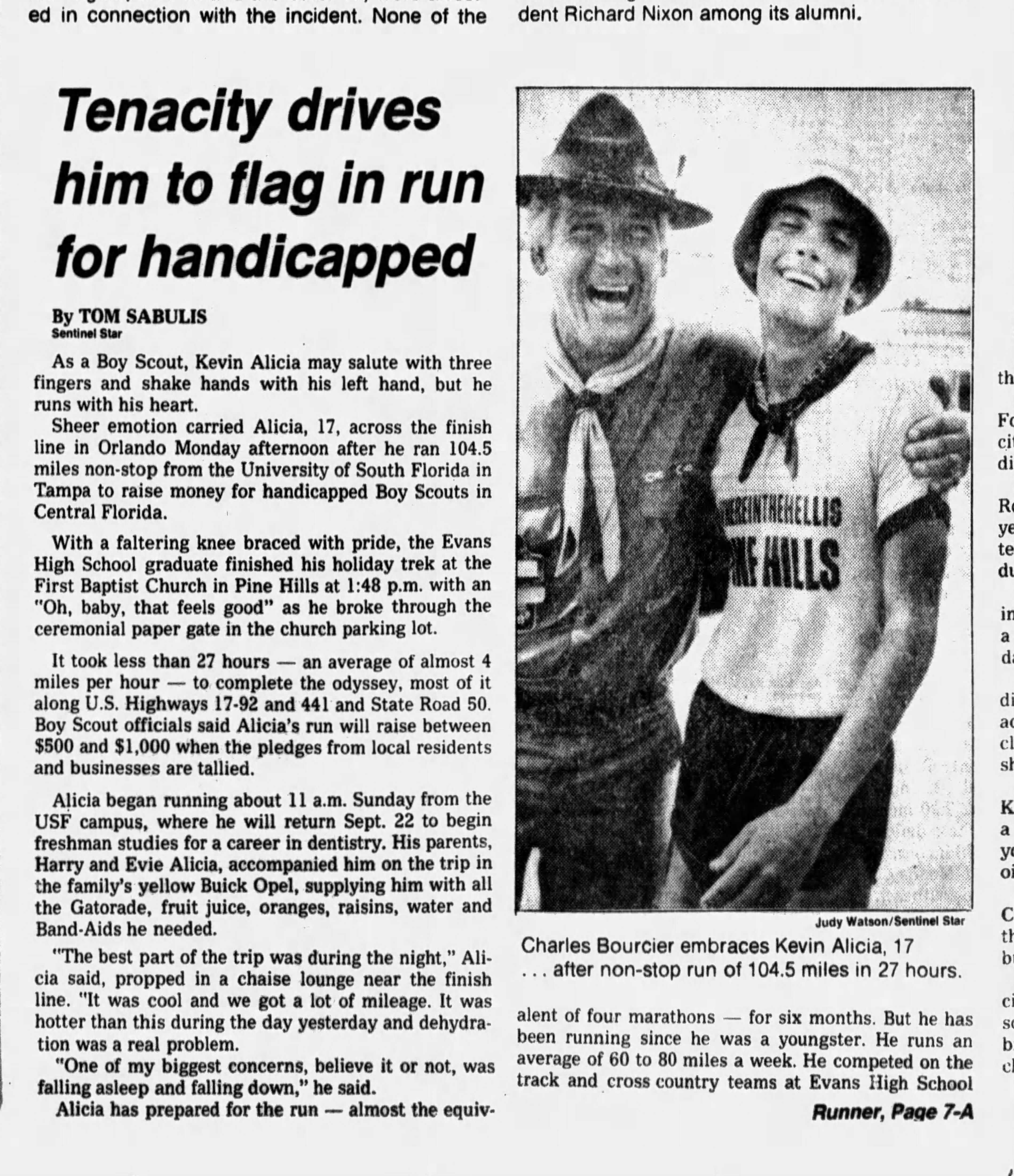 After his second discharge, Bourcier returned to Massachusetts where he married his wife Alcina and, by 1955, settled in Springfield, Massachusetts.17 However, in 1956, the family relocated to Central Florida where he made a living as a proprietor of a pool company.18 The 1950s to 1970s saw large declines in population in the Northeast and Midwest coinciding with large rises in populations for the Sunbelt region of the South and West, especially Florida.19 Later he worked for Sikorsky Aviation and traveled to Brazil and Alaska.20 During his time in Central Florida, he took an active interest in the Boy Scouts of America (as seen here), serving as a district chairman, a member of the Central Florida Boy Scout Council, and a mentor and confidant for local youth. His faith as a member of the Church of Jesus Christ of Latter-Day Saints also played an important role in his life.21

After his first marriage ended, Bourcier married Melanie Gay Conway on September 28, 1975 in Seminole County, Florida.22 He fathered nine children: his sons Daniel, Steven, Keith, and Anthony, and his daughters Denise, Charlene, Amy, Camille, and Chanin. On September 17, 1996, Bourcier passed away at the age of sixty-seven and left behind seventeen grandchildren and seven great-grandchildren. 23 Florida National Cemetery in Bushnell, Florida placed a memorial headstone in honor of Bourcier. From serving in the Navy to mentoring children in the Boy Scouts, Bourcier’s life reflects his service to his country and to his community.