By Hannah Walls and Matt Patsis

The fourth of eleven children, and possibly living with three step-siblings, Rufus Jr. came from a large family. In addition to Thomas, John, and Peter, Rufus Jr. had other half-siblings named Erma (1898), Silvester (1901), Lottie (1903), Mollie (1905), Dallas (1906), and Dexter (1908).2 By 1900, Rufus Jr.’s older brother, Thomas, worked as a farm hand, presumably for his father, while Rufus, John, and Peter attended school.3 In 1910, Rufus Jr., then twenty-one, lived at his parents home in Polk County, Florida, where he worked as a laborer. While Rufus Jr. was literate, having received some schooling, he had been out of work for some time in 1910.4 Sometime between 1910 and 1917, Rufus Jr. moved to Melbourne, Florida. While it is unclear exactly when or why Rufus Jr. moved, he may have moved away from the family home after the death of his father in 1915. Or he may simply have been in search of new or better employment opportunities. Rufus lived in Melbourne until his enlistment in the Army.5 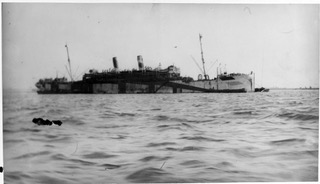 Rufus W. Ridgdill enlisted in the US Army at Fort Screven, Georgia, on June 5, 1917, when he was twenty eight. Rufus volunteered to serve in the Army before President Wilson implemented the draft on May 18, 1917.6 Private Rufus was assigned to the 6th Engineers, a unit within the 3rd Infantry Division.7 Rufus set sail for France aboard the SS Huron, pictured here, on December 5, 1917, arriving in France with the rest of the 6th Engineers on December 20, 1917,8 probably in the port city of Brest on the English Channel. The first members of the 3rd Division to arrive in France, the 6th Engineers were detached and assigned to serve alongside the British Expeditionary Forces.9 Given their early arrival in Europe, Rufus and the 6th Engineers played an important role in many major US operations in 1918, including the Somme Defensive, the all-American St. Mihiel Offensive, and the Meuse-Argonne Offensive, the final Allied push that ended the war.10 As a member of an Engineer unit, Rufus’ primary duties included the construction of trenches, bridges, fortifications, and the laying of barbed wire, while also spending some time as a reserve infantryman.11

On March 30, 1918, in a village near the city of Amiens, Rufus distinguished himself in battle during the Somme Defensive. As the Allies tried to hold back Germany’s Spring Offensive, which aimed to capture Paris and end the war before US troops could arrive en masse, Rufus volunteered to carry ammunition and ran to aid soldiers surrounded by German machine gun fire. According to his fellow soldiers, Rufus saw a comrade fall to enemy fire and followed “with no sign of hesitation, and without regard for his personal safety.”12 Rufus earned a promotion to Private First Class on September 1, 1918,13 likely as a result of this early display of bravery and willingness to fulfill his duty at the Somme.

After leaving Amiens, the 6th Engineers deployed to the Château-Thierry Sector, where they built defensive structures and fortified the Marne River from June to mid-July, 1918, in preparation for a German assault. When the German assault on the Marne River began in the early morning of July 15, the 6th Engineers scattered as the German Army attacked with gas and artillery.14 Encamped near Fontaine-aux-Charmes, German gas and artillery immediately targeted the members of Company D at the outset of the attack. Some members of Company D were fortunate, as much of the company was away from camp when the shelling began, yet the engineers that remained suffered a casualty rate of nearly forty percent. Tasked with digging trenches, laying wire entanglements, digging machine gun nests, and serving as reserve infantry, Rufus and the 6th Engineers of Company D played an important role in the defense of the Marne River, where the Third Infantry Division earned their nickname the “Rock of the Marne.”15

Reduced to partial strength after losses sustained during the Second Battle of the Marne at Château-Thierry, the Third Infantry Division was given time to rest and replenish their numbers on August 12, 1918. This was the 6th Engineers first break since March. Rufus and the 6th Engineers remained behind the front lines from August 12 until early September, when they began preparations for the Meuse-Argonne Offensive. During this time, the 6th Engineers trained, built bridges, and repaired war torn roads in the St. Mihiel area, operating in a support role behind the main conflict, never completely out of danger.16

Beginning September 26, 1918 and ending November 11, 1918, the Meuse-Argonne Offensive was the most critical contribution to the Allied cause in the war, and remains the largest and bloodiest battle in US history.17 Roughly 1.2 million American soldiers participated in this battle, ending with 26,277 Americans dead and 95,786 wounded, most of which occurred during a three week span.18 With over 4 million artillery shells fired during the forty-seven day battle, and facing constant gas attacks, the 6th Engineers faced harrowing circumstances as they worked, often having to survive in muddy artillery craters for days without food or water. Like so many other units, the Meuse-Argonne took a heavy toll on the 6th Engineers, with at least forty-five dead, and hundreds of men gassed or otherwise wounded during the battle.19

In Company D, Rufus earned yet another promotion during the Meuse-Argonne, when he made Corporal on October 18, 1918.20 Unfortunately, just two days later, on October 20, 1918, Rufus was caught in an artillery barrage while on patrol. According to his fellow soldiers, Rufus refused to abandon his post, where he had been assigned to observe enemy movements, and did not take shelter as shelling approached. As a result, he died at his post.21 It seems that Rufus again put his duties as a soldier ahead of his personal safety, further revealing the deep sense of commitment that he clearly possessed.

The First World War took a particularly devastating toll on the Ridgdill family. On October 7, 1918, Silvester Ridgdill, Rufus’ younger brother and a member of the 118th Infantry, was killed in action, just two weeks prior to his brother Rufus’ death. John J. Ridgdill was notified of his brother Rufus’ death, while Rufus’ stepmother Mattie, was informed of her son Silvester’s death.22 The magnitude of these tragedies must have surely devastated the Ridgdill family. 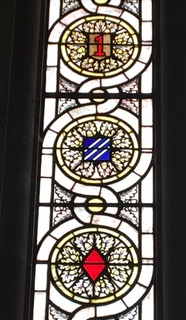 The 3rd Infantry Division is now known by their nickname, “Rock of the Marne” which they earned at the Marne River near Château-Thierry in July 1918. While other units retreated, Major General Joseph Dickman, commander of the 3rd Infantry Division, told French Allies “Nous Resterons La” (We shall remain here).23 Rufus Ridgdill and the 6th Engineers fought and built critical bridges during this battle, for which they were later awarded the French Croix de Guerre.24 This moment proved decisive in the 3rd Division’s legacy, a legacy that Rufus Ridgdill helped to create. For their service in World War I, Rufus and his comrades in the 3rd Infantry Division are memorialized in Washington D.C., Château-Thierry, and in the Meuse-Argonne American Cemetery, where they are among 14,246 Americans who died and are buried in Romagne-Sous-Montfaucon, France.25 Pictured here is part of a stained glass window in the cemetery’s chapel depicting the blue and white striped 3rd Infantry Division insignia.

In the years and decades that followed the First World War, histories emerged for many American units and divisions that fought and served in the conflict. Rufus earned a particular distinction in the historical record, as he is mentioned by name four times in the official history of the 6th Engineers; an uncommon honor that reminds us his comrades intended to commemorate and memorialize his service and sacrifice. Posthumously recommended for a divisional citation on July 19, 1919, Rufus was clearly a distinguished member of the 6th Engineers that stood out for his bravery and commitment to duty.26 Rufus’ memory lives through the lasting impression he made on his fellow soldiers, who made sure his actions were recorded in the official history written collectively by the men of the 6th Engineers in 1920.27 Rufus W. Ridgdill now lays in rest at the Meuse-Argonne American Cemetery, France, Plot F, Row 36, Grave 21.28

8 “WWI Service Cards,” Floridamemory.com entry for Rufus Ridgdill; History of the Sixth Engineers (New York: The Knickerbocker Press, 1920), 15; The History of the Sixth Engineers does not clearly identify authorship, only claiming to be written by “Its Men”; “US, Army Transport Service, Passenger Lists, 1910-1939,” database, Ancestry.com, (https://ancestry.com/ accessed July 10, 2018) entry for Rufus W. Ridgdill.

9 Coode, Stephen L., "The American Expeditionary Forces in World War I: The Rock of the Marne," (2008), Electronic Theses and Dissertations. Paper 1908. http://dc.etsu.edu/etd/1908; History of the Sixth Engineers, vi.

10 History of the Sixth Engineers, vi.

24History of the Sixth Engineers, viii.

27 History of the Sixth Engineers.