William H. Walden served in the Spanish-American War in the Tenth US Cavalry as a blacksmith. He served for six years until he died in Lakeland, Florida, where his unit trained for deployment overseas. 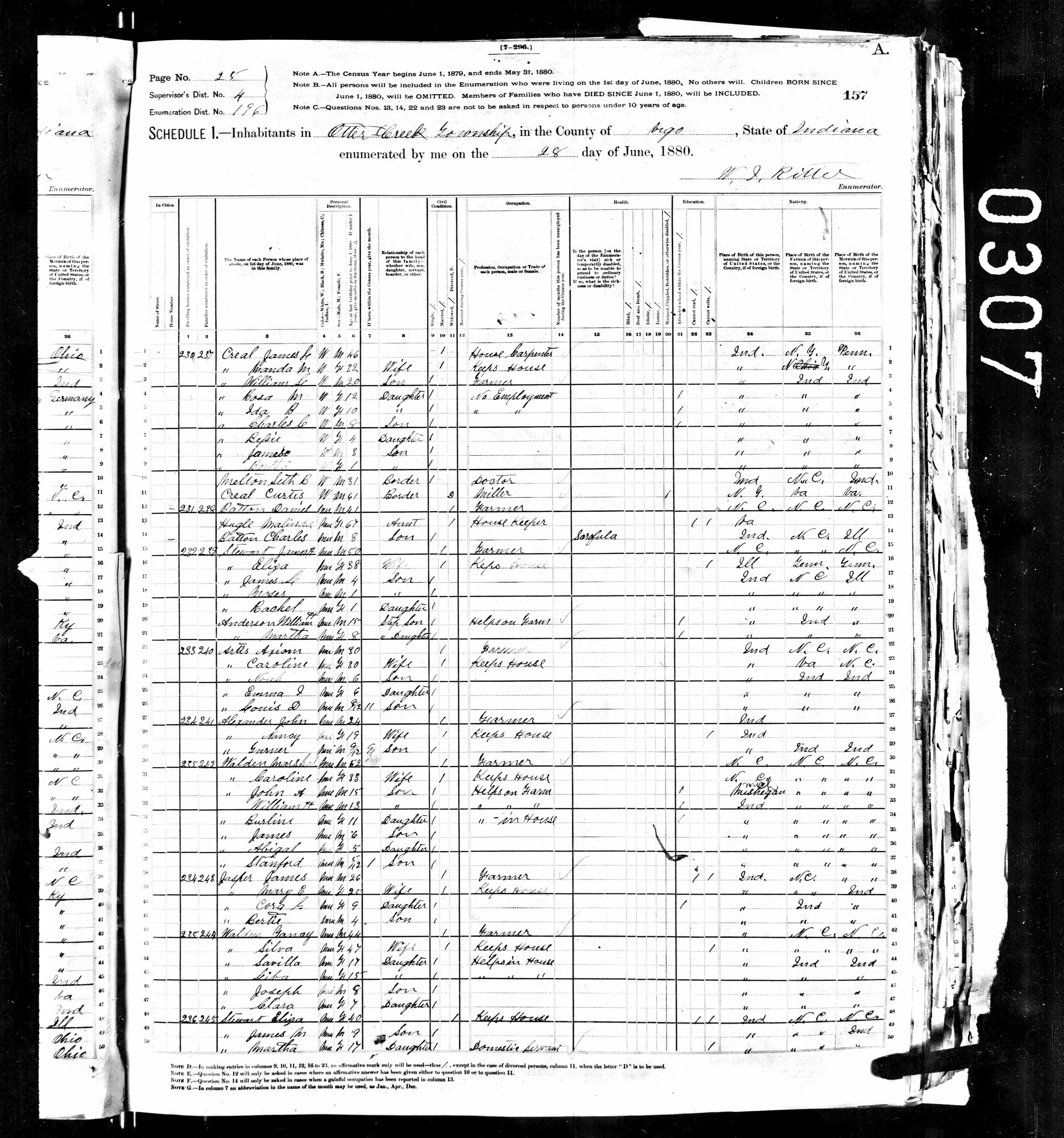 Walden was born around 1866 in Vigo County, Indiana. His parents Marshall and Caroline had six children including William, the second oldest. His siblings were named John, Burlins, James, Abigail, and Stanford. By the 1880 Census, Walden, now thirteen (line 33) helped his father in working on the farm, as seen here.1 Walden would later relocate to Richmond, Indiana where he married Mary E. Cook on November 11, 1884.2

On November 1, 1892, Walden enlisted in the US Army in Terre Haute, Indiana at the age of twenty six. He served in the Company K Tenth US Cavalry, a segregated black Army regiment. The Tenth served as one of the original ‘Buffalo Soldiers’ regiments a name applied to all men of the Ninth and Tenth U.S. Cavalry and the Twenty-fourth and Twenty-fifth Infantry. In serving in the American West in campaigns against Native Americans, there are two theories on how these men received this name. First, Native Americans associated black troops’ dark and curly hair with the fur of a buffalo. Another explanation suggests that Native Americans noted how these black troops fought valiantly and fiercely like the revered buffalo.3

The Army honorably discharged Walden on January 31, 1896 but he later reenlisted on September 16, 1896 in Fort Leavenworth, Kansas. Serving with the rank of blacksmith, Walden’s position proved important as cavalry horses required new shoes for the cavalry to function effectively.4 As war between the US and Spain broke out in 1898, Walden and the Tenth Cavalry travelled to Lakeland, Florida, which provided easy access to Cuba, the site of the ground campaign. The unit received extensive training to ensure the troops readiness for battle.5

While in Florida, Walden and his fellow black troops experienced the impacts of segregation and Jim Crow laws that dominated race relations, especially in the South. During their time in Florida, on June 6, 1898, a riot ensued between white and black soldiers over the treatment of a black child. After receiving word of a white Ohio regiment using a two-year old as target practice, black soldiers retalitated as violence broke out, lasting the entire day.6 Despite this discrimination, the Ninth and Tenth Cavalry fought honorably during the war, as various companies sailed to Cuba, including charging San Juan and Kettle Hill in Cuba with future US president Theodore Roosevelt. While he and his white unit, the First US Volunteer Cavalry—Rough Riders—received the majority of the credit, black soldiers in the Ninth and Tenth Cavalry shared the same dangers. The bravery of the Buffalo Soldiers made victory possible.7 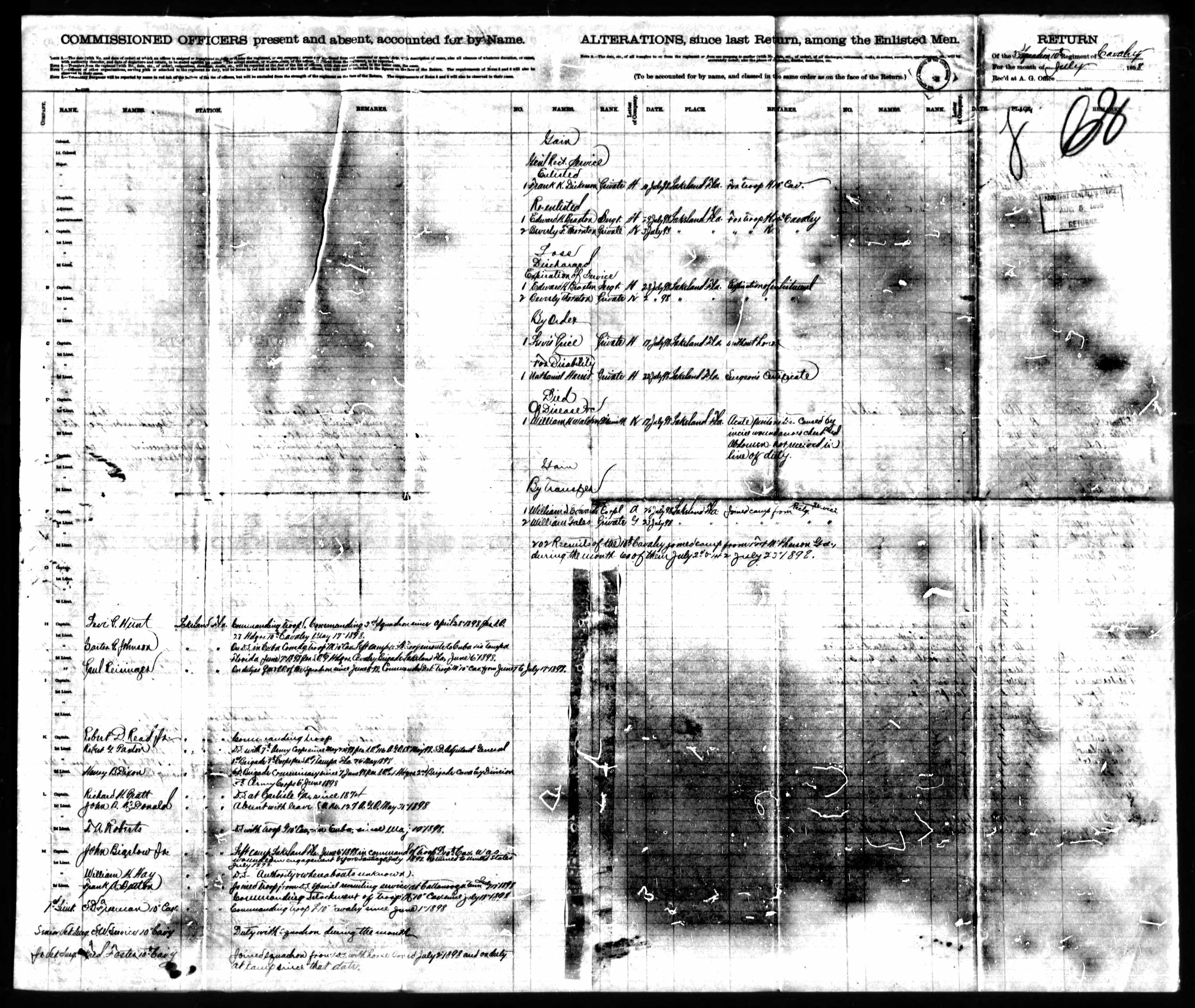 Walden and Company K, along with Companies H and L, remained in Florida to tend to the horses and military supplies left behind. On July 17, 1898, Walden died from the results of acute peritonitis caused by an incision wound across the chest and abdomen, as seen here, suggesting some sort of injury with a sharp object. The record noted his wounds did not occur in the line of duty. Peritonitis results from the inflammation of the peritoneum usually caused by a bacterial or fungal injection. A letter from John E. Lewis, a soldier in the Tenth cavalry, complained that some of the men fell ill from swimming. The document suggests the poor conditions in Lakeland’s environment likely resulted in Walden’s injuries proving fatal.8

On March 29, 1901, the government received an application for a minor's pension based on his service. Anna Hiatts was listed with the abbreviation “Gdn,” implying she served as the guardian for Walden’s minor children or dependent mother, father or sister. Guardians typically involved a soldier’s remarried widow, their close relative or a responsible community member looking out for the interest of the soldier’s dependents.9 Originally buried in a cemetery in Lakeland, he now rests in the Saint Augustine National Cemetery in Saint Augustine, Florida, in Section A, Grave Number 130.10