Elijah L. Landrum, known commonly as Eddie,was born in Sandersville, Georgia, on July 3, 1899, to Edmund and Argie Landrum. Before joining the Army, Landrum lived in Sandersville, working as a farmer, a common occupation of African American men in the rural South. The vast majority of black Southern men worked as tenants, sharecroppers, or wage farm hands. While many hoped to one day own their own land, debt to landlords and store creditors only increased their indebtedness to white Americans and few achieved land ownership.1

After the US entered World War I in 1917, Congress passed the Selective Service Act to increase the manpower of the military through conscription. The first draft registration took place on June 5, 1917, requiring all men in the US between the ages of twenty-one and thirty-one to register. The second registration took place a year later on June 5, 1918, for individuals who turned twenty-one after June 1917.2 Landrum, only seventeen and eighteen in 1917 and 1918 respectively, registered for the draft, listing his birth year as 1895 to make himself eligible to register. African Americans carried multiple motivations in registering for military service. For some, soldiers often earned more in the military—usually thirty dollars per month—than working as laborers or farmers, a significant financial benefit to many black families. Other African Americans hoped that by serving in the military and showing their bravery and loyalty to America, they would be rewarded with equal rights and fair treatment by white society. Thus, thousands of blacks registered, even willing to lie about their age, like Landrum, to join the war effort.3 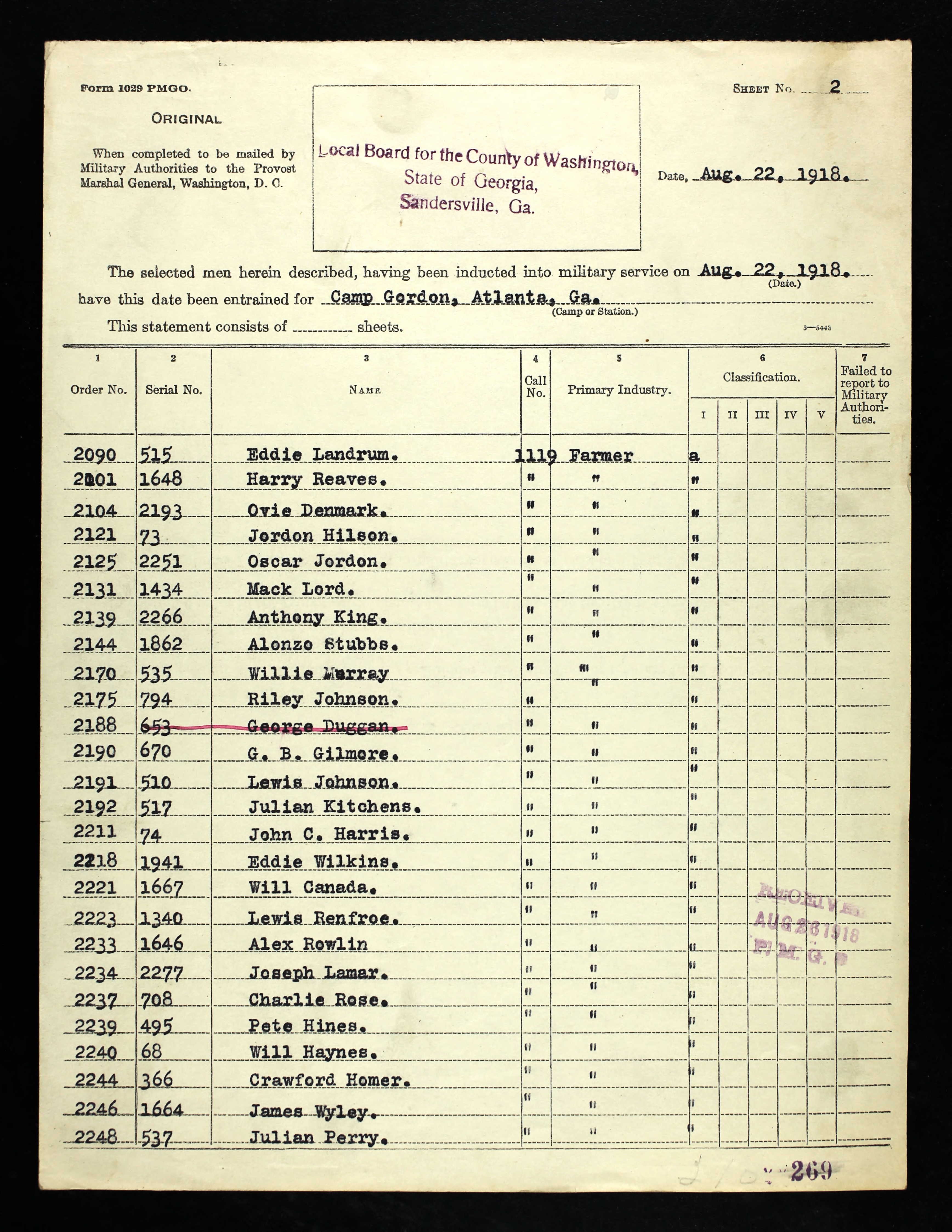 Overall, the military drafted one-third of black registrants compared to one-fourth of white registrants. On August 22, 1918, Landrum was drafted into the Army as a Private and went to train at Camp Gordon, Georgia near Atlanta, as shown here, as part of 157th Depot Brigade. The brigade originally formed in September of 1917, before moving to Camp McClellan in Alabama by September of 1918. The 157th returned to Camp Gordon in December of 1918. Depot brigades held soldiers during the initial period of processing, training and indoctrination into the Army before being assigned to an operational unit. The War Department, feeling pressure from whites, especially Southerners who feared race riots, sought to utilize black soldiers in non-threatening roles to meet both military and domestic needs. Thus, most black soldiers were assigned to Quartermaster and Engineering units which provided labor support. However, before Landrum could be assigned to an operational unit, the war ended with the armistice on November 11, 1918. Landrum remained with the 157th at Camp McClellan and Camp Gordon until his discharge from the Army on February 21, 1919.4 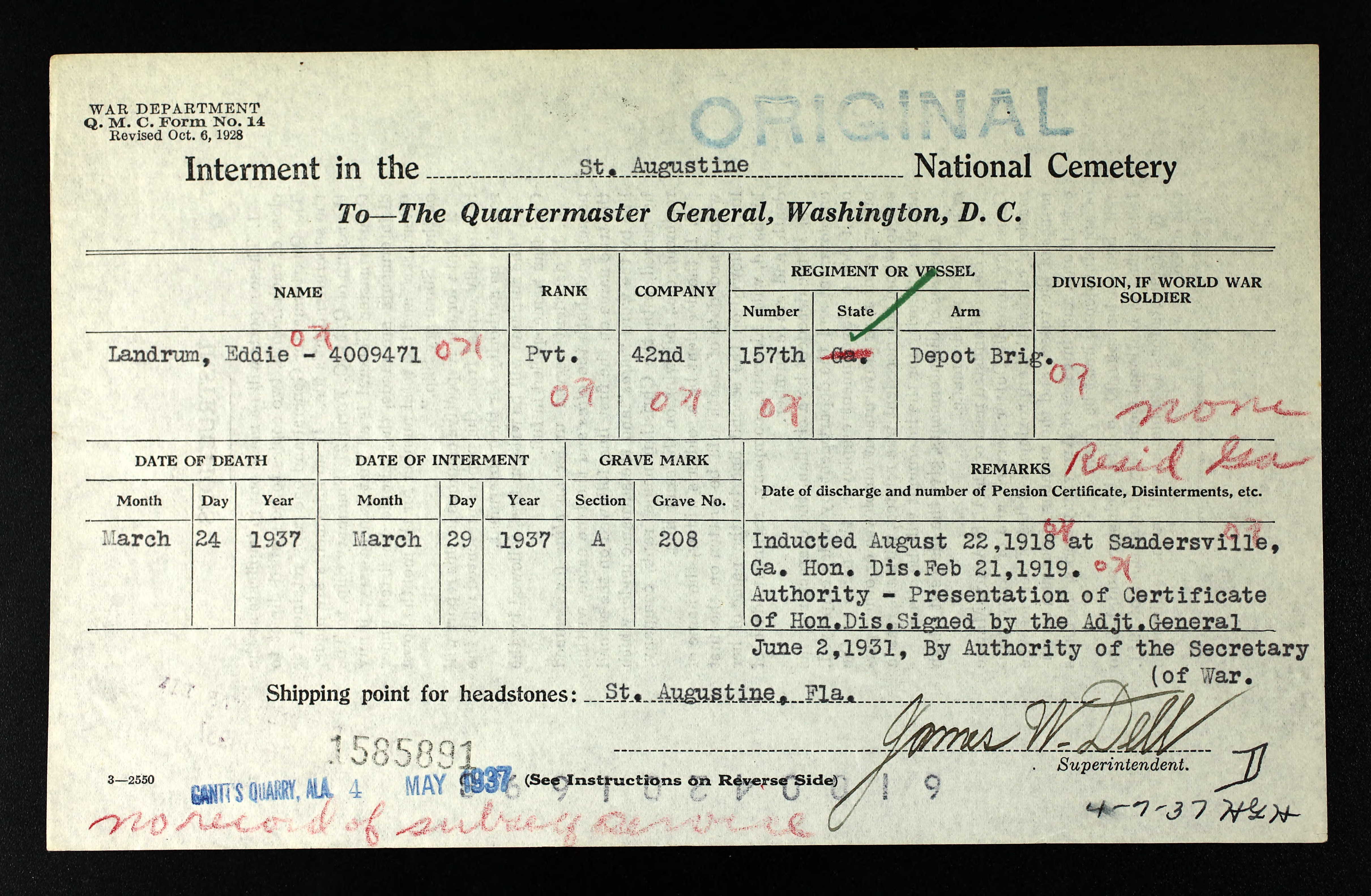 Landrum was married to his wife Ethel and the couple eventually settled in Saint Augustine, Florida, where Landrum continued working as a farmer. At the time of his death on March 24, 1937 in Saint Augustine, he farmed on the land of a Mr. Lawson. Landrum was interred on March 29, 1937 at the St. Augustine National Cemetery in Section A, Grave Number 208, as shown here.5