Jason Waitman was born on February 27, 1895 in Columbia County, Florida. In 1900, Jason was the ninth child of eleven siblings—six boys and five girls. It is likely that his father, J.M. Waitman, remarried Ellen Waitman in 1899 and that the last child, a girl born on November 1899, was from this new union.

While the four eldest siblings did not receive more than one or two years of schooling, they all knew to read and write, which was uncommon for an African American household in 1900 since only forty-four percent of black American could read and write in that era. 1 J.M. Waitman, who was born in Florida in 1861, likely still in slavery. He might have regarded basic education for his children, raised under the South’s Jim Crow laws, as a tool for better opportunities in life. He had certainly raised his social status; by 1900 he owned his farm, providing for his large family, helped by Jason’s five oldest siblings who were farm laborers working in the family business.2 In 1910, Jason was fifteen, he had attended school, knew to write and read English and worked on his father’s farm. 3

On April 6, 1917, United States declared war against Germany and officially entered World War I, but the army was not prepared with only about 350,000 active and reserve troops. To increase the size of the Army, Congress passed the Selective Service Act, on May 18, 1917, requiring all men between the twenty-one and thirty-one to register for the draft. On June 5, 1917, ten million Americans registered for the draft, Jason Waitman being one of them. He registered in St. Johns County where he lived and worked; he no longer worked on the farm. He drove for the St Augustine Ice Company. 4 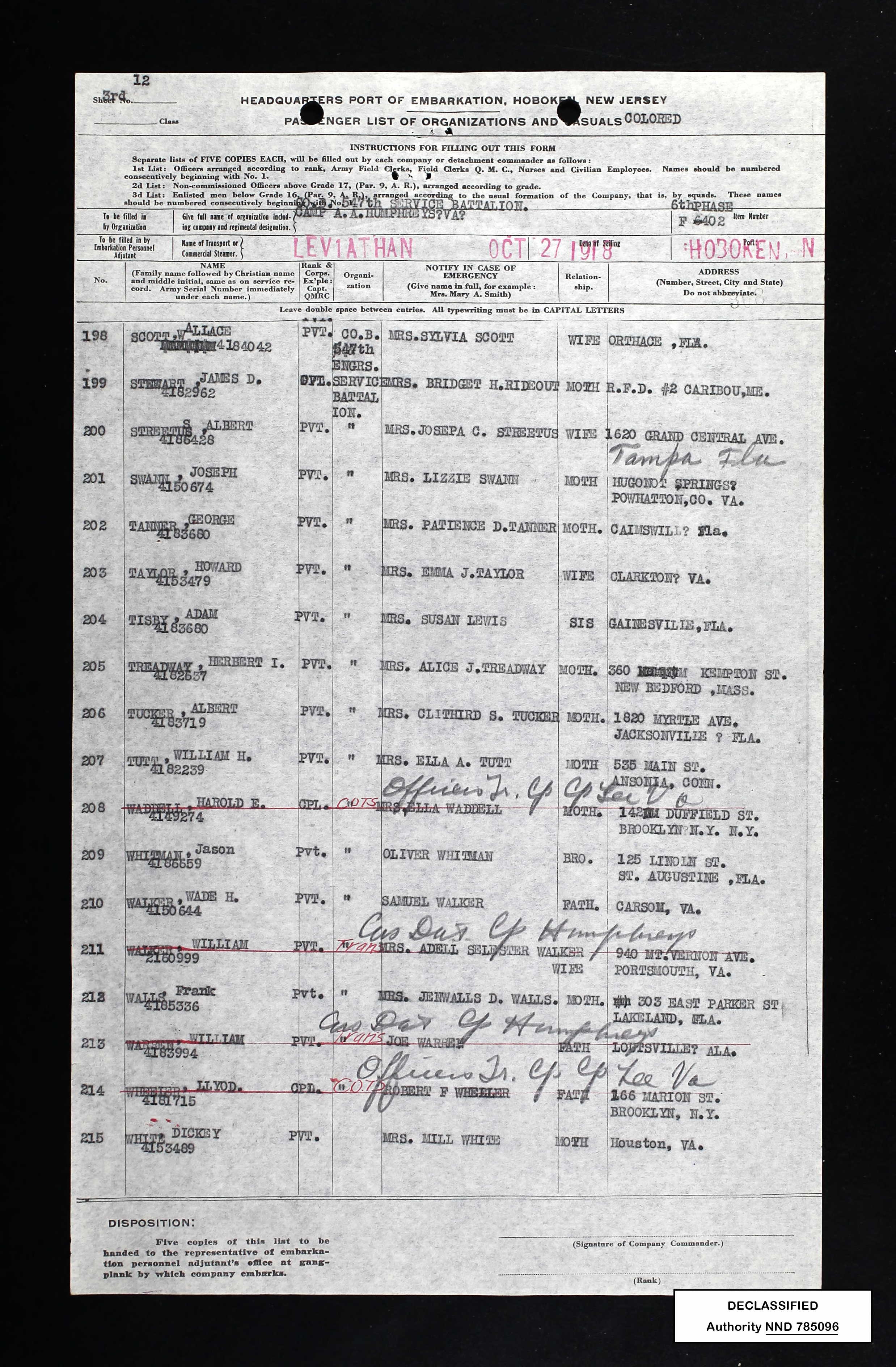 He was inducted August 4, 1918 and sent to Camp Devens, Massachusetts.5 At some point he joined the 547th Engineer Service Battalion, either in Camp Humphreys, Virginia, when the battalion was formed or in Camp Merritt, New Jersey, where the Battalion transited before leaving the United States from Hoboken, New Jersey. As seen on the passenger list, line 209, 6 Private Jason Waitman, with his battalion, boarded the USS Leviathan on October 27, 1918, for Liverpool, England. They reached their destination on Nov 3, 1918 and shipped out to Cherbourg, France, where they arrived on November 10, 1918, a day before the Armistice.7

In France, the 547th Engineers spent most of their service, in the Northern District and the upper Loire Basin. It was attached to the 20th Forestry Engineers and worked on the Fuelwood project, to provide wood to the American Expeditionary Forces (AEF). In France, the AEF needed wood to build railroads, docks, storage units, shelters, hospitals, bridges, trenches and to keep the troops warm in the winter time. With four years of war, France did not have the manpower anymore to supply wood to the American Army. Thus, the 20th Forestry Engineers and the 547th Engineer, used 107 sawmills on French soil to address this crucial need.8 The 547th Engineers sailed back home on board the USS Floridian, on July 5 1919, from Bordeaux, France, to Brooklyn, New York, where they arrived on July 15, 1919.9 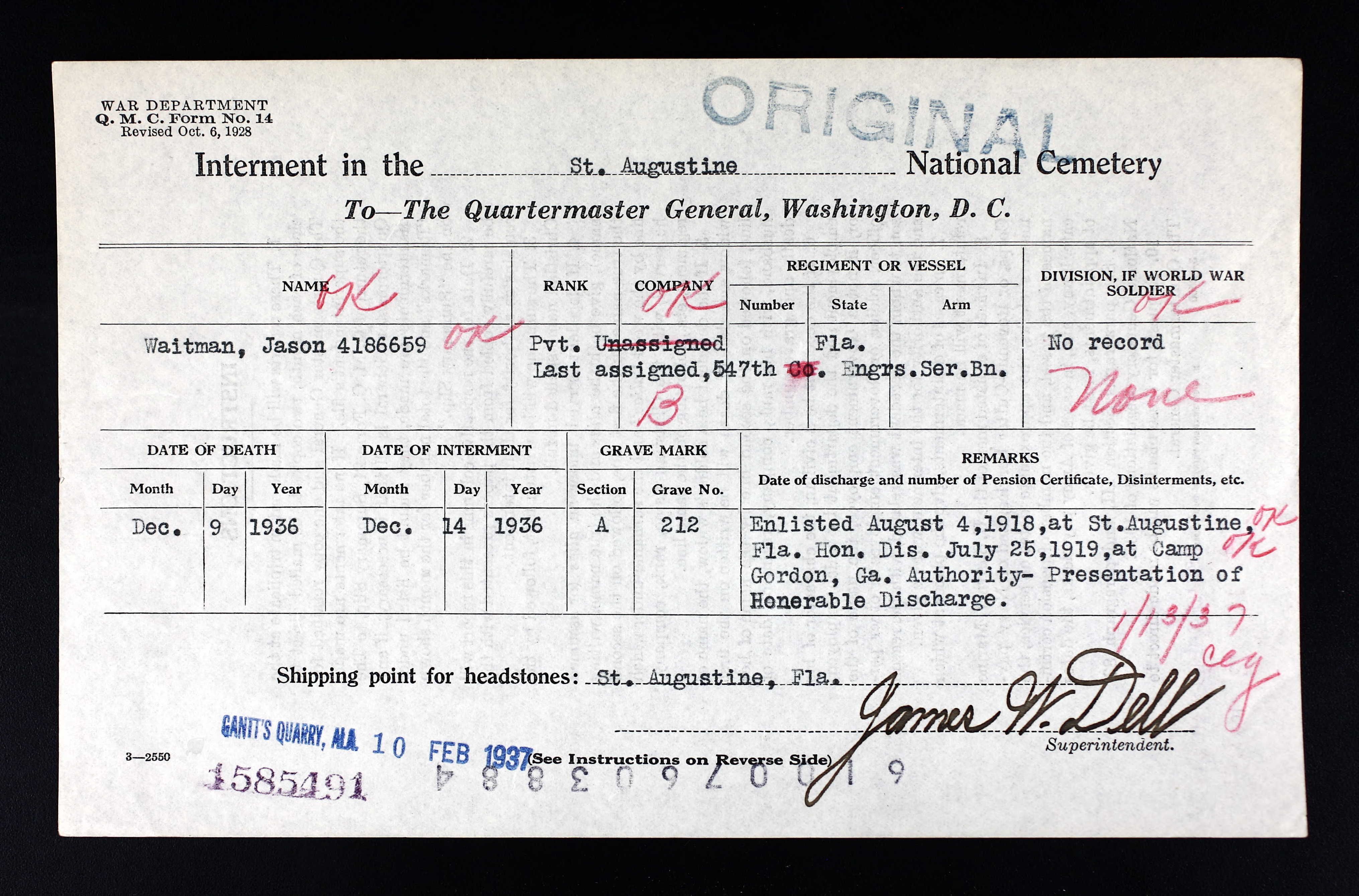 After the war, Jason Waitman came back to Columbia County where he resumed his position as an iceman.10 On September 16, 1921, he married Elmira Tunsil.11 He died in St Augustine, on December 9, 1936 of Lobar Pneumonia and was buried on Dec 14, 1936 in St Augustine National Cemetery, as seen on his internment card.12

6 On this passenger list, the name Waitman was misspelled Whitman, for Jason as well as for Oliver, one of Jason’s older brothers but the army serial number 4186659 below the name confirmed Jason Waitman identity.