Will Jamison was born in Lexington County, South Carolina, January 1, 1896. His parents, Melton and Anna Ammock, were farmers. The 1910 U.S. Census reports that “Willi” was the fourth of nine children. Tellingly, the same census reports that Melton could neither read nor write, though Anna could do both. Their firstborn son, twenty-year-old Matthew, also could do neither, but his eighteen-year-old sister Fibbi and sixteen-year-old Mary could read and write. Will had attended school in the past year, but at fourteen still could neither read nor write, and his twelve, ten, and eight-year-old siblings had not attended school in the year prior. All of this testifies to a family for whom literacy was still a desired luxury, and the tasks of subsistence farming an absolute necessity.1

Draft Card for Will Jamison

At some point Jamison moved to Sumter County and registered for the draft on June 5, 1917, as shown here. Before he joined the Army he worked as a laborer at J.J. Reader Saw Mill in New Zion, South Carolina. He was drafted on May 27, 1918, and trained at Camp Jackson in that state.2 Three months later, as a Private, he sailed on the SS Great Northern transport ship out of Hoboken, New Jersey, headed to France, for what would be the last three months of the war.3 The Germans had resumed unrestricted submarine warfare on February 1, and the Allies had only just organized a convoy system where groups of merchant ships sailed together protected by warships. Soldiers like Jamison were likely aware of the submarine threat during the transoceanic crossing.

Jamison served in Company C of the 520th Engineers. Engineers provided the Army with a wide array of capabilities including railway and road building. These units also repaired bridges and trenches. Racism and racist policies ensured that most African Americans performed hard labor during the war. After seven months of service overseas, Jamison boarded the SS Winifredian on May 29, 1919, arriving in Boston on June 9.4 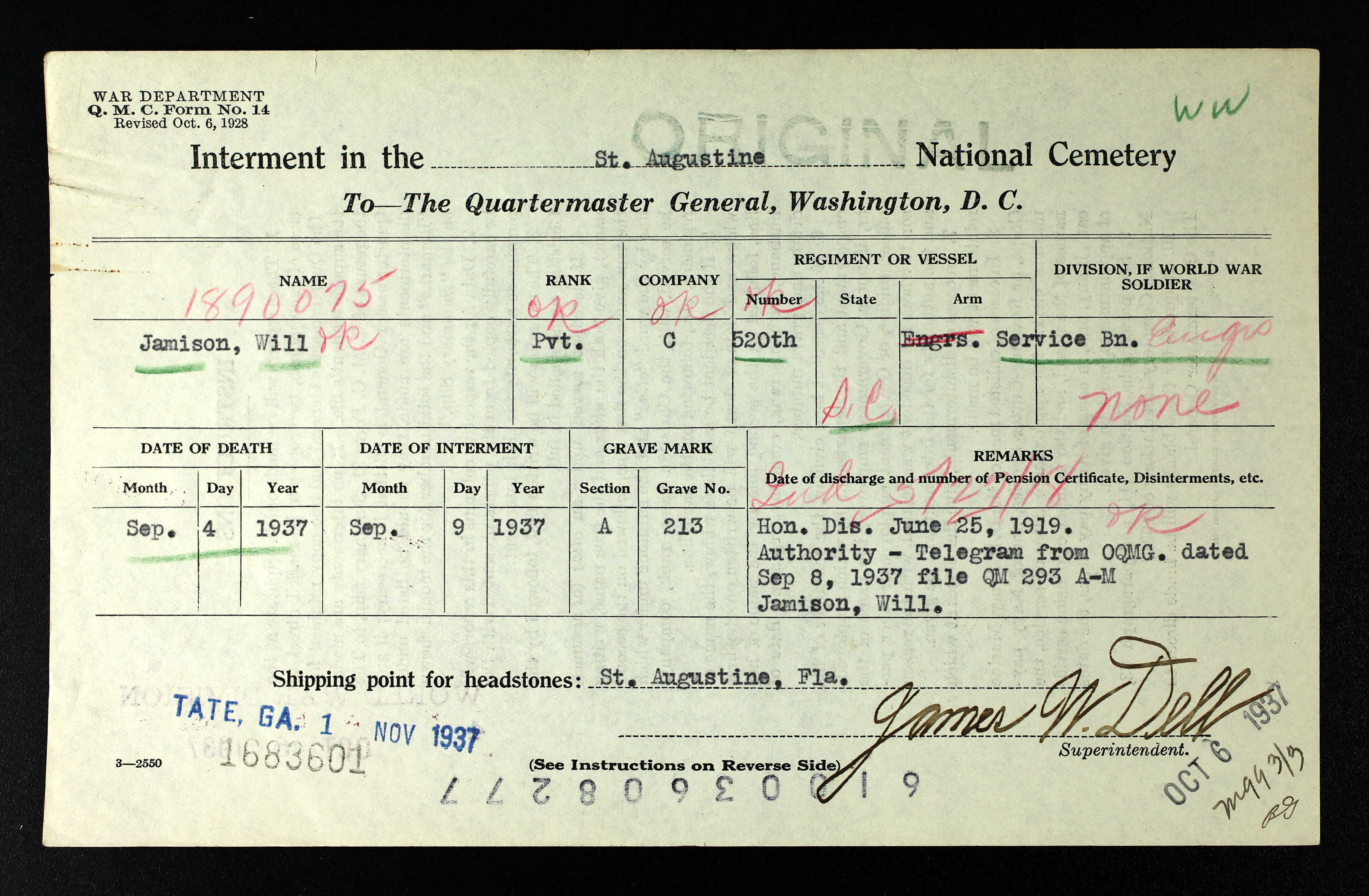 Internement Card for Will Jamison

Jamison was discharged June 25, and at some point later he must have moved down to Florida, because his Florida death certificate indicates that he had been living in Tallahassee, though he died in Lake City. He may have been at the Veterans’ hospital in that city. The only other details for the last eighteen years of his life are from the same document: he had still been a laborer, and he was divorced.5 According to his interment card, shown here, Jamison died on September 4, 1937 and was interred in St. Augustine National Cemetery on September 9, 1937. He is located within Section A, beneath Grave 213.6