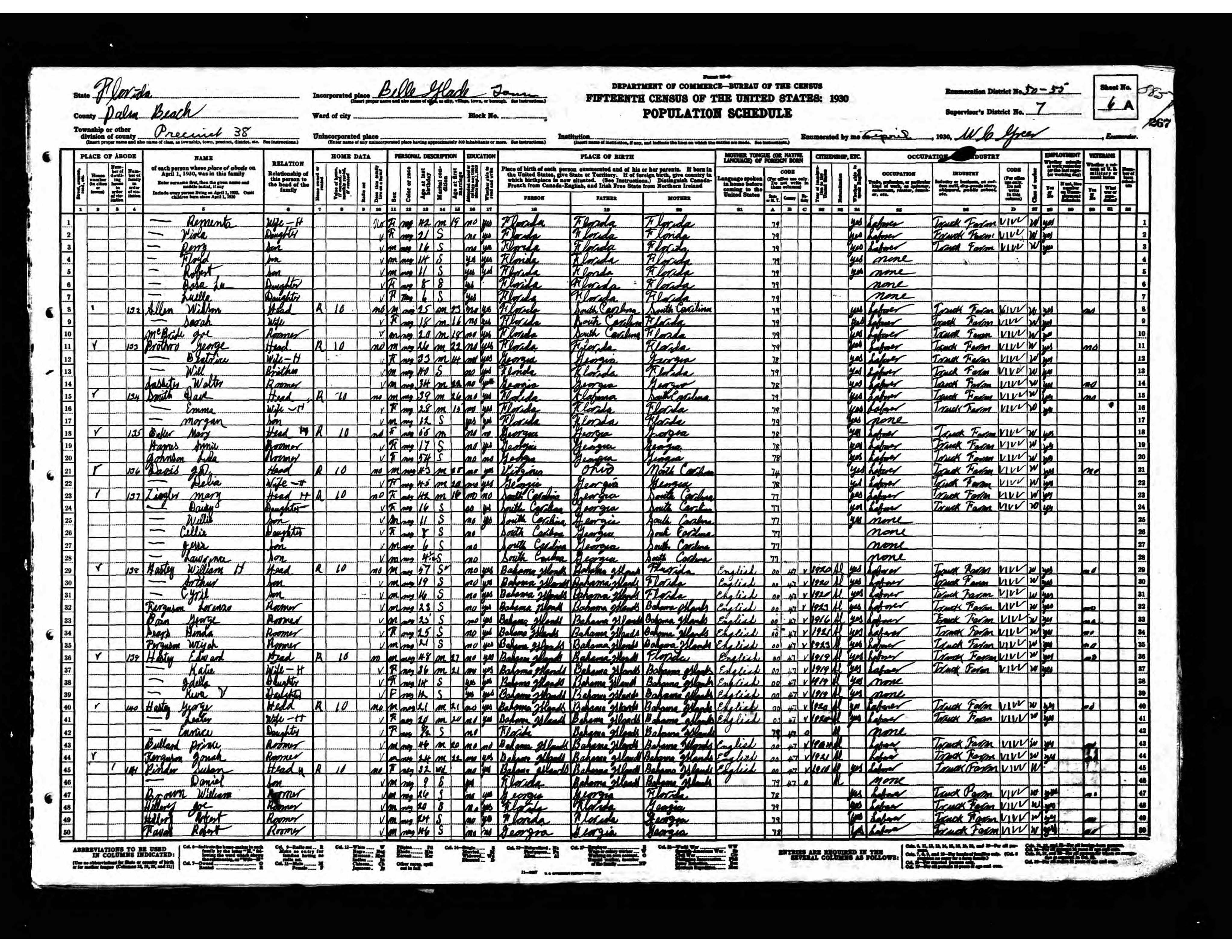 Willie Zeigler served during World War II in the Army where he achieved the rank of Corporal.1 Zeigler was born in Clarendon, South Carolina. His father (name unknown) was born in Georgia, while his mother Mary was born in South Carolina. He had at least two sisters and two brothers. By 1930, the family moved to Belle Glade, in Palm Beach County, Florida. As the head of the household, Zeigler’s mother Mary supported the family working as a laborer on a truck farm, as seen here on the 1930 US Census.2 Truck farms produced vegetables for market. While the Great Migration witnessed the movement of southern blacks to northern states like Illinois and New York, other black migrants came to Florida. During the 1920s farm depression, southern black laborers migrated to Florida to work the fruit and vegetable crops in Florida’s burgeoning truck-farms. In Belle Glade, many black laborers who lived near the Zeigler family worked in the truck farm industry.3 Zeigler lived in Belle Glade before he joined the military working as a truck driver for Crews Brothers.4 On April 14, 1941, Zeigler married Carrie Keno in Moore Haven, in neighboring Glades County, Florida.5

On May 9, 1942, the Army inducted Zeigler for military service. Zeigler served with the 369th Infantry Regiment.6 The 369th became one of the units that composed the Ninety-third Division, the first black division activated during World War II on May 15, 1942, at Fort Huachuca, Arizona. Like World War I, the Ninety-third Division was composed of white senior officers and black junior officers that included the draftee 369th Infantry Regiment, the veteran National Guard unit, the 368th Infantry Regiment, and the Twenty-fifty Infantry, a regular army regiment, along with various specialty battalions and companies.7 On June 8, 1942, Zeigler began training with his fellow soldiers in the 369th. In March of 1943, the Ninety-third participated in divisional exercises in southwest Arizona. Soon after, the Ninety-third proceeded to the Louisiana Maneuvers where they engaged in mock battles for three months with the Eighty-fifth Division, the first time a black division trained against a white division. In late-1943, Zeigler and the Ninety-third moved west to California going through desert training exercises.

Because the black community and their white allies protested the failure to deploy either all-black Division (the Ninety-second and Ninety-third) overseas, the Army finally deployed the Ninety-third in January 1944 to participate in South Pacific combat.8 Despite this deployment, upon arriving in Guadalcanal, the Army broke up the Ninety-third. The division remained a scattered, disjointed division for nearly fourteen months working with units across the Pacific. The Army sent Zeigler and the 369th along the 595th Field Artillery Battalion and other selected groups to the New Georgia Islands. During this period, the units of the Ninety-third did not see combat. Instead, they performed guard duty, unloaded ships, and stacked supplies. Eventually, Zeigler and his unit saw combat action, with a high point coming in the occupation of Morotai where the 369th captured Colonel Kisou Ouchi⎯one of the highest-ranking Japanese officers in the Pacific Theater.9 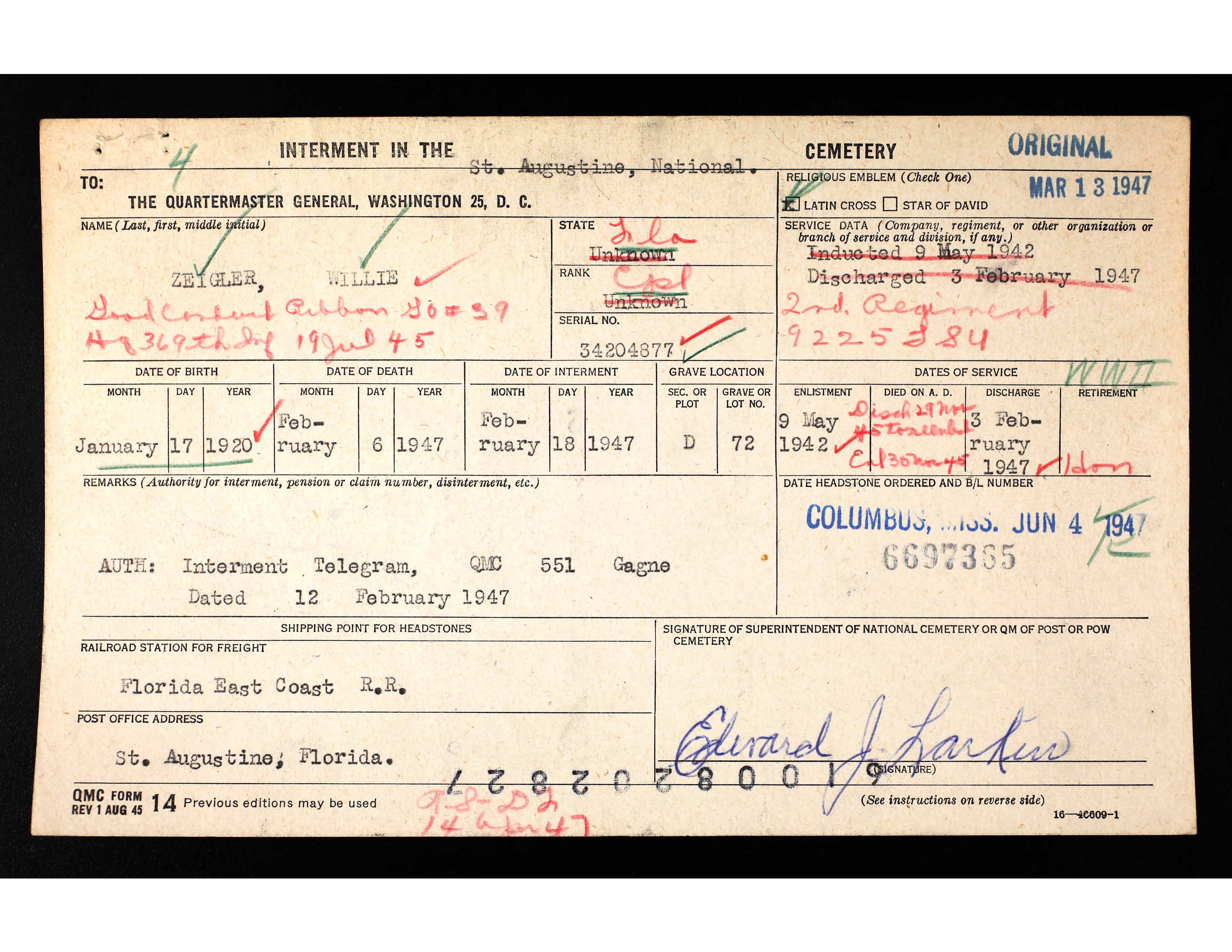 After the Japanese surrender in September of 1945, the Ninety-third Division moved to Mindanao in the Philippines. On November 29, 1945, the Army discharged Zeigler. The next day on November 30, Zeigler, now a corporal, re-enlisted in the Army as part of the Hawaiian Department.10 Zeigler remained in the Army until February 3, 1947. Three days after his discharge from the Army on February 6, 1947, Zeigler passed away in his native Palm Beach County at the age of twenty-seven. He was interred at the Saint Augustine National Cemetery in Section D, Plot 72, as seen here on his interment card.11