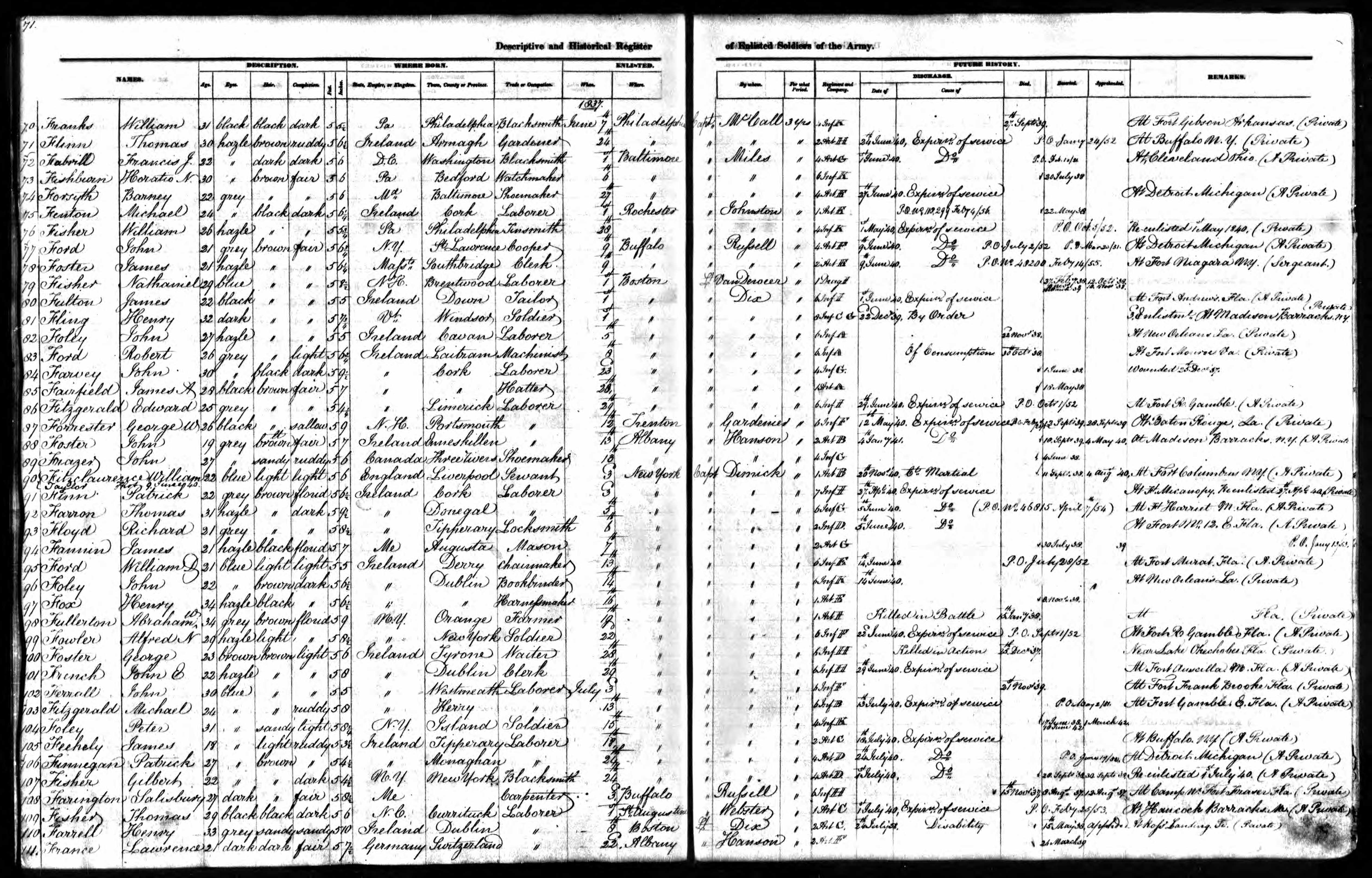 George Foster was born in County Tyrone, Ireland, in 1814. He immigrated to the United States sometime before 1837.1 Between the 1820s and 1860s, Irish immigrants made up one-third of immigrants into the United States.2 Immigrants from Ireland faced discrimination and racism upon arrival, and competition for jobs was fierce.3 Foster worked as a waiter when, at twenty-three years of age, he enlisted in the US Army out of New York City, as shown here.4 Foster enlisted in June 1837, during a period of wide-spread financial hardship.5 Former President Andrew Jackson’s financial policies had led to a severe economic depression beginning in the Spring of 1837; banks collapsed, businesses went bankrupt, and thousands lost their savings.6 It is possible that by June of 1837 Foster could not find work as a waiter and sought employment elsewhere.

The Army that Private Foster belonged to was very different than the twenty-first century US Army. It was much smaller with about 7,200 soldiers in its ranks organized into twelve regiments composed of four artillery, seven infantry, and one dragoon or cavalry regiments. Approximately 6,600 of these soldiers were enlisted men and about 600 were officers. This small army was scattered in fifty-three separate installations around the nation. Just before the Seminole War, 500 soldiers garrisoned ten bases across northern and central Florida. Many of these men were immigrants because soldiers, wherever they served, were poorly paid; they received five dollars a month. A civilian laborer made much more. As a result, recently arrived immigrants who needed work filled the ranks.7 As a result of the Second Seminole War, the regular Army almost doubled in size. Despite this expansion, 30,000 militia (part-time soldiers) and volunteer (newly-recruited) units reinforced the regular Army units in their campaigns in Florida against the Seminoles.8

Surpassed only by Dade’s Battle in terms of casualties, the Battle of Okeechobee occurred on December 25, 1837, two years after the war began. On Christmas Day, commanding officer Colonel Zachary Taylor led approximately 800 infantry regiment troops into battle against 380-480 Seminoles who were camped on the shore of Lake Okeechobee. The 6th and the 4th Infantry regiments led the attack at the Battle of Okeechobee, but the 6th Infantry bore the brunt of the Seminole’s fire.12 They lost four officers and sixteen privates, including Private Foster – far more than any other regiment in the engagement.13 Though Taylor claimed this battle as a great victory, the Seminoles – who had positioned themselves in a densely wooded area with a half mile of swamp in front of them – inflicted more extensive damage to the US troops than they themselves received. After three hours of battle, the Seminoles retreated in canoes across the lake, having lost less than seven percent of their men while Col. Taylor lost over seventeen percent of his forces. Further, the Seminoles successfully slowed Taylor’s march down the Kissimmee River long enough to evacuate their women and children farther into the Everglades. Public opinion regarding the battle’s outcome was initially mixed, but the nation eventually accepted Taylor’s claim of victory, propelling him into the national spotlight and initiating his road to the presidency.14 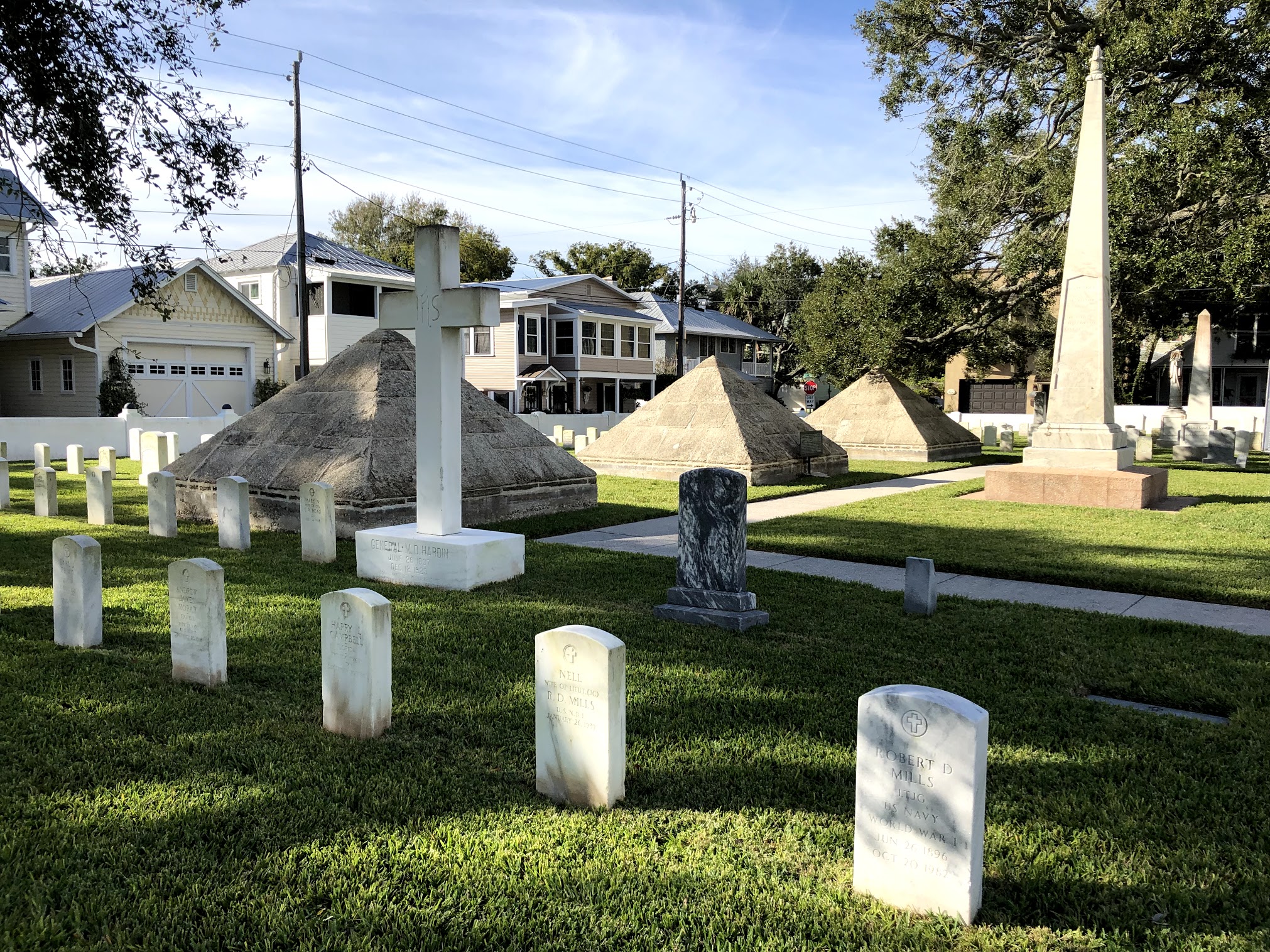 Along with some 1,500 US casualties of the Second Seminole War, George Foster is memorialized at St. Augustine National Cemetery in Florida. On June 13, 1842, as a prelude to the formal ending of the Second Seminole War, Col. William Worth announced that the remains of the officers who fell in the war would be gathered and reinterred in the burial ground next to the St. Francis Barracks in St. Augustine. The bodies of Maj. Francis Dade and his men were interred along with other regular soldiers in three massive vaults, each covered by an ornamental pyramid constructed of native coquina stone. Two years later, a granite obelisk was erected next to the pyramids. The US Government re-designated the St. Francis Barracks burial ground as St. Augustine National Cemetery in 1881. The so-called “Dade Pyramids” and memorial obelisk are believed to be among the oldest public monuments (excluding headstones) in the national cemetery system.15