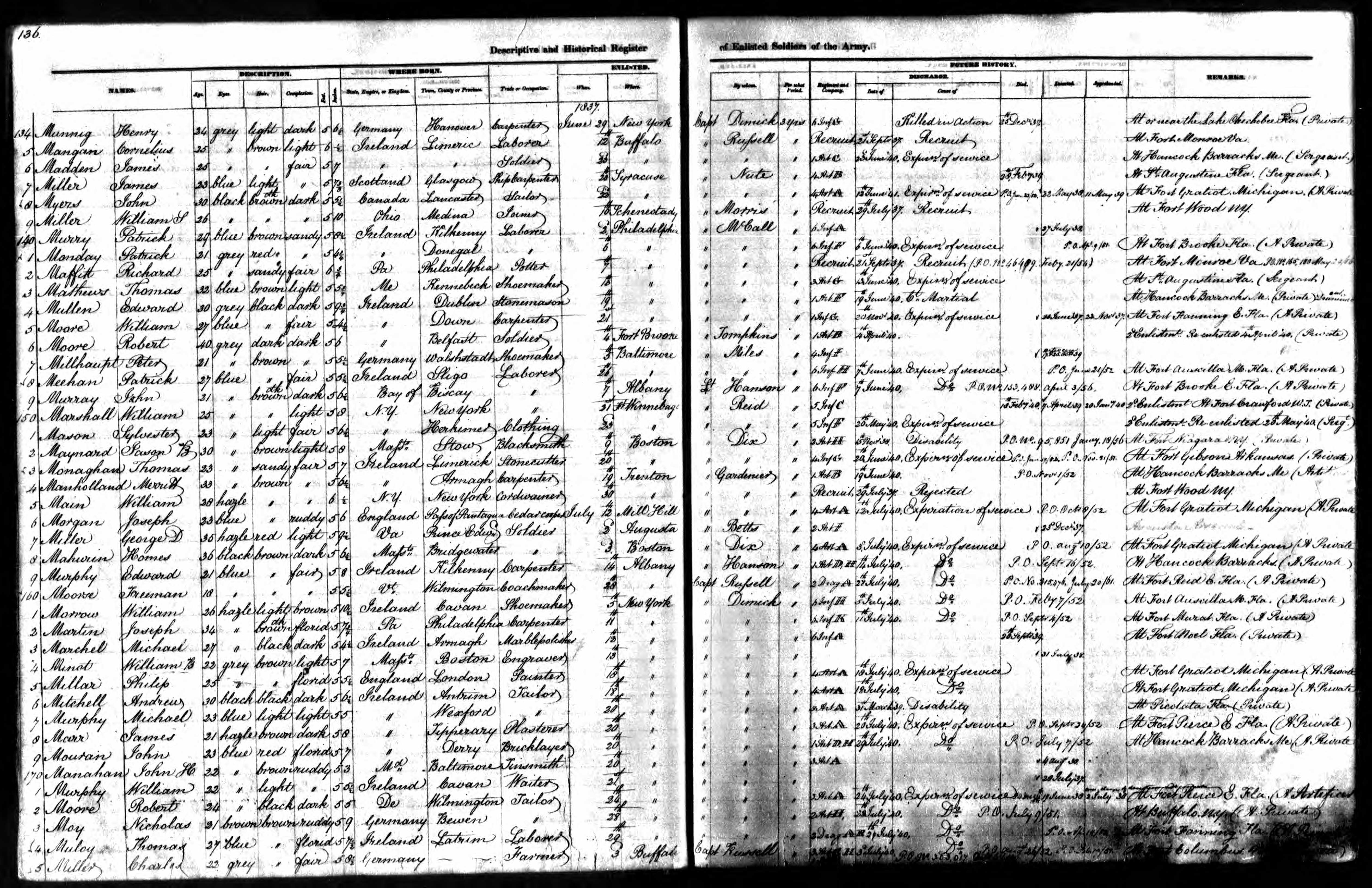 Henry Munnig was born in Hanover, Germany in 1813.1 Munnig likely immigrated to the United States in 1836, arriving in New York after leaving from Bremen, Germany.2 German immigration to the United States steadily increased in the nineteenth century. By 1832, more than 10,000 Germans had arrived in the United States.3 Many were working-class men and women in search of a better life. Some went to the West where land was cheap, while others settled in cities and engaged in the same urban craft trades that they had practiced in their homeland.4 Munnig was one of these skilled workers, a carpenter by trade.5 Around twenty-four years of age, Munnig enlisted in the US Army out of New York City, as seen here.6

The army that Private Munnig belonged to was very different than the twenty-first century US Army. It was much smaller with about 7,200 soldiers in its ranks organized into twelve regiments composed of four artillery, seven infantry, and one dragoon or cavalry regiments. Approximately 6,600 of these soldiers were enlisted men and about 600 were officers. This small army was scattered in fifty-three separate installations around the nation. Just before the Seminole War, 500 soldiers garrisoned ten bases across northern and central Florida. Many of these men were immigrants because soldiers, wherever they served, were poorly paid; they received five dollars a month. A civilian laborer made much more. As a result, recently arrived immigrants, who needed work filled the ranks. As a result of the Second Seminole War (1835-1842), the regular army almost doubled in size. Despite this expansion, 30,000 militia (part-time soldiers) and volunteer (newly-recruited) units reinforced the regular Army units in their campaigns in Florida against the Seminoles.7

Fought between 1835 and 1842, the Second Seminole War was part of a larger conflict between Native Americans in Florida and the United States military that lasted from 1816 to 1858. In alignment with the goals of the Indian Removal Act (1830), the United States government sought to move all the Florida Native Americans, collectively—though inaccurately—referred to as Seminoles, from the peninsula to the Indian Territory (modern-day Oklahoma). Fighting in a harsh environment, against a mobile foe using guerrilla tactics, and without clear frontlines, the army struggled to defeat their outnumbered enemy. While estimates vary, approximately 10,000 soldiers and as many as 30,000 militia fought against fewer than 2,000 Seminole warriors. Eventually, after seven years, the death of 1,400-1,500 regular army soldiers, and the expenditure of $30,000,000-$40,000,000, the United States declared victory even while some Seminoles remained in Florida. Given these hardships, the Second Seminole War is generally considered “the longest and most costly of the Indian conflicts.”8

Munnig was part of Company G in the 6th Infantry Regiment. Congress officially created the 6th Infantry Regiment in 1808. The 6th Infantry first participated in the War of 1812 and then moved along the western US frontier, where the soldiers built forts and engaged in skirmishes with the Native Americans, most notably in the Black Hawk War of 1832. The US Government ordered the 6th Infantry to proceed to Florida in 1836, amidst rising tension between the United States and the Seminoles.9 Most of the 6th Infantry, under the command of Lt. Col. Alexander R. Thompson, joined a larger force led by Col. Zachary Taylor, which moved south with orders to “destroy or capture” any Seminoles they might find.10 The 6th and the 4th Infantry regiments led the attack at the Battle of Okeechobee, but the 6th Infantry bore the brunt of the Seminoles’ fire.11 They lost four officers and sixteen privates, far more than any other company in the engagement.12

Surpassed only by Dade’s Battle in terms of casualties, the Battle of Okeechobee occurred on December 25, 1837, two years after the war began. On Christmas Day, commanding officer Colonel Zachary Taylor led approximately 800 infantry regiment troops into battle against 380-480 Seminoles who were camped on the shore of Lake Okeechobee. Though Taylor claimed this battle as a great victory, the Seminoles – who had positioned themselves in a densely wooded area with a half mile of swamp in front of them – inflicted more extensive damage to the US troops than they themselves received. After three hours of battle, the Seminoles retreated in canoes across the lake, having lost less than seven percent of their men while Col. Taylor lost over seventeen percent of his forces. Further, the Seminoles successfully slowed Taylor’s march down the Kissimmee River long enough to evacuate their women and children farther into the Everglades. Public opinion regarding the battle’s outcome was initially mixed, but the nation eventually accepted Taylor’s claim of victory, propelling him into the national spotlight and initiating his road to the presidency. 13 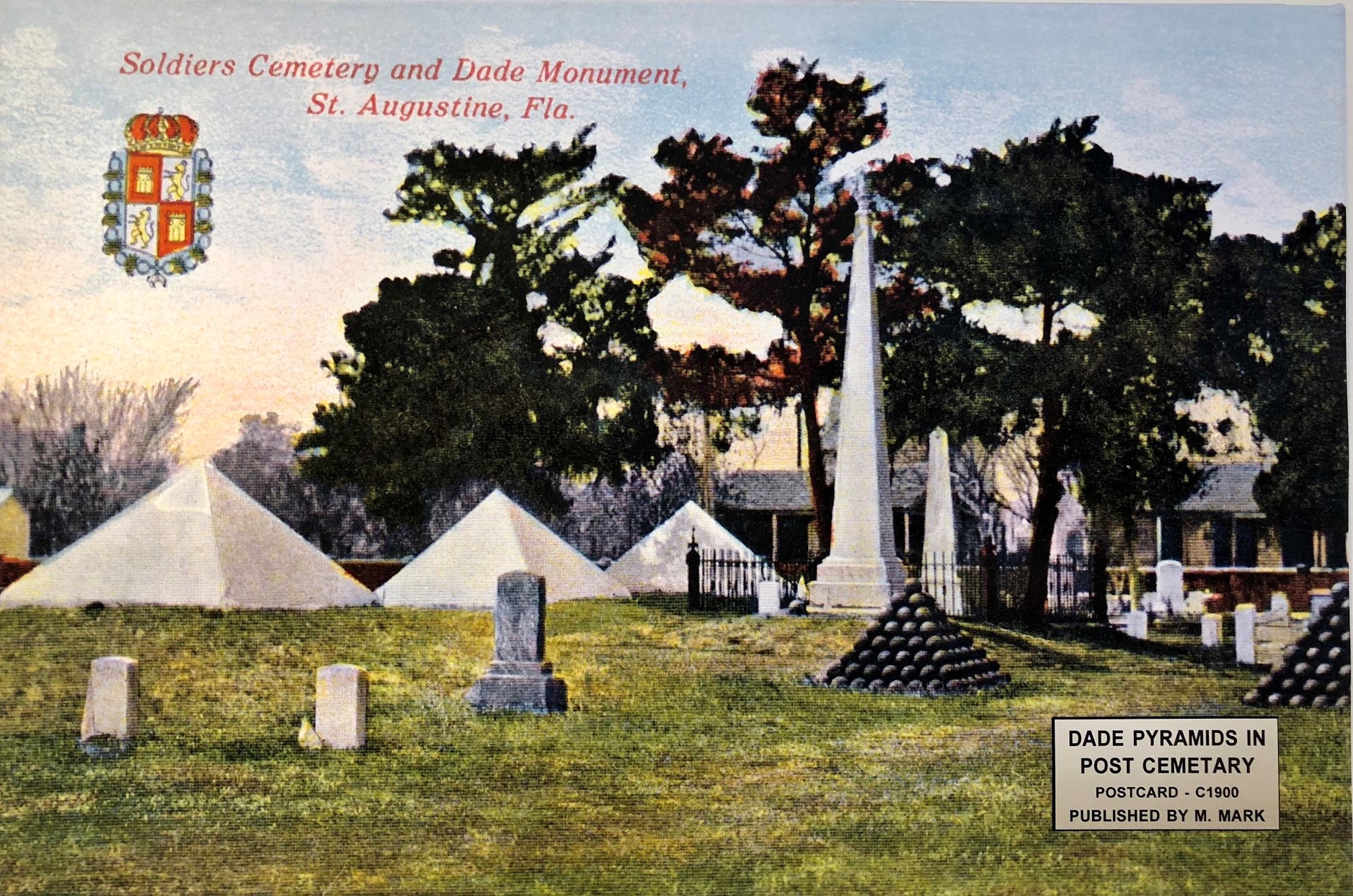 Along with some 1,500 US casualties of the Second Seminole War, Private Henry Munnig is memorialized at St. Augustine National Cemetery.14 On June 13, 1842, as a prelude to the formal ending of the Second Seminole War, Col. William Worth announced that the remains of the officers who fell in the war would be gathered and reinterred in the burial ground next to the St. Francis Barracks in St. Augustine. The bodies of Maj. Francis Dade and his men were interred along with other regular soldiers in three massive vaults, each covered by an ornamental pyramid constructed of native coquina stone. Two years later, a granite obelisk was erected next to the pyramids. The US Government re-designated the St. Francis Barracks burial ground as St. Augustine National Cemetery in 1881. The so-called “Dade Pyramids” and memorial obelisk are believed to be among the oldest public monuments (excluding headstones) in the national cemetery system.15

12 Bryne, “The Sixth Regiment of Infantry.”