John Slade Gatlin was born in 1806 to a prominent family in Kinston, North Carolina. His father was a farmer and merchant in the area while his mother, Susannah Caswell, was the daughter of Richard Caswell, North Carolina’s first governor. He had one brother, Richard, who was the Second Lieutenant serving with the Seventh Infantry at Fort Gibson, and two sisters. Gatlin attended the University of North Carolina in 1826 and served as an apprentice under a local doctor.1 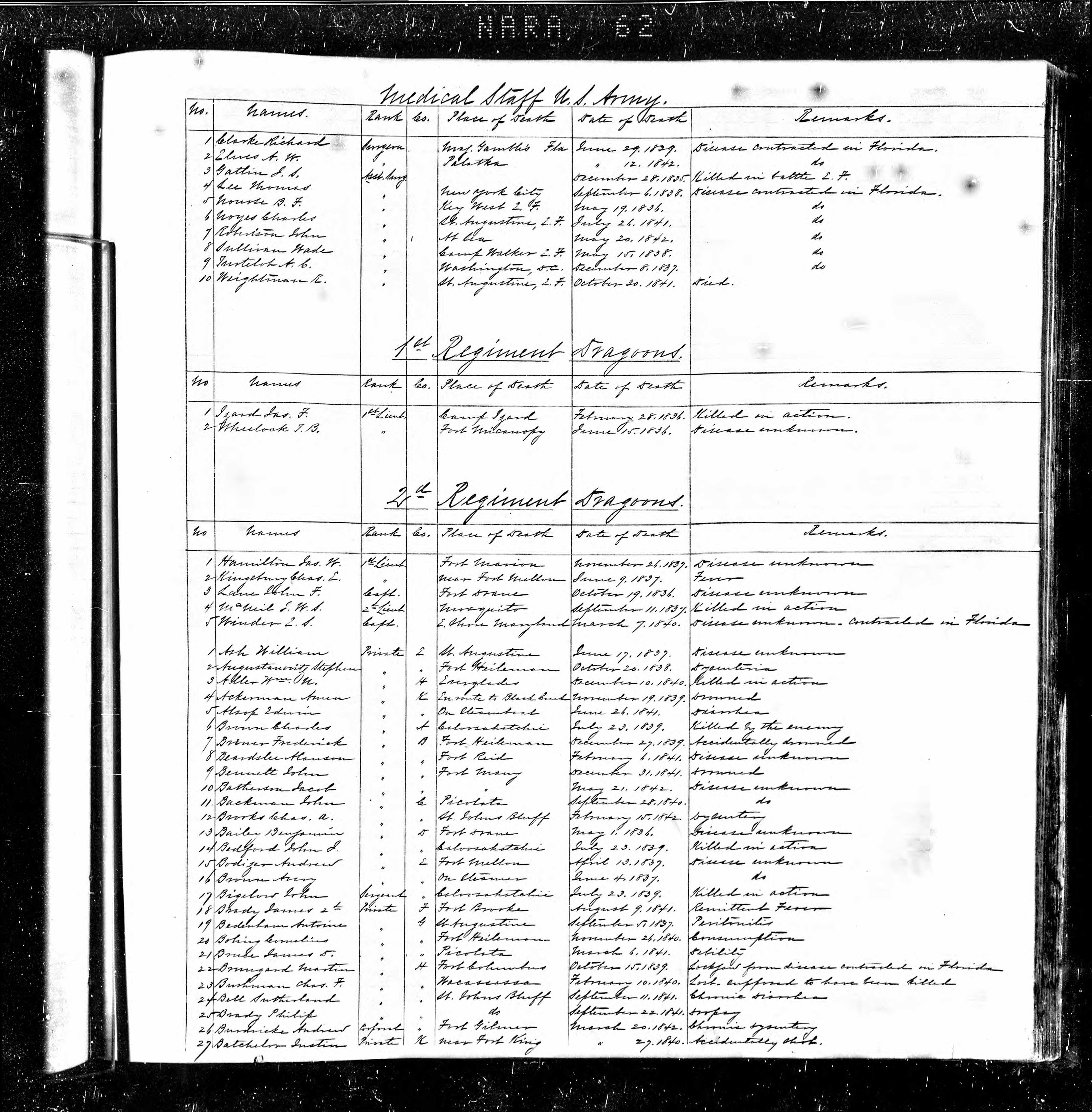 On August 3, 1834, Gatlin entered the Army as an assistant surgeon, as seen here, but struggled to find a posting he was happy with. Despite wishing to stay close to his home in North Carolina, the Army constantly moved him farther west or north. Writing to the surgeon general, he explained his desire to stay in North Carolina, with Florida being his second choice for its mild climate. Finally, in 1835, Gatlin was assigned to Fort Brooke in Tampa, Florida, then ordered to travel with Dade’s company to Fort King.2

The Army that Assistant Surgeon Gatlin belonged to was very different than the twenty-first century US Army. It was much smaller with about 7,200 soldiers in its ranks organized into twelve regiments composed of four artillery, seven infantry, and one dragoon or cavalry regiments. Approximately 6,600 of these soldiers were enlisted men and about 600 were officers. This small army was scattered in fifty-three separate installations around the nation. Just before the Seminole War, 500 soldiers garrisoned ten bases across northern and central Florida. Many of these men were immigrants because soldiers, wherever they served, were poorly paid; they received five dollars a month. A civilian laborer made much more. As a result, recently arrived immigrants who needed work filled the ranks. As a result of the Second Seminole War (1835-1842), the regular Army almost doubled in size. Despite this expansion, 30,000 militia (part-time soldiers) and volunteer (newly-recruited) units reinforced the regular Army units in their campaigns in Florida against the Seminoles.3

Fought between 1835 and 1842, the Second Seminole War was part of a larger conflict between Native Americans in Florida and the United States military that lasted from 1816 to 1858. In alignment with the goals of the Indian Removal Act (1830), the United States government sought to move all of the Florida Native Americans, collectively—though inaccurately—referred to as Seminoles, from the peninsula to the Indian Territory (modern-day Oklahoma). Fighting in a harsh environment, against a mobile foe using guerrilla tactics, and without clear frontlines, the army struggled to defeat their outnumbered enemy. While estimates vary, approximately 10,000 soldiers and as many as 30,000 militia fought against fewer than 2,000 Seminole warriors. Eventually, after seven years, the death of 1,400-1,500 regular US Army soldiers, and the expenditure of $30,000,000-$40,000,000, the United States declared victory even while some Seminoles remained in Florida. Given these hardships, the Second Seminole War is generally considered “the longest and most costly of the Indian conflicts.”4

In December 1835, tensions between the US military and the Seminoles were increasing. In response to these potential hostilities, Brevet Major Francis L. Dade led an expedition of 108 men from Fort Brooke (present-day Tampa) that headed north toward Fort King (near present-day Ocala) with the purpose of reinforcing the Indian Agency near there. The troops departed on December 23. Five days later, a party of 180 Seminole warriors led by Micanopy, Alligator, and Jumper ambushed the marching column just outside of modern-day Bushnell, Florida. Maj. Dade and several officers fell immediately. A 45-minute interval followed the first attack, during which the besieged US troops built a triangular breastwork of logs defended by a six-pounder cannon. Their position, however, proved indefensible. All but four out of the 108 soldiers in Dade’s Command died on the field of battle. In contrast, the Seminoles suffered only eight casualties (three killed and five wounded). The battle is generally considered to be the opening shots of the seven-year Second Seminole War.5

Of the four soldiers who survived, only three – Pvts. Ransom Clark, John Thomas, and Joseph Sprague – made it back to Fort Brooke alive.6 Pvt. Edwin DeCourcy (who traveled part of the way with Clark) died en route. Clark gave an eyewitness account of the battle, and his harrowing return, in an interview with the Boston Post, published June 6, 1837.7 Dade’s enslaved African American interpreter-guide, Luis Fatio Pacheco, also survived; he was taken prisoner by the Seminoles and recounted his own harrowing journey in interviews published many years later.8

Two months after the battle, Gen. Edmund Gaines and his men arrived at the Dade battlefield to assess the scene and bury the dead. Second Lt. James Duncan described the scene: “The first indication of our proximity to the battlefield were soldiers’ shoes and clothing, soon after a skeleton then another! then another! Soon we came upon the scene in all its horrors. The vultures rose in clouds as the approach of the column drove them from their prey, the very breastwork was black with them.”9

Along with some 1,500 US casualties of the Second Seminole War, Assistant Surgeon Gatlin is memorialized at St. Augustine National Cemetery in Florida.10 On June 13, 1842, as a prelude to the formal ending of the Second Seminole War, Col. William Worth announced that the remains of the officers who fell in the war would be gathered and reinterred in the burial ground next to the St. Francis Barracks in St. Augustine. The bodies of Maj. Francis Dade and his men were interred along with other regular soldiers in three massive vaults, each covered by an ornamental pyramid constructed of native coquina stone. Two years later, a granite obelisk was erected next to the pyramids. The US Government re-designated the St. Francis Barracks burial ground as St. Augustine National Cemetery in 1881. The so-called “Dade Pyramids” and memorial obelisk are believed to be among the oldest public monuments (excluding headstones) in the national cemetery system.11 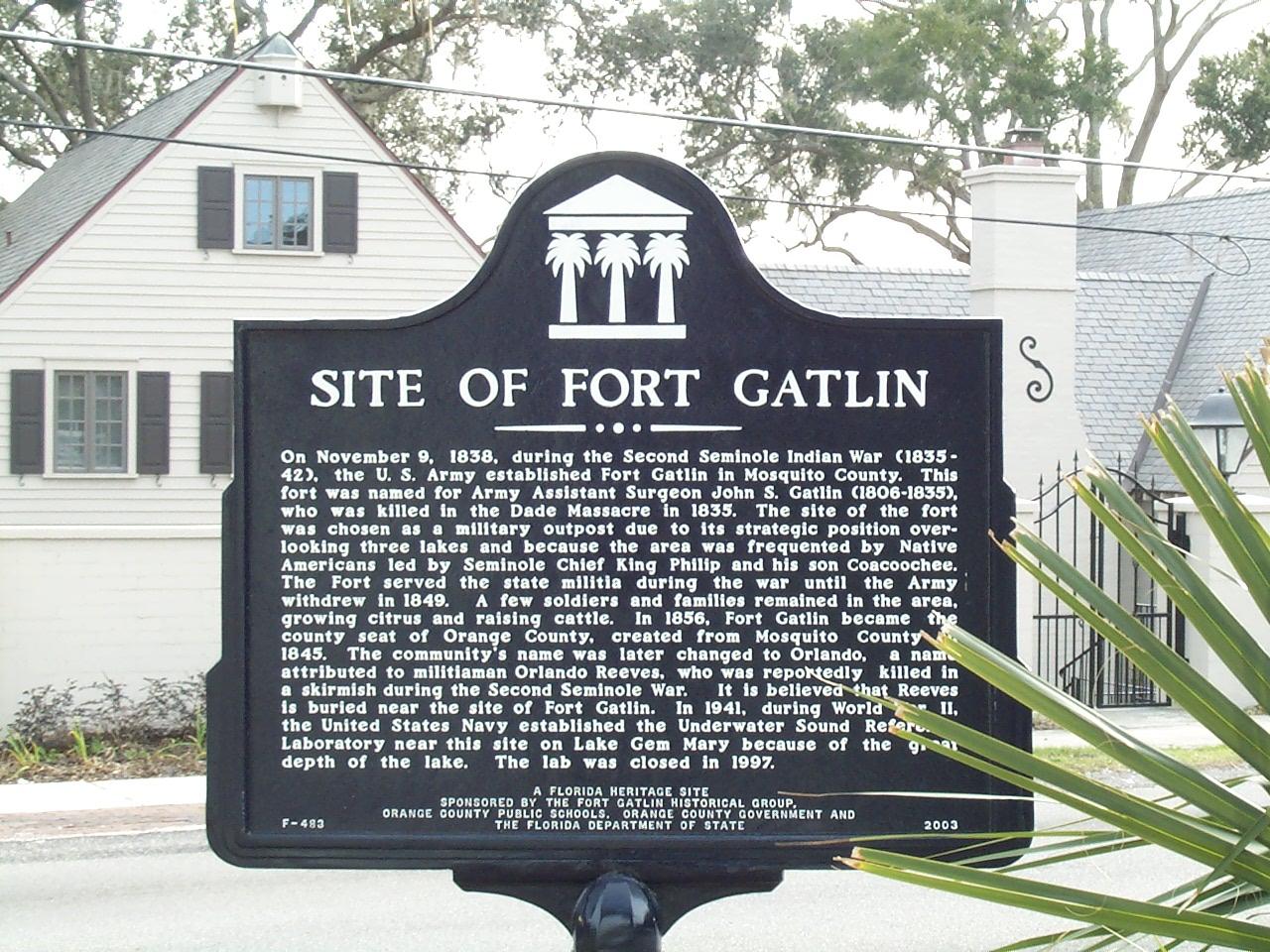 In 1838, a fort was established during the continuing Second Seminole War in honor of Assistant Surgeon Gatlin. The fort remained in service until 1849, but many soldiers and their families settled in the area. In 1856, the area that was still referred to as Fort Gatlin became the county seat for Orange County, Florida. Today, a historic marker, as seen here, is situated in modern-day Orlando at the site of the historic fort, which is located between Summerlin Avenue and Gatlin Avenue.12