John William Donaldson was born on September 8, 1897, in Waldo, FL, to John F. Donaldson and Hattie M. Donaldson. He was the youngest of seven children, with three older brothers: Drayton, (1876), Ernest (1886), Oscar, (1888), and three older sisters, Ada (1879), Myrtie, (1880) and Pearl (1894).1 John’s father served as a private in the US Army, having enlisted at the age of 19 on August 22, 1854. He fought in the Third Seminole War as part of the 1st Co. Florida Mounted Volunteers. 2 He also served in the Confederate Army during the Civil War, in Company B of the 2nd Regiment of the Florida Cavalry.3 According to the 1910 US Census, the family owned their own farm in Alachua County. By 1910, Ernest and Oscar worked as manual laborers while John and Pearl attended school. Drayton, Ada, and Myrtie, the three older siblings, had left home.4

After John F. Donaldson’s death on September 12, 1916, Hattie and her children moved to Brooksville, FL, where they rented a house.5 We do not know for sure why Hattie left the farm, but since few women owned land in 1916, she may not have felt she could manage a farm, including numerous male laborers, even with some of her children’s help; downsizing may have seemed a more practical option for her.6

At the age of twenty, John W. Donaldson enlisted in the Army on March 9, 1918 in Jacksonville, FL.7 He was assigned to the Motor Transport Corps of the 5th Division of the US Army.8 He trained at Jacksonville’s Camp Johnston, the hub for the Quartermaster Corps in the US. The Quartermaster Corps is responsible for logistics and transporting supplies. Recruits received two weeks of basic military training before receiving specialty training.9 Donaldson joined Co. 2 of the Chauffeurs Detachment, likely due to previous experience with tractors on his family’s farm.10 The Army valued his driving skills, as not many people could drive at the dawn of the automobile age.11

Camp Johnston, the largest training camp in Florida, trained more than 82,000 men over the course of the war.12 Since he grew up in a rural area, this may have been the first time Donaldson experienced such a bustling atmosphere. By June 1918, Donaldson’s company left Jacksonville via rail for Camp Merritt, NJ. There they received new clothing, helmets, and gas masks. Donaldson arrived for troop transport with preparations in full swing; many soldiers shipped out right away, not even staying overnight in Camp Merritt.13

On June 10, 1918, he sailed from Hoboken, NJ, aboard the USS America, a former German luxury cruise liner commandeered by the US Navy.14 With 5,305 troops aboard, well above the ship’s capacity, everyone faced cramped conditions.15 In its haste to get troops overseas, the Navy loaded ships at 150 percent capacity. In some cases, with more soldiers than bunks, they had to sleep in shifts.16 The nine-day voyage concluded on June 19 in the port of Brest in north eastern France.17

Upon arrival, the troops went to Camp Pontanezen, in Brest, to rest, although the soldiers staying here did not regard the camp as a rest camp. The camp struggled to keep up with the influx of soldiers, so conditions were miserable. The barracks could not house all the troops, and many slept in muddy tents pitched in the cold and damp weather. Because of this, many soldiers worked to build more barracks to accommodate influx.18 We do not know how long Donaldson stayed at this camp or if he helped build some of the barracks, but he likely experienced the terrible conditions.

The 5th Division participated in the Battle of St. Mihiel (September 12-16, 1918), which was the first and only US Army led offensive during the war.19 At St. Mihiel, US forces moved to attack a German salient south of Verdun. While the battle proved to be a success, the logistics of supply management became an issue in the battle. Due to the large number of men, basic supplies, such as food and water, became backed up between the lines which prevented these necessities from arriving at the front.20 As part of the Chauffeur Detachment, Donaldson would have experienced these problems first-hand.

Donaldson also participated in the Meuse-Argonne Offensive (September 26-November 11, 1918), as part of the 5th Division. The largest land engagement in US Army history, it left 26,000 American soldiers dead and over 92,000 wounded.21 The Quartermaster Corps remained behind the front lines in order to supply the infantry with food, ammunition, and other necessities.22 Yet, as the Germans regularly used long-range artillery to target supply lines, and unlike earlier battles, the front lines moved, sometimes several miles every day during the final weeks of the war, soldiers behind the lines often faced front line conditions. As a chauffeur, Donaldson may have driven senior officers, but it is also likely that he drove a supply truck or operated the tractors used to pull artillery guns. At some point in the intense six-week battle, Donaldson sustained shrapnel wounds on his left knee and burns on his neck, possibly from a long-range artillery shell meant to stop the Americans from keeping the front supplied.23

When the armistice ended fighting on November 11, 1918, many soldiers, including Donaldson, stayed in France for several months. The US Army had difficulty demobilizing the two-million troops overseas with the constraints on ship capacities. The Army assigned many segregated African-American units to stay and bury or rebury the dead, and help with the difficult task of rebuilding war-torn France. This allowed many white units to rest. Fearful that bored white troops might get into trouble with too much free time, the Army enforced strict regimes of target practice and drills, as well as education and sporting events.24 Donaldson may have found a more useful role during his final months in France, since just before he set sail from Bordeaux on the USS Heron on June 29, 1919, he was promoted to Corporal.25 He received an honorable discharge on July 20, 1919. Just a few months later, Donaldson re-enlisted on October 11, 1919.26 It could be that he did not find work in Brooksville, or that the Army sought his valuable experience with motor vehicles. Donaldson, posted to Camp Cross Keys, GA, earned another promotion to Sergeant by the end of the year.27 Donaldson received a second honorable discharge on May 3, 1920 at the rank of Sergeant Major, the highest rank a non-commissioned officer can earn. 28 This provides us with evidence that Donaldson excelled at his job. 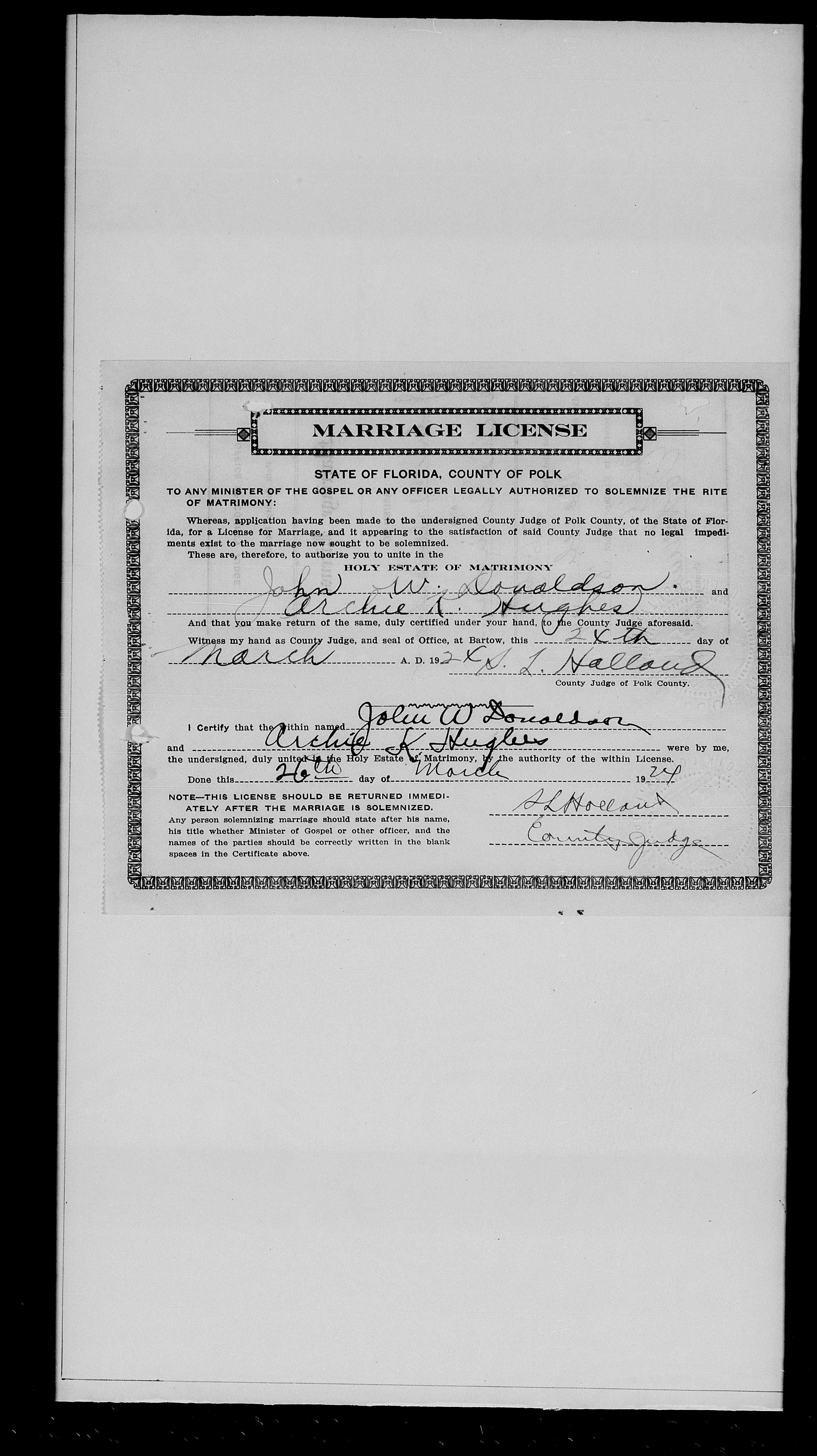 Donaldson returned to Florida again, and married Archie K. Hughes on March 26, 1924 in Winter Haven, FL, as seen here.29 In 1929, the couple had a son named Delbert. By 1930, Donaldson’s health started to decline, as he sought treatment for tuberculosis (TB) at a VA hospital in North Carolina in 1930.30 Soldiers behind the lines, such as Donaldson, often suffered from gas exposure, as mustard gas drifted well beyond the front, or sat in craters and along quickly shifting front lines. Once disturbed, it could inflict injury to new victims.31 Donaldson’s postwar health problems suggest he may have suffered some level of mustard gas exposure. Moreover, the combination of insufficient ventilation in cramped conditions in camps and on the ships returning to the US, and inadequate medical care during and after the war, allowed TB to thrive in already weakened lungs.32 During this time, Archie and Delbert lived with Archie’s sister and brother-in-law in Winter Haven.33 While we cannot know if Donaldson’s health issues played a role in their marriage ending, by 1931, the two divorced.34 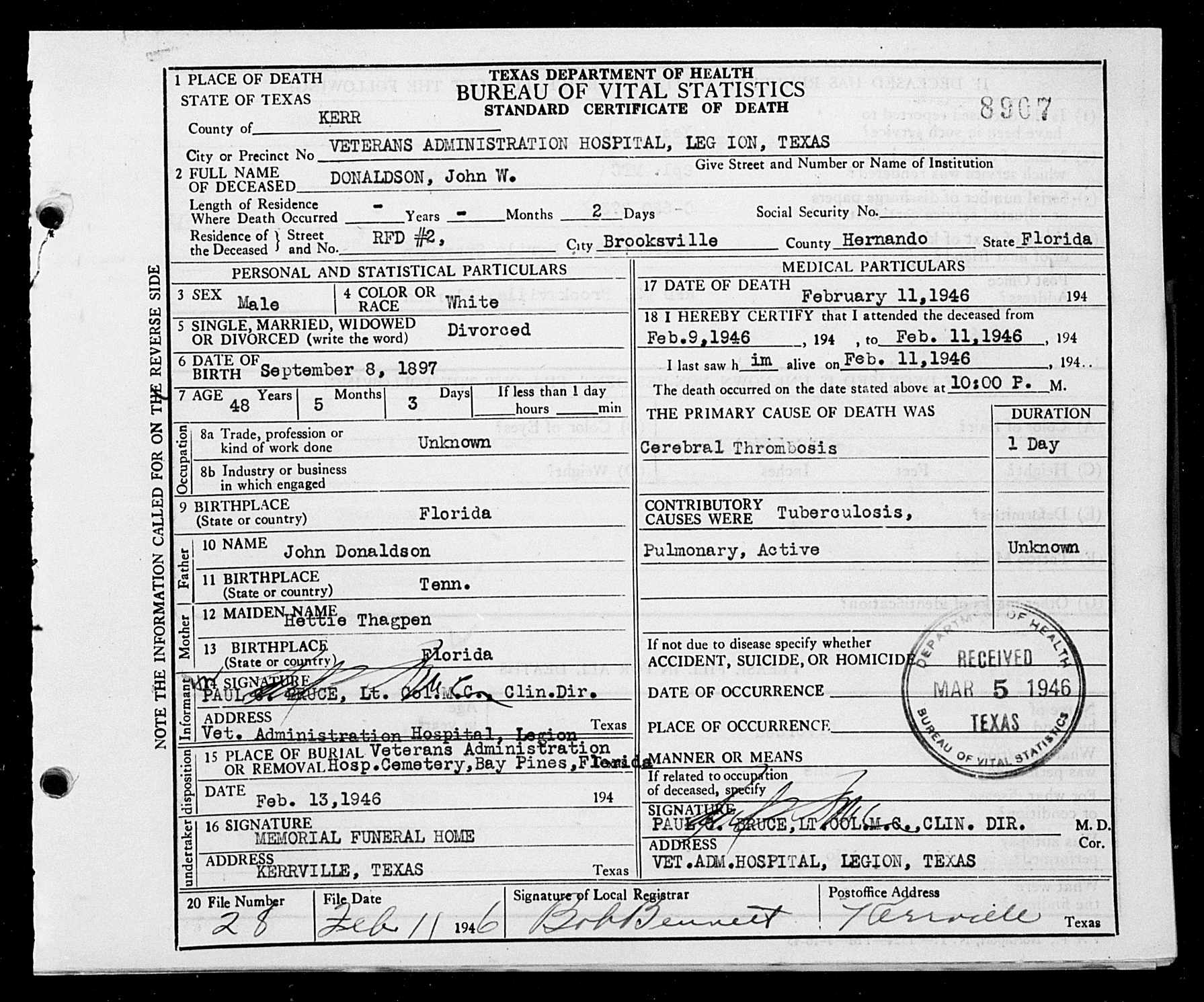 Donaldson continued to suffer from chronic health problems. In early 1937, he was admitted to the newly opened Bay Pines VA Hospital in the Tampa Bay Area.35 We do not know how long he stayed for treatment at Bay Pines Hospital, but by April 10, 1937, Donaldson married Lillie May Holloway in Okaloosa County, FL.36 This marriage also ended in divorce,37 although we are not sure when the divorce took place. By 1944, Donaldson lived in Brooksville with his older sister and brother-in-law, Frank and Myrtie Sparkman.38 Due to continuing health problems, Donaldson went to the VA hospital in Kerrville, TX on February 9, 1946. He likely received treatment for TB, as the hospital specialized in treating Veterans suffering from what was then an incurable lung disorder.39 According to his death certificate, here, Donaldson died two days later, on February 11, at only forty-eight years of age, due to cerebral thrombosis, a blood clot.40 His family likely requested he be returned to Tampa where he could be buried close to home. He rests in Bay Pines National Cemetery, in Section 11, Row 2, Site 13.41