On February 3, 1891, Anastasia Nussell gave birth to her son John in the Johnson City district of Northumberland County, Pennsylvania, later settling in nearby Atlas.1 To help support his mother, John worked from an early age, leaving school after the fourth grade.2 The coal mining industry dominated the economy of Northumberland County. Borris remembered coal’s place in the community later in life: “Only the rich had gas. We had coal on ours, a coal stove.”3 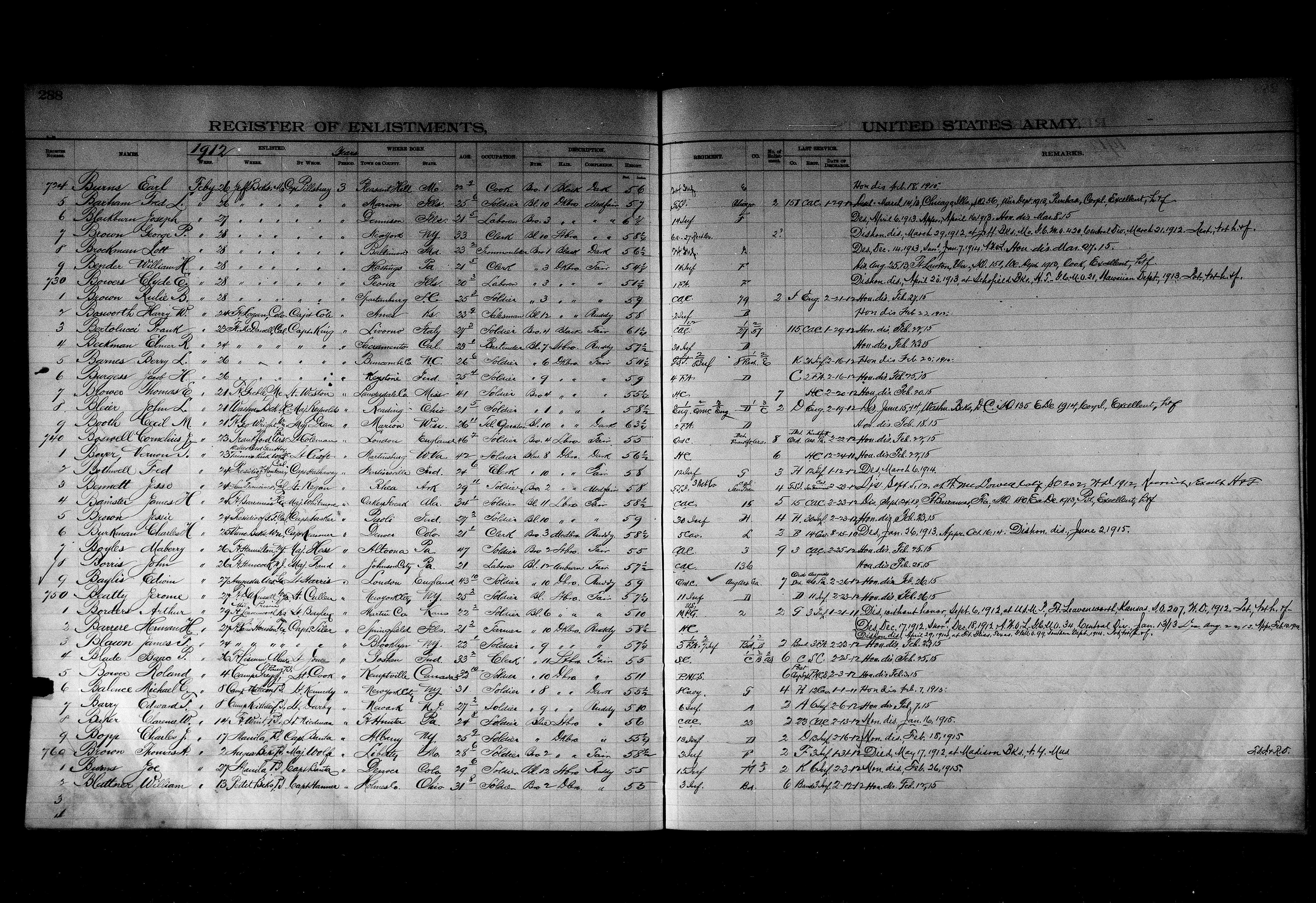 On February 26, 1912, Borris, at the age of twenty-one, enlisted in the U.S. Army at Fort Hancock, New Jersey. As seen here, he received his assignment as a laborer in the 136th Company which planted and tested mines.4 A few years after Borris’s entry into the Army, World War I broke out in Europe in 1914. After remaining officially neutral for nearly three years, the United States entered the Allied war effort against the Germans on April 6, 1917. While the French hoped the United States would integrate fresh soldiers into the lines, Woodrow Wilson insisted that American combat forces fight under American commanders. Thus, General John Pershing’s American Expeditionary Forces (AEF) included units like Borris’s 136th Company, which eventually served in several combat engagements in Europe.5 Borris’s unit became known as Company C, 1st Ammunition Train of the First Division. This unit broke through German defense lines in one of the bloodiest American engagements, the Meuse-Argonne Offensive (October 1, 1918 to November 8, 1918).6 Despite the relative inexperience of the men in his all-volunteer unit, Borris recalled that his company did not lose many men, due to the unit’s responsibility of unloading the ammunition for the artillery battery at night.7 Borris served overseas from August 7, 1917 to September 16, 1919.8

When the war ended on November 11, 1918, many soldiers like Borris did not return home until the next spring. General Pershing instituted sports contests and educational programs to pass the time, and Borris participated in various activities including the 1919 AEF boxing tournament. 9 After returning stateside, Borris received an honorable discharge on September 25, 1919 with commendations of bravery, efficiency, and devotion to duty. 10

In 1921, he returned to the Army at Fort Hancock once again. He served under the 7th Coast Artillery. He served in various capacities including a guard, train conductor, and the chief planter responsible for testing and observing mines.11 After injuring his back and laying in pain in a hospital, Borris became a professed Christian, remembering that “I had been a curser when I was in the Army before I met Christ…. after the injury I was a new man, new ideas and aspirations. I went about my duties with a new vigor and a new life taken over.”12 The Army discharged Borris for the second time on October 11, 1924.13

Borris then moved to Chicago where he met his wife, Irene Nehf. During the Great Depression, the Borris family lived with Irene’s parents Martin and Louise in Chicago. In 1931, John and Irene welcomed their first son Roger John Borris. Irene managed the home while John made a living for the extended family as a US Mail Carrier.14 Mail carriers maintained steady employment compared to other jobs during the Depression, but the job still brought challenges such as government employees taking a 15 percent salary cut and the postal service reduced in delivery services in 1933. Only after April 1935 did wages for government employees return to pre-Depression standards. This stability may explain why Borris stayed with the US Postal Service into the 1940s.15 Starting in 1934, he also received a World War I veteran’s pension from the state of Pennsylvania for $10 per month for 20 months.16 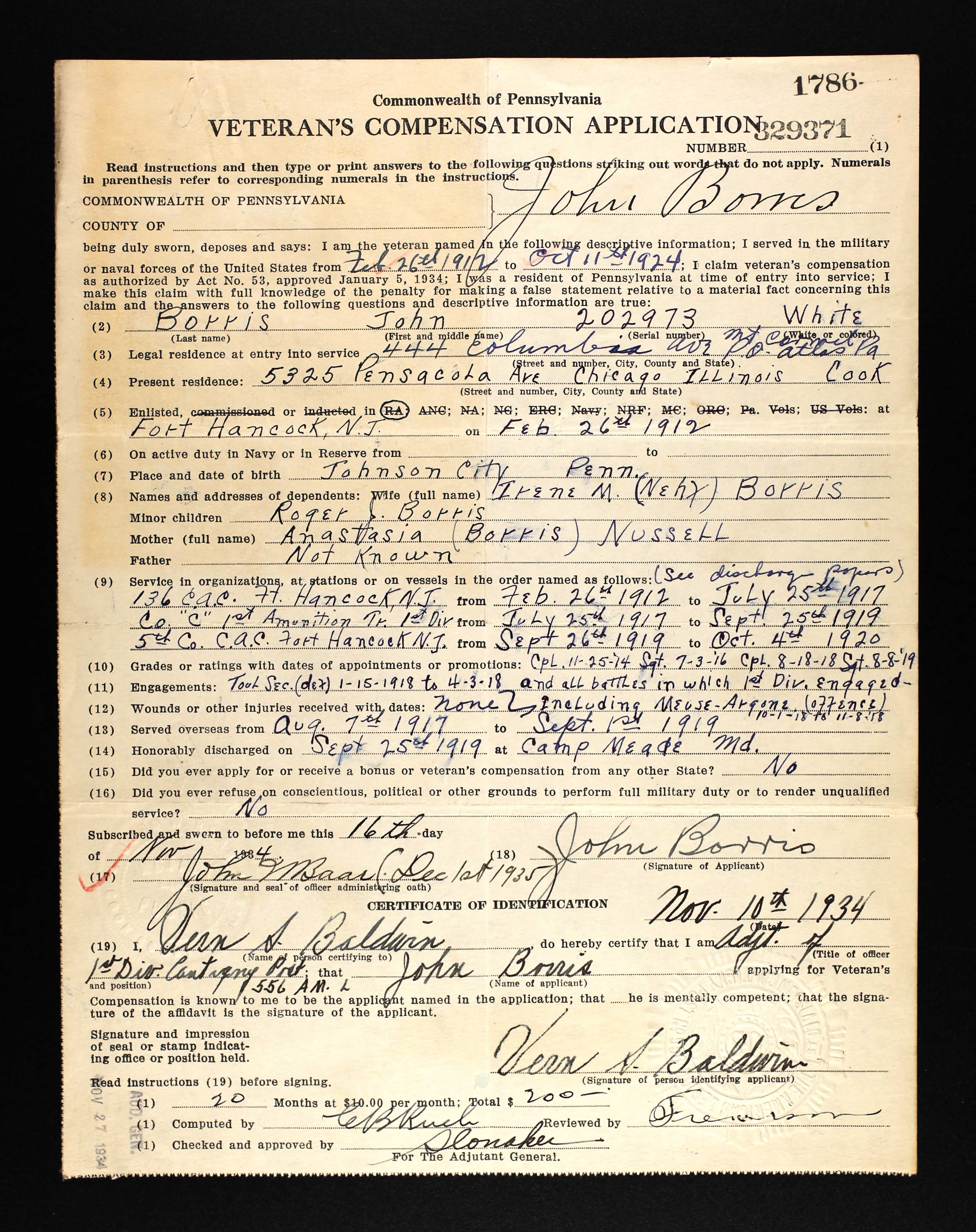 When the United States entered World War II, many men like Borris registered for the draft, though at the age of 51, his age disqualified him from serving in a military capacity.17 This draft commonly titled the “Old Man’s Registration” sought to measure the industrial capacities and skills of men between the ages of 45 and 64 for national service at home.18 During this time, the Borris family welcomed their second son David in 1942.19 After the war, the Borris family moved to Phoenix, Arizona, where John and Irene resided for around 40 years.20 In 1985, the National Park Service at Sandy Hook, New Jersey, reached out to Borris to record his experiences at Fort Hancock, which has become part of the National Park System. He gave two interviews on site in 1985 and 1986.21 By 1988, John and Irene moved to Lakeland, Florida, to be closer to their children who both lived in Florida.22 During his lifetime, he became a member of veterans’ organizations including the American Legion, the Veterans of Foreign Wars and the World War I Association.23 On June 11, 1994, John Borris passed away at the age of 103 leaving behind his wife Irene, his two sons, three grandchildren and four great-grandchildren.24 Nearly three years later, his wife Irene also passed away on January 11, 1997.25 They are buried together at Florida National Cemetery in Bushnell, Florida.