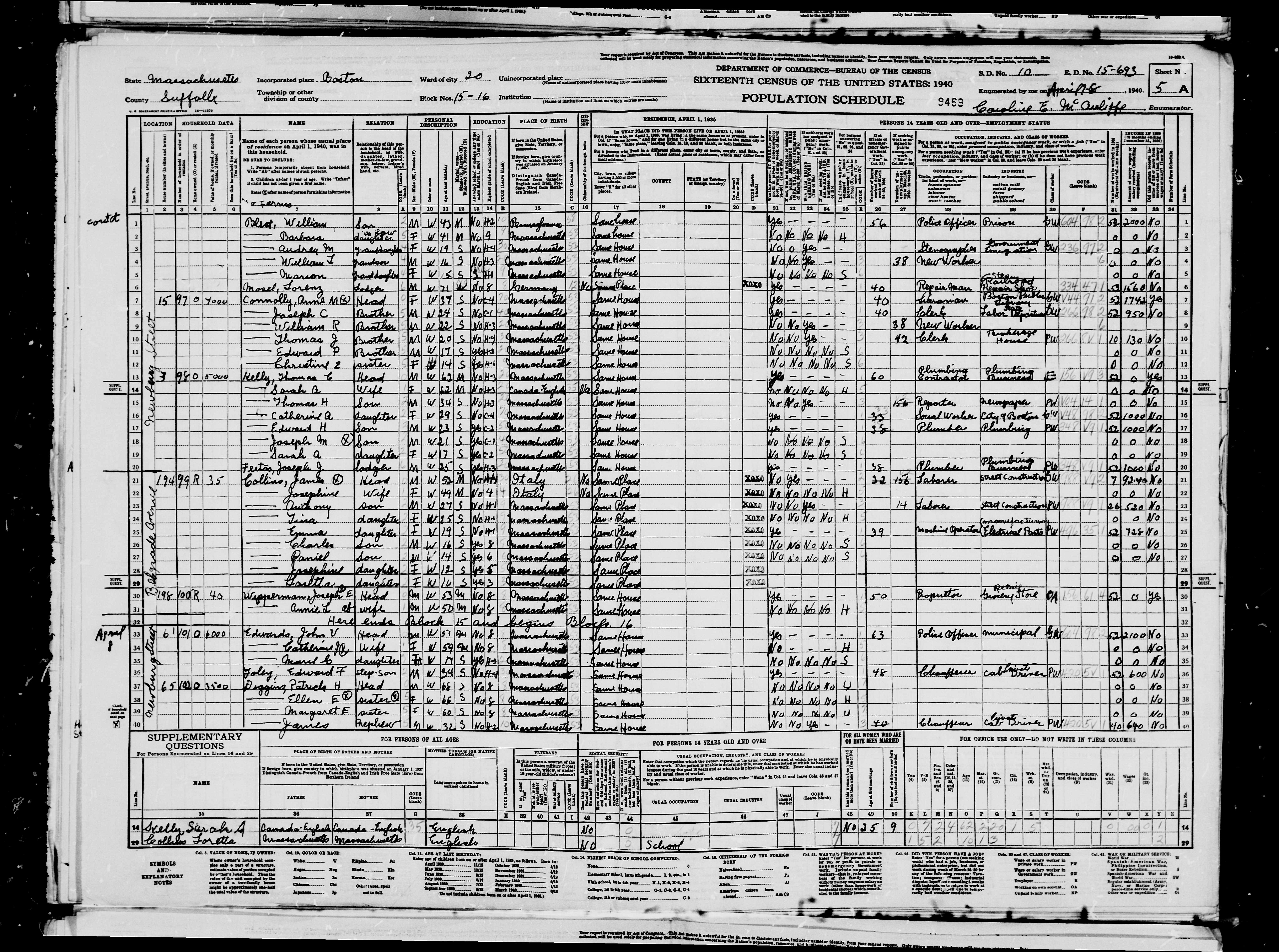 Edward Patrick Connolly was born October 31, 1922 to John and Emily Connolly in Boston, Massachusetts, the second youngest of seven siblings. 1 His father served as a Boston Police officer while his mother kept house. Edward’s father gained prominence from a January 21, 1915 chase and scuffle with a thief who attempted to pickpocket purses from several women before being apprehended. 2 On March 24, 1930, Edward’s father John died suddenly at the age of fifty-three in Saint Petersburg, Florida, leaving Emily a widow and the Connolly children fatherless. 3 With Emily’s passing during the Depression, Edward’s oldest sister Anne took charge of supporting the family as the head of the household. While one in four workers were unemployed in the early years of the Depression, “women jobs” (nurses, teachers, secretaries, and clerks) increased. 4 Anne worked as a librarian at the Boston Public Library while another of Edward’s sisters, Theresa, worked as a clerk at an insurance company. The 1940 US Census, shown here, indicates that Edward’s brothers Joseph and Thomas were also employed as clerks. 5

As World War II broke out in 1939, the United States, while remaining neutral officially, supported the Allied Powers against Nazi Germany. However, the attack on Pearl Harbor by Axis Power Japan on December 7, 1941 saw the United States declare war on Japan, leading to thousands of young Americans enlisting in the military. Upon his enlistment in the US Marine Corps on December 26, 1941, Connolly became one of 15,000 men who joined the military, including over 2,400 in the Marines by February 1942. 6

Before World War II, the Marines built a tradition of fighting America’s “small wars” south of the US border. However, as the Marine Corps became the Navy’s primary army for fighting in the Pacific Theater, it brought the Marines to greater prominence. 7 As a young man, Edward Connolly was suddenly thrust into a new environment in the Pacific, far from his home in Massachusetts. The geography of the battlefield often dictated the Marines’ operations abroad, resulting in the Marines primarily engaging with the Japanese who could not muster combat power like the Germans could. 8 The Marines’ practice of war often involved “short, direct, intense, bloody combat” like the Battle of Iwo Jima, made famous by the picture of six Marines raising the American flag over the victorious battlefield. 9 The war with the Japanese lasted until September 2, 1945, when Japan surrendered following the <../../popups/atomicbomb.html" rel="modal:open">atomic bombing of Hiroshima and Nagasaki and the Soviet declaration of war against them the previous month. Victory over Japan Day (V-J Day) saw worldwide celebrations of the war finally coming to an end in the Pacific. Later in the year, at the age of twenty-three, Edward Connolly concluded his military service in the Marine Corps on December 26, 1945 with the rank of corporal. 10 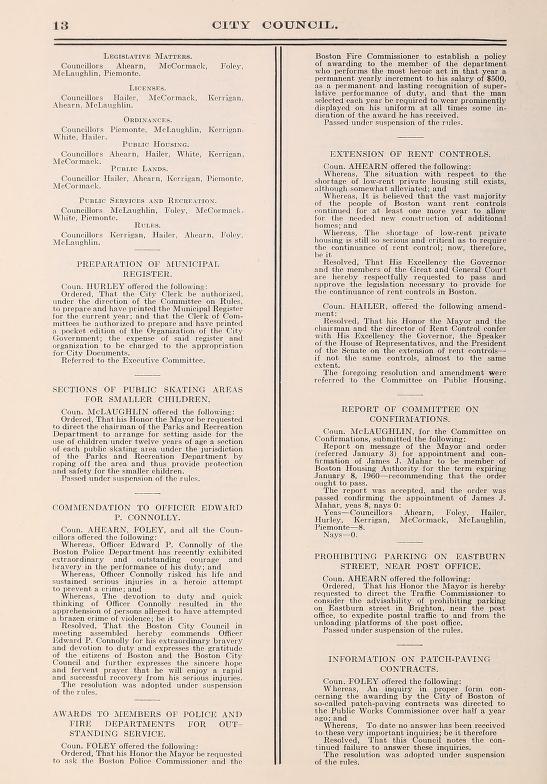 After his release from the Marine Corps, Connolly returned to Massachusetts where he met and married the former Thelma Snell. They later had two sons, Kevin and Mark. Connolly followed in the footsteps of his father by becoming a police detective. 11 Late one evening in January 1955, he was shot in the chest while preventing a group of five gang members from robbing the Astor Theater of $1,000. Although critically wounded, Connolly fired back and chased them until other officers came on the scene. All five of the gang members were captured. However, the injuries from the shooting forced Connolly to retire from the police force. 12 A few days later, on January 10, the city of Boston commended Connolly for his heroism. His commendation can be seen here. 13 On May 25, 1956, the City of Boston authorized an act giving an annual pension in monthly installments to Connolly for his heroics which left him disabled. The pension issued was to be equal to the rate he received as compensation upon his retirement from the police force. If he died, a pension would be paid to his wife Thelma of $1500 a year and increased by $312 for each child of the couple up until the age of majority. 14

Connolly would later retire, eventually moving to Florida in 1982: first to Fort Lauderdale and then Brevard County. 15 He was a member of the American Legion and Veterans of Foreign Wars. On September 7, 1995, he passed away at home at the age of seventy-two. 16 He is buried at the Florida National Cemetery near Bushnell, Florida.

13 Reports of Proceedings of the City of Boston in the Year Commencing January 3, 1955, and Ending December 29, 1955 (Boston: City of Boston Administrative Services Department, 1956), 13, http://archive.org/details/reportsofproceed19552bost.