On August 5, 1919, Walter and Minnie Woznak gave birth to their son William in Montreal, Canada, the third of five children. The family included his two older brothers Alex and George, and two younger sisters Olga and Lillian. According to the 1930 Census, William (line 16) and his family immigrated to the United States from Canada shortly after his birth. The family settled in Michigan in 1919. William’s father Walter immigrated to Canada from Russia while his mother Minnie, a Ukrainian, came from Austria. 1 For several centuries up until the end of World War I in 1918, the Austrian Habsburg monarchy controlled the western portions of what is today the Ukraine. In addition, due to overpopulation in the late nineteenth and early twentieth centuries, large numbers of Ukrainians migrated to Canada and the United States. 2 Thousands migrated from Russia to North America in the late nineteenth and early twentieth centuries for various reasons: peasants sought industrial jobs, Russian Jews fled persecution, and Russians left in the aftermath of the Bolshevik Revolution. 3 After immigrating to the United States, Walter Americanized his name from Wladimir Wozbraniuk to Walter Woznak. 4

Upon immigrating to the United States, both Walter and Minnie learned to speak, read, and write in English. While the children spoke their mother’s native Ukrainian as their first language, they also learned English. 5 Woznak’s parents filed their first papers for citizenship in 1930. By 1940, the entire family joined the ranks of naturalized Americans. 6 Growing up in Michigan in the 1920s and 1930s, Woznak’s father worked in an auto factory as a laborer, and his mother remained at home as a housewife. During this time, the family lived in Macomb County, just north of Detroit. 7 In 1932, the family experienced tragedy. Woznak’s younger sister Lillian, born in 1927, died from complications of diphtheria in 1932, a disease caused by thick bacteria in the back of the throat and considered highly contagious. 8 By 1940, the family moved to Detroit where the census recorded Woznak’s parents as farm workers, with his father listed as a truck farmer, and his mother listed as a farm helper. Woznak and his siblings, apart from Olga, and a boarder named John Povibriki, also worked. Woznak (line 63), at 20 years of age, worked as a draftsman in an auto factory where he earned $450 yearly. 9

In the aftermath of the Pearl Harbor attack on December 7, 1941, thousands of young men registered for the draft. Woznak joined the United States Army on January 6, 1942, in Detroit, enlisting in the Air Corps. 10 He eventually received an assignment to Wendover Field in Utah as part of the Repair Squadron. 11 Woznak’s prior experience working in factories served him well at Wendover, a site where the Army Air Corps trained B-17 and B-24 heavy bomber crews. Wendover Field played an important role in the American war effort; twenty-one bomber groups and over one thousand air crews completed training at this location. Some of the trainees at this base received the Medal of Honor as many participated in the strategic bombing in Germany, flying support on D-Day, and other combat missions around the world. 12 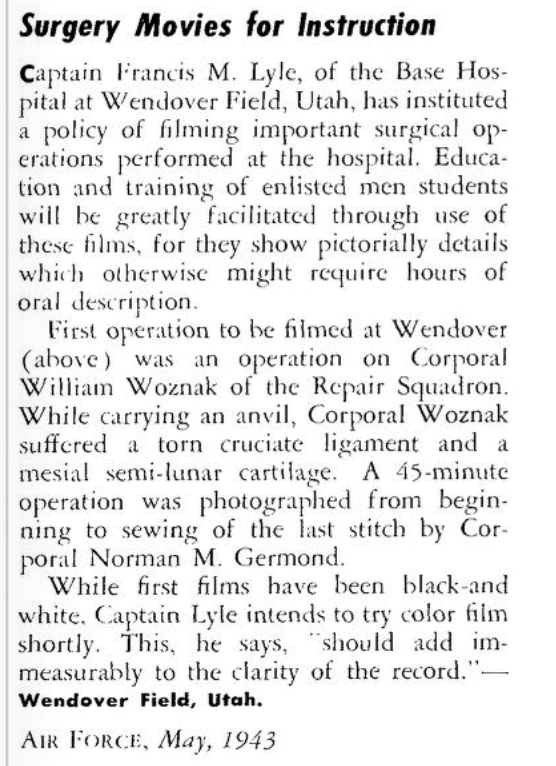 Woznak repaired aircraft and other damaged equipment. On one occasion in 1943, Woznak demonstrated the dangerous nature of this work by injuring himself while carrying an anvil, tearing a cruciate ligament and a mesial semi-lunar cartilage. The Air Force Magazine featured Woznak, now a corporal, in May of 1943, in a report on the first filming of a surgical operation performed at the Base Hospital at Wendover. Corporal Norman M. Germond recorded Woznak’s forty-five minute operation. 13 Woznak continued to serve in the Air Corps until the end of the war in September of 1945. On October 18, 1945, the Army honorably discharged Woznak. 14 He left the Army with the rank of sergeant.

After the war, Woznak returned to Michigan, living in various Detroit suburbs. On June 9, 1951, he married Elizabeth Beatrice Genick in Hamtramck. 15 The family later moved to nearby Birmingham, Michigan, where Woznak worked as a sheet metal worker in 1954. 16 However, the Woznak family soon moved south to Naples, Florida. The 1950s through 1970s saw a slowing or declining of populations in northern cities like Detroit coinciding with large rises in populations for the Sunbelt region of the South and West, especially Florida. 17 Woznak switched professions, starting a career as a realtor and building consultant. In September of 1971, The Naples Daily News reported the couple planned to construct a new townhouse complex in the city known as Madison Manor. 18

William and Elizabeth settled down, eventually giving birth to three children Marian, Bill, and Walter. The The Naples Daily News covered their twenty-fifth anniversary at the Marco Beach Hotel. 19 Woznak and his family took an active role in their local community. Woznak worked for about a year for the Marlowe & Marlowe Inc. company of realtors in 1975 and 1976. His wife Elizabeth worked for the State Department of Commerce, Unemployment Compensation Division. 20 The local news reported his activities including bowling, giving blood, and hosting the Young Democratic Club meetings in his household. 21 Woznak passed away on January 28, 1997, and a headstone of memory stands in honor of service to this country at the Florida National Cemetery in Bushnell, Florida. 22 Coming to America for a better standard of living, Woznak embodies the American Dream and is remarkable for his willingness to use his skill sets in service to his new country.