William R. Charette, born on March 29, 1932, grew up in the community of Ludington, Michigan, located on Lake Michigan.1 After the death of Charette's parents at five years old, an uncle took over his care until called upon for service in World War II due to his unmarried status.2 A great uncle, Charlie, subsequently took over Charette’s upbringing, raising him on a dairy farm in rural Ludington.3 Living on the chain of Great Lakes in North America, Charette worked on ferry boats and merchant marine cars as a summer job, so he was familiar with sailing and shipping operations.4 Although Charette obtained employment after high school, he decided to enlist in the military. At this time, Life Magazine’s December 1950 issue highlighted the struggles over the Chosin Reservoir, which saw some of the most intense combat of the Korean War. As a result, Charette, along with many in his peer group, found enlistment to be an appealing option.5 Charette’s experiences aboard ships of the Great Lakes may have inspired him to be a sailor.6

Service: Years in the US Navy

Charette enlisted for service on January 10, 1951, and began basic training at the Naval Station Great Lakes later that same month.7 Like many others, Charette volunteered for service, while a nearly equal amount of recruits were drafted. Together, the volume of recruits at Naval Station Great Lakes nearly equaled the number of recruits during the peak of World War II.8 After being identified for service as a Hospital Corpsman, Charette attended the Hospital Corps School in Bainbridge, Maine, and volunteered for duty with the Marines as a part of the Fleet Marine Force.9 Upon completing Field Medical School, a course designed to provide training in the application of hospital medicine in battle as well as a crash course in infantry tactics, Charette was sent to Camp Pendleton, California and attached to the 7th Marine Infantry Regiment.10 Charette was part of a rapid expansion taking place in the US Armed Forces between 1950 and 1953 due to the Cold War.11 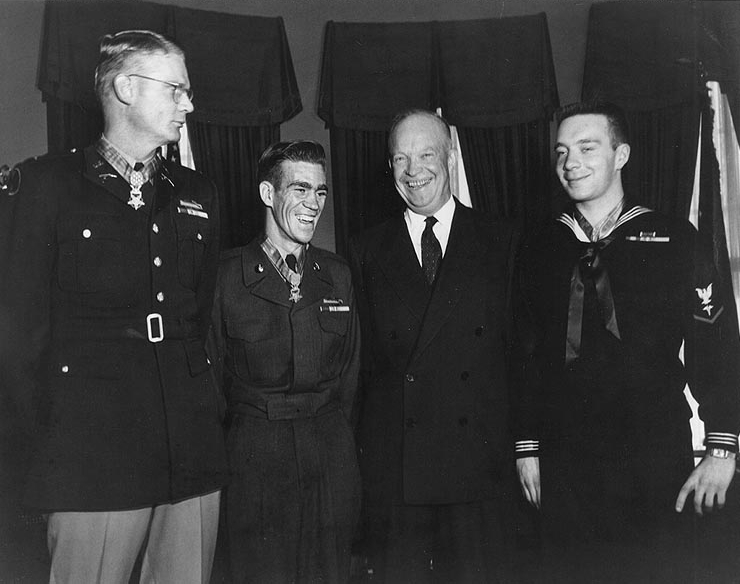 Within two months of arriving in Korea in January of 1953, Charette’s unit came under hostile small-arms and mortar fire, resulting in multiple casualties. Charette repeatedly exposed himself to enemy fire, sustaining multiple injuries while rendering medical assistance to wounded comrades. At one point, Charette protected a Marine from an enemy grenade, using his own body to absorb the blast. When his medical equipment was destroyed in the blast, Charette continued rendering aid to his and adjacent units by tearing up his uniform to use as bandages and gauze. At great peril to his own personal safety, Charette passed off his battle vest to another wounded individual and exposed himself to gunfire to evacuate a critical victim for more effective aid. Many men directly credited Charette with saving lives and inspiring others to eventual victory in routing the North Korean and Chinese forces.12 For his actions on that day, Charette’s commander immediately notified him that he had been recommended to receive the Navy Cross, an award upgraded to the Medal of Honor, which President Eisenhower presented to him on January 12, 1954.13 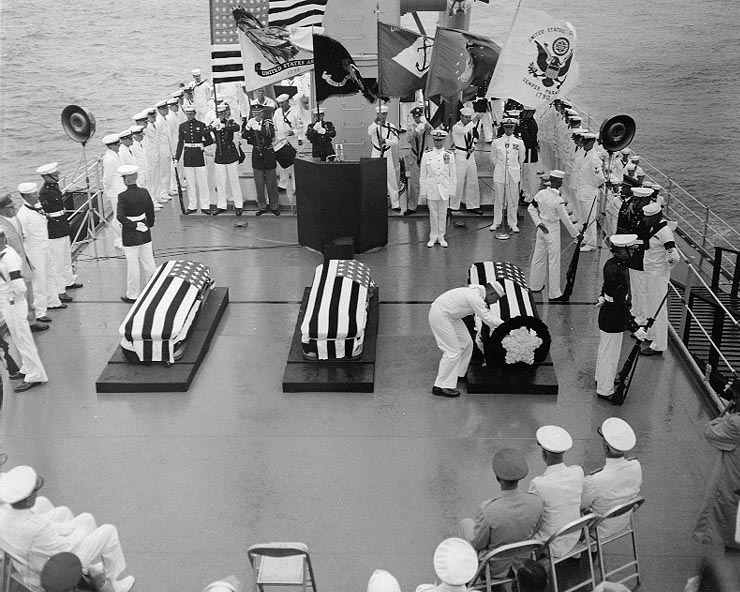 After Charette’s service in the Korean War and a short period as a civilian, Charette chose to re-enter the Navy and continue his career.14 As the only active-duty Navy enlisted recipient of the Medal of Honor in 1958, Charette’s prestige granted him the final decision in selecting which particular Unknown Soldier from World War II would be interred at the Arlington National Cemetery tomb in Washington, D.C. The Unknown Soldier ceremony took place aboard the USS Canberra, and the unselected candidates received a burial at sea.15

Charette spent his career in the Submarine and Hospital Services, first serving aboard the USS Quillback, a conventional submarine, and later attending nuclear power school for positions aboard the nuclear submarines USS Triton, USS Daniel Webster, and USS Simon Bolivar.16 Charette took part in developing nuclear intercontinental ballistic missile systems, a key in the establishment and maintenance of a nuclear deterrence strategy designed to foster a sense of mutually assured destruction between the USSR and US during the Cold War.17 Charette’s military career led him to Florida where he served in the Orlando Naval Hospital and Orlando Recruit Dispensary. Through his hospital work, Charette was directly involved with sailor health and readiness, while his work at the recruit dispensary prepared future generations of sailors for service. The recruit dispensary in Orlando is the final position Charette held in the Navy before he retired to the nearby town of Lake Wales, Florida on April 1, 1977 after twenty-six years of service.18

During retirement, Charette remained active and involved in national organizations such as The Elks Lodge Chapter 158, the Congressional Medal of Honor Society, Korean War Veterans Association, Lake Wales VFW, USS Sea Poacher Association, Fleet Reserve Association, Florida Chief Petty Officer Association, and others.19 In April of 1999, a Naval medical facility opened at Portsmouth, Virginia named the Charette Health Care Center. Charette passed on March 18, 2012 after suffering complications from heart surgery. He was preceded in death by one son, and survived by three daughters, and one son. On March 22, 2012, William R. Charette was buried in Florida National Cemetery, Bushnell, Florida. His wife of fifty-eight years, Louise Fraiser Charette, passed away on March 26, 2016 at the age of 81 and joined William at his burial site in Bushnell. His legacy continues through his extended family, namesake organizations and medical center, as well as the many sailors who received their entry level training under his supervision.20

11 NSC 68 was issued in April of 1950 and was the conclusion of a broad assessment into political and strategic positioning spurred on by US loss of nuclear monopoly in 1949. NSC 68 recommended rapid expansion of military personnel and budgets. Interview with William R. Charette, sec. 0810; Allan Reed Millett and Peter Maslowski, For the Common Defense: A Military History of the United States of America from the Revolutionary War through Today, Rev. and updated (New York: Free Press, 2012), 462–65; Russell Frank Weigley, The American Way of War: A History of United States Military Strategy and Policy, Indiana University Press paperback ed, The Wars of the United States (Bloomington: Indiana University Press, 1977), 394–97, 346-347; James A Huston, The Sinews of War: Army Logistics, 1775-1953 (Honolulu, Hawaii: University Press of the Pacific, 2004), 623, 646; Richard W. Stewart and Center of Military History, eds., American Military History Volume 2: The United States Army in a Global Era, 2nd ed, vol. 2, Army Historical Series (Washington, D.C: Center of Military History, United States Army : 2009) 216, 261-262.